What Delacroix taught the Moderns: Beth Wright on Delacroix and the Rise of Modern Art

"The first merit of a painting is to be a feast for the eye,” the French Romantic painter Eugène Delacroix (1798–1863) noted in a journal the year of his death. The second merit, perhaps, was for the painting to be influential—which Delacroix's work was, enormously. Delacroix and the Rise of Modern Art, a stunning exhibition at the Minneapolis Institute of Art, shows how and why he was a catalyst for the art that followed in his wake.

Delacroix liberated painting from the requirement that it replicate colour, form and light as we see in the real world. He used these elements expressively, with prismatic color and open brushwork, to communicate his comprehension of the great subjects of religion, literature and history, as well as to record his responses to the beautiful forms of nature. Paul Cézanne’s comment to his patron Joachim Gasquet that “we all paint in his language” is borne out here. Leading artists in every style—from Orientalism, Impressionism and post-Impressionism to Neo-Impressionism, Symbolism and Fauvism—demonstrate Delacroix’s influence on their themes, colour palettes and paint application. Paul Signac claimed Delacroix's work as the foundation of Divisionism and Pointillism. Henri Matisse throughout his career maintained an interest in Delacroix’s subject matter and vivid colour choices and travelled to Morocco in 1912, just as Delacroix had done in 1832. Pierre-Auguste Renoir took the trip himself in 1881.

In the galleries, Delacroix’s expressive representation of subjects from literature and religion appear with works by Gustave Moreau, Vincent van Gogh and Paul Gauguin. Odilon Redon praised Delacroix’s ability to evoke the subjective essence of meaning through colour. Delacroix’s delicate skein of brushstrokes and use of complementary colours are similarly found in works by Renoir and Claude Monet, which celebrate the shimmering movement of light on golden embroidery or tumbling seas.

Delacroix’s significance became increasingly dominant as later artists had access to his work. It was already on view in museums and murals in Paris, and graphic media were widely available. In 1864 both the memorial exhibition following his death and the sale of works from his studio had an immediate impact on the Impressionists. Monet was present when an ovation hailed the sale of Delacroix’s Sea at Dieppe (1852), which resembles Monet’s seascapes of 1864-65. A similar impact on the next generation of post-Impressionists, particularly on Van Gogh, occurred in response to the retrospective exhibition organized in 1885 to raise funds for Jules Dalou’s monument honoring Delacroix. Collectors and dealers introduced their protegés to Delacroix’s work, and many artists became collectors themselves. Edgar Degas, for example owned 57 watercolours, 190 drawings and 13 oil paintings by Delacroix, including a preparatory sketch for The Battle of Poitiers (1829). Finally, the publication of Delacroix’s journal and his essays on art in the 1890s were especially important for theorist-artists like Signac, Georges Seurat and Wassily Kandinsky. 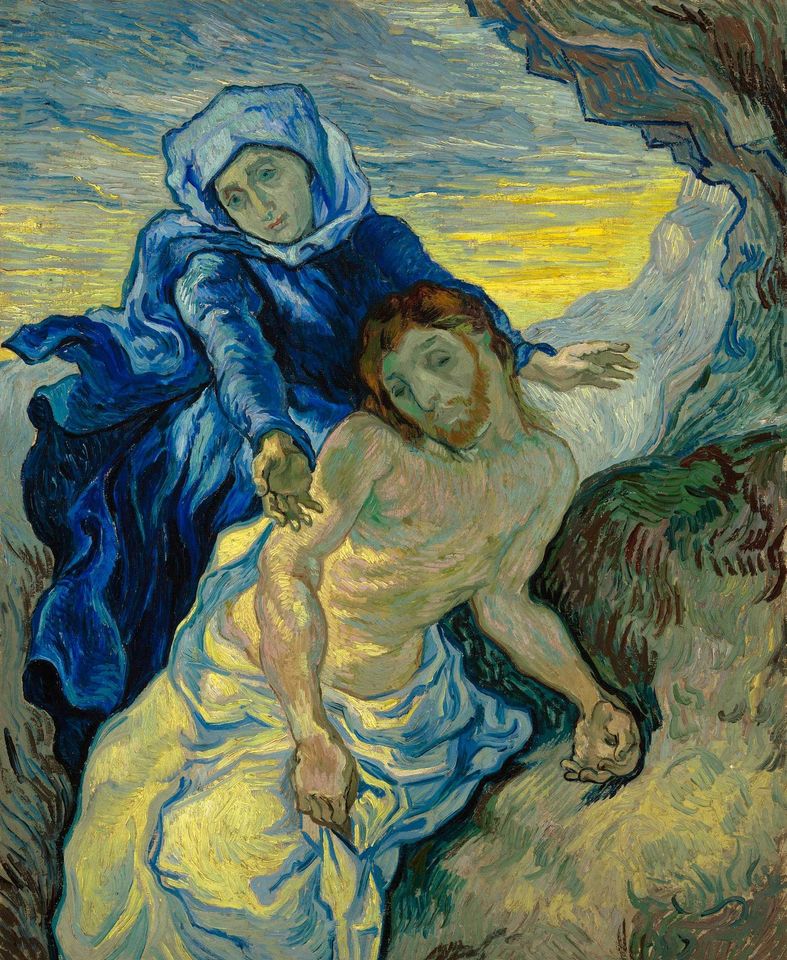 The show includes works from Delacroix’s entire career, from his Portrait of Louis-Auguste Schwiter (1826) to Arabs Skirmishing in the Mountains (1863) and even the dazzling replica he painted for his own Death of Sardanapalus (1846). We are given a sense of his protean activity in practically every medium. A video allows us to virtually walk through his grandiose public murals, represented here also by a preliminary sketch of Apollo Slaying Python (around 1850) for the Louvre ceiling in the Galerie d’Apollon—a work that would elicit a direct response from Redon, in his Pegasus and the Hydra (around 1907).

While the show includes several copies, in the majority of the works, the followers are in dialogue with the master. We see artists learning how to become themselves through Delacroix, as when the delicate touches of golden embroidery in his The Bride of Abydos (1857) recur in Renoir’s portrait of Madame Clémentine Valensi Stora (L’Algérienne) (1870). Édouard Manet requested Delacroix’s permission to copy his Barque of Dante (around 1854), which was the only contemporary work Manet ever copied. Despite Delacroix’s recommendation that he study Peter Paul Rubens, Manet applied Delacroix’s saturated colours as  matte tones to flatten the forms. Manet’s emerging aesthetic is especially evident when this work is compared with Delacroix’s own copy after a scene from Rubens’s Medici cycle (around 1825-30), with its full forms and illusionistic textures. Delacroix’s integration of Rubens into his Christ on the Cross (1853), where Mary Magdalene appears in a green robe with sombre red drapery, prepares us for Van Gogh’s ecstatic interpretation of Delacroix’s Pietà (around 1889), in which delicate touches of pink and green appear on the body of Christ. Van Gogh had appreciated how Delacroix’s Christ on the Sea of Galilee (1853) spoke “a symbolic language through colour itself,” as he explained to his brother Theo in a letter of 26 June 1888.

Delacroix’s address to the eye and the soul have continued to influence artists. Robert Motherwell’s graduate study at Harvard in 1937-38 centered on Delacroix’s journal and he described the artist as “a sustaining moral force in my inner life.” Pablo Picasso painted 15 variations on Delacroix’s Women of Algiers in Their Apartment (1954-55). The Chinese artist Yue Minjun, responding to Tiananmen Square’s tyrannical repression, quoted Delacroix’s 28 July: Liberty Leading the People (1830) in his Freedom Leading the People (1995-96).

In a journal entry from 29 January 1857, Delacroix described painting as “a bridge between the mind of the painter and that of the spectator.” Those who are eager to enter into a dialogue with this great artist and his many magnificent emulators will find themselves greatly rewarded.

Beth S. Wright is Professor of Art History at the University of Texas at Arlington.

Delacroix and the Rise of Modern Art, Minneapolis Institute of Art, until 10 January. The show travels to the National Gallery, London, from 17 February-22 May