Where have all the artists in central London gone?

Property price rises and rapid redevelopment in the capital are forcing artists to seek studio space in the suburbs and beyond.

“We have reached tipping point,” says Gregor Muir, the executive director of the Institute of Contemporary Arts (ICA) in London. “Development and gentrification are consuming the centre of our city. We need to flag up our concerns, take stock and remind each other to not go too far in one direction.”

Artists across the city are being priced out as cheap space disappears. Muir, who has co-organised Frieze London’s programme of talks this year, including a discussion on Friday about whether artists can still afford to live in the capital, says that London’s cultural landscape has become almost unrecognisable since his involvement with the Young British Artists (YBAs) 20 years ago.

Much like emerging artists today, the YBAs came of age during a recession. But the effect of the financial crisis on artists was very different in the early 1990s. “The last recession involved the freeing-up of enormous amounts of space, notably in the East End. Now it’s quite the opposite,” Muir says. “With my generation, it was about taking over warehouses, painting them up and treating them as if they were really huge, expensive galleries.” He has written on this subject in his introduction to a new book about creativity in the capital, London Burning: Portraits from a Creative City, by Hossein Amirsadeghi and Maryam Eisler.

Most artists in the 1990s depended on social security. Muir, who went on to become a curator at the Tate, says he also survived by signing on. “With the safety net of benefits, you could take risks,” he says. “Now artists are operating in a culture where you can barely rent your own flat.”

Forced out of Bermondsey

Widespread residential development is not only pushing up living costs, but also creating a shortage of affordable artists’ studios. Last year it was announced that a former biscuit factory in Bermondsey, south London, is up for development, forcing almost 400 artists to look for studio space elsewhere. Cremer Street Studios in Hackney, east London, which houses 200 artists, is the next space due to close in the name of regeneration.

Up to 30% of artists’ studios in London are at risk of disappearing in the next five years, according to a report published by the Mayor of London’s Office in September 2014. A follow-up report, due to be published at the end of this year, will look at ways of financing studios.

These might include low-interest, long-term loans for cultural organisations or “other types of investment vehicles supported by private funders”, according to Munira Mirza, London’s deputy mayor for education and culture. She says that the mayor’s office is also flexing its planning muscles. “We can, in some cases, protect [studios] by insisting that developers replace like with like,” she says. “But we have also started to support the creation of new spaces using our own regeneration funding.”

There are further plans, Mirza adds, to broker introductions between developers and cultural organisations looking for spaces. A temporary deal has already been struck between the property developer St George and the educational charity Bow Arts, which has taken over part of News International’s former home in Wapping for an initial five-year term. Bow Arts has transformed the building, which dates from the early 19th century and was once a rum factory, into studios for 90 artists. It is a model that Marcel Baettig, the charity’s chief executive, hopes to replicate. “Development of the whole site continues until around 2028,” he says. “So we have until then to find new opportunities with St George.”

Katharine Stout, the head of programme at the ICA, who is taking part in the Frieze talk, sounds a note of caution when it comes to more permanent solutions. Incorporating studios into developments, she says, “has to be done in a way that’s for the benefit of artists and not just for profit”.

Artists in search of studio space are looking to the capital’s outer boroughs and beyond. Catford and Woolwich in south London, once deemed undesirable, are attracting artists priced out of nearby Peckham, a neighbourhood that has been transformed in the past 18 months. There are also thriving art scenes in the regions, and there is some evidence to suggest that artists are drifting towards Ramsgate, Margate, Deal, Norwich and Birmingham, among other locations. 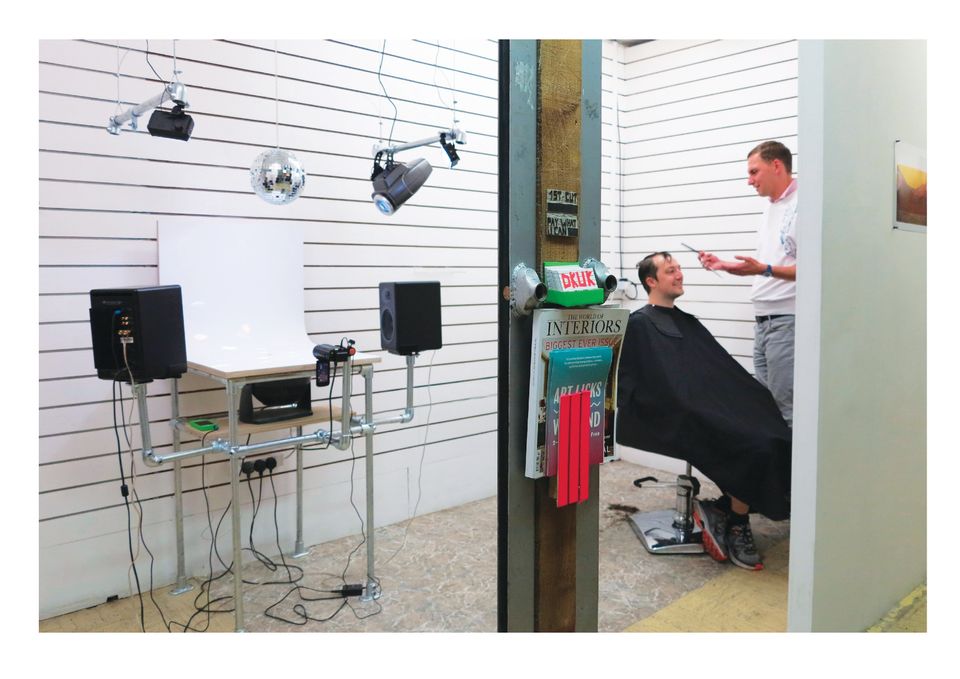 Jack Strange’s It Want It (2015) on show at DKUK in Peckham. The hair salon doubles as a gallery. Photo courtesy of Daniel Kelly

They could look even further afield. Muir asks: “Is it necessarily true that people who can’t afford to live in London then go to live somewhere else in the UK? Or do they then decide that they may as well join the thousands of artists who have settled in Berlin and who may now also be settling in Los Angeles?”

In places such as Peckham, Park Royal in west London and Seven Sisters in the north of the city, some positive stories have emerged. Even in rapidly gentrifying Vauxhall, where last week Damien Hirst opened his Newport Street Gallery in former warehouses, a few fortunate artists have enjoyed residencies at Gasworks. Founded in 1994, the non-profit organisation reopened last month after a refurbishment. The management was given the rare opportunity to buy the freehold of the building, near the Oval cricket ground, for £1.1m, thanks to a grant from Arts Council England (ACE); building works cost a further £1m.

The London-based Filipino artist Pio Abad has just started a five-year tenancy at Gasworks after several short-lived stints in studios including the former biscuit factory in Bermondsey. The factory’s demise as an affordable space for artists “affected the whole ecology of artists in London”, Abad says. “Everyone was in there, from recent graduates to Phyllida Barlow, who was working on her [Tate Britain] Duveen commission.” By contrast, his studio at Gasworks is “the artist’s equivalent of job security”. Rents are charged at the subsidised rate of £12 per sq. ft (the market rate is estimated at between £15 and £30 per sq. ft). As well as providing long-term studio space for UK-based artists, Gasworks offers short-term residencies to others from around the world.

The majority of emerging artists do not have the support of a commercial gallery. “We are really about launching careers,” says Alessio Antoniolli, the director of Gasworks, adding that many artists leave with representation. Two former residents were picked up by Thomas Dane Gallery and another by Stephen Friedman Gallery.

Other artists, however, shun the traditional gallery model. Daniel Kelly opened DKUK last year in a shopping arcade in Peckham, where his hair salon doubles as a gallery. Kelly, who trained as a hairdresser before studying painting, recently won ACE funding. “The more I understood about the commercial art world, the less I wanted to be a part of it,” he says. “I’m interested in showing work to as wide a range of people as possible.”

For the past two years, he has taken part in Art Licks, a London-wide festival featuring emerging artists and young galleries, many exhibiting in unusual locations such as a mother’s car and a café, and on a billboard. Holly Willats, the event’s founder and director, says that it is “critical” to support artists in the early stages of their careers, even if it is like “diving into the unknown”.

Foreign investors and super-wealthy non-doms are often blamed for London’s overheated property market. The lights are said to have gone out across swathes of Mayfair, Kensington and Chelsea, where non-doms have bought up houses and flats but have not moved in. Rising prices have had a knock-on effect on galleries, with some dealers reporting quadruple rent increases at a time when footfall is decreasing.

Others see the picture as more complex, however. “Some of those who treat London as a base bring a certain international patronage that benefits the arts in different ways,” says Katharine Stout, the head of programme at the ICA. Non-doms have been among the most generous supporters of gallery expansions, including Tate Modern, for example.