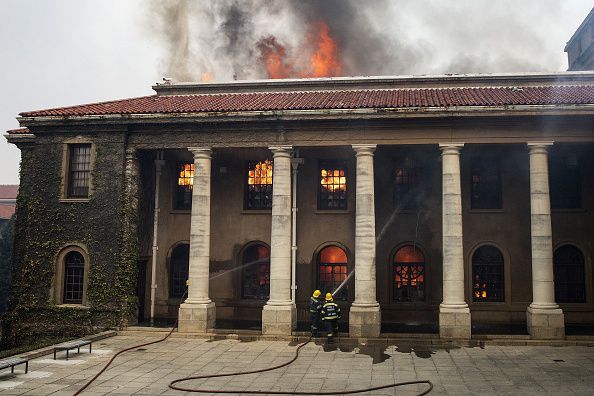 Firefighters try, in vain, to extinguish a fire in the Jagger Library, at the University of Cape Town, after a forest fire came down the foothills of Table Mountain, setting university buildings alight in Cape Town, on 18 April Photo: Rodger Bosch/AFP via Getty Images

A fire has engulfed part of the University of Cape Town (UCT) in South Africa, “gutting” the Reading Room of the institution’s Jagger Library, writes Ujala Satgoor, the UCT library executive director, on Twitter. Around 4,000 students were evacuated yesterday after a wildfire on the slopes of Table Mountain spread to the campus.

A message from @UCTLibrary Executive Director Ujala Satgoor on the fire that devastated the Reading Room of the Jagger Library where @UCTLibrary_SC situated. pic.twitter.com/yj8c9NbA7O

The library houses the university’s special collections comprising valuable archival material such as anti-apartheid documentation, manuscripts and one of the world’s largest African film collections.

A commentator on Twitter, described as a rare book collector, says that “aside from priceless early materials, this is one of the great repositories for archives and documents of anti-colonial and liberation movements in South Africa”.

As a young man, I spent many happy hours in the Jagger library. Aside from priceless early materials, this is one of the great repositories for archives & documents of anti-colonial and liberation movements in South Africa and elsewhere in Africa. This is irreplaceable material. pic.twitter.com/KZRBJ60oax

It is unclear which parts of the collection have been saved, however. Satgoor wrote that “some of our valuable collections have been lost; however a full assessment can only be done once the building has been declared safe... as some of us watched, from on site, with horror and helplessness this elegant and historical library burn, I can only imagine the shock and horror you must have felt as you watched the news reports and pictures of this destruction.”

The activist and writer Patric Tariq Mellet raised concerns about his archive housed at the library, numbering 1,500 publications he printed in exile running the Liberation Movement printing press. “It was a comprehensive record of my productions as a litho-printer... my contribution of printing day and night over all of those years. With everything that I printed I archived one copy,” he wrote on Facebook. “I believed that the African Studies Library [Jagger Library] was one of the most secure archival institutions and also accessible to any researcher.”

This is potentially a cultural tragedy happening as we watch in horror - I know this library quite well - if it has indeed been destroyed, the losses are incalculable, from incunables to priceless Africana. https://t.co/9kRHZWrRma

Dan Plato, the mayor of the City of Cape Town, told the Guardian that it is tragic that literary treasures have been lost at the UCT library, but some of the most valuable works were saved by the quick activation of roller doors. “Our attention and support remains with firefighters and all role players working to protect further loss of property,” he adds.

Table Mountain national park fire manager Philip Prins says in a statement that “the origin of the fire is from a vacated vagrant fire”. He described how the blaze spread rapidly in the direction of the Rhodes Memorial on the slopes of Devil’s Peak because of the "very old pine trees and their debris” in the area.