Wildfire spread close to the Getty Center, but an official says the art is ‘just fine’

The campus in the Santa Monica Mountains was designed to resist fire, with a powerful irrigation system, million-gallon water tank and air conditioning that pushes smoke out instead of letting it in 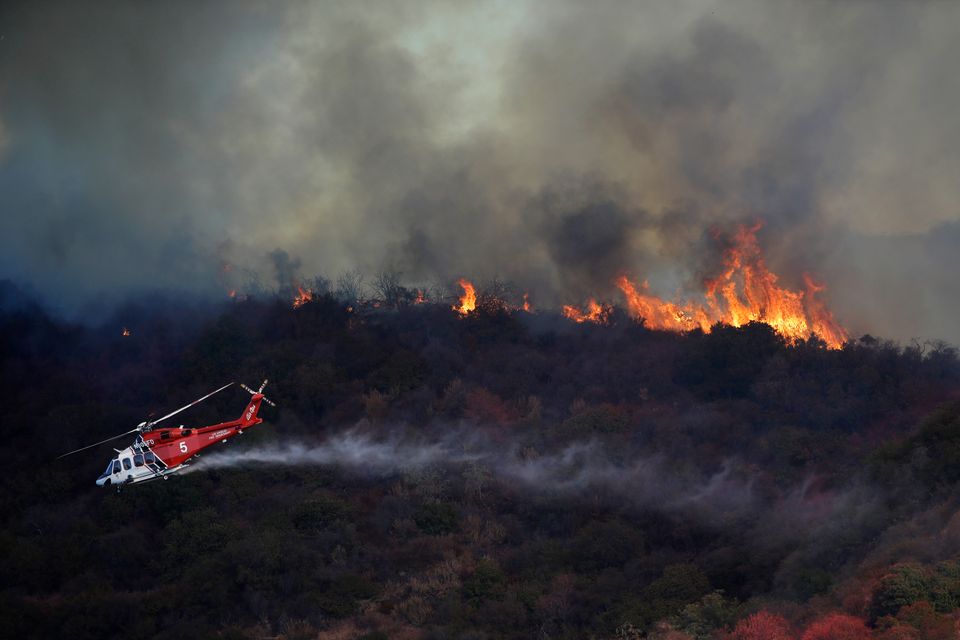 A wildfire that broke out early today on the western side of Los Angeles came within a half-mile of the Getty Center and its priceless art trove, but the situation has “dramatically improved” and the museum is safe, a spokeswoman says.

“It’s pretty much under control,” says Lisa Lapin, vice president for communications at the Getty Trust, who said that the fire began near the 405 freeway and spread to the north and west of the museum around 2 am.

The 1997 Getty Center campus, designed by Richard Meier and expressly built from stone, metal and cement to resist fire, also has a powerful irrigation system connected to a million-gallon water tank that was immediately activated to drench the property, Lapin says.

Firefighters had to wait until daybreak to start dousing the blaze from above with helicopters and air tankers but then moved “very aggressively”, she says, adding, “They’ve really done an amazing job.” She says the fire was now smouldering rather than spreading toward the Getty’s acreage.

Both the Getty Center and the Getty Villa in Malibu were closed for the day as firefighters worked to control the blaze. The Getty Center near daybreak as a wildfire spread nearby J. Paul Getty Trust

Lapin says she was saddened to witness the loss of homes across a canyon to the west of the Getty, however. “We’re looking at blackened hillsides and homes that have burned down to their foundations,” she says. “We’re feeling very sad for our neighbours.”

The biggest factor fuelling the fire overnight was strong winds, which were expected to die down in the afternoon, Lapin says. She spoke from an emergency operations center next to the museum from which Los Angeles Fire Department engineers were directing the water drops to the surrounding area and overseeing other logistics.

The blaze in Los Angeles was unfolding as firefighters in Northern California wine country were battling a destructive wave of flames that prompted tens of thousands of people to flee their homes and wreaked havoc on hundreds of thousands more. The California utility Pacific Gas & Electric cut off power to an estimated 2.5 million people in the northern part of the state in an effort to keep additional fires from starting.

Lapin emphasises that in addition to the thick travertine covering its exterior walls, the Getty Center has other mechanisms to resist and contain fires. The buildings on its campus have automatic fire doors that can trap fires in sealed-off areas within the museum and an air conditioning system that pushes smoke out instead of letting it in, she notes. Constant clearing of wild brush and landscape maintenance across the campus also minimise the dangers, she adds.

“We’re trying to reassure people that we’re OK and the art is just fine,” she says.