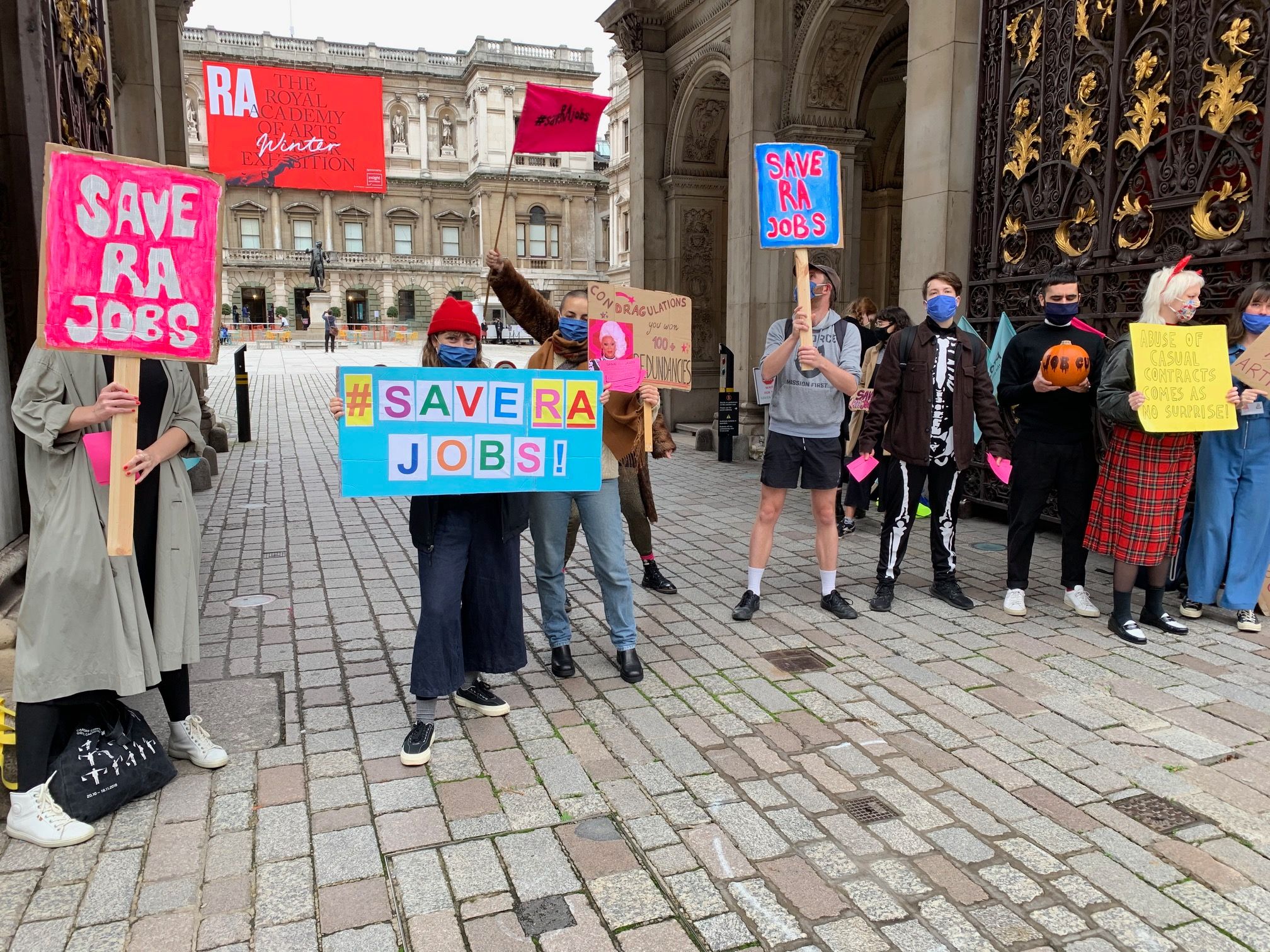 Staff from the Royal Academy of Arts in London have been protesting job cuts outside the museum Photo: Gareth Harris

A petition calling for staff recently made redundant at the Southbank Centre in London to be put back on the payroll has been launched following the extension of the furlough scheme until the end of March next year. In September, 322 workers were made redundant at the flagship arts centre in the wake of the Covid-19 crisis.

The furlough initiative, or coronavirus job retention scheme (CJRS), subsidises the wages of people who cannot do their jobs during the pandemic; under the scheme, furloughed employees are paid 80% of their normal pay up to a maximum of £2,500 a month. According to the BBC, “as part of the revised scheme [announced by Chancellor Rishi Sunak], anyone made redundant after 23 September can be rehired and put back on furlough.”

The Southbank Centre petition was launched by “current staff [and] recently redundant staff”. It states: “At the time of redundancies the UK government stated that the job retention scheme would end in October, hence why Southbank Centre went ahead with huge job cuts.”

The petition adds: “We call on Elaine Bedell (Southbank Centre CEO) to put all workers made redundant at Southbank Centre between 7 September and 31 October 2020 back onto the payroll until the furlough scheme ends in March 2021.”

A spokeswoman for the Southbank Centre tells The Art Newspaper: “We're waiting for further guidance from the government about the terms of the furlough extension so we're not able to offer a statement at this time.” The centre is still waiting to hear if it will benefit from the government’s £1.57bn Cultural Recovery Fund.

Meanwhile, in a surprise move the Royal Academy of Arts (RA) applied to the government’s Culture Recovery Fund but was not successful. “We will not be given any financial support from the fund,” says a spokeswoman.

“Approximately 100 roles are currently at risk. The consultation involves the whole of the organisation,” says a spokeswoman who stresses that to secure the survival of the RA, annual costs must be reduced by £8m.

A little double post this weekend: ⚠️ Last week we posted about the Royal Academy of Arts who announced plans to make 100+ staff redundant. Staff peacefully protested this outside the building. Since then, Rishi Sunak has extended the furlough scheme but the RA’s response is that they are only going to top up pay to 100% for staff with contracted status - and are refusing to do the same for casual staff members who don’t have the security of a contract but who prop up the workforce nonetheless, and who the RA have relied on for years. These are also the lowest paid staff, most precarious, and most work high risk roles in front of house as they are public-facing. This is during the consultation period too, which they still insist on ending in December, ie. those 100+ people are about to lose their jobs as well. The RA has MONEYYYY we all know this, we have known this for years. Again, as @d.o.a.u.k reports ‘‘just 22 @royalacademyarts staff were paid a total of £1,688,000 and £2,070,000 in 2018/19.’ They should top up casual staff without contracts to 100% given the work they provide for the RA and you know, given the fact we’re in the middle of a pandemic and people need money to live. [ID: screenshot of an email from the RA to staff members that reads: ‘In order to mitigate the lost income associated with the closure of the RA, we will make every effort to maximise the CJRS by furloughing as many roles as possible during this period. All furloughed employees (and furloughed casual workers identified to have contracted status) will be topped-up to 100% for the period to 2 December inclusive. No members of the Staff Consultation Forum will be furloughed through this period. For casual workers, the RA will leverage the scheme to support our colleagues through this challenging time. However, given the RA’s increasingly precarious financial position, we cannot top up casual staff beyond the government’s proposed 80% subsidy. As a reminder, Casual pay is calculated as 80% of the higher of either: (1) the wages you earned in the corresponding calendar period last financial year; OR, (2) the average monthly wages paid in the previous tax year (2019/20).

An internal email from the RA recently posted on the Instagram feed of the art criticism platform The White Pube says that in light of the extension, all furloughed employees, and furloughed casual workers identified to have contract status, will be topped up 100% for the period to 2 December. But the RA “cannot top up casual staff beyond the government’s proposed 80% subsidy”, the email says.

The White Pube has criticised the move, saying that “they should top up casual staff without contracts to 100% given the work they provide for the RA and… given the fact we’re in the middle of a pandemic and people need money to live.” A protestor campaigning against the planned cuts outside the RA last month told The Art Newspaper that “many of the lowest paid most precarious casual workers are furloughed on 80%”.

The RA spokeswoman says: “I can confirm that The White Pube Instagram post you are referring to was an excerpt of an internal email sent to all RA staff on 3 November. This was sent when the CJRS was extended to December and before the CJRS extension to March was announced.”

She adds that the RA is doing all it can to assist employees and casual workers during this period. “Furloughing employees, and casual workers identified to have contracted status: i.e. more than two years continued service, is a cost saving for the RA, however furloughing casual workers actually comes at a cost to the RA (National Insurance, pension and holiday entitlement) and the RA cannot at this time afford to ‘top up’.” Crucially, the RA is reviewing how it can make use of the coronavirus job retention scheme until March 2021.

Other cultural institutions say they will take the furlough extension into account. In September, the Victoria and Albert Museum (V&A) announced that it is consulting staff on job cuts, with 10% of the workforce facing redundancy.

A V&A spokeswoman says: “Front of house colleagues, who are impacted by Phase 1 of the V&A’s consultation process, are now on furlough until early December, when we hope to reopen the museum. We’re reviewing last week’s announcement of the extension to March as part of the consultation process, which is ongoing.”

Meanwhile, a senior figure at a national museum who preferred to remain anonymous tells The Art Newspaper: “The extension of the job retention scheme helps, but it is all last minute and makes planning difficult. We know that the Spending Review scheduled for 25 November [which sets out government spending plans for the next year] will now only be for one year with extra Covid-19 funding decided separately. There is concern in our sector about the deferred maintenance of our estates, which is not helped by short-term funding.”

UPDATE (11 December): A spokeswoman for the Southbank Centre says: "We've carefully reviewed the legal terms of the recent furlough extension and in consultation with the unions, we've identified over 40 roles that have been or are about to be made redundant that could be eligible under the terms of the scheme, based on the likelihood of work now being available. We're in discussion with these former colleagues about opportunities to return to the Southbank Centre under the furlough scheme."