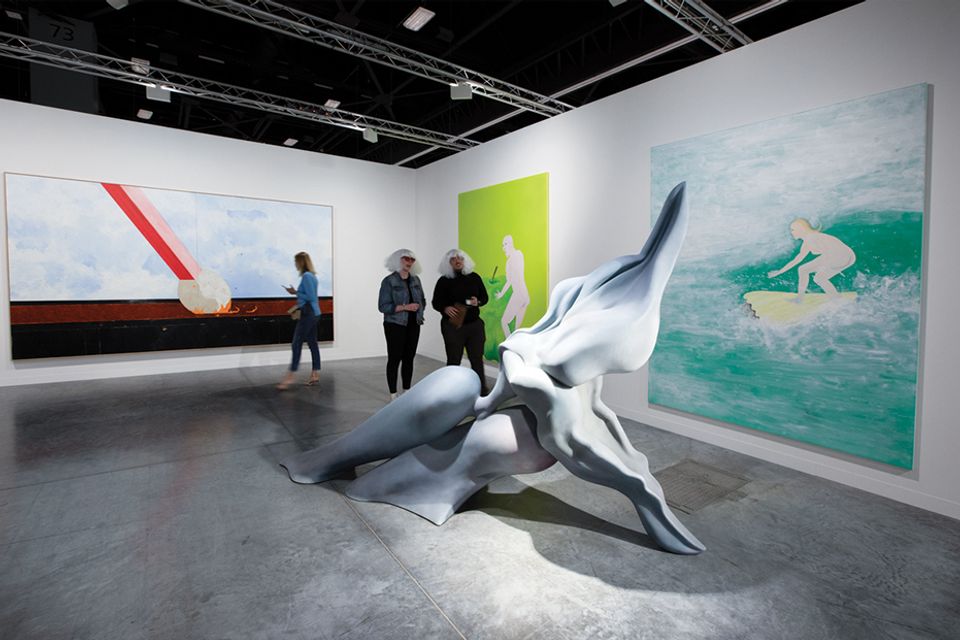 Clearing gallery, which represents artists including Harold Ancart and Calvin Marcus, is enjoying its first outing to the main section of Art Basel in Miami Beach Photo: David Owens

Graduating from the small projects stands of a fair like Art Basel in Miami Beach (ABMB) to the main galleries section is a leap that many galleries find financially impassable. So to help breach the gap, Art Basel has, for the first time, offered new galleries exhibiting contemporary art 20% off the cost of their stands in the fair’s main section. (New exhibitors who also show Modern art, such as Ben Brown Fine Arts and Ceysson & Bénétière, have to pay full price.)

As some more affordable fairs have an age limit, galleries such as 14-year-old Hunt Kastner can end up in the tricky “adolescent phase”. She says: “We’re still not the grown-ups and it’s a huge leap [to the main sections of fairs like ABMB].” Its works are less expensive than many on its neighbours’ stands and so by Thursday morning it had sold three embroideries by the young Czech artist Klára Hosnedlová (priced at €6,000 each), plus two photographs by Jiri Thyn (priced at €2,000-€3,000).

Clearing gallery—another first-time exhibitor in the fair’s main section—represents several in-demand artists such as Harold Ancart and Calvin Marcus, who also work with David Zwirner and David Kordansky respectively. Because of this, it is important for Clearing to present such artists on a level, equally visible platform at fairs, says a representative from the Brussels and New York gallery. Clearing’s sales have included a large painting by Ancart ($380,000), three paintings by Marcus ($70,000 each) and a mixed-media work by the Thai artist Korakrit Arunanondchai for around $100,000. This is enough for the gallery to cover its costs says its Brussels director Lodovico Corsini. “If they offer 20% off next year, we’re definitely coming back,” says Jack Eisenberg from its New York space.

The discount “helped, obviously, but it’s still insanely expensive,” says Sinisa Mackovic of New York’s Karma gallery, which has previously participated in Nada. He says their cost of exhibiting, including transport and accommodation expenses, is “close to six figures”. The gallery has sold works by every artist it is showing, including Alex Da Corte, Henni Alftan and Woody De Othello, at prices ranging from $10,000 to $200,000. “Miami is the first step to being part of the whole Art Basel group,” Mackovic says. "Exhibiting marks a growth in our gallery, too."

At just six years old, the Paris gallery High Art, which previously participated in the Positions sector, is the youngest in the fair’s main section. The benefit of being a younger gallery, says its co-founder Jason Hwang, is not feeling like you have to follow the path of the more established galleries. “Our strength is experimentation, which some consider to be antithetical to art fairs.”

The Chicago-based gallerist Mariane Ibrahim is a first-time exhibitor within Art Basel’s Nova sector, where smaller stands cost a flat fee of $22,500. Ibrahim had sold all six paintings by the Ghanaian artist Amoako Boafo (priced between $30,000 and $45,000) before she even had a chance to hang them on the wall, so it has “definitely been profitable”, she says. “I wasn’t sure I was emotionally ready for the possible rejection,” Ibrahim says of applying to the fair.