Botticelli’s violent stories have a contemporary resonance in #MeToo era

A small show at the Isabella Stewart Gardner Museum in Boston is the first to focus on the revolutionary narrative paintings of the early Renaissance master Sandro Botticelli, best known for his masterpieces The Birth of Venus (around 1485) and the Primavera (around 1480). The Primavera, which is in the Gallerie degli Uffizi and does not travel, is a “spalliera” painting, as are the majority of the eight works in the forthcoming exhibition. The description derives from the Italian for shoulder (spalla), the height at which these innovative types of domestic painting were designed to be seen.

“At the heart of the exhibition is the reunion of two famous spalliere panels: The Story of Lucretia [1499-1500], part of Isabella Stewart Gardner’s original collection, and The Story of Virginia [around 1500],” says the curator Nathaniel Silver. The works have been “reunited for the first time thanks to a close collaboration with the Accademia Carrara in Bergamo”. 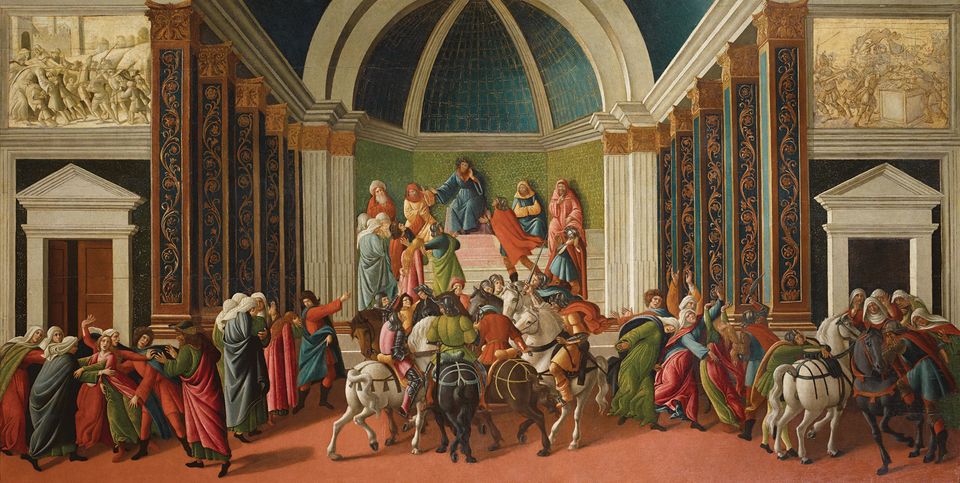 Botticelli, The Story of Virginia (around 1485) © Accademia Carrara, Bergamo

The exhibition provides an opportunity not only to explore Botticelli’s ability as an “incredible storyteller, one who the most cultivated patricians looked to to come up with completely original approaches”, but also “to explore his storytelling from a contemporary perspective”, Silver says. Botticelli’s interpretation—almost comic-strip style—of these violent ancient stories of heroines and heroes is dense and graphic, and the tales may not be well-known to contemporary visitors, even though they have real contemporary resonance; they were originally intended as political and moral parables.

The museum has worked with Karl Stevens, an award-winning graphic novelist and New Yorker cartoonist, to reconceive the stories as cartoon strips, highlighting seminal moments in the dramas. In addition to the contemporary visual idiom, Stevens’s contribution gives the ill-fated heroines of the violent sagas of rape and assault their voice. Scott Nethersole’s essay in the accompanying catalogue argues for Botticelli’s particular sensitivity to violence: he does not, for instance, show Lucretia’s rape, but rather the peril made visible by Tarquin’s threat.

Another spalliere series dramatises the story of the early Christian saint Zenobius, with panels coming from the National Gallery in London and New York’s Metropolitan Museum of Art.

As the subject of the exhibition is spalliere panels, the exhibition design provides a chance to experiment with the height of the paintings. They will be hung at shoulder height, but rather than this being fixed, the heights vary slightly, as many of the large pieces of Renaissance furniture that they were originally inset into—or located above—were completely custom-made.

The main sponsor of the exhibition is Bank of America.