The late painter’s shaped canvases, including some museum loans, are the subject of a survey in New York 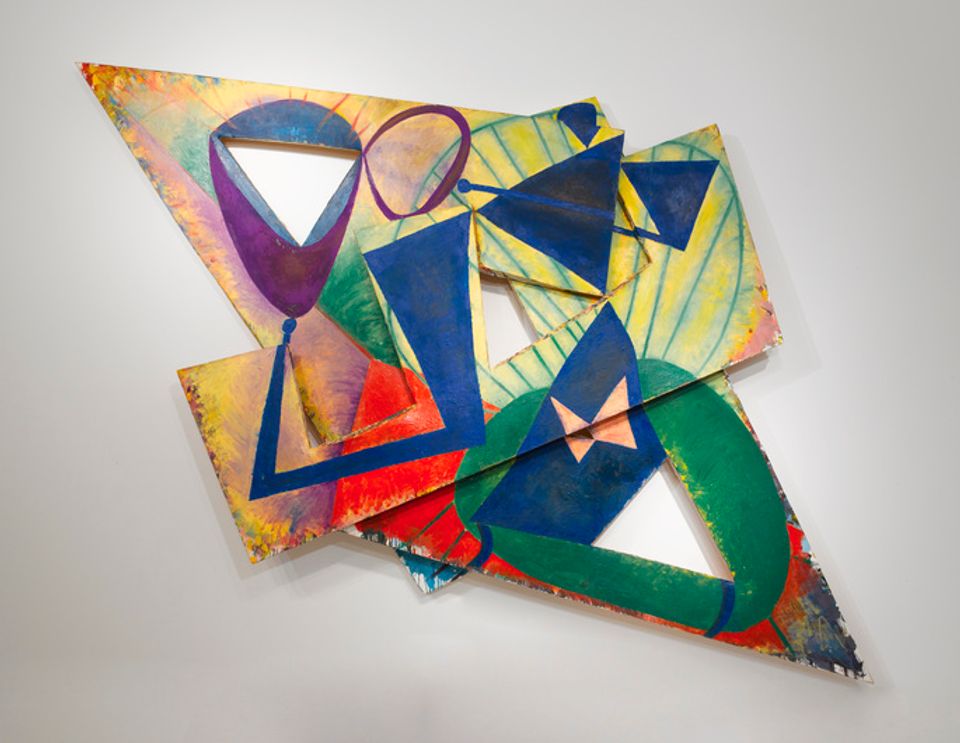 The late American painter Elizabeth Murray (1940-2007), whose shaped paintings are rarely what they seem, is the subject of a new exhibition at Pace Gallery in New York. The survey of her work from the 1980s includes loans from US institutions including the Museum of Modern Art and the Whitney Museum of American Art.

Pace's president Marc Glimcher says the show came from a desire to re-introduce an important women painter into a canon she helped shape. The Neo Expressionist artists of the late 1970s helped usher in a "golden age" of painting, Glimcher says, but the key players recognised at the time were mostly men. "Elizabeth Murray is as big a piece of that puzzle as anybody," Glimcher says.

The 16 paintings in Pace’s show speak to Murray’s interest in the joys and fragility of domesticity. In the early 1980s, Murray met the poet Bob Holman, whom she married, and her paintings began to reflect his influence. In 1982, while the couple were in the South of France, Holman wrote a poem titled Water Man. Murray was pregnant with one of their daughters, Sophie, and painted Water Girl (1982) in response to his writing. The catalogue for the show also includes Holman’s poems.

Other works, such as Just in Time, Summer (1981), lent by the Philadelphia Museum of Art, are less harmonious. The work depicts a mug split into two shaped canvases. Another picture, Flying Bye (1982), is of a glass of wine turned upside down, falling towards the floor. 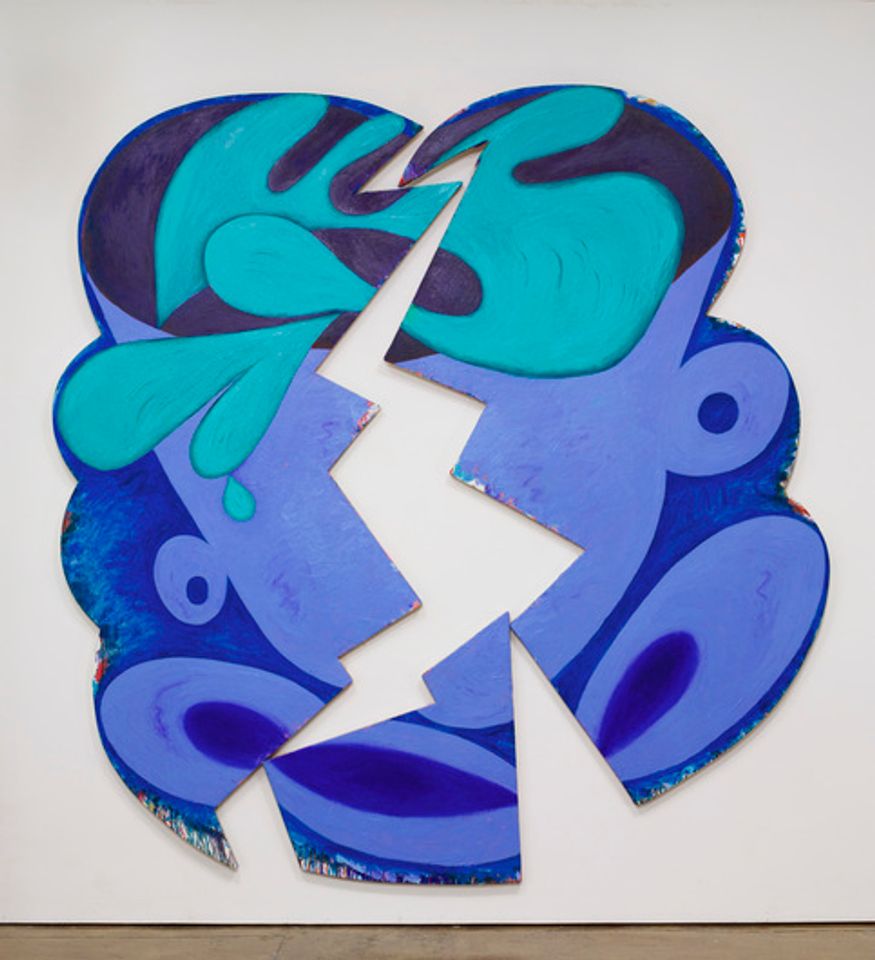 But Murray’s paintings rarely have only one clear form. “She was always intentionally putting secondary images into the work,” says Douglas Baxter, a director at the gallery (and a godfather to one of the artist’s children). Tables appear frequently in paintings from this decade, but they are often difficult to make out. Not Goodbye (1985) offers a view of a desk from either above or below—it is impossible to tell which—with the center of the desk cut out making the wall behind the painting clearly visible.

“I always thought they were paintings,” Murray is quoted as saying of her work at this time in a press release. “I wasn’t thinking of sculpture; I wasn’t even thinking of relief, to tell you the truth. I was always thinking of painting.”

Curators began to take notice of Murray’s work during this period and she and had her first museum retrospective in 1987. It travelled to seven venues, including the Museum of Contemporary Art in Los Angeles and the Dallas Museum of Art. Pace’s new show, which follows a 2011 exhibition at the gallery of Murray’s work from the 1970s, focuses on the artist’s mature style. “This exhibition belongs to the Elizabeth Murray one knows,” Baxter says.

Although there are consistencies in her work—most of her pictures are shaped canvases, many have multiple parts, and rarely do the paintings have fewer than five vivid, clashing colours—Murray did not feel the need for a clear signature style or sense of progression, Baxter says. 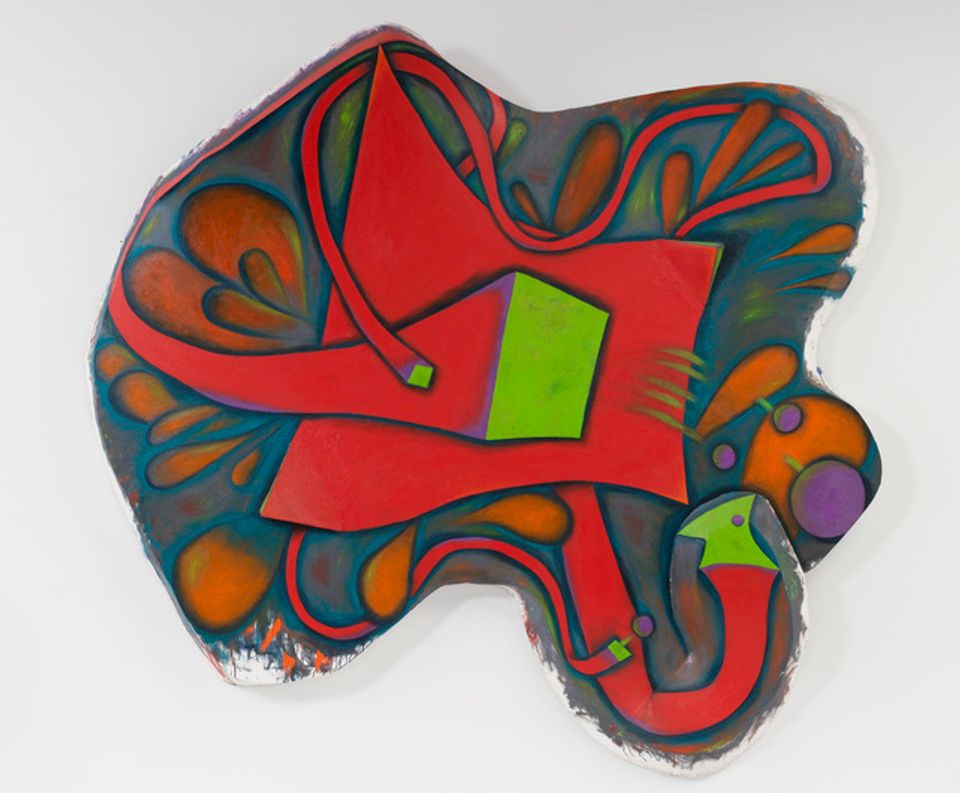 Perhaps that is what drew the painter Chuck Close to her work. In the 1960s, shortly after he moved to New York, they met and began what Close calls “a visual admiration society” with artists such as Jennifer Bartlett, another friend of Murray’s. “We were very disparate artists. We talked and showed each other our work in our studios,” Close says, adding that he felt Murray was “a wonderful painter from the first moment I saw her work”.

For the younger painter Justine Hill, what stands out about Murray is the deliberateness of her style. “She’s able to make the cut-out shapes seem necessary, as if she didn’t need what was around them,” Hill says.

Although she stresses that her work is different from Murray’s—“I feel like I’m really concerned with mark-making, whereas she was wonderful at moulding forms physically”—Hill says she’s drawn to the simplicity with which Murray described her work. “There didn’t have to be this long, drawn-out art-historical conversation about why something should be” in a painting, Hill says.

"These are not shy retiring paintings," Glimcher says. "Collectors first response when standing in front of her work is to just take two steps back. That was her intention to come and barge into your space."