Shanghai annual art week, with Art021 Shanghai Contemporary Art Fair (7-10 November) and West Bund Art & Design (8-10 November) at its epicentre, kicks off today with a manic explosion of exhibition openings. And it seems poised to be the city’s most high-profile yet, particularly with the grand launch on 8 November of Pompidou Shanghai within the new West Bund Museum.

Fair organisers and participating dealers alike claim to be unfazed by China’s slowing economy, the ongoing trade war with the US and unrest in Hong Kong. If anything, some say, the ongoing disruption and uncertainty in Hong Kong will only reinforce Shanghai’s centrality to the Asian art market. Though there is an air of performative optimism to this confidence, the expanding season lends credence to such determination.

“We actually don't feel much difference at the moment,” says Art021’s co-founder Kylie Ying of the current economic climate. Regarding Hong Kong, she says: “We do believe art goes beyond politics. Mainland [China] has its own independent art market. It might be an opportunity, but we can’t really tell at the moment.” She adds that the Hong Kong-based Alisan Fine Arts and Gallery Exit are returning to the fair, which has 110 exhibitors this year, with Opera Gallery and Empty Gallery attending for the first time.

Meanwhile at West Bund Art & Design many international galleries with Hong Kong locations are joining, alongside Hong Kong-bred galleries Mine Project and Rossi Martino. Of the 109 exhibitors at the fair this year, 28 are showing for the first time including the London-based Stephen Friedman Gallery, which will bring works by David Shrigley, Mamma Andersson, Jonathan Baldock, Yinka Shonibare and Luiz Zerbini. The gallery has just opened a pop-up exhibition in Hong Kong of work by Stephan Balkenhol and Andreas Eriksson "which sold out extremely quickly" Stephen Friedman says, adding: "Shanghai is of course a different market, but our experience in Hong Kong points in the right direction. The art market shows resilience in many parts of the world, so we are not perturbed."

Friedman continues: "We don’t know how the market will develop - but we are here to find out and hopefully be part of its growth. The sheer volume of events and openings this week in Shanghai is itself a testament to this expansion and the quality of the industry in Shanghai—this is a good enough indicator for us, and it’s something we feel our artists and our programme can engage with in a serious way." 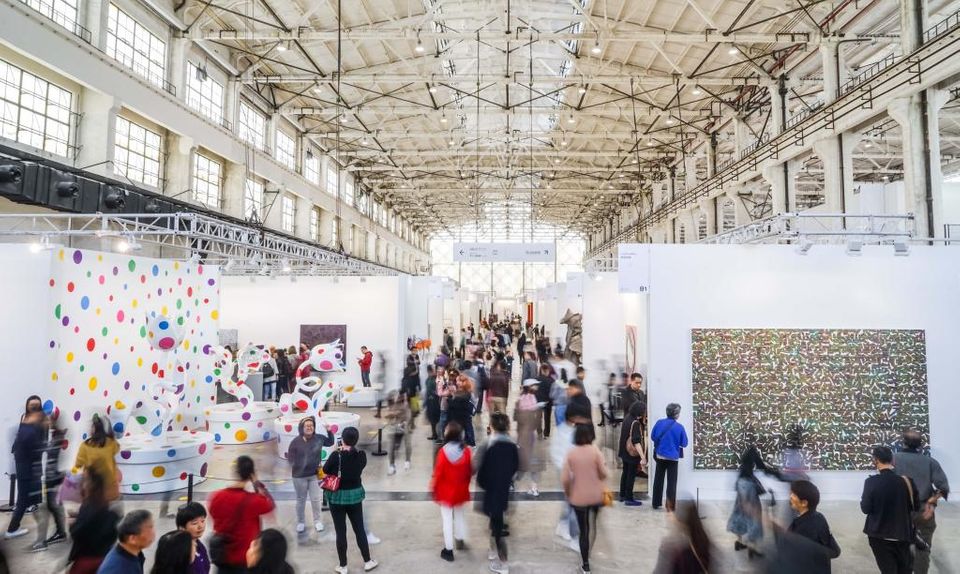 A West Bund spokeswoman points out that this month “marks the inaugural Shanghai International Artwork Trading Month.” This initiative aims to accelerate Shanghai’s development into a global art trading hub and was thought up by the West Bund Group and Kailan Marketing & Planning Company (it is also backed by Shanghai’s Municipal Bureau of Culture and Tourism, the Xuhui District Government, the municipal and district Communist Party Committees and the taxation and foreign exchange bureaus).

As Kylie Ying says, the Chinese government has once again lowered tariffs on art sales to 1%. She adds: “Any imported goods in China are still submitted to a VAT of 13%, it used to be 16% though. Comparably it's still quite high, but the government is working on the adjustment. We are working closely with Shanghai Waigaoqiao Free Trade Zone, which could provide convenient warehousing for galleries.”

“The appetite for contemporary art in the city is going from strength to strength and we are excited to meet new collectors and introduce our artists’ work to them,” says Laura Zhou, White Cube’s Asia director. The gallery will be showing Eddie Peake at Art021 and artists including Tracey Emin, Chuck Close and Wang Gongxin at West Bund this week. “Regarding the current trade war, we are not seeing any significant impact as we operate on a global scale,” she adds. White Cube now has representatives in Taiwan, South Korea and Southeast Asia as well as its Hong Kong gallery, which Zhou says “has been operating as normal but we are keeping a close eye on the situation. Hong Kong remains an important hub for the art market in Asia and day to day life for our team working in Hong Kong continues as usual.”

Some Shanghai-based galleries do admit to feeling the economic pinch. “The current overarching economic environment is not so satisfactory, which has definitely impacted the art market,” says Lise Li, the owner of Shanghai’s Vanguard Gallery, which is this year bringing art by Bi Rongrong, Song Yuanyuan, Frank Wang Yefeng, Hsu Che-yu and Yuki Onodera to Art021. However, she adds that China’s domestic art market is much more mature than it was when the last slowdown occurred in 2008: “Domestic collectors have become mature and experienced, and collection practices will not change just become of economics. I think this is a very good phenomenon, and a positive signal for the local gallery industry and art ecology.”

Design Miami is expanding to Qatar

Design Miami is expanding to Qatar