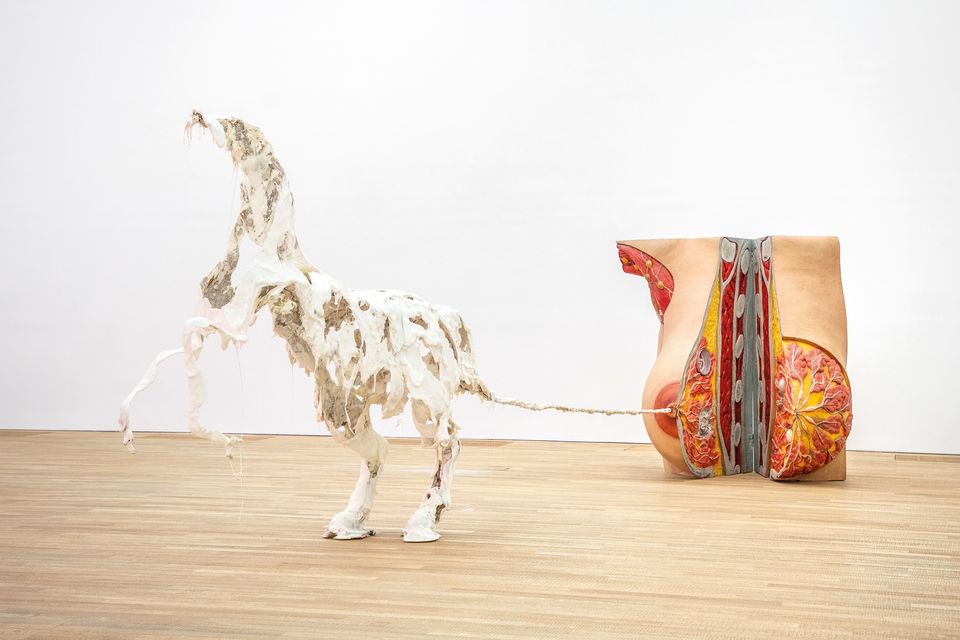 It feels apt that an exhibition on violence is on show at the former Central Police Station and prison compound that is now the Tai Kwun Centre for Heritage and Arts. But the theme is not that literal: the display looks at how societal structures are a form of violence, and how gender norms are defined and imposed. “Upbringing, cultural attribution, existing power structures, social codes, religious traditions and biological manifestations unite to form a violent normative framework that governs body, sexuality, identity and behaviour,” according to an exhibition statement.

This structural gender violence is a “symbolic castration”, says Susanne Pfeffer, the director of Frankfurt’s Museum für Moderne Kunst and the show’s curator. Violence “is part of our societies, it is activated in the ways in which our societies realise themselves and are realised by ourselves”, she says. “In that sense we all are part of that performance.”

Tai Kwun, the long-awaited, cultural venue that opened last May, invited Pfeffer to organise Performing Society after her trilogy of exhibitions at the Fridericianum in Kassel, Germany, where she explored the philosophy of New Materialism and notions of humanity and nature in a post-internet world. Pfeffer says that she travelled and did extensive research for the Tai Kwun show.

There are 11 artists in Performing Society, including Beiijng-based Dong Jinling, Liu Yefu and Ma Qiusha, Hong Kong’s Wong Ping, as well as international names such as Pamela Rosenkranz from Switzerland and Anne Imhof, the winner of the Golden Lion at the 2017 Venice Biennale, who have both produced new works for the exhibition.

Gender issues—and gender-based discrimination—are increasingly being tackled by public Asian art institutions, although they have often focused more heavily on non-binary gender identities. In 2017, the Museum of Contemporary Art in Taipei staged the first-ever museum show on queer Aisan art, Spectrosynthesis: Asian LGBTQ Issues and Art Now. The expanded second leg of the show is due to open in November at the Bangkok Art and Culture Centre, where it is billed as the largest show of its kind. Last spring, the M+ Pavilion held a show specifically on the role of gender in Hong Kong’s popular culture.

“I think these questions are relevant all over the world,” Pfeffer says. “There is an urgency to take stock and to give a voice to that urgency.”

For more shows to see during Art Basel in Hong Kong, see our exhibition round-up