Show’s 22nd edition aims to be as much a conversation as an exhibition, with hundreds of public events including bushwalks with aboriginal elders and campfire talks

Exactly 250 years after maritime explorer Captain James Cook claimed the east coast of the Australian continent for Britain, the Biennale of Sydney is sailing away from the traditional European biennial model that has guided its growth since 1973.

The biennial’s chief executive, Barbara Moore, who was appointed six months ago after eight years as the organisation’s head of development, says the concept of the Biennale as a “cabinet of curiosity”, where a public exhibition was supported by a programme of talks and workshops, was “gone”.

“Instead now we have an exhibition where the public programme is part of the exhibition. It’s not one supporting the other, it’s the same thing. And I think that’s where it’s changing,” Moore says.

The recently-released public programme for the 2020 Biennale runs to 30 pages. There are hundreds of events, from bushwalks with indigenous elders to guided tours of sites of past oppression and cruelty, such as the Parramatta Female Factory (a former prison and workhouse in western Sydney), campfire talks, food preparation, and a workshop in which visitors can “share thoughts and wishes for an alternative narrative for children and young people who were—and are—incarcerated”.

Asked if audiences this year could expect to participate in the Biennale rather than simply look at it, Moore says the Biennale was “becoming more of a conversation”.

“Some people just want to go to the exhibition and not talk to anyone and just have a bit of a sanctuary, and that’s OK—they have that place. But some people are looking for a real experience that’s not as quiet, or might be a conversation, or it might just be listening. So I think this is really touching on different senses,” she says.

“The Biennale’s new direction is not just for the 2020 iteration. It’s a deliberate new strategy that will take the event into the future.”

The Australian artist and scholar Brook Andrew is the artistic director for this year’s Biennale. Andrew has given it the title Nirin, the word for “edge” in the language of the indigenous Wiradjuri people. The public programme is Nirin Wir, or “edge of the sky”.

Andrew said the Biennale is bringing in another change by including the work of scientists and chefs as well as artists. Australian-based Adrift Lab, whose work includes researching ocean-borne plastics, will have a space on Cockatoo Island in Sydney Harbour—one of the six major Biennale venues—where visitors can see the work they have been undertaking on Lord Howe Island (an idylllic island 600km east of the New South Wales coast). The Australian chef Kylie Kwong is working on a project with the Wayside Chapel, an inner city community church in that supports homeless people.

Andrew, who will turn 50 during the Biennale, is an associate professor in the fine art department of Melbourne’s Monash University. An internationally exhibited artist, he has often produced work alongside various communities or within international museums. One of his ongoing concerns is to challenge the “dominant narratives” in history.

For Moore, Andrew was the right man to guide the Biennale’s first steps to renewal.

“When we went looking for an artistic director for this coming edition, we really acknowledged that our purpose is two-fold,” Moore says. “It’s supporting artists and very much engaging audiences, and how we wanted to do that was to up the programming side of it, to really acknowledge the contribution that audience make in coming, in attending and valuing that. Brook was really recruited to be the first of this new direction for the Biennale.” 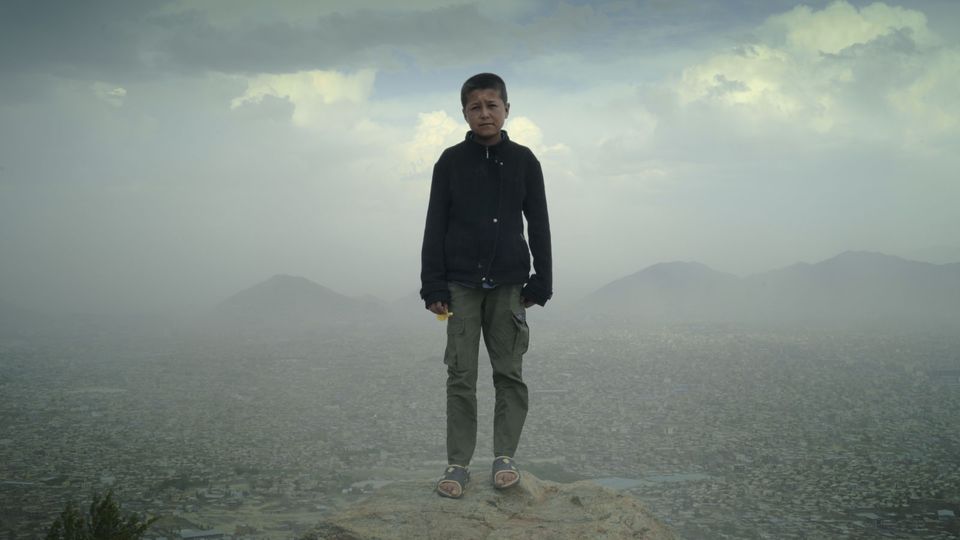 A still from Kabul-based artist Aziz Hazara's video Bow Echo (2019), which he created for the Biennale Courtesy of the artist and Hans Nefken Foundation

European biennials are traditionally about “showing off the cultures of the colonies”, Andrew says. “What I’m trying to do is show maybe a different view which means that it is artist led, not institutional led,” he said. First Nations sovereignty and indigenous languages are at the core of the Biennale, he says.

“Language defines culture, and without language, how can you practice culture?” Andrew says. “Dominant languages flatten out the nuances or intricacies of anyone’s way of life.”

The last Biennale of Sydney drew 850,000 visitors, and both Moore and Andrew are confident that their new direction will draw good attendances.

“I think we have just as many big names in the Biennale as there have ever been: Huma Bhabha, Ibrahim Mahama, Zanele Muholi, Arthur Jafa, Jose Davila,” Andrew says.

Ms Moore said she had “absolute confidence that it will draw the crowds”.

“We’re not sacrificing the quality of the show for this,” she said. “Instead we’re working with a lot of partners to be able to deliver a wider programme than we would otherwise be able to provide.”