Emphasis on "storytelling" and making connections at the cross-collecting fair this year, chief executive says. So we created some tenuous links of our own The preview of Masterpiece London opens today at the Royal Hospital, Chelsea, in the midst of political turmoil as the UK government’s ruling party continues to be at loggerheads in an attempt to find a new leader. Such conditions are, acknowledges the fair’s chief executive Lucie Kitchener, far from ideal: “It’s definitely been on people’s minds, on our minds and that of our exhibitors. It has encouraged people to put a huge amount of effort and thought into what they’re exhibiting. When times are uncertain or challenging, people put their best foot forward. I think there’s a sense of confidence and excitement here today.”

Kitchener has sought to “evolve not change” the multi-disciplined art, antiques and design fair—which launched in 2010 and lays claim to London’s longest champagne bar—since she joined in 2016. This year, it has over 150 exhibitors, including newcomers such as Richard Saltoun and Annely JudaFine Art, both London-based contemporary art galleries, and a sculpture trail both within the fair and outside, “more tightly curated” for 2019 by the advisor, Jo Baring.

“One of the things I’m seeing is the sense of narratives—people aren’t just bringing items, they’re really making an effort to explain and bring to life the story behind them,” Kitchener notes. She points to Daniel CrouchRare Books and Les Enluminures who have jointly created a themed stand titled Sapiens. “They have one case on death, one on love and one on family,” Kitchener says.

The team at Masterpiece London love to talk about cross-collecting, discovery and stories, so here is an attempt at creating our own tenuous narrative between a six works at the fair, from antiquity to the present day—be prepared for some tedious links in this attempt at six degrees of separation, Masterpiece style.

Few contemporary art galleries love a theme more than Hauser & Wirth, returning to the fair for the second year, and this year that theme is threads, taking its cue from Phyllida Barlow's immersive installation for Masterpiece Presents in the fair’s entrance. The gallery’s senior director Neil Wenman says a core principle is “connecting the dots—identifying the affinities between generations of artists and mediums, as well as periods of artistic development.”

Barlow first developed these supersized multi-coloured pom poms in the 1990s, and once said of them: “I first used them in 1996, and they’ve been cropping up ever since. They’re an attempt at something absurd that I hope people will recognize as being celebratory.” The installation is for sale as a whole, or individual pom poms are available for between £35,000 to £65,000. 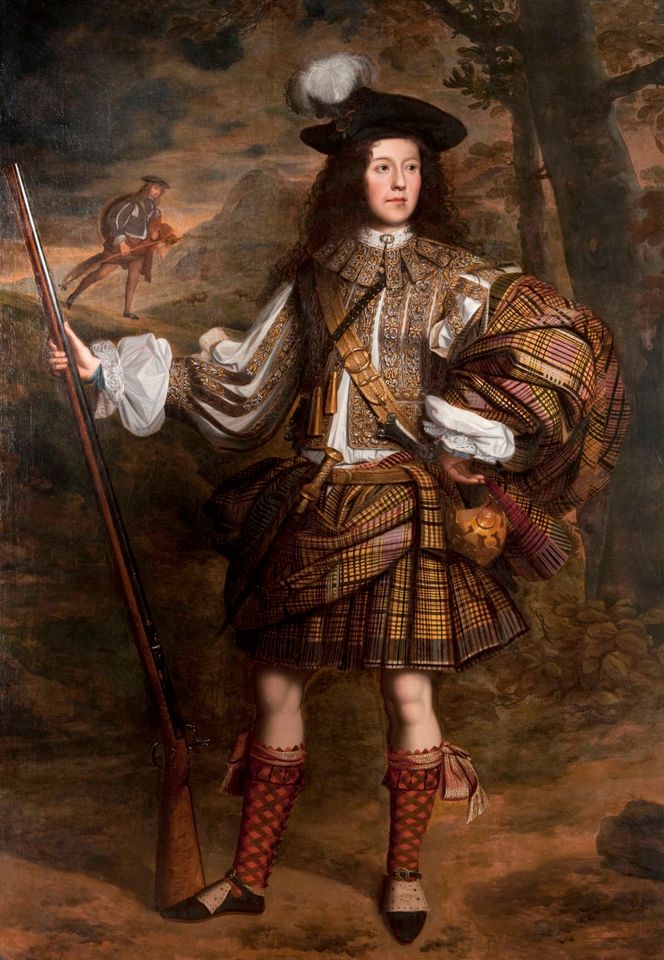 Thread counts are very important when it comes to tartan and there is a tartan named after this painting of a teenage Lord Mungo Murray (1668-1700) by the British painter John Michael Wright. Painted around 1683, it is the earliest major portrait to show Highland dress and over the past 50 years has been on loan to the Aberdeen Art Gallery, Holyrood Palace in Edinburgh and most recently Kelvingrove Art Gallery, Glasgow, from 2000 until this year. He is being exhibited at Masterpiece by Patrick Bourne and arrived at the fair with “Patrick Bourne. Big Jock” on the packaging courtesy of the shippers. Priced in the region of £750,000, “Big Jock” is now on reserve for a museum. 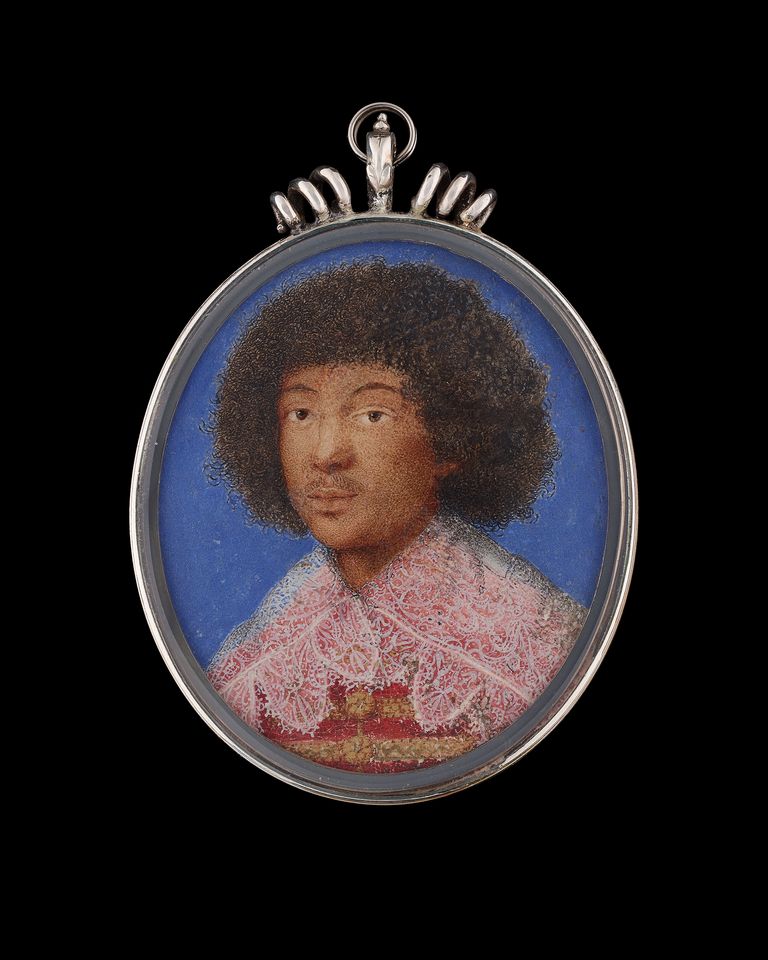 Though he was a poster boy for aspiring “gallant Highlanders”, poor Mungo didn’t have much luck in the end—he died in Panama at the age of only 32 when fighting the Spanish. Another dashing man who died young while adventuring in the 17th century was the Ethiopian born Zaga Christ (around 1608-1638) who died aged only 28 from pleurisy in France and is depicted in a portrait miniature in around 1635 by Giovanna Garzoni. Exhibited by Philip Mould, the watercolour and bodycolour on vellum is thought to be the first known portrait miniature to depict a black sitter, and (even more unusually) was painted by a woman—Garzoni was herself an outsider, so perhaps that explains why she depicted Christ not as an “exotic” African (as was common at the time), but as a fashionable European courtier.

There are numerous accounts of Zaga Christ’s colourful life—he claimed King Yaˁəqob I was his father, though that’s unlikely as he was killed in 1606. He travelled extensively and, between 1632-34 lived in Rome, then left for England—he only made it as far as Paris, where he died in 1638. The epitaph on his grave in the Parisian suburb of Rueil reads “Here lies the king of Ethiopia / The original or the copy”.

"There’s a lot of hearsay and conjecture around Zaga’s story—it’s almost more amazing if he was making the whole thing up!" Mould says. "He certainly caused a sensation in Europe at the time and was treated as ‘royal’—not everybody gets to meet the Pope and Cardinal Richlieu." Zaga is also said to have written love letters to a nun—in his own blood. Of that, Mould says: "Who knows about the letters in blood and why that might be appropriate for a nun?! A lot of the documents relating to Zaga are locked away in the Vatican so it’s been hard to double check the primary sources which relate to his life. We are hoping that an Ethiopian buyer comes forward for him though..." 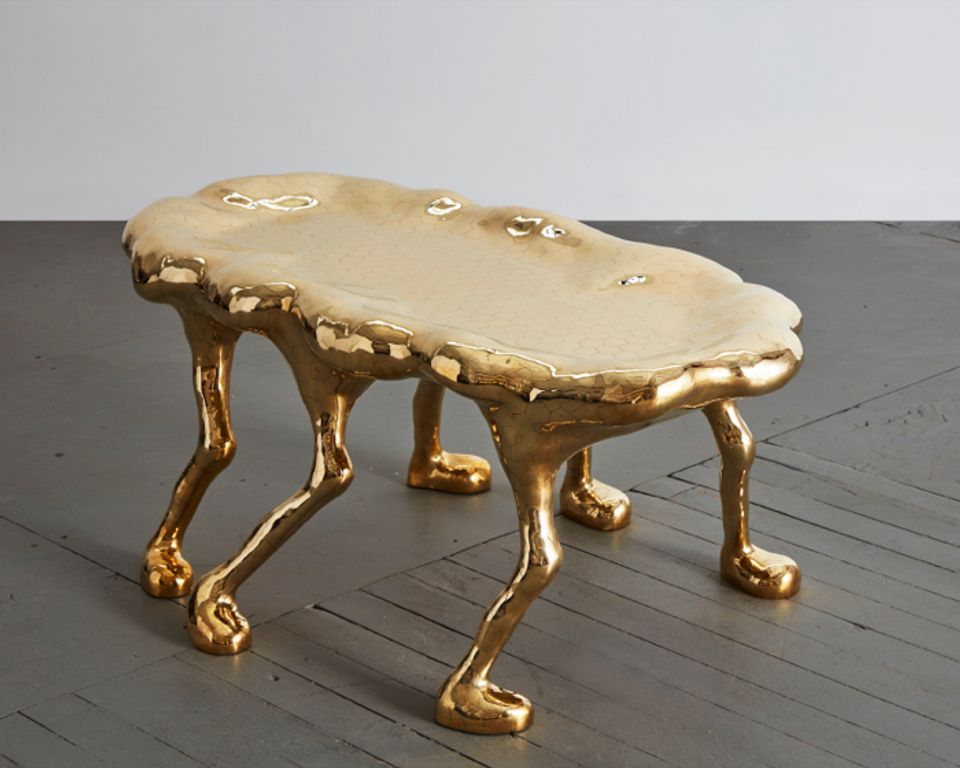 Ethiopia makes great coffee, but you need a decent table to put it on and plenty of those can be found at Masterpiece among the design exhibitors. Among them is this "Malcolm Hex" brass coffee table by The Haas Brothers, the Los Angeles-based twins known for their playful, often anthropomorphic designs. Here, they have used hexagonal shaped brass tiles because, say the brothers: “The hexagon is a special shape: it has the highest number of sides of any shape that can form a regular grid, and hexagonal grids have the greatest proportion of enclosed area to structure any grid... Notwithstanding this desirable trait of the hexagon—hexagonal grids are incredibly inflexible.” The table is being exhibited by the New York-based design specialist R & Company, with a $125,000 price tag. Back to coffee, some people take milk in their coffee and the traditionalists among us still drink cow’s milk. To produce milk, cows need to have a calf and to have a calf, a cow needs a bull. Which is where this ancient Near Eastern bull comes in, though it is doubtful he would be much use in that department—this one is designed for dispensing wine. The terracotta rhyton was made in Amlash in around 1000BC and is in the form of a zebu bull, its muzzle forming an elongated pouring spout. Priced at £98,000, it is being exhibited by the London-based antiquities specialists Charles Ede and, writes its director Martin Clist, “by the time of this vessel’s manufacture, the wine grape had been domesticated in northern Iran. It is possible that these rhytons were used to pour out wine at funerary banquets; the imagery of red wine pouring forth might have symbolised the slaughtering of the bull at funerary feasts.” 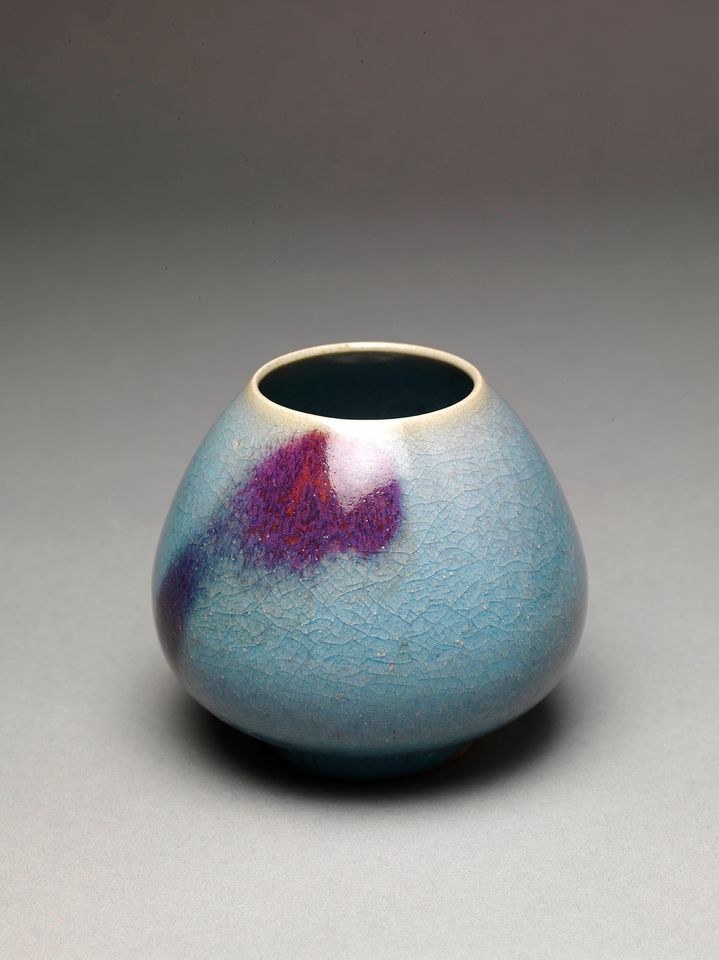 The consumption of wine and milk has risen dramatically in China in recent decades, but neither would have been consumed in the country during the Jin dynasty (1115-1234) which is when this ceramic lotus bud jar was made. The Guan vessel was made in the Jun Kiln, one of the five great kilns whose wares are still highly prized today—production and circulation was strictly monitored to maintain perfect quality. The 8.5cm vessel with its characteristic iridescent glaze has come from an old Hong Kong collection. It is now priced at £100,000 and exhibited at Masterpiece by Wui Po Kok from Hong Kong, one of the four galleries from Asia exhibiting in the Fine Art Asia Showcase at Masterpiece, as part of the partnership between the London and Hong Kong fairs—in March, in was announced that Fine Art Asia would host a Masterpiece Pavilion in October.

Mercifully, there ends our tedious links. Now find your own.