Museo del Prado’s show on the 15th-century Spanish painter is elegant, intellectually incisive and rich in both news and rarely seen art

In the Museo Nacional del Prado’s perfect show on Bartolomé Bermejo we find an artist that beguiles as well as confounds. Elias Tormo, who wrote the first monograph on the 15th-century Spanish painter in 1926, confessed: “We know hardly anything”. Though later scholarship—including this show—reveals plenty, much about Bermejo is still speculative. His education and patronage are incompletely known. He was unusually mobile, possibly a reflection of a restless, cranky character, but no one is sure. It is unlikely he ever left Spain. Whatever dribs and drabs of outside art came his way, often Flemish, he absorbed them and made them into something unique.

That “something unique” begs a bigger question. Why does Bermejo seem so modern? There are many stars in the show, but the size and dazzle of his Saint Dominic of Silos enthroned as Bishop (1474-77) make it the main course of a sumptuous feast. The show is not enormous—about 30 pieces—but it covers lots of issues in a spacious setting. The St Dominic of Silos, though, is extraordinary.

St Dominic was an 11th-century Benedictine monk from Navarre known as the patron saint of prisoners and a monastic reformer driven by notable probity. Rather than focusing on a miracle worker and redeemer of captives, Bermejo took as his subject the disciplined jefe tasked by Ferdinand I of Castile with shaking up slacker monks at Silos. His stare is riveting and penetrating. We cannot stop looking at him, and he looks deep inside us. It is art co-dependency.

Bermejo imitated, as he often did, Islamic inlay, polychrome sculpture, and Gothic pierced architecture. He evoked textures of all kinds. No one in Spain could convey sparkle or sheen as well. In nearly every Bermejo picture, so much gleam, texture, pattern and transparency make for a highly decorative look, whether it is an icon of a saint or a torture scene. He used gold amply, but it is mordant gilding—passages of unvarnished gold leaf that accents and complements the surfaces surrounding it painted in oil. His space is weirdly effective. He is comfortable with the old medieval aesthetic of flattening, gold backgrounds. Most of his work was part of a flat altarpiece.

As far as Bermejo was concerned, “a window on the world” was not the goal of a painting—his approach is modern in itself. The show and book argue that the overall effect of his style is “replacement realism”. There is so much splendour in the portrait of the St Dominic, so much gleam and zesty colour, that we advance beyond the mere subject toward sensual experience, zones between matter and illusion, and finally to abstract or spiritual thought. Pulling and pushing us back and forth is the frankly physical Dominic himself, serious but so fleshy and puffy he defines any generic conception. Most of Bermejo's people have this Everyman and Everywoman particularity. Dominic is both mortal and mysterious. Illusionistic niches pull us in, and a profusion of gold push us out. Fake architecture and the real three-dimensional tracery heighten the tension between fiction and reality.

The show and the catalogue cover the practical aspects of Bermejo’s career. Nomadic as he was, he often needed to collaborate with local artists to skirt a guild’s residency requirements. This leads to good lessons in connoisseurship, mostly with the unequal work of Martin Bernat in Zaragoza and Juan de Bonilla in Daroca. Bermejo might have been a Jewish convert to Christianity or a secret Jew, and this show wades nicely into what could be dark, roiling waters but pulls back, correctly so—we just don't know.

Bermejo was an iconographic adventurer, cryptic Jewishness or not. His Christ at the Tomb from the late 1460s depicts a nude Jesus with the sheerest loincloth I have ever seen, and an emancipated body that looks like it has been tortured and stuck in a hole for three days. When all of this is combined with gushing blood, he looks very much the man of flesh. 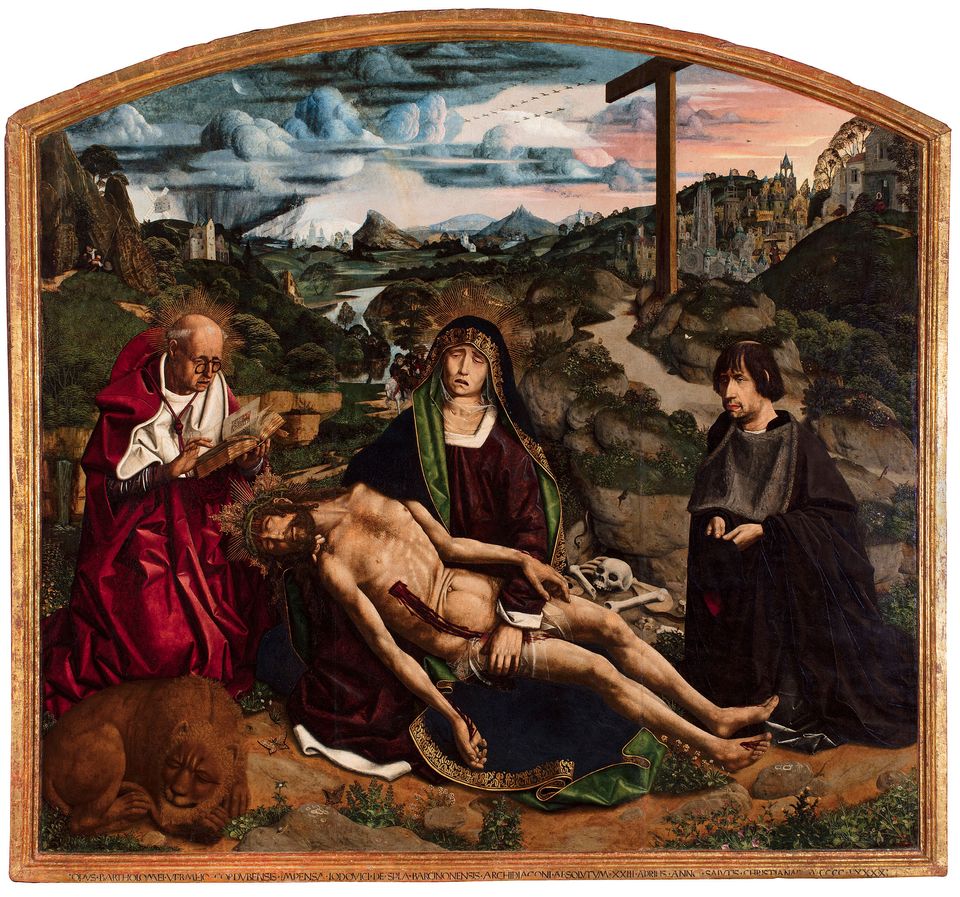 Part of Bermejo’s storytelling skill came from lucid composition. He packed a lot of obscure objects in his scenes, but they read clearly. This helps enrich Marian or Christological stories conveyed more simply by less skilled organisers. The Desplá Pieta (1490), has storylines supported by a stunningly realistic landscape filled with plants, insects, weather and buildings. Deciphering it all was a project fit for the circle of Lluis Desplá, the patron who was also a scholar and archdeacon.

Bermejo’s demons are, well, divine. Six of them in Descent of Christ into Limbo (around 1470s), convey six degrees of evil. One, with long iron spikes for teeth and a chain for a mouth, seems to pout as Jesus leads the Old Testament patriarchs out. In St Michael Triumphant over the Devil with the Donor Antoni Joan (1468), his first documented work, the devil is part lizard, part 1950s spaceship.

The Prado marks its 200th birthday this year. Many of the shows I have seen there in the last few years have the feel of the Bermejo show: elegant, intellectually incisive, focused, rich in both news and rarely seen art, and on the small side. It is art history at its best.