Ben Quilty: an artist on the frontline

As the Australian artist's major retrospective opens in Adelaide, we speak to him about his time as a war artist in Afghanistan and his campaign against the death penalty

At Ben Quilty’s big and enthusiastic exhibition opening at the Art Gallery of South Australia on 1 March, it became clear that a lot has happened to the Sydney-born artist in the past 10 years.

Sadly, a lot of it has been traumatic for the popular 45-year-old whose new survey show is simply called Quilty. Fortunately, the artist has been able to transfer much of his anguish into his strident, voluble canvases of which around 70 are on display at the Art Gallery of South Australia (AGSA). The exhibition will travel later this year.

If Quilty’s next decade matches his last, it will be packed. First there was Quilty’s mobilisation to Afghanistan with the Australian Defence Forces in 2011, under the Australian War Memorial’s official war artist scheme.

In becoming a war artist, Quilty joined the ranks of such esteemed Australian painters as Arthur Streeton and William Dargie. But witnessing the suppressed trauma of many of the Australian soldiers he mixed with in Afghanistan hit Quilty hard. On his return to Sydney, he made deeply psychological portraits of some of the service men and women he had met. And the portraits were not from memory. Quilty invited the enlisted men and women to come to his studio and sit for him. Many did. 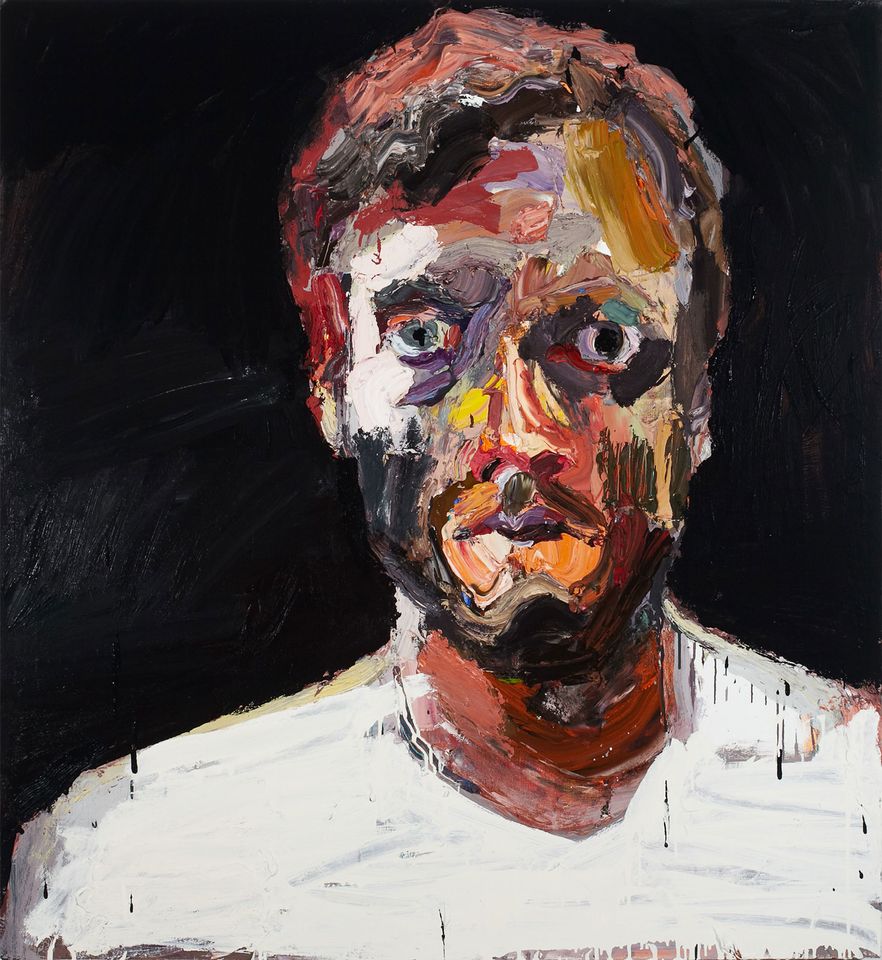 Some of the returned personnel trusted Quilty enough to pose for him nude. As they talked to him about their demons, Quilty painted the soldiers in tormented poses that externalised their inner turmoil.

That series resulted in a touring exhibition called After Afghanistan, which made Quilty’s name and set him on a quest to open the nation’s eyes to the human costs of combat.

“I think I was part of a movement to start acknowledging the social impacts of mental health issues that young men and women were having coming out of a war zone, which inevitably is a pretty strong anti-war statement,” Quilty says.

In 2012, Quilty met Myuran Sukumaran, an Australian on death row in Indonesia’s hellish Kerobokan prison. Sukumaran, whose family were Tamil refugees who settled in Sydney, had been convicted as one of the Bali Nine ring of drug smugglers. Quilty visited Sukumaran in prison and taught him to paint. Sukumaran went on to produce extraordinarily searing self portraits throughout his ordeal in Kerobokan.

Sukumaran and Quilty formed a close bond. Quilty believed that his friend had reformed. "It would be an unspeakable crime to execute him. The death penalty was a crime against humanity," he says. Quilty painted an evil-looking island that resembled a lurking sea creature, with Sukumaran standing in front of it, half turning to look at what it was—the place of his forthcoming execution.

Quilty led Sydney protests and vigils to stop the execution. He argued for his friend with politicians, and tried everything in his power to save the lives of Sukumaran and another member of the Bali Nine called Andrew Chan, who had become a pastor while in Kerobokan. The artist generated a storm of publicity, and was criticised harshly for standing up for drug smugglers. Others supported him mightily.

But Indonesian authorities were relentless. On 29 April 2015, on Nusa Kambangan island, Sukumaran and Chan were shot dead, leaving Quilty devastated. He organised a touring exhibition of Sukumaran’s art which premiered at the 2017 Sydney Festival.

“Myuran knew what his legacy was and he wanted that sent back to every country in the world that still executes people,” Quilty said at the time. 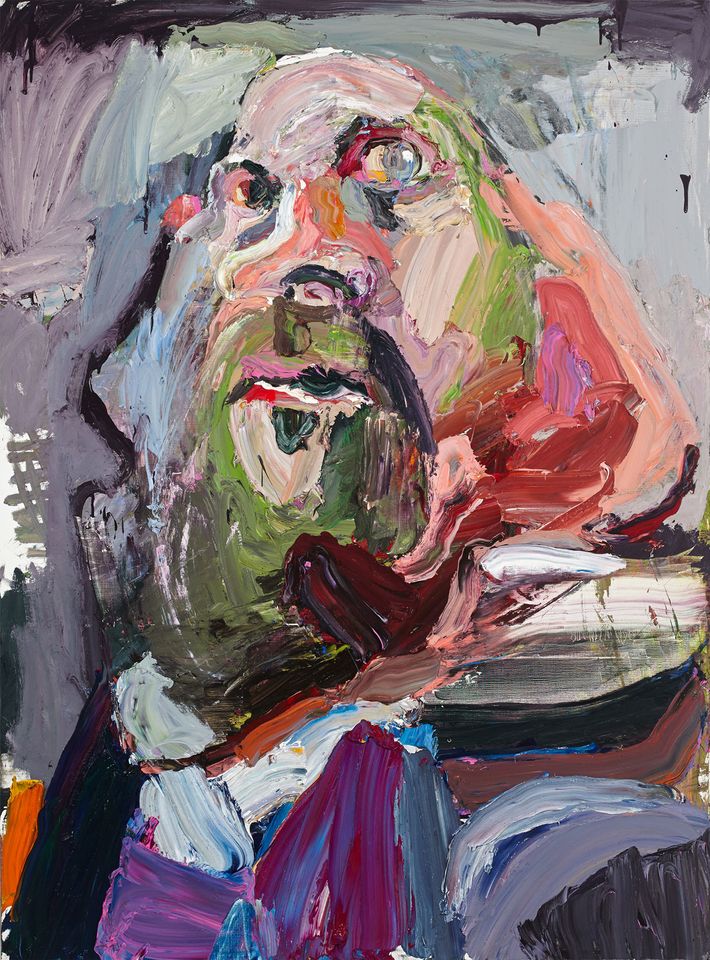 In 2016, Quilty and his friend the Australian author Richard Flanagan travelled to the Greek island of Lesbos where Syrian refugees were pouring ashore. Flanagan discovered that many discarded life vests were fake, and could never have saved anyone. The vests became an important symbol of inhumanity for Quilty, and a dozen of his paintings of the vests—each one virtually a portrait of struggle and trials—are in the AGSA exhibition.

Later in 2016, Quilty visited the APY Lands (Anangu Pitjantjatjara Yankunytjatjara) in far northern South Australia where he met indigenous artists such as Betty Pumani, Sylvia Ken and Maringka Baker. He is now close to these artists, and regards them as Australia’s greatest contemporary painters. Most Australians, however, would never have heard of them, he says.

Coincidentally, an exhibition called Yaritji Young and Tjala Arts: APY Lands is running from March 6 until April 14 at Olsen Gruin in New York. The gallery is a branch of a prominent Sydney art gallery. The exhibition includes work by Sylvia Ken and other APY artists.

The APY Lands are giving the love right back to Quilty. Vincent Namatjira, a young artist who lives in Indulkana in the APY Lands and whose great grandfather was the legendary but tragic Albert Namatjira, travelled 15 hours in a bus to be at Quilty’s opening at the AGSA. The pair are close friends.

Quilty said his connections with indigenous artists had “absolutely” changed his own art practice. For instance, he had begun working on some of his canvases from all four sides. The Last Supper No. 9, 2017, is an example of this new way of working.

With new paintings about the sites of historical massacres of indigenous people, and a Last Supper series depicting “world leaders getting drunk and arguing with each other while the world burns under their feet”, Quilty is still facing up to the big questions and producing confronting art.

At the exhibition opening, the show’s curator Dr Lisa Slade found a way to introduce some humour: “I’ve tinted the (gallery) walls with lilac to soften the blow,” she said.

AGSA director Rhana Devenport said Quilty was a “virtuosic painter”. The exhibition will travel to the state galleries of Brisbane and Sydney later this year.