Boom and bust in Kassel and Athens

Documenta 14 sets itself in opposition to neoliberalism and the art market — but will it pave the way to greater excess? 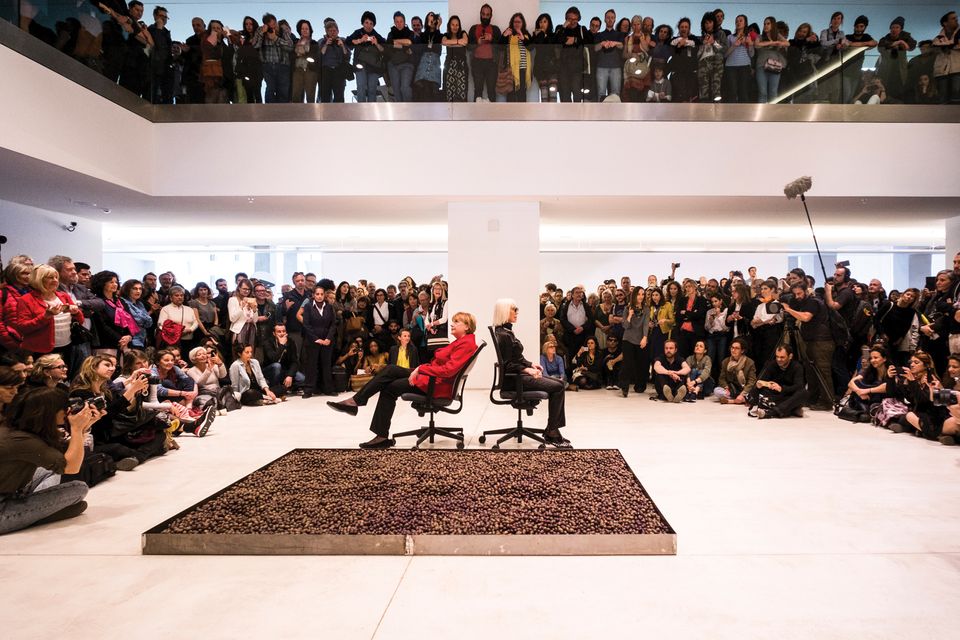 Marta Minujín’s Payment of Greek Debt to Germany with Olives and Art (2017) was on show in Athens Photo: Mathias Völzke

It’s unavoidable: the issues and politics that characterised the art of the 1970s are back. Christine Macel’s Venice Biennale (until 26 November) was dubbed the “hippy Biennale”, while Adam Szymczyk’s Documenta, which touches on many of the same themes, serves up an altogether angrier and more radical vision.

On a preview day in Kassel in June, Cecilia Vicuña, a Chilean artist in her late 60s, wrapped some of the women watching her performance in the trails of her long, red fleece sculptures. The titles of other works by Vicuña suggest that red refers to menstrual blood, while the act itself seemed to be a kind of pre-colonial female empowerment ritual.

The work is indicative of some of the themes of the show—gender and sexual rights, liberation struggles, immigration, colonialism, nationalism, environmentalism and the pernicious impact of unfettered capitalism—mostly by artists who are lesser known, or virtually unknown, even to the most travelled curators.

Vicuña’s work is large, colourful and prominently displayed in three of Documenta’s major venues. It is hard to miss. But it is unlikely that many will have seen all of this enormous exhibition. For the first time, it is split evenly between two cities 2,500km apart: Kassel and Athens (the latter section is now closed). What’s more, there are works by more than 150 living artists and collectives, plus contextual exhibits by a further 100 historic composers, poets and artists, all spread across 80 venues, some huge.

The decision to mount much of the exhibition in Athens was the most audacious of Szymczyk’s proposals, presented to Documenta’s international search committee in 2013. Since its inception in 1955, the exhibition, which reintroduced the Modern art vilified by the Nazis to the German public and which now aims to document the state of contemporary art, has been based in Kassel. While it has increasingly emphasised the work of artists beyond the Western European and North American canon (especially since Catherine David’s Documenta 10 in 1997), no one has gone so far as Szymczyk.

For him, Documenta should be “a continuum of aesthetic, economic, political and social experimentation”. In his catalogue essay, he refers to the weaponisation of debt to destroy welfare states, the market to promulgate war and, referring to the world financial crisis since 2008, to “the economic violence enacted… almost experimentally upon the population of Greece”. An exhibition with such a harsh critique of neoliberalism could not have stayed comfortably in Germany, the dominant European Union economy. For those who could see both cities, Athens proved a crucial part of the experience—especially considering the discomfiting pairing of sleeping refugees on the outskirts of the city with elegant exhibition venues like the Benaki Museum.

Unofficially, the Argentinian artist Marta Minujín was the poster artist for the exhibition. A re-creation of her 1983 Parthenon of Books—a huge metal structure decorated with banned books that she originally made as the dictatorship fell in Buenos Aires—has been built in front of the Fridericianum in Kassel. In the new National Museum of Contemporary Art in Athens, Minujín had some knockabout political fun with a work titled Payment of Greek Debt to Germany in Olives and Art (2017) that included a lookalike actor dressed as the German leader Angela Merkel. 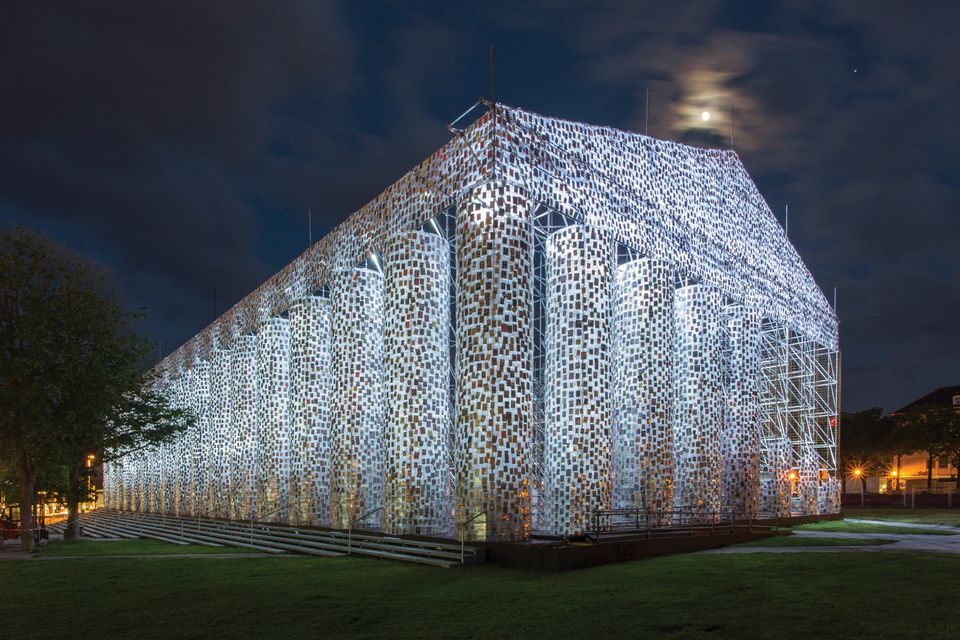 Marta Minujín's The Parthenon of Books (2017) on show in Kassel Photo: Roman März

As is often the case with Documenta, good use is made of venues, which are employed with a political charge. In Kassel, an architecturally dull former “frontier” town close to the border with the old Eastern bloc, organisers have taken over the Brutalist Neue Hauptpost, a former post office made vacant by “the partial privatisation and digitisation of mail services”. Curators temporarily renamed it the Neue Neue Galerie, now the biggest new venue in the city. The Brutalist setting suits the work of the New York-based artist Maria Hassibi, who creates compelling performances in which her tortured dancers bend, sit and roll through space with extreme slowness.

Documenta is primarily a chance to see works by lesser-known artists from around the world. In the Odeion, Athens’s conservatory (one of the city’s best venues), the Nigerian artist Emeka Ogboh installed an evocative sound and digital light work. The installation filled the concrete concert hall with the sounds of traditional Greek singing, while a digital tickertape around the room flickered with stock market data.

Yet some of the standout works came from established artists. Pope.L’s Whispering Campaign (2017) uses performers and public address systems (one was installed inside a parked car) to “whisper” out conversations between the artist, immigrants and refugees. Sometimes it consisted of single repeated words like “shame”. Meanwhile, Artur Zmijewski’s film Glimpse (2016-17) starts with slow close-ups of refugees in the Calais Jungle and later shows him painting white crosses on their backs and posing them in a way that is truly disturbing.

But this is a Documenta in which big-name artists and the spectacular, immersive or indeed humorous is generally out, while work made from cheap, found and repurposed materials is in. These traits, combined with the large amount of work in both exhibitions—including long, lo-fi, documentary-style videos and large amounts of archival material in table-top cases—makes it hard work for viewers at times. 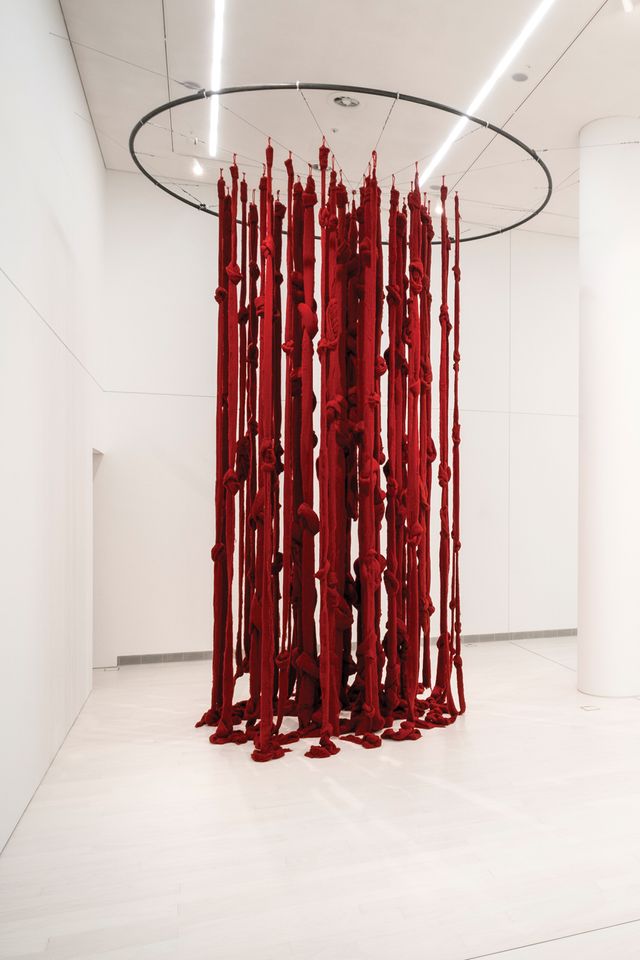 In Greece, a set of legal papers records Maria Eichhorn’s attempts to change the legal status of a Neo-Classical building she bought into an “unowned property” that could not again be bought and sold. In Germany, she uses the paperwork surrounding the confiscation of the art collection of a Jewish citizen of Kassel, Alexander Fiorino, in 1939, to present a large installation highlighting the fact that these, like many other works auctioned in the Nazi era, are still “missing”. (In reality, as the Gurlitt case shows, many are probably still in private hands or idling away in museum stores.)

Given the nature of curatorial work, it is understandable that organisers of such shows often love archives, sketchbooks, plans and documentation. But this professional passion can be overwhelming. What are we to make of a set of vitrines by Olu Oguibe containing books, posters and vinyl records about the Biafran war? Or the page after page of scores for performances by Jani Christou and Lawrence and Anna Halprin?

At the press conference in Kassel, the curator Natasha Ginwala described a work by Hiwa K. as “rejecting the sure-footed verticality of a hypermasculine virtuosity”. A similar rejection of the technically showy art that is most successful on the market pervades the exhibition. It is not, of course, the curators’ fault that the market has a habit of adapting and that featured artists such as Geta Bratescu have been snapped up by Hauser & Wirth. Nevertheless, the general lack of sensuality, emotion or overt virtuosity is probably the reason that many have found Documenta harder to swallow than, say, Okwui Enwezor’s powerful critique of capitalism at the 2015 Venice Biennale, despite some crossover in the themes of the shows.

We are in a turbulent era and, with the pervasive presence of the same high-value artists in museum shows, auctions and art fairs, it makes sense for curators to argue for the social and political values of art. Yet the difficulty for Documenta is that the art of the 1970s—radical, conceptual, ephemeral, often crudely made—was in part a reaction to booming US capitalism, individualism and the triumph of American painting in Abstract Expressionism. The perceived dryness (some might say dreariness) of much of the conceptual art of that decade paved the way for even greater excess: Jeff Koons, Damien Hirst, Takashi Murakami. This Documenta sees itself as a universal call to action. The danger is that it is just another revolution in the art world’s ongoing spin cycle.