Cosmic collectors: how the Guggenheim family came into its art

Visitors to the Solomon R. Guggenheim Museum in New York tend to think more about Frank Lloyd Wright than about the man for whom the institution is named. With Visionaries: Creating a Modern Guggenheim, the museum is out to readjust that assumption, to a point.

On view along the walls of Wright’s inescapable sloping ramp (and in some other galleries) are more than 170 objects from the permanent collections of the Guggenheim Museum in the York and the Peggy Guggenheim Collection in Venice. The show marks 80 years since the Guggenheim Foundation was formed.

If you visit Venice, you’re accustomed to seeing Peggy Guggenheim’s collection as an ensemble. Not so with the New York collection in Manhattan (although works from the holdings of the dealer Justin Thannhauser have dedicated galleries), so the show offers some surprises to those who thought they knew what the museum owned.

The title, Visionaries, refers to artists and collectors. It affirms the sad truth that we almost always know the artists who created the works in a museum collection better than the men and women who purchased or donated them.

Solomon Robert Guggenheim (1861-1949) made his fortune in mining and turned to art in a systematic way at the age of 68 in 1929. Guiding him for the next 20 years was the German-born Hilla Rebay, a collagist, Theosophist and polemicist who had a passion for European abstraction. (Her fervor for non-objective art did not, however, keep Rebay from painting a conventional portrait of Guggenheim in 1928, a year before she signed on as his adviser.)

Guggenheim supported her companion, Rudolf Bauer, an abstract painter exhibited in the show, for a decade in exchange for paintings (which came out of storage for this exhibition), but Bauer’s stipend had more to do with Rebay’s lobbying than with his talent.

Rebay’s peccadillos became the subject of art world gossip and were recounted by security guards from the Museum of Non-Objective Painting on East 54th Street, the precursor to the Guggenheim. Among those guards were the painters Jackson Pollock, Leland Bell and Robert De Niro Sr. The imperious woman was known for having paintings brought to her and for uttering the ultimate accolade—“Kosmik"— or the withering condemnation, “nicht kosmik.” “Nicht kosmik” works had to go elsewhere to find their place in history.

Solomon Guggenheim bought art in great volume, especially when it came to works by Rebay herself, a few of which are on the walls. In 1949, when he was diagnosed with cancer, Guggenheim reiterated his support for her, writing: “It is my further wish that during the lifetime of Miss Rebay the Foundation accept no gifts and make no purchases of paintings without her approval, and that after her death the Foundation make no addition to its collections of paintings, unless they come from Mr. Bauer.”

That wish was not honored. After Guggenheim died that year, his family had other ideas. Rebay resigned as the museum’s director in 1952, but remained a trustee. 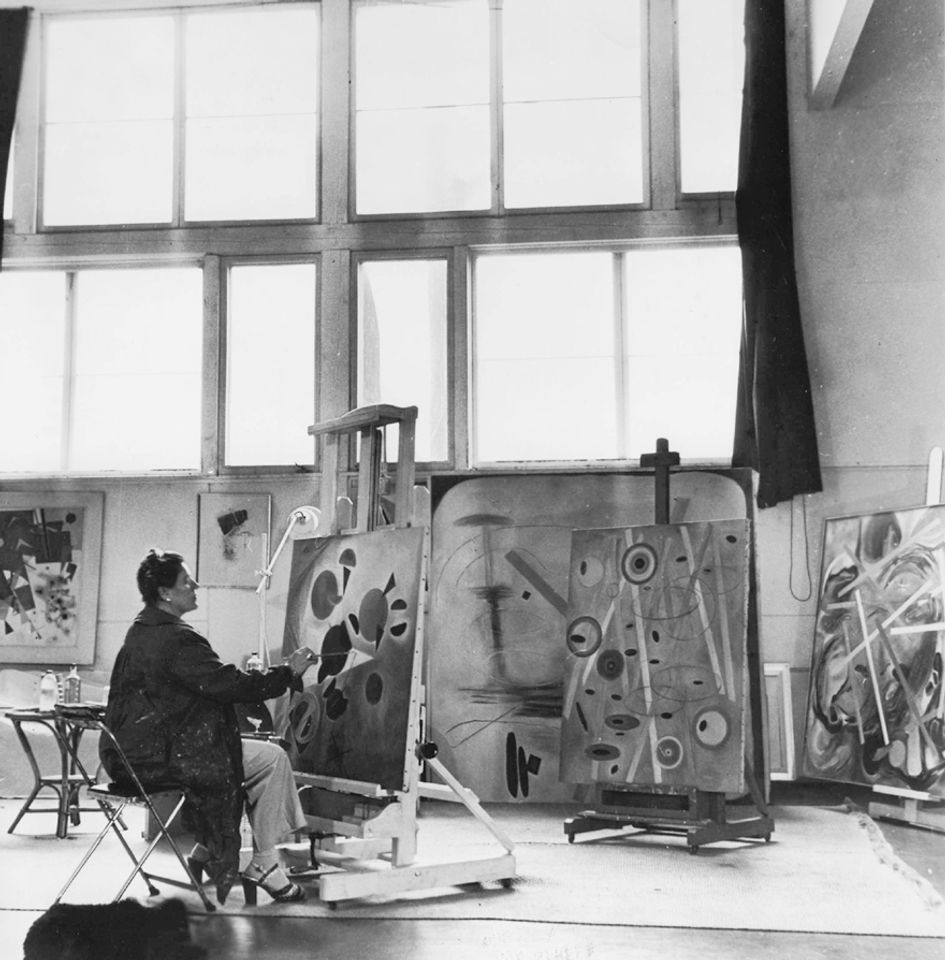 If there is a signature artist for the Guggenheim, it is Frank Lloyd Wright, creator of the museum’s most important work of art, who first came to Guggenheim’s attention through Rebay. But among the artists on the walls, it is Vasily Kandinsky (1866-1944), who is represented by 11 paintings made from 1909-36. Black Lines (1913) is a concentration of orbs in bright colors, each of which seems to have been made by a single brush stroke, with black horizontal marks inscribed on its surface. If that is not kosmik enough, there is Several Circles (1926), which seems inspired by the orbits of planets in space and is dreamy enough to escape the literalism of celestial bodies in motion.

Piet Mondrian, another pioneer of abstraction, is represented by four works, two of which come from around the time of the First World War. In Tableau No 2/Composition No. VII (1913), lightly painted rectangular shapes converge in the center of the canvas. Composition 8 (1914) alternates grey-green rectangles with pink forms. The other two Mondrian paintings, from 1929 and 1930, reflect the artist’s journey toward bright colors and emphatic squares that led to Broadway Boogie Woogie (1942-43, from the Museum of Modern Art).

Mondrian had lots of company in his quest for abstraction, as artists ventured into that huge grey area between representation and its negation. One picture that visitors will remember is a 1909 Cubist work by Pablo Picasso, Carafe, Jug and Fruit Bowl, painted during a stay in an isolated Spanish village. The work has as much pictorial elegance as anything from the same period that was part of Leonard Lauder's collection, which he gave to the Metropolitan Museum in 2013.

For more adventurous Cubism, there is Picasso’s Bottles and Glasses (1911-12), his Accordionist, from 1911 and Fernand Léger’s Nude Model in the Studio (1912-13). Also from 1911—and striking in its jolting color and whimsy—is Franz Marc’s Yellow Cow, which seems to share the same imaginary space as do paintings by Marc Chagall farther up the ramp.

In between these works, visitors will discover (maybe rediscover) the salon Cubist Albert Gleizes, the filmmaker Oskar Fischinger (who tried to convert Hollywood to abstraction) and a low-lying froglike sculpture in black by Alberto Giacometti, Woman with Her Throat Cut (1932, cast in 1940), which seems like a blueprint for later works by Louise Bourgeois.

Yet on the ramp toward Jackson Pollock, who closes the show at its pinnacle with three paintings from the Peggy Guggenheim Collection, two artists stand out. Paul Klee—nothing if not “kosmik”—painted Red Balloon (1922), which is more a game than a study, with spheres and squares. His Arches of the Bridge Stepping Out of Line (1937) animates architectural elements on a cloth background, anticipating the playfulness of Keith Haring by 50 years.

Like Klee, Alexander Calder stands apart from manifestos and movements in Visonaries. His 1941 mobile from the Peggy Guggenheim Foundation, Arc of Petals, was made in a year when the world was coming apart. It is the graceful work of an American engineer drawn to European art, a delicate ode to freedom and regeneration. Lit elegantly at the Guggenheim, its leaf-like elements form a ballet of reflections on the gallery floor. Now that’s kosmik.

David D’Arcy is a correspondent for The Art Newspaper