Drawing the mercurial mind: book poses Michelangelo’s draughtsmanship as the key to his life and works 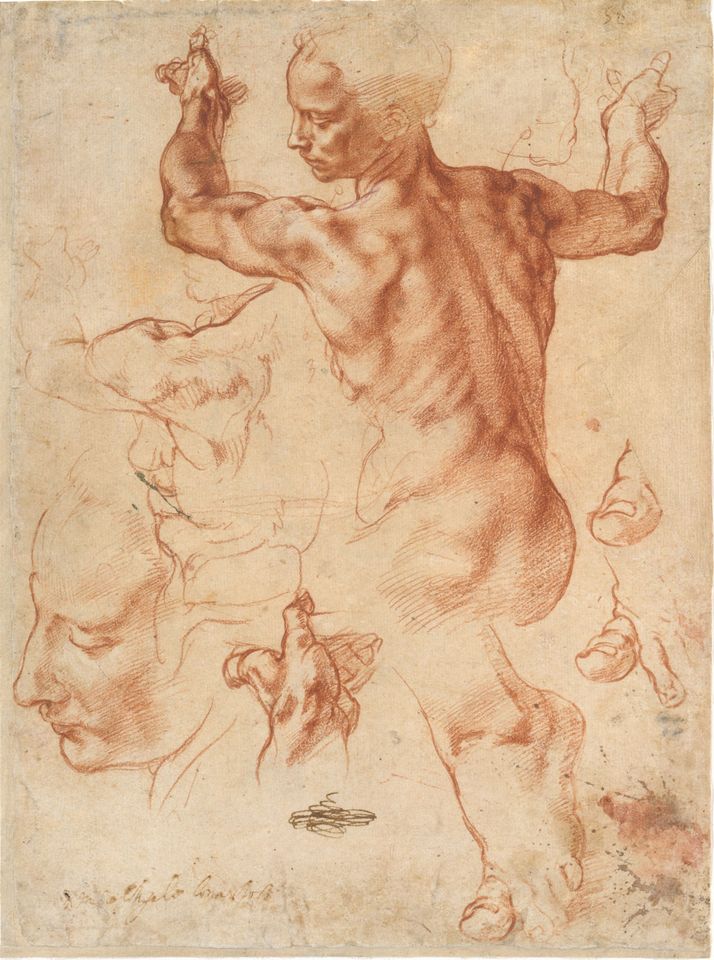 Michelangelo’s focus on the expressive power of the human body is evident in this sequence of red chalk drawings on a sheet that survived the destruction of many Sistine Chapel ceiling studies: Michelangelo, Studies for the Libyan Sibyl (around 1510-11) Courtesy of the Metropolitan Museum of Art, New York (24.197.2 recto)

The sheer scale of the exhibition at the Metropolitan Museum earlier this year suggests its ambition of presenting a comprehensive view through drawing of Michelangelo’s lengthy artistic career, although the exhibition’s visual narrative also includes some carefully chosen paintings, sculpture and other works either by the artist or in the main attesting to the impact of his inventions and designs. Drawing—in its dual identity as the art of design, fundamental to all the arts, and as a gestural act, whether functional or virtuoso—is the key to understanding the thoughts, motivations and creativity of this towering figure. Michelangelo was called “divino” by Ariosto in Orlando Furioso (1516). Different types of studies from incisive, finely hatched forms—exercises in interpretation both of Quattrocento prototypes and of the graphic language developed by Domenico Ghirlandaio—to tremulous grainy chalk marks that shape figures convulsed with emotion, bracket Michelangelo’s 75 years of making drawings. Over these decades, his ambitions as a sculptor and architect were often thwarted by the changing demands of successive popes or by political upheavals, while his work as a painter usually went against the grain of his inclinations, later stimulating the talents and ambitions of others, notably Sebastiano del Piombo and Daniele da Volterra, with ideas and designs expressed in drawings.

Michelangelo’s attitude to his drawings seems mercurial, evoking his pride and vulnerability: he guarded them almost obsessively from the sight of others and, in at least two campaigns of destruction, he burned both sketches and finished large-scale drawings or cartoons—the beauty and elaboration of the few surviving red chalk figure studies for the Sistine Chapel ceiling are a reminder of the extent of this loss. Yet, when he made highly personal gifts of elaborately executed and conceptually challenging drawings for intimate friends, particularly Tommaso dei Cavalieri and Vittoria Colonna, Michelangelo seems to have been relaxed about their further viewing or reproduction in other art forms. It is striking how few of his celebrated figural inventions circulated through prints (only a handful of engravings appeared with figures extracted from works such as the Bathers or the Sistine Chapel ceiling frescoes); and equally remarkable that prints after deeply private gifts such as the Tityus, Ganymede, or Phaeton were on the market by the 1540s. The exhibition and its accompanying book effectively convey the complexities of Michelangelo’s use of drawing for painting, sculpture and architecture as a mode of inventing, planning, observing, recollecting or of demonstration, including an emphasis on the relation of drawing and text as sketches appear intertwined with or overlaying letters, drafts of poems or functional notations. His obsessive concern in drawing is with the expressive human body and the eloquence of architectural forms, in each context exploiting the qualities of his chosen medium and pushing against the limitations of accepted conventions to achieve innovative and moving effects.

This handsome volume records the exhibition it celebrates by including a scrupulously detailed checklist of the 246 works of art on display, with technical descriptions, provenance and select (though usually extensive) bibliography by Carmen Bambach with Jeffrey Fraiman and Furio Rinaldi. The book offers a lasting contribution to Michelangelo scholarship in the form of an exploration in eight chapters by Bambach of Michelangelo’s life, art and fame; two perceptive and complementary essays on Michelangelo’s architectural drawings and designs by Caroline Elam and by Mauro Mussolin; a deeply considered essay on questions of style and historical evaluation in relation to Michelangelo’s non-canonical or “minor” sculpture by Francesco Caglioti; a rich presentation by Marcella Marongiu of the career and interests of Tommaso dei Cavalieri and his continuing close friendship with Michelangelo; and Claire Barry’s presentation of new data from the technical investigation of the Torment of St Anthony (Kimbell Art Museum).

Questions of survival always bedevil Renaissance drawings studies: Paul Joannides once calculated that Michelangelo— who is recorded drawing in the cold for hours, aged 86, to the point of injuring himself—could easily have made 20,000 or so drawings over his lifetime, yet perhaps about 600 sheets have come down to us. The vicissitudes of survival beyond inadvertent or intended destruction are also linked to the artist’s status, to changing tastes, and to the activities of members of the Buonarroti family in preserving Michelangelo’s memory. Questions of authorship have equally exercised scholars, especially from the time of Bernard Berenson, but more notably in late 20th-century studies when Alexander Perrig proposed a radical shrinkage of the corpus, a revisionist trend that still has some following, although this is vigorously countered by Bambach. She sensitively outlines the rich legacy of Michelangelo scholarship—its contours also shaped by the artist’s fame and multiple early biographies—framing her presentation with an emphasis on the need to ground opinions of authenticity on an understanding of the wide range of types of drawings, their functions and their material qualities as layered artefacts. Her own attributions or revised datings are thoughtfully proposed, with contrary views acknowledged in the extensive notes (themselves mines of information on historical and literary contexts). Throughout, Bambach’s sensitive and cogent study of “the divine draftsman” weaves observations on Michelangelo’s purpose, approach, choice of material, handling and style with important information on technique, on the physical condition of sheets and on their afterlife.

The view of Michelangelo that emerges is not only that of the solitary, thwarted genius: in keeping with recent scholarship, strong ties of family, friendship and collaboration are underlined, not only in relation to Michelangelo’s proud sense of Buonarroti family honour, or his calling of compatriots to work with him on the Sistine Chapel ceiling, but also in his long-standing, often generous relations with skilled craftsmen, some of whom assisted on sculptural projects over decades. Despite his rebarbative and depressive nature, Michelangelo could command extraordinary affection, trust and loyalty, from patrons as much as from students. Bambach reflects on the artist’s “audacia”, seen in the sheer scale of his ambition, his boldness of vision and wilful courage; this resonates with his transgressive approach to architectural forms as discussed by Elam, and his imaginative shaping of architectural spaces described by Mussolin. In turning the pages of this book, the intricate gift drawings and the expansively muscular or hauntingly compressed figure studies retain their fascination as meditations on the human form in its beauty and fragility. The book’s real achievement is the integration of the figural and the architectural through the attentive analysis of fragments as much as substantial designs. It simultaneously integrates related texts and representations in a treatment of the drawings in their historic materiality and as palimpsests of the artist’s thoughts and creativity.

• Catherine Whistler is the Keeper of Western Art at the Ashmolean Museum and a Fellow of St John’s College, Oxford. Her recent publications include Venice and Drawing 1500-1800: Theory, Practice and Collecting (2016). She is currently working with Ben Thomas, of the University of Kent, on a research project on Raphael and the eloquence of drawing, which includes the Ashmolean’s recent exhibition: Raphael: the Drawings (2017)

Appeared in The Art Newspaper, 301 May 2018
More ReviewTopicsReviewMetropolitan Museum of ArtMichelangelo