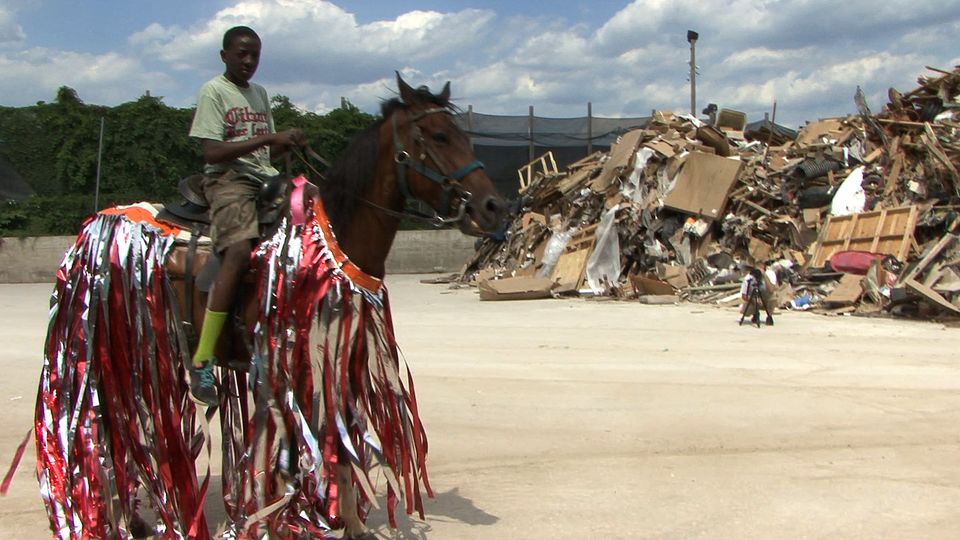 This survey show of the Algerian-French photographer and sound artist Mohammed Bourouissa takes its title from the invented word "hara", used by Arab drug dealers in Marseille to warn of approaching police. The word rings out from speakers placed around the open air terrace of Goldsmiths CCA, surrounding the viewer in spoken language that is extremely charged, yet nonsensical. As this show attests, the impulse to both expand and complicate our understanding of peripheral classes is central to Bourouissa's practice, through which he examines the immigrant experience and the racial and post-colonial dynamics that underpin it. Ranging from 2003-2020, the works include Bourouissa's 2006-2008 photography series Péripherique, which won him last year's Deutsche Börse Prize. Depicting life in Paris's deprived suburbs, they show drug deals, burning cars and tracksuited youths to pierce the idea of the pristine and white city that exists in our popular imagination. A similar intervention is made via an 18-minute-long film Horse Day (2014-15). It shows a rodeo organised by a group of Black horse stable workers in North Philadelphia and addresses the whitewashing of the cowboy (many of whom were Black, Latino and Native American) in Hollywood cinema. Creating a contemporary American Western movie that is romantic, defiant and unexpectedly funny (many of the horses are painted in lurid patterns and colours) Bourouissa reframes the USA as jointly conquered, and jointly owned, by all Americans. 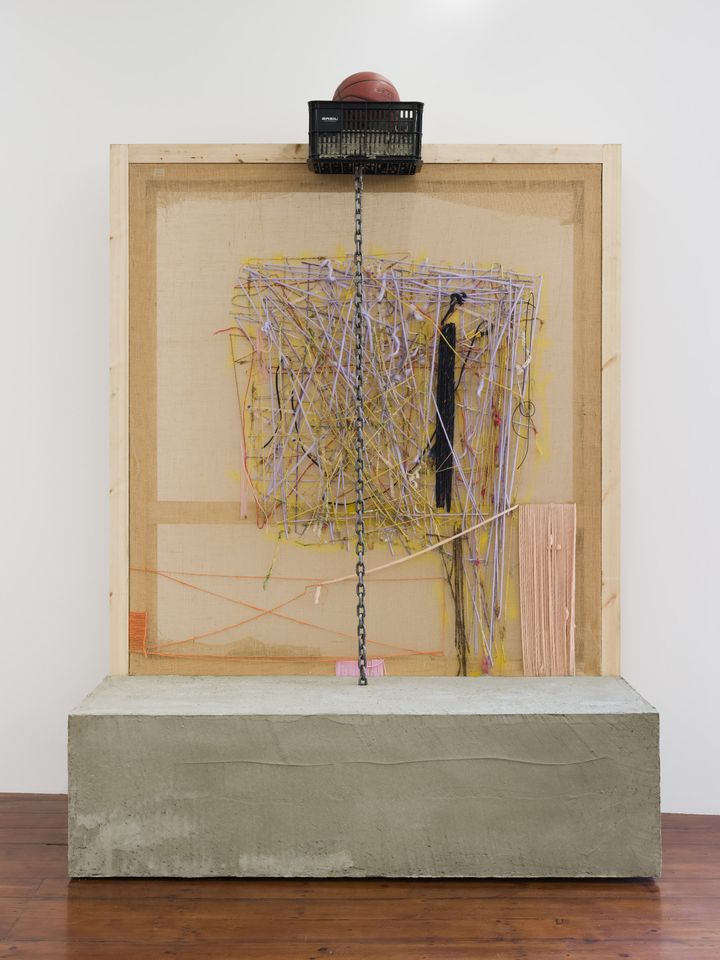 Alvaro Barrington's Street dreams are made of basketball (2021)

The past 18 months have been a busy time for Alvaro Barrington, who has not one but two solo shows at Emalin. In the gallery's main space are painting and concrete-based works, including Street dreams are made of basketball (2021). On the frame of a canvas criss-crossed with coloured thread Barrington has placed a basketball inside a plastic crate. A taut metal chain extends like a spine from the crate to a hulking slab of concrete at the work's base, linking together the urban and the domestic spheres. An accompanying series of small, figurative acrylic-on-textile paintings based on Tiktoks bear hurried daubs of bright colours to evoke the immediate and ephemeral nature of a one minute-long video. In one, a Black figure raises their hand: it is unclear whether this is part of a choreographed viral dance move or a symbol of political resistance.

In a second space a two minute walk away, Barrington is showing a series of imposing mixed-media works on whose concrete facades he has scrawled lyrics from the debut album of the late American rapper DMX. No stranger to borrowing from other artists, Barrington merges DMX's reflections on growing up poor in New York City with the childlike nature of mark making in wet cement to reflect on questions of ownership and industrialisation during the 1990s—a time of significant gentrification within the city. Embedded inside these dense, rough concrete frames are smaller acrylic paintings that invite a second, more intimate viewing experience. 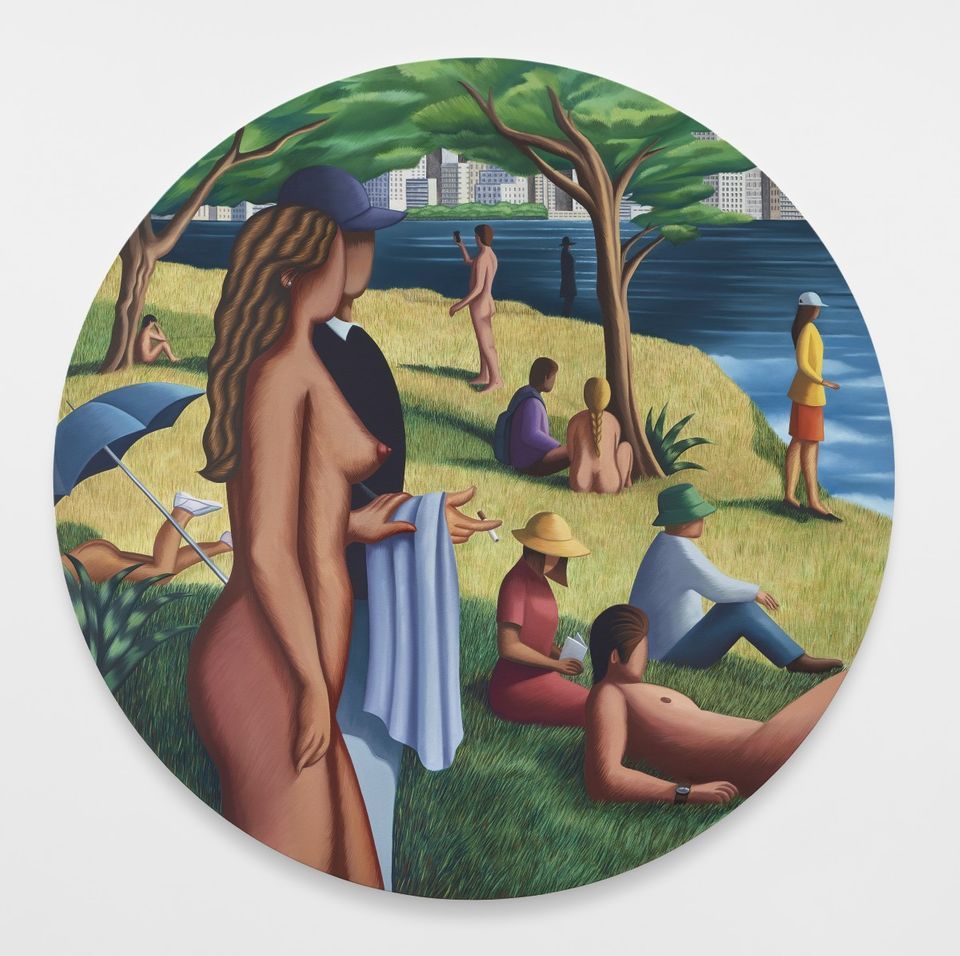 Julie Curtiss's star has risen fast over the past two years. Following a spate of astounding auction results that transformed her from emerging artist to market darling at breakneck speed, she signed to White Cube in February 2020. Unsurprisingly, her highly anticipated first UK solo show doesn't veer far from the style that has brought her mega success. Bringing together a group of new oil paintings, monochrome gouaches and small sculptures, it delivers an uneasy balance of the grotesque, absurd and captivating. Le Futur (2021), painted on a circular canvas, is Curtiss's Surrealist take on Seurat's masterpiece A Sunday Afternoon on the Island of La Grande Jatte (1886), in which flesh is disquietingly painted to resemble the texture of sleek fur. In Coldroom 1 and 2 (2020), the bloody carcasses of cows are too replaced with flowing, shiny waves resembling chestnut locks. The resultant tone is both sterile and obscene, repulsive yet transfixing.