The artist worked with obsessional care, but only now is his versatility being recognised 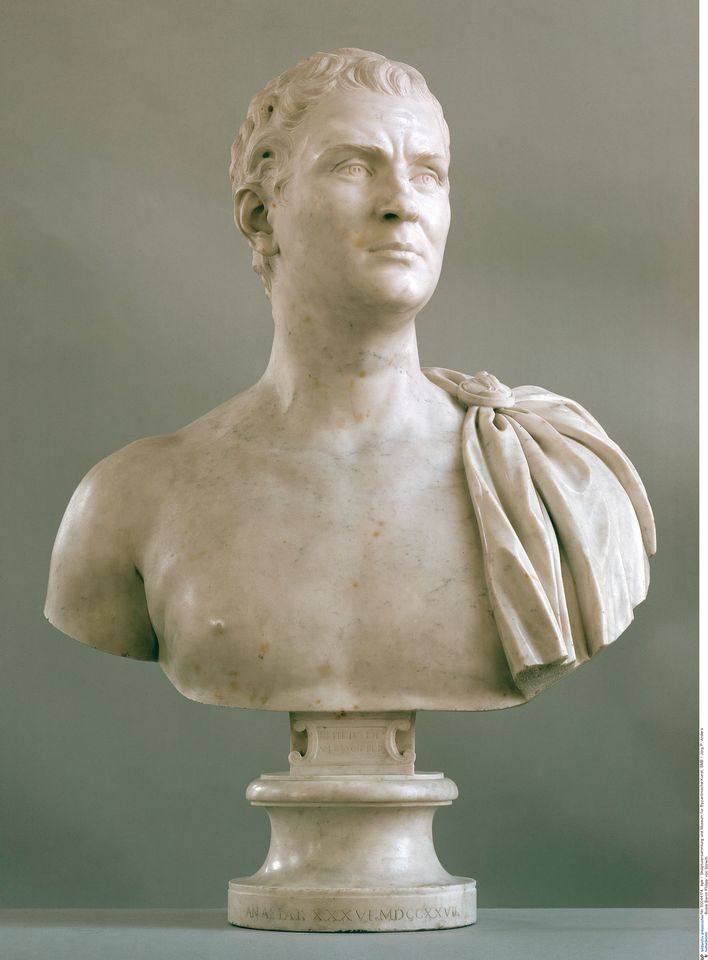 Edme Bouchardon's magnificent bust of the antiquary and spy Baron Philipp von Stosch (1717). It is one of several masterpieces of portraiture created by the young sculptor during his nine-year sojourn in Rome, between 1723 and 1732 (Image: Courtesy of Staatliche Museen zu Berlin, Kupferstichkabinett © BPK, Berlin, Dist. RMN-Grand Palais / Jörg P. Anders)

Edme Bouchardon 1698-1762: Une idée du beau was the catalogue for the recent exhibition at the Musée du Louvre, which has been translated as Bouchardon: Royal Artist of the Enlightenment for the exhibition that has transferred to the J. Paul Getty Museum in Los Angeles (until 2 April). Thanks to its thorough coverage of his life and work, they may be regarded as a monograph on this gifted sculptor and draughtsman, especially when taken with Juliette Trey’s new catalogue of the Louvre’s huge holdings of Bouchardon’s drawings. The Getty edition of the exhibition is accompanied by a more narrative monograph written by Édouard Kopp and focussing on Bouchardon’s drawings, The Learned Draftsman: Edme Bouchardon.

Hardly a household name today, in his lifetime Bouchardon was regarded by many critics in France as the greatest sculptor of his age. He is often cited as a precursor of later 18th-century Neo-Classicism but, as the catalogue demonstrates, this is perhaps a simplistic assessment, and certainly by no means the whole picture. Born in Chaumont in the Haute-Marne, Bouchardon spent nine formative years at the Académie de France in Rome, before returning to France, where he settled in Paris and was quickly appointed sculpteur du roi.

Bouchardon lived something of a charmed life, singled out for favours by the directors of the Academy in Rome, once in Paris quickly elected a member of the Académie Royale and actively supported by those leading lights within the city’s artistic and intellectual circles, the comte de Caylus and Jean-Pierre Mariette.

Bouchardon adopted an ascetic lifestyle entirely dedicated to his art; he seems to have been successful enough not to have been over-hampered by the necessity to take on whatever work he could find. On the contrary, he took an almost obsessive care over the preparation and finishing of his work, from his drawings to more important commissions, notably the great bronze equestrian statue of Louis XV, destroyed in 1792, apart from the king’s right hand. This surviving fragment is remarkably finely worked for a sculpture originally some 30ft or more from the ground. It bears out the comment of one of those less well-disposed towards Bouchardon, the engraver Charles-Nicolas Cochin, who wrote that the sculptor had wanted his monument to be “filed down and chiselled all over, and finally finished off as if it were some piece of goldsmith’s work”.

Bouchardon’s approach to preparing his monument of the king can be seen in dozens of preparatory drawings, including some anatomical studies of horses that anticipate those of George Stubbs. His drawings in fact form as important an element of his achievement as his sculpture. Their flavour is much the same as that of the sculpture; highly inventive, carefully conceived and finished, extremely graceful and beautiful, if on occasion a little bloodless. His most famous sculpture today, a sinuous and highly sophisticated marble statue depicting Cupid fashioning a bow from Hercules’ club, was criticised by contemporaries for the coldness of its execution; perhaps this was one of the reasons it displeased Louis XV, who had it moved from Versailles to a corner of the Château de Choisy.

Like the painter François Boucher, with whom there are some parallels, Bouchardon was especially interested in the dissemination of his work through the medium of engraving. Many of his drawings were published in this way, including two suites of vases and the remarkable five suites of the Cries of Paris, the preparatory drawings for which reside in the British Museum. Entirely lacking in the romantic sentimentality often associated with this type of subject, these fine works show a deep sympathy for the poorer classes of the city.

Bouchardon was not an especially prolific sculptor. As with most French sculptors from before the Revolution, some of his most important works, notably the Louis XV monument, have been destroyed or otherwise lost. Fortunately, two of his main achievements in Paris do survive in situ, the enormous Fountain of the Four Seasons on the rue de Grenelle, and the series of over-lifesize statues of Christ, the Virgin Mary and the Apostles in the church of Saint-Sulpice. Those of Christ and the Virgin demonstrate, in their quiet intensity, Bouchardon’s gifts as a sculptor at their best. He was a brilliant portrait sculptor, but made rather few portrait busts, mostly in Rome, including a remarkable group of British subjects. The busts of the connoisseur and spy Baron Philipp von Stosch, the Scottish aristocrat John Gordon of Invergordon, or Madame Vleughels, wife of the director of the French academy in Rome, are quite exceptional for their remarkable sense of presence. The catalogue is written by a team of leading scholars whose contributions are well integrated with one another. It begins with a series of essays dealing with Bouchardon’s life, the context within which he was working both in Rome and in Paris, and the collecting of his works. The main catalogue is divided into sections partly determined by the chronology of his career, partly by types of work, for example book illustrations or religious sculpture. Major single projects such as the Cries of Paris, the rue de Grenelle fountain or the Louis XV monument are the subject of dedicated chapters. A chronology at the end provides a useful summary of the sculptor’s career. With illustrations of excellent quality, Bouchardon is well served by this fine catalogue which, with its comprehensive survey of the life and work, should win new admirers for this innovative and most interesting artist. For those readers who prefer a more narrative approach to his life and work and are interested in Bourchardon the draughtsman, Édouard Kopp’s publication makes an excellent alternative.

• Jeremy Warren is a specialist in European sculpture and in the history of collecting. He wrote the catalogues of the Wallace Collection’s Italian and of the Ashmolean’s Medieval and Renaissance sculpture

Bouchardon: Royal Artist of the Enlightenment