From Koolhaas and the countryside gang, a departure from radical urbanism 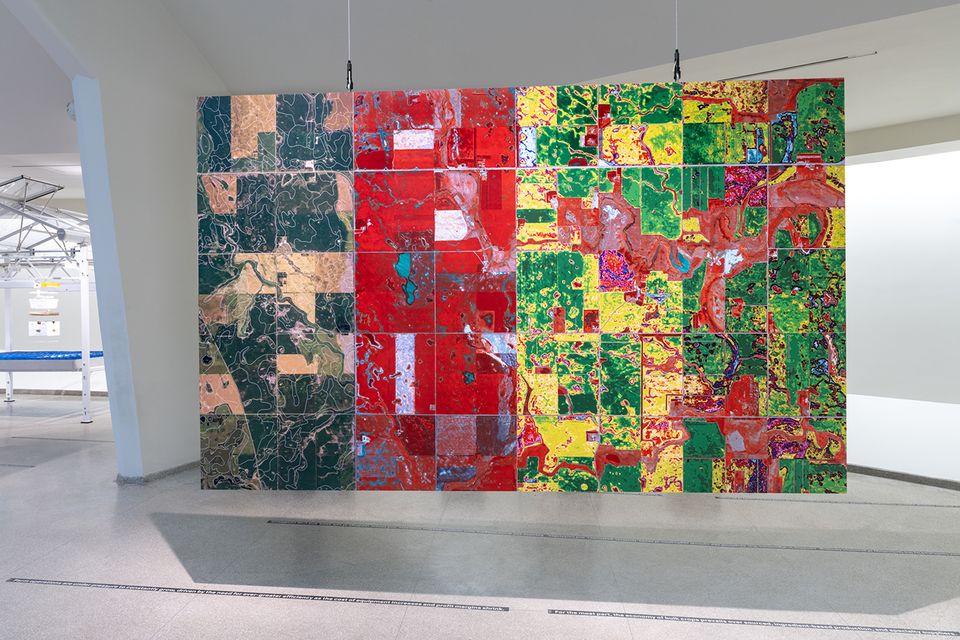 The Dutch architect Rem Koolhaas has taken Manhattan on several occasions. Delirious New York, the book that brought him international attention, was a love letter to the city published in 1978. In it, he extolled the drama of density and the chaotic complexities of its urban make-up, and even designated himself “Manhattan’s ghost writer”—a big claim when applied to a city that hadn’t demonstrated too much trouble acknowledging its own superpower. In 2001, he unveiled the Prada Epicenter (store? Oh please!) in what had once been the Guggenheim’s Soho space, and rewrote the rules of what we might expect from retail: an interior that offered more experience than shopping, and a main feature—a huge zebra wood wave—borrowed from the punky urban world of skateboarding. Since then, the practice he first co-founded in 1975, OMA (Office for Metropolitan Architecture) has filled in only one Manhattan gap on East 22nd Street with something residential that is suitably angular and expensive.

This week, in what you might call a volte face from radical urbanism, he returned to the Guggenheim, this time to the Frank Lloyd Wright original, with an exhibition called Countryside, The Future. “I am sorry if I seem to be inconsistent,” he said apologetically at Tuesday night’s initial private view for the museum’s patrons and the city’s cultural luminaries. He went on to explain that, since hearing various United Nations announcements, including one stating that 60% of the world’s population would be living in urban environments by 2030, we would do well to look at the places they are leaving behind.

Koolhaas is far from inconsistent—rather, he is a man on a continual mission to be relevant. He started out as a scriptwriter and journalist; made his reputation through a book, not a building; expanded that reputation as a groundbreaking theoretical urbanist; and really only became a practicing architect once he was widely accepted as a bona fide prophet. Now, as behoves one who has shaped both thinking and building, he both has and has not joined in on the next big thing. While climate change and environmental issues dominate the conversation, Koolhaas seems to have invented his own version of it.

A wall heaving with hundreds of questions—Who thought of free time? Can a condition be urban without people? Why do we avoid death?—clarifies Koolhaas’s role in all this as quiz master rather than the quizzee.

So, to the Guggenheim, where a shiny new tractor that can be controlled from an iPad stands outside the museum like a super-sized sculpture. (Manufactured by Deutz-Fahr, it was designed by Volkswagen, one of the exhibition’s main sponsors.) Inside the museum, the floor is littered with stickers of images that have sprung from Koolhaas’s ten years of research; the team at OMA’s in-house think tank AMO, led by Samir Bantal, has been on the job for four and a half. There are glow-in-the-dark pigs and wind farm propellers and a replicated Roman sculpture of a fisherman standing in a small pool of water. Above him hovers a drone, ready to spear contaminated pond life, and above that a single hay bale suggests that certain traditional types of farming are simply floating off to heaven. A wall heaving with hundreds of questions—Who thought of free time? Can a condition be urban without people? Why do we avoid death?—clarifies Koolhaas’s role in all this as quiz master rather than the quizzee.

The title of the show, with its reference to the future, is a little misleading since Koolhaas and Co seem very much occupied with how we got here in the first place. Neither are we offered a clear definition of what countryside is. To judge by the show, it includes everything from the Nevada desert to little German villages and lots of China, but none of rural India—though that is a part of the world where rural conditions are so problematic that at times as many as 30 Indians a minute are moving from country to city—or the Brazilian rain forest.

Around the first ring of the rotunda, a stunning undulating canvas covers the entire curving wall. It is like an elegant Aubusson, though in this case not woven but digitally printed with images of ancient Chinese and Romans enjoying the liberation of country living, Marie Antoinette’s faux rural idyll at Le Hameau, 1960s hippies and 21st -century spas, where the notion of green pleasantness has been co-opted as part of that industry’s marketing tools. It was, apparently, the mass acquisition of the Swiss ski resort of Andermatt by the Egyptian developer Samih Sawiris that initially piqued Koolhaas’s interest in countryside issues, as he observed how the outward appearance of village life and regional scenery was being perfectly preserved there, even as the original inhabitants were being priced out of their existences, and the international super rich were sweeping in to acquire their fourth, fifth or eighth home. 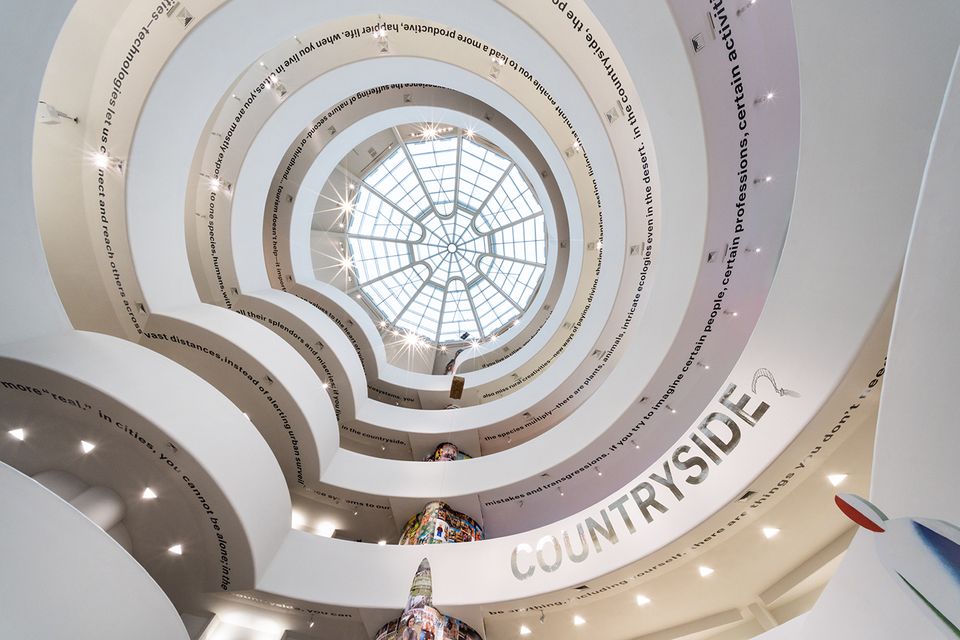 But this exhibition does not stay in the present for long. It wants to explain the monumental land reforms of the 20th century, from the Nazis and their fetishisation of rural purity to Mao’s collective farming. It cannot resist the 18th-century propositions of Charles Fourier, the French philosopher who believed in a system of co-operative communities where people would live in hotel-like buildings and each community would communicate by a system of light houses. (Fourier’s hideous racism—everyone, he said, would be given jobs according to their interests, apart from Jews who would have to work the farms—seems to have been overlooked.) Or Herman Sorgel’s terrifying ideas about draining the Mediterranean and creating a Europe + Africa super-continent. There is a demonstrable love here of systems over humanity.

As anyone who has ever been to an architecture biennale knows, architects are not famous for their editing skills. Their professional tendency is to throw a lot of information on walls, to overwhelm with research. Countryside is no exception—a sprawling beast of a show that occasionally descends into chaos. (The accompanying book is a cute pocket-sized little thing, suggesting that someone has a sense of humour.) But when it adopts a more human angle, it is rather easier to love.

There are charming anecdotal stories of villages in Germany and Italy that have been reactivated by the victims of war and economic deprivation who have poured into Europe from Africa and the Middle East. There is a section on how the Qataris kickstarted a standby farming project the minute a global blockade was put into effect in 2017. (Apparently you will have no problem feeding your citizens if you are set up to import 171,000 cows from Australia at the drop of a hat). There is the fascinating tale of Taobao, the super successful flatpack company started by three men in rural China after a revelatory visit to IKEA; a rather fancy bunk bed, shown here in model form, is its best seller. In Kenya, the liberalisation offered by mobile phones from traditional banking is highlighted, while a new train line there, paid for by the Chinese, is celebrated for connecting the country with the city.

Laudable as it is to come at a big issue from a new and untested angle, climate change really is the elephant in the rotunda, not broached until well over halfway through the show, by which time I fear your average 16-to-30-year-old will be spitting with indignation and rage

But while there is plenty to enjoy, there is a great deal to question. (The Kenyan train line has left the country with a debt it may never be able to pay off and cuts right through a natural park in central Nairobi—possibly the world’s only natural park in a city.) It is all highly partial and, I suppose, personal; a sort of “Rem was here.” We get the impression he is not interested in industrial-scale agriculture, unless it is Dutch and decoratively lit with a brilliant pink light. Laudable as it is to come at a big issue from a new and untested angle, climate change really is the elephant in the rotunda, not broached until well over halfway through the show, by which time I fear your average 16-to-30-year-old will be spitting with indignation and rage. As Australia burns, the UK floods and a plague of locusts tear across East Africa, global warming is dealt with at one remove, with maps of melting permafrost in Siberia. The problem of conservation congestion is covered by a story about over-friendly gorillas. The future, when it finally arrives, is about face-recognition fish farming, and Japanese robotics that enable old people in rural communities to lead better lives.

As he accompanied a group around the show before its public opening, Koolhaas admitted that if he had known more about the non-urban world earlier in his life, he might not have become an architect. It is much too late for him to turn back that particular clock, so perhaps this is his bid for liberation from the shackles of urbanism and building. The show is 98% architecture-free. Why it is on in the Guggenheim, is another question to be asked. It does not appear on that initial wall, though I suspect that Rem, and a handful of sponsors, do know the answer to that one.