The artist Louis Wain (1860-1939) was as eccentric as water is wet. Wain painted and drafted as effortlessly as he struggled with most other things. He could draw a portrait with two hands in less than a minute. His passions were electricity, his wife (once his family’s governess) and cats, his subject of choice.

The Electrical Life of Louis Wain, directed by Will Sharpe, now at the Toronto International Film Festival, begins as Wain’s work was just being recognised, before he put cats at its core and became a star illustrator. This hyper-stylised sad whirl of a film takes us inside Wain’s Victorian family—he provided for five sisters—and through the misfortunes that sent the eccentric artist to insane asylums. His once-charming eccentricity turned out to be schizophrenia, a family affliction. By that time, his cats were out of the bag, and reproduced all over by the popular press, even in a line of ceramics. Depending on where you stand on cat-mania today, Wain can be thanked or blamed for the rise of the feline in popular culture.

Wain’s images of cats should get at least nine more lives with this bio-drama, where Benedict Cumberbatch plays Wain as well-meaning, fitful and mercurial, for whom drawing supports everyone around him—until it doesn’t. We watch as Wain’s ineptitude with money made everything else worse, in this reality check on the dream of a life built on art. Wain’s bond with cats begins when he and his new wife, Emily Richardson (Claire Foy), adopt a kitten they find in the rain, naming it Peter, who would be the artist’s main model long after Emily’s painful death from cancer. 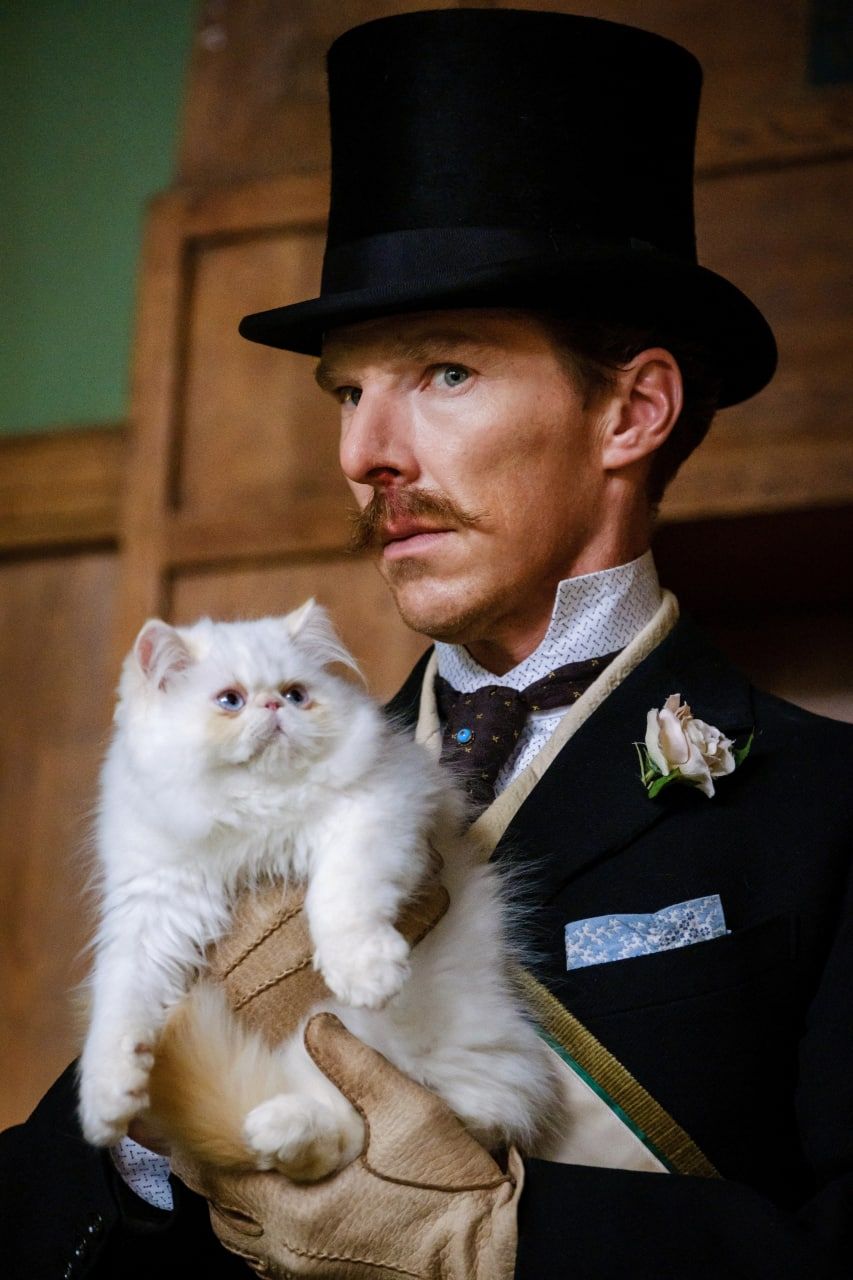 Besides its sentimentality, Louis Wain is pointlessly long on atmosphere, and sometimes confusing. It tugs on references to Vincent van Gogh as Wain toils in asylums, and its grim twist on Mary Poppins in the suffering of his cancer-stricken wife, a former governess, may be too dark for the family movie that it tries to be. Wain’s interstitial faddish ravings about electricity and its powers for good and bad—a craze of the time—feel stuck like pins into the drama.

The art world will sneer at this tragic tale—Louis Wain was not Vincent van Gogh, he’s not even the dog-loving William Wegman. Still, Sharpe’s film (co-written with Simon Stephenson, co-produced by Cumberbatch), which does not aim at the cognoscenti, will not be a commercial catastrophe. For its exhuming of a story that few know today, the costumed saga of the man who anthropomorphised cats on paper will probably be more popular than the ill-fated 2019 flop of the musical CATS!, budgeted at $95m, where human celebrities in feline suits sang and danced. Oddly missing from Sharpe’s film is the fact that Wain joined a project to make an animated film of his cats a century earlier, in 1917. Yet Wain, the sketching whiz, was hopelessly slow at drawing for animation, and a few months later his work was eclipsed by Felix the Cat. The rest is history. 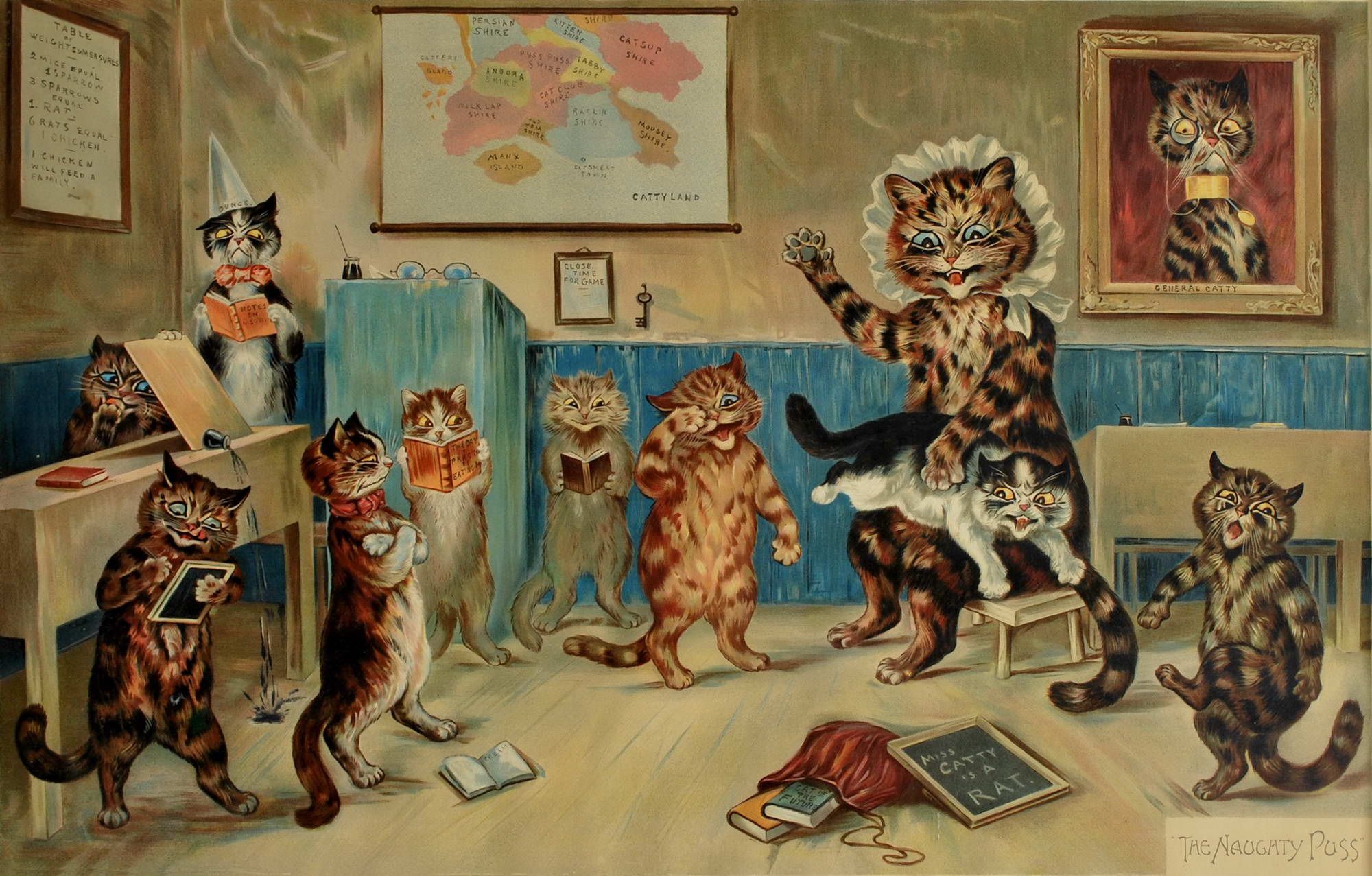 A lithograph based on Louis Wain's painting, The Naughty Puss

Amazon’s marketing heft in selling the film worldwide should not be underestimated. Hello Kitty—the omni-present Japanese cute cat creation—is an inescapable kitsch logo, so audiences should be ready for a movie and piles of merchandise from the Wain cats that might be seen as the brand’s prequel. For the public that does not seek out the felines in The Electrical Life of Louis Wain in cinemas, it will find them on mouse-pads.