How Renoir’s nudes helped the Clark get its groove back

An exhibition sheds refreshing new light on the artist’s development 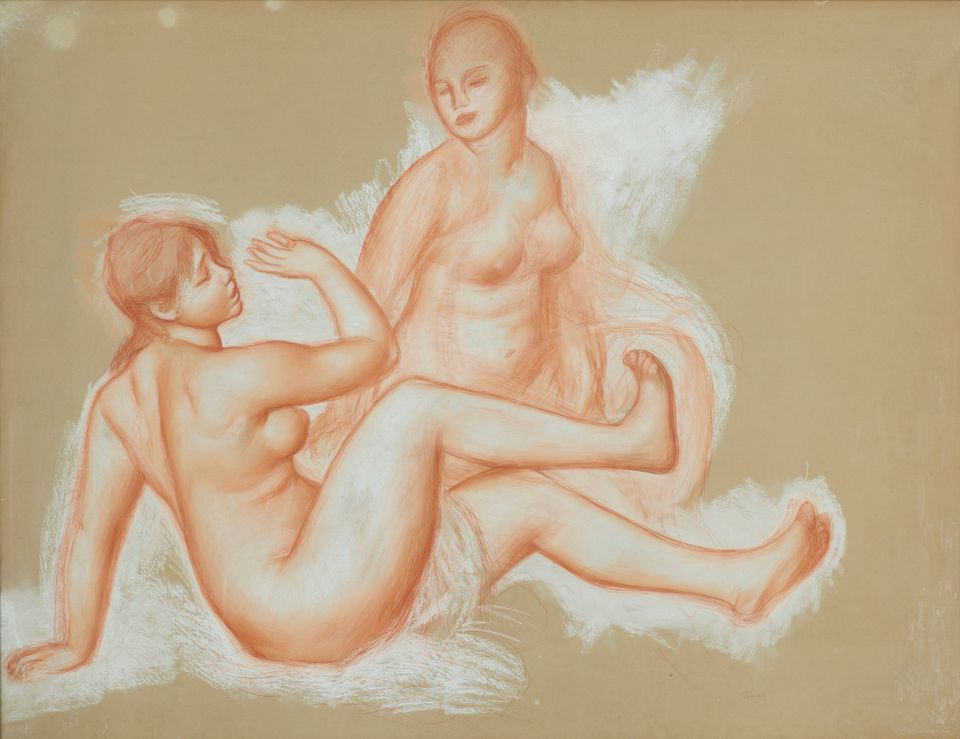 Pierre-Auguste Renoir (1841-1919) is an artist most people either love or hate. Both sides invariably cite the same Renoir totems: his pastel palette, gauzy lines, and unambiguous adoration of women’s bodies. Renoir: The Body, The Senses, the bracing and beautiful new show at the Clark Art Institute in Williamstown, Massachusetts (until 22 September), offers a fresh twist 100 years after the artist’s death. Renoir’s work is more than sweet and pretty; it is both sensual and cerebral and a vital, unconsidered part of the story of Modern art.

The subject of the show is Renoir’s nudes. He did hundreds of them, starting in the 1860s but with intense and adventurous application from the 1880s until he died. Through these nudes— not only paintings but also sculpture, drawings, and pastels—the curators Esther Bell from the Clark and George T.M. Shackelford from the Kimbell Art Museum in Fort Worth have done something amazing: they have found new things to say about an Impressionist.

The show itself is organised in an Impressionistic way, loosely thematic and more often ambling than linear. This works, since great artists do not work in a linear fashion. Works by Rubens, Boucher, Fragonard, Delacroix, Courbet, Corot, Degas and Cézanne bob and weave through the show in attractive, apt juxtapositions that inform Renoir’s development. The conversation stays lively and textured.

As a teenager, during a period of Rococo revival in the French decorative arts, Renoir worked at the Lévy-Frères porcelain factory in Paris, where he embraced a fashion for playful serpentine forms, with more than a soupçon of nudes and cherubs. He also developed a lightness of touch and a sense that heavy narrative was not all it was cracked up to be. His Little Blue Nude (1878-79) is an especially lovely example of Renoir’s roots in what the show calls the decorative tradition. 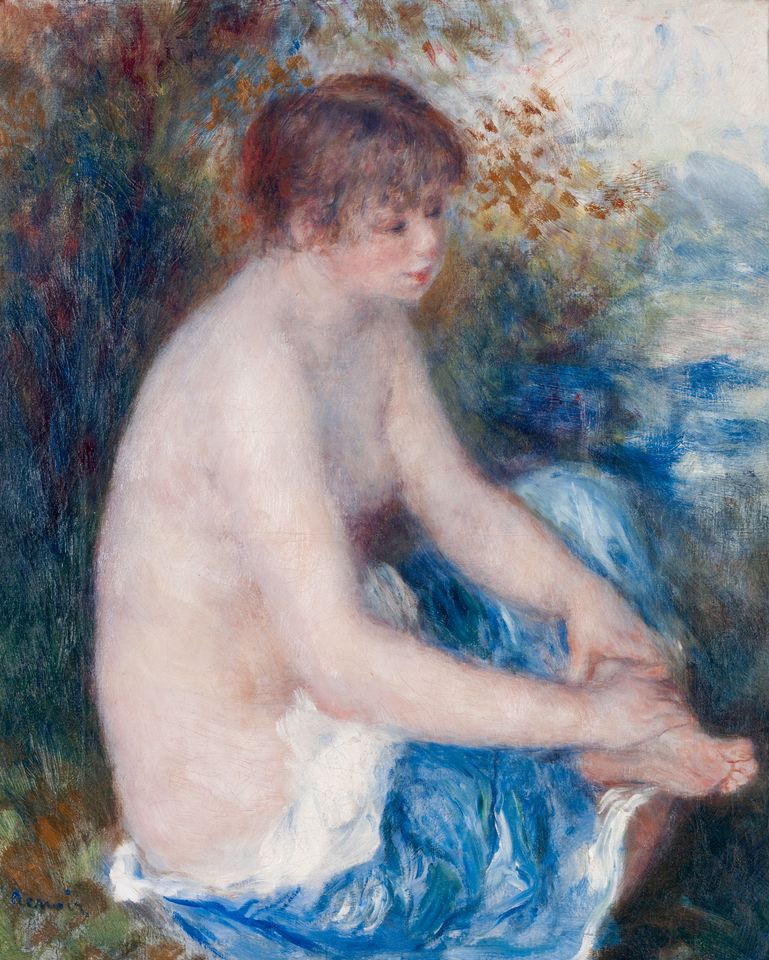 In a superb catalogue essay, Bell, the Clark’s chief curator, puts Renoir’s nudes in the context of Rococo’s rehabilitation, as does the contemporary artist Lisa Yuskavage, who sees Renoir’s time as a porcelain decorator essential for the development of what she calls his "low taste". Yuskavage does not mean this as a swipe, but as recognition of the artist’s feel for pleasure and beauty for their own sake. Renoir's nudes are often faulted for their lack of agency or engagement, which has defined them as objectified. Yuskavage finds them to be self-absorbed: they might give pleasure, but they are also thinking about pleasure, frankly happy in their own world. We as viewers are blithely invited to join them. It is lush, gorgeous escapism, expertly conceived, and there is nothing wrong with that.

Renoir was never stagnant and always a voracious looker, traveller and thinker. Impressionism, for him at least, ran out of steam in the early 1880s, and he did not expect a long visit to Italy in 1881 to move him as much as it did, but he was ready for change. After looking at Raphael especially, Renoir entered a period loosely called Classical Impressionism, where his nudes became more sculptural and weighty and his contours more clearly defined. Two famous nudes in the collection of the Clark, Blonde Bather (1881) and Bather Arranging Her Hair (1885) are among the works showing a transition that happened subtly and over time. One of the show's many revelations are Renoir's drawings from the 1880s, brilliantly presented as a pivot point. They are bold and bracingly economical. Among them is a big drawing, Bathers (Study for The Great Bathers) (1884-87), recently acquired by the Morgan Library & Museum in New York. It establishes Renoir's genius in creating convincing form and structure with minimal lines.

I think visitors will find the biggest surprise in two galleries devoted to Renoir the Modernist. Renoir's large, late paintings of nudes are an acquired taste. Sterling Clark was never bitten by the bug, as much as he considered Renoir the best artist France ever produced. He called Seated Bather (1914) "a great big mushy gelatinous fat woman" in a characteristically pungent diary entry.

I agree with Clark that too many late Renoir nudes, as at the Barnes Collection, make for a dizzying proliferation of flesh, but the selection here is a perfect balance. Over the years, Renoir's nudes grew softer and more liquid. They are formally solid but float like dense, puffy clouds. His paint surfaces became thinner so that each layer is delectably present. These surfaces are less a splurge of colour and impasto and more a medley of paint conveying the smoothness of flesh. The perception of flesh is less tactile. It is a difference between feeling and understanding.

Whistler seems as far from Renoir as any two artists can be, but Renoir's late nudes do seem like tonal studies. For Clark, who owned many pictures of young girls by many artists in many styles and also despised Whistler, these late nudes were not objects of lust but abstract studies in rose, yellow and blue.

My quibbles are few. A giant Renoir chronology tucked in the back needs condensing. Visitors do not see it until halfway in the show, anyway. The final section on the reverence young artists held for Renoir after 1900 is one of the show's great merits. Given this, works on view by Matisse, Bonnard, and Léger are too modest. A clunker by Picasso, Two Reclining Nudes (1968), makes no sense. His debt to Renoir was brilliantly demonstrated in the previous gallery with Picasso’s Nude Combing Her Hair (1906), which showed exactly what inspired the younger artist. 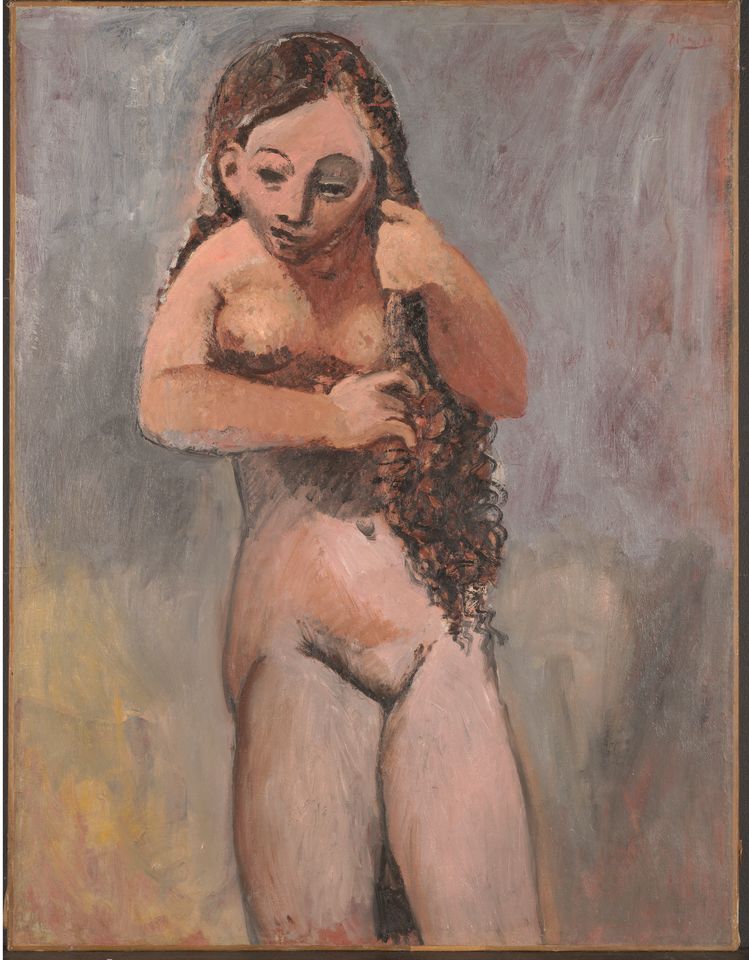 It is possible to make too much of Renoir's role in Picasso's development. The Centre Pompidou's recent show on Cubism demonstrates that by 1915, Picasso had spliced and diced the figure as much as he could while still retaining a recognisable figure. He seemed ready to move on to new things, much as Renoir did in the 1880s. Renoir was one catalyst but the First World War had shattered the avant-garde market in Paris. In my opinion, Picasso's own classicism at this time owed as much to a more conservative thrust in market taste as it did to his exposure to Renoir.

The curators, alas, cannot do anything about the Clark's exhibition space, part of the problematic addition that put the museum $80m in debt. The space is a football field’s distance from the Clark's permanent collection and its unparalleled riches by Renoir from early in his career. Some are in the show but most are not. Temporary exhibition galleries really should be close to the permanent collection. What is the point of a travelling show if it does not fully complement or contextualise the things a museum owns? People looking for a hike have access to ample trails on the Clark's pristine hills. They need not expect a long march indoors to apply the good thinking in the Renoir show to the Clark's much-loved objects.

The Clark's big summer shows have been spotty affairs in the last few years, with so-so treasures shows from other collections and one or two trendy interventions that stumbled if not bombed. For years, the museum was known for shows of exceptional beauty, intelligence and broad accessibility. It was said the Clark bridged the gap between serious scholarship and the public's understanding of art. While it occasionally hit its high mark, that particular set of keys went missing. It took Renoir to get the Clark back into its much adored and esteemed groove.