The Big Review: Howardena Pindell at The Shed in New York

This survey of the 77-year-old artist's work lulls the viewer with colourful abstraction before tackling its real subject: racial violence 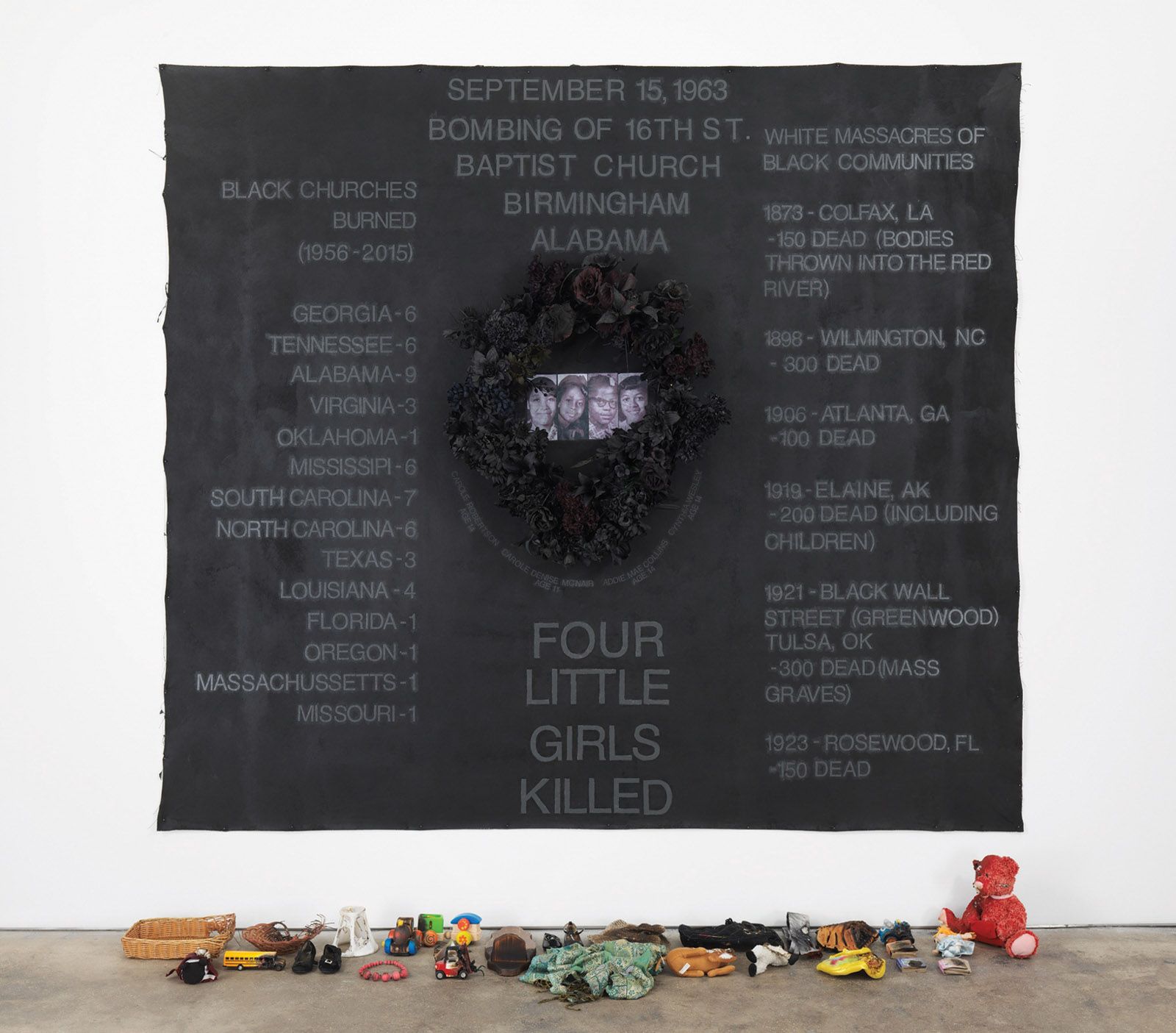 At the heart of Pindell’s new work Four Little Girls are the four children who were killed in the 1963 white supremacist terror bombing of a church Courtesy of the artist, Garth Greenan Gallery and Victoria Miro Gallery

The Shed really ought to hang content-warning signs at the entrance to Howardena Pindell: Rope/Fire/Water. Not to shield the innocent from sexual or violent material but, human behaviour being what it is, to tempt more people into seeing it.

At the moment, pandemic restrictions are limiting capacity as well as programmes that might inject the Shed’s cavernous spaces with living breath. What’s more, this multidisciplinary cultural complex has the bad luck to sit on the outer banks of Manhattan in unfriendly and remote Hudson Yards. And, despite funding from billionaires whose names are a design feature of the currently off-limits lobby, it charges separate admission for each offering. Never mind that. In an election year that has been driving everyone mad, Pindell’s calibration of beauty and horror is practically an humanitarian act, one that whipsaws between a bruising kick to the gut and the healing salve of poetic justice.

Beauty comes first, with fairly decorative abstractions on unstretched canvas that initially read as minimalist splats of pastel colour resembling textiles. But these coquettishly crafted disturbances to the structural integrity of the Modernist grid are all of a piece with far more literal works that rage against bigotry and position art as history’s best defence against erasure.

The earliest canvases date to the 1970s, when Pindell was the first Black woman to hold curatorial positions at the Museum of Modern Art in New York. The floor of its frame shop yielded such materials as punched paper discs that enliven her seemingly smooth surfaces with textural detail. Reminiscent of wall works by Richard Tuttle, they became increasingly ornate over time, their accumulations of colour, thread and specks of glitter lulling viewers into a state of contemplative comfort.

That doesn’t last. A pair of dark, mixed-media works catapults the exhibition into its real subject: racial violence. Four Little Girls refers to the 1963 bombing of a church in Birmingham, Alabama, that was central to the passage of the Civil Rights Act of 1964. Pictures of the murdered girls appear within a black wreath, between columns of text listing other desecrated Black churches and the death tolls in massacred, early 20th-century communities. Charred objects—toys, shoes, clothes—lie on the floor below the unframed canvas, like relics discarded in a gutter.

Columbus, a companion piece, describes crimes of imperial hegemony, specifically the cutting off of Black labourers’ hands in what used to be the Belgian Congo. An arrangement of black mannequin hands below the blackboard-like canvas suggests campfire kindling. Oof. 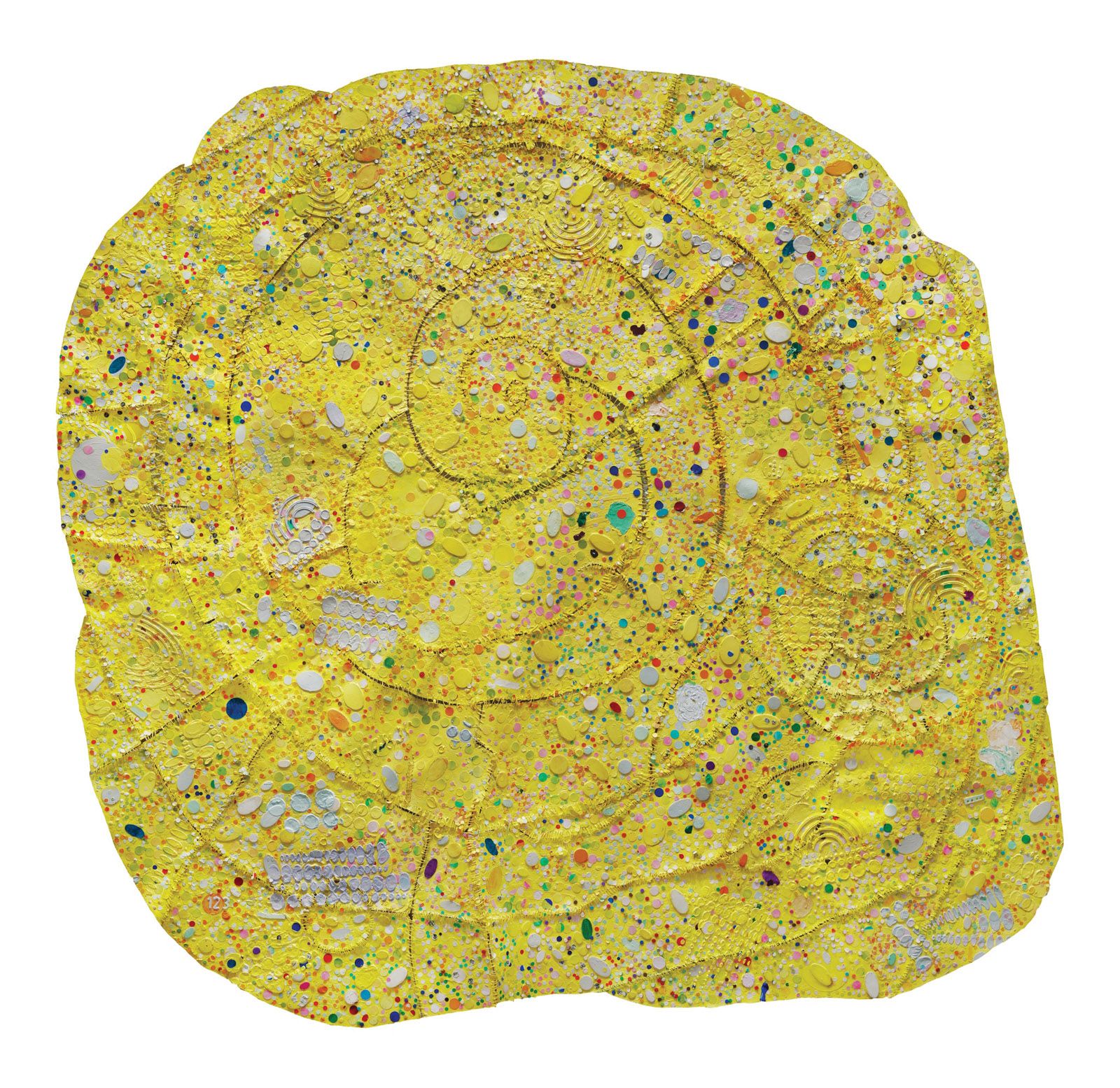 These two works lead dramatically up a ramp to the screening room housing the show’s title work, a shattering, 16-minute video delineating the history of lynching in America. Its emotionally charged content aside, what gives the video its raw power is what is absent from the preceding installation, the artist’s restraint.

Rope/Fire/Water proceeds with great economy of means, to trace white America’s enforced demoralisation of its Black population from the 17th-century slave trade to recent acts of police violence. Pindell’s recitation of fact doesn’t need finger-wagging commentary, and she doesn’t give it. She also withholds all but a few images, generally news photos of heinous acts. In greater number, they would be numbing. The point is to feel—and does that ever happen. Just listening is painful. And enlightening. And real.

Most of the time, the screen remains black. Over the steady ticking of a metronome, we hear Pindell turn the pages of contemporaneous accounts of atrocities that she reads with a quiet dispassion, which, by contrast, makes it all worse.

Often, a lynching involved a whole town, not just its chapter of the KKK. Victims were male and female, including a pregnant woman whose foetus did not escape mutilation. We hear about Emmett Till and Medgar Evers in more agonising depth than mainstream news outlets usually permit. Simply hanging people from trees was never enough to satisfy the various mobs; after flaying, burning, tarring, castrating and dismembering their victims, they sold body parts as trophies.

The persecution of minorities may stretch back to the Egyptians and Romans of antiquity, but the tradition of attaching value to skin colour continues to rule power structures today, as Pindell’s video attests in a long scroll naming those who have died at the hands of police since 2015. And it’s not over. Always in Season, the documentary film by Jacqueline Olive that aired earlier this year on the PBS television network, shows just how current a practice lynching still is. And an eyebrow-raising graphic in Pindell’s video compares a century of lynching in states all across the country, not just in the south.

This deeply researched video is every bit as upsetting as films of concentration camps where Nazis exterminated six million Jews in the name of racial purity. As Isabel Wilkerson confirms in her book, Caste: The Origins of Our Discontents, Jim Crow segregation laws were inspirational texts to the Nazis, while Hitler particularly admired the American “custom” of lynching. Racial entitlement as we know it is a white power construct, one that even liberally minded people have absorbed as if it were the natural order. 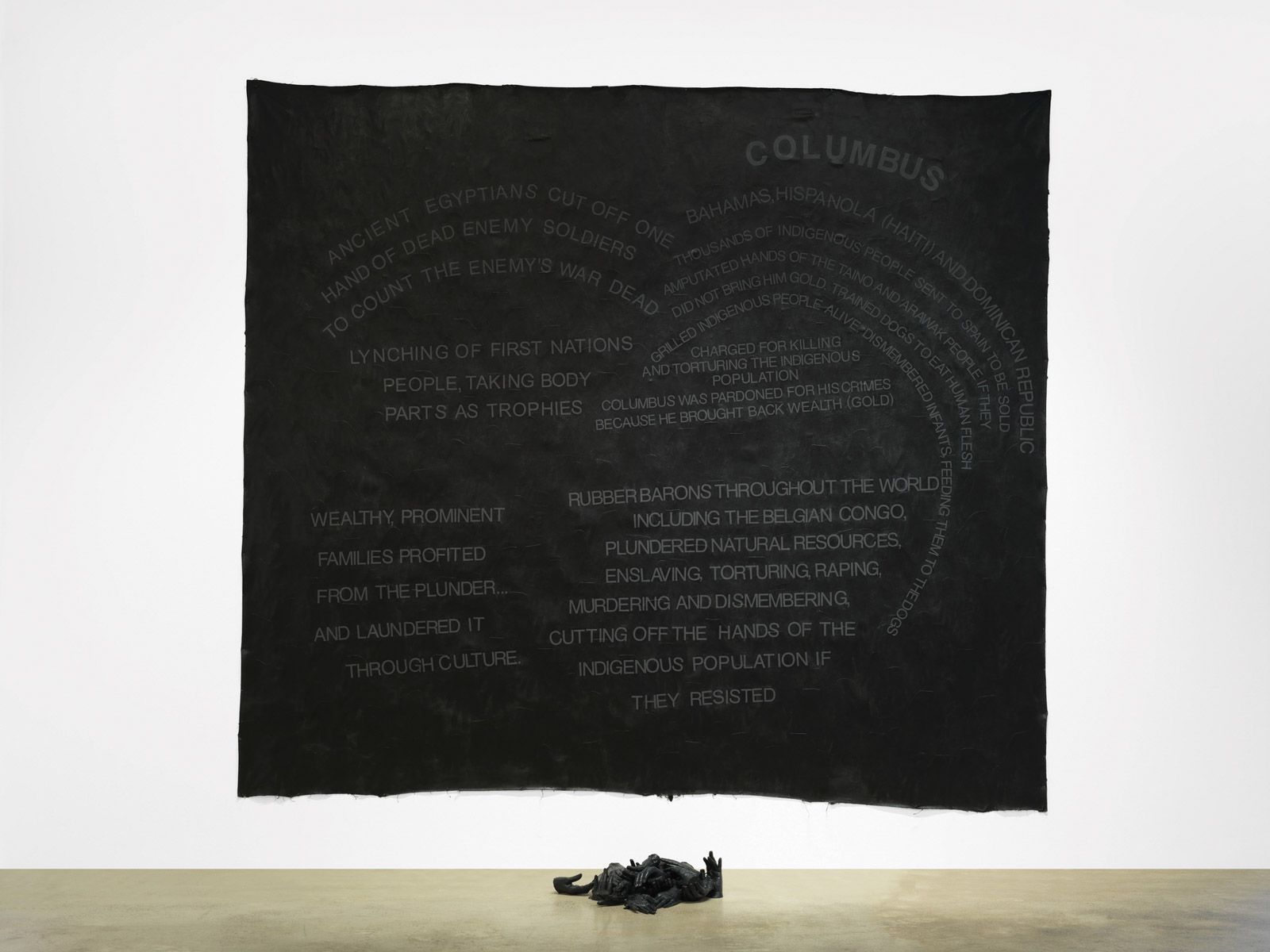 Columbus (2020) references colonial violence against Black people, specifically the cutting off of Black labourers’ hands in what was the Belgian Congo Courtesy of the artist, Garth Greenan Gallery and Victoria Miro Gallery

That is the subject of Free, White and 21, the first video Pindell ever made, in 1980. It’s not in her show but can be streamed on UbuWeb. It personalises what Rope/Fire/Water historicises. Speaking to an uncomprehending alter ego in whiteface that she also plays, the young Pindell revisits the casual, mean-girl humiliations she experienced in social settings, the loss of jobs to less accomplished whites in professional situations, and her minority status at elite schools, starting in kindergarten, where she was tied to a cot for asking to be taken to a bathroom. This intolerance later extended to the supposedly open-minded art world, where white feminist colleagues shrugged at her tales of discrimination.

The proof is in the pudding: Rope/Fire/Water is the 77-year-old Pindell’s first institutional survey in New York in more than 25 years, following a touring retrospective in 2018-19 organised by the Museum of Contemporary Art in Chicago. I saw the Shed's show on the day that Joe Biden became president-elect, with all of New York dancing in the streets. Finally, I thought, on my exit, for the first time since Bobby Kennedy’s tragically short run for the White House in 1968, a white man in a position of power has committed to taking institutionalised racism by the shoulders and shaking it.

A sign outside the screening room invites troubled viewers to seek out designated staff for discussion. I didn’t see any. I asked two of the guards, all of whom were Black, if they’d seen the video. They hadn’t.

I’m saying, go. It may be hard, but so what? Truth hurts. It doesn’t kill. Pindell’s work comes across less as a moralising cudgel than a welcome counterweight to an era of disinformation. She quotes Martin Luther King’s Letter from Birmingham Jail: “Injustice anywhere is a threat to justice everywhere.”

So is ignorance. Trust art to make us smart.