After a few false starts, the exhibition's 11th edition is finally fully open—and its reckoning with colonial violence has never been more crucial 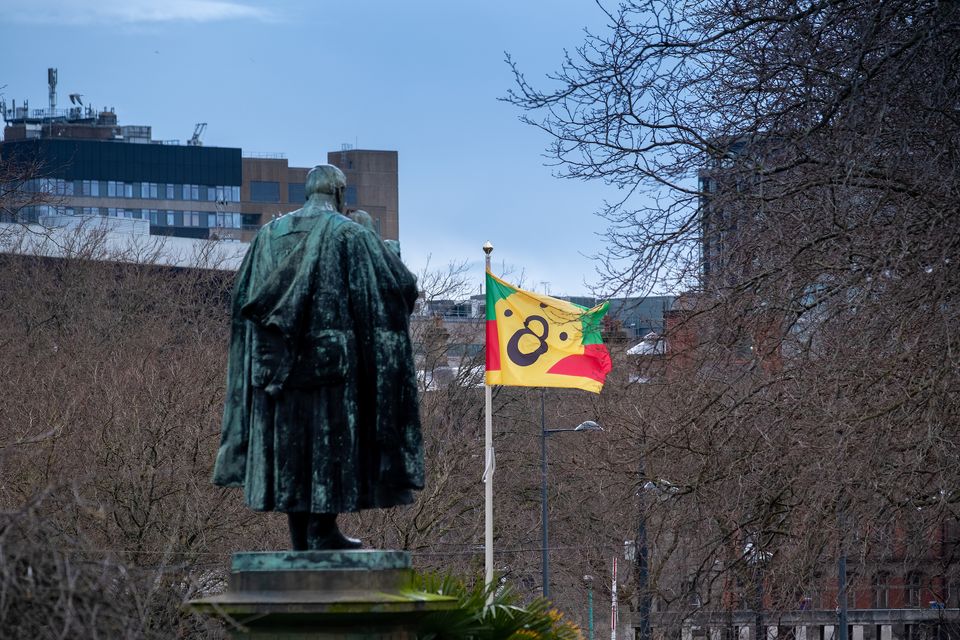 After a few false starts, the Liverpool Biennial is finally fully open for its 11th edition, under the umbrella title of The Stomach and the Port. Covid-19 put paid to the original dates of July-October 2020, and then the nationwide shuttering of publicly funded museums and galleries meant that only the outdoors projects could be unveiled on a revised opening date in March. But while the surrounding circumstances may have radically changed, the events of the last year mean that the biennial’s central themes are more relevant than ever.

Its title is a direct reference to Liverpool’s historic role as a global trade centre that generated vast profits from human trade. This pertains to both the forced movement of enslaved people as well as the products created from forced labour, most notably cotton and sugar.

The port of Liverpool lies at the heart of this biennial, with many sites and projects grappling with its terrible past and legacy. From Rashid Johnson’s stacked pair of Black heads cast in bronze, presiding over Canning Dock quayside, to Larry Achiampong’s series of pan-African flags fluttering from the bombastic 18th and 19th century public buildings across the city and Xaviera Simmons’s lists of American slave holders and Jim Crow era segregation regulations installed in the derelict underground chambers of Liverpool’s Cotton Exchange; in myriad ways this biennial ensures that the very fabric of this city is reframed and recontextualised. 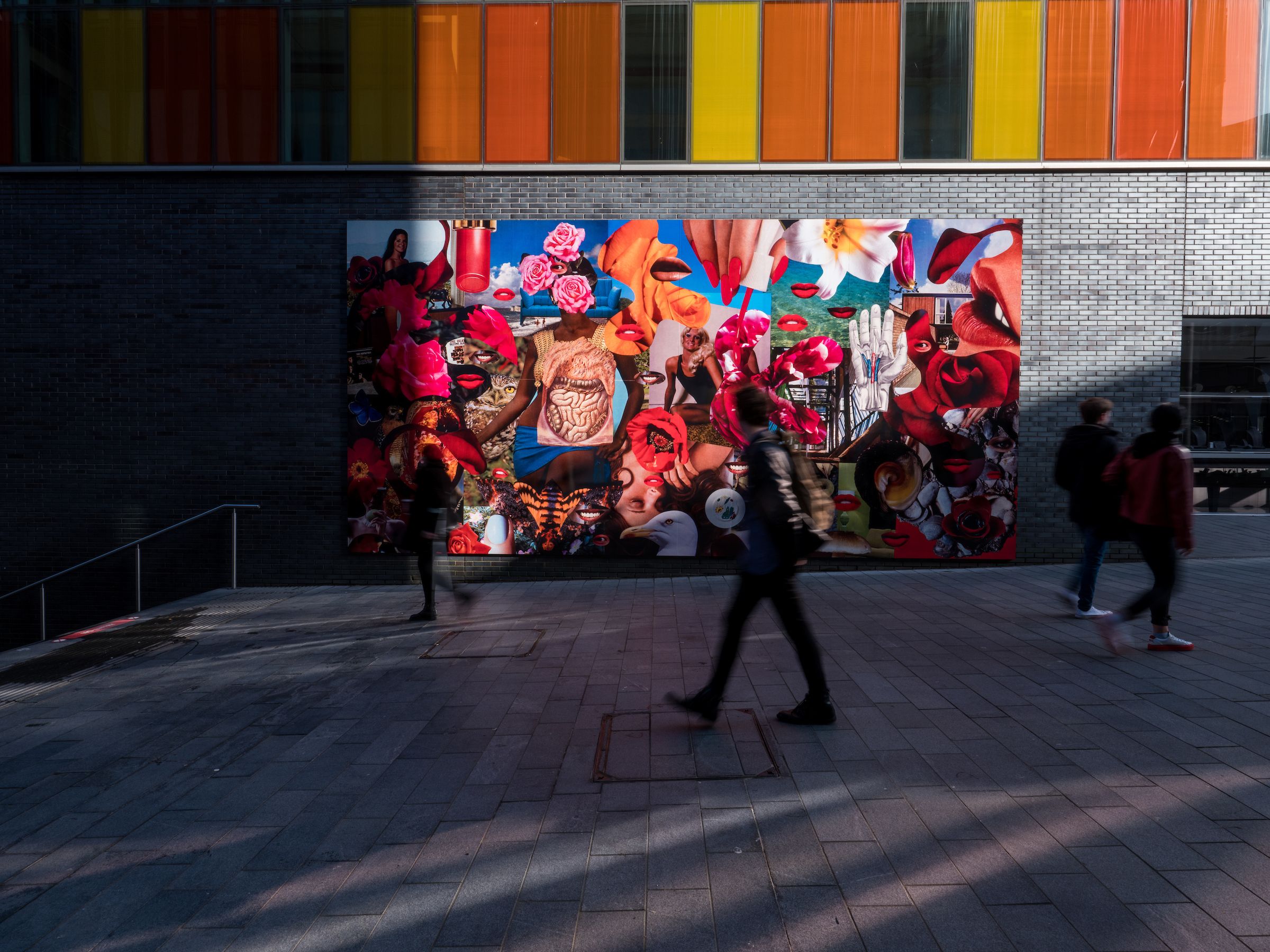 Echoing through the cavernous, derelict former home of Lewis’ department store, Lamin Fofana’s sound and light installation, inspired by the infamous 18th-century murder of the human cargo of the slave ship Zong, haunts this former symbol of Liverpool’s wealth. And Linder’s opulent collaged Bower of Bliss billboard animates the blandness of the Liverpool One Shopping Centre with a visual overload of lips, body parts, flora and fauna that serves as a reminder of the city’s abundance of commodified goods.

The biennial's curator Manuela Moscoso further extends its scope by drawing analogies between the port and the human body, hence the reference to the stomach. Each is viewed as a place of connection and exchange, both shaping and being shaped by its environment. Bodily references abound, with a particular emphasis on reclaiming bodies that have been overlooked, exploited and marginalised. Corporeal explorations range from Jadé Fadojutimi’s wonderfully exuberant paintings of bodies and nature in physical and emotional flux at Bluecoat, to Camille Henrot’s brilliant painterly and sculptural explorations of lactating motherhood in the Lewis Building and a range of work in Tate Liverpool that directly challenges white male heterosexuality. Among these are the suggestive symbolism of British Occultist-Surrealist Ithell Colquhoun, the feminist paintings of Judy Chicago and the up-to-the-minute contemporary gestures and phrases filmed by Martine Syms.

The pandemic and the upsurge in protests around Black Lives Matter have made us all too aware of the permeability and contingency of our own bodies and how we are all interconnected, not only to each other but to vast networks of cultural, natural and political systems that we ignore at our peril. Add to this the ongoing attempts of the British Government to prevent museums and cultural organisations from reckoning with the colonial violence embedded in their collections, and it is all too evident that the histories and legacies exposed in this biennial have never been more crucial. 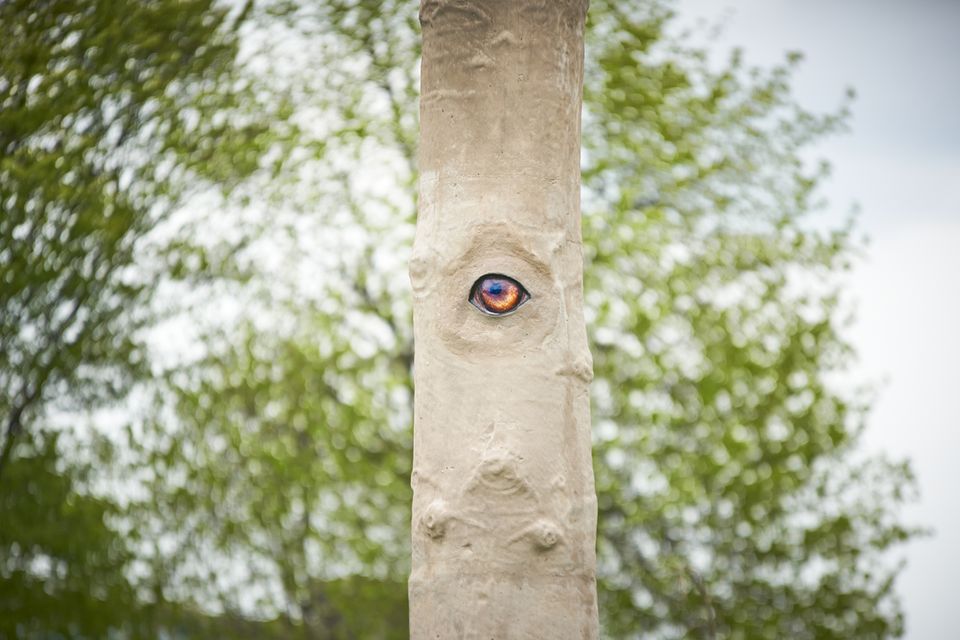 In the centre of Crown Park in Toxteth, a concrete replica of a Pau Rei tree, native to Brazil, has been planted, ringed by a glade of living black beeches. Embedded high on its trunk is a giant golden eye which is copied from that of Bangladeshi pariah dog. When first installed, this uncanny arresting hybrid, commissioned specifically for the biennial, provoked animated debate from local gang members who, once reassured that the eye did not contain a hidden facial recognition camera, have now embraced it as a local artwork. The Spanish-born, Rio-based Steegmann Mangrané also has a film at Bluecoat featuring the stray dogs that live in the Dhaka Art School, further extending his enquiry into the co-existence of nature and culture. 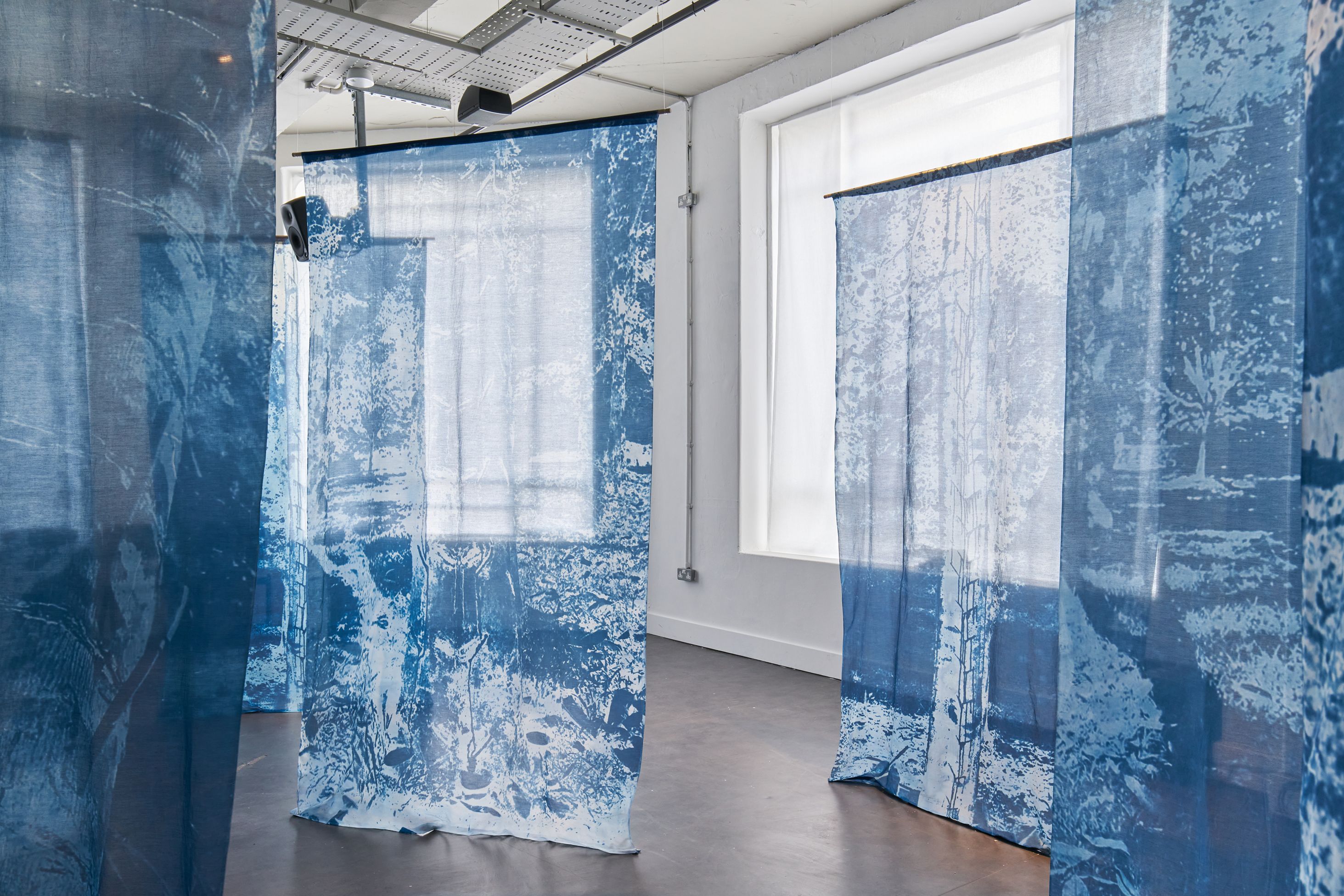 Ayesha Hameed, I sing of the Sea, I am mermaid of the trees (2021), Lush building

This richly evocative multichannel sound and textile installation follows the laying down of the first underseas telegraphic cable between Britain and India in 19th century, creating a communications infrastructure that consolidated imperial power. The thousands of miles of cable were insulated by the rubbery sap of the gutta percha tree, indigenous to Malaysia but soon planted across the empire. Hameed’s soundscape is accompanied by a maze of cobalt textile banners printed with the scored trunks of these trees. They form both a forest and a watery engulfing environment that highlights the consequences of colonial occupation on both bodies and environments. 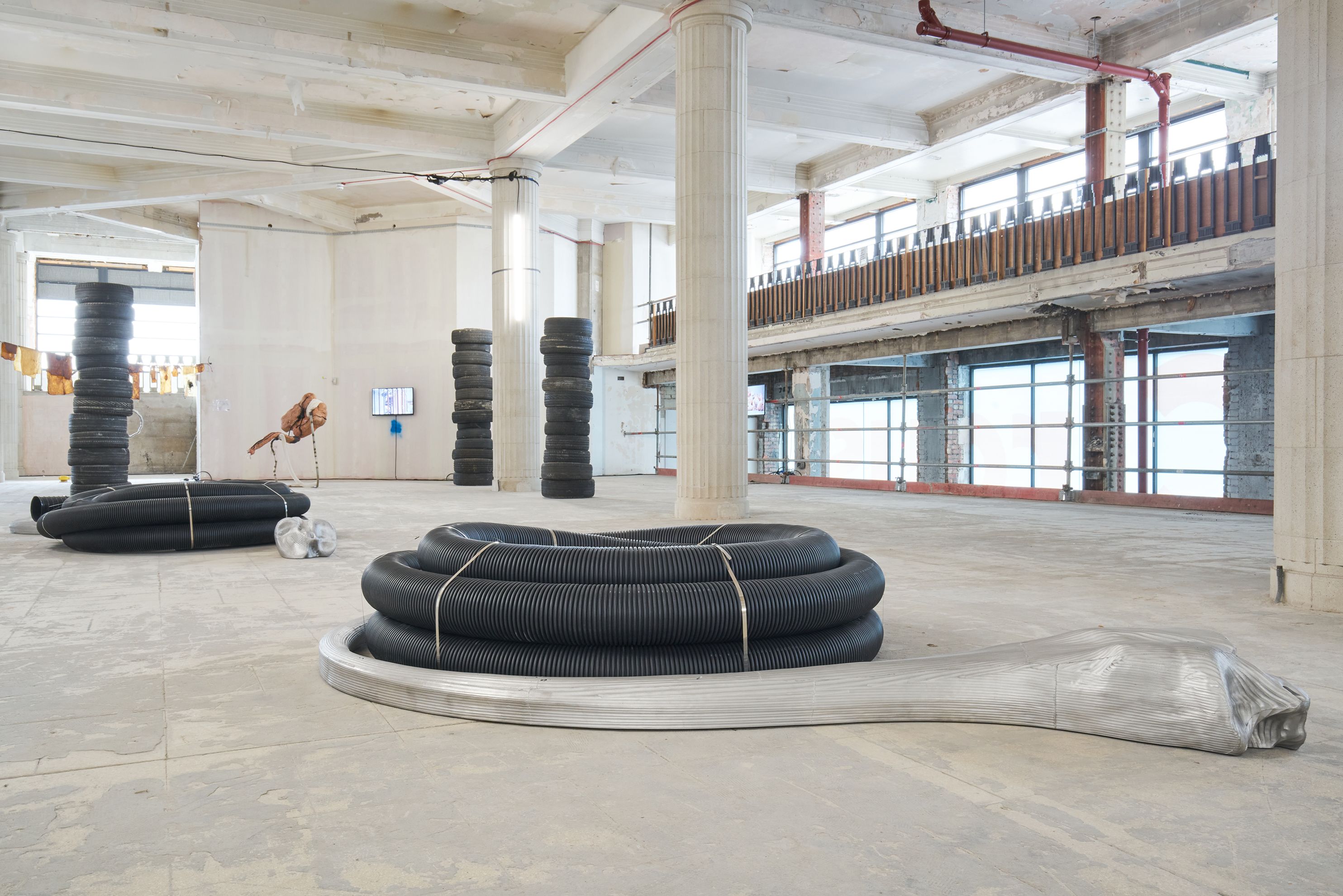 Radically different timeframes and processes, both natural and mechanical, collapse and merge in new sculptures by Alice Channer. Images of geologically folded rock are printed into the surfaces of industrially pleated silk, and infrastructures both organic and manmade are suggested in the coiled forms of heavy duty plastic cable covers. These are in turn echoed in whorls of fossilised ammonites and then combined with giant scaled-up human bones cast in aluminium. An accompanying audio work further excavates these layers of association, combining the sounds of shallow waters, rockpools, motorways and voices both human and non-human. 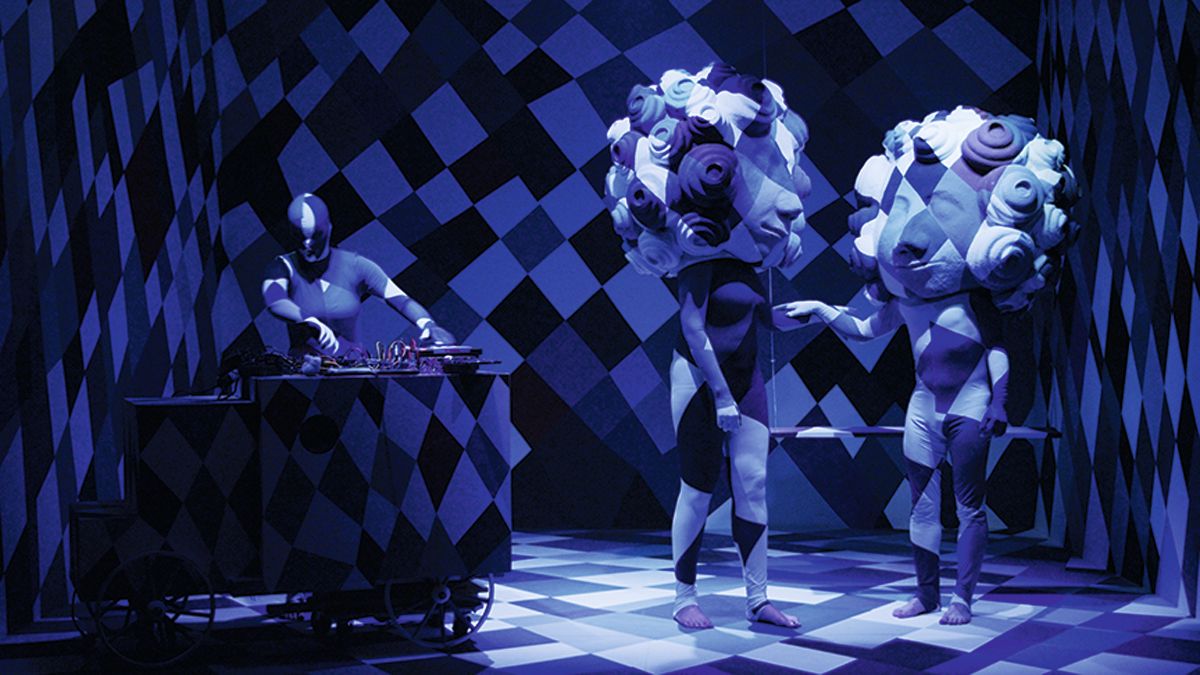 Vienna-based Doujak and London-based Barker have collaborated since 2010 and this film, specially commissioned for the biennial, mashes up traditions of European modernist performance with South American carnival. The result is a riff on cultural cross-fertilisation and the legacies—good, bad and very ugly—of global labour and trade. Dance and music are here channelled as tools of both rebellion and celebration, reminding that carnival was traditionally a time when social orders and repressive regimes could be turned upside down. 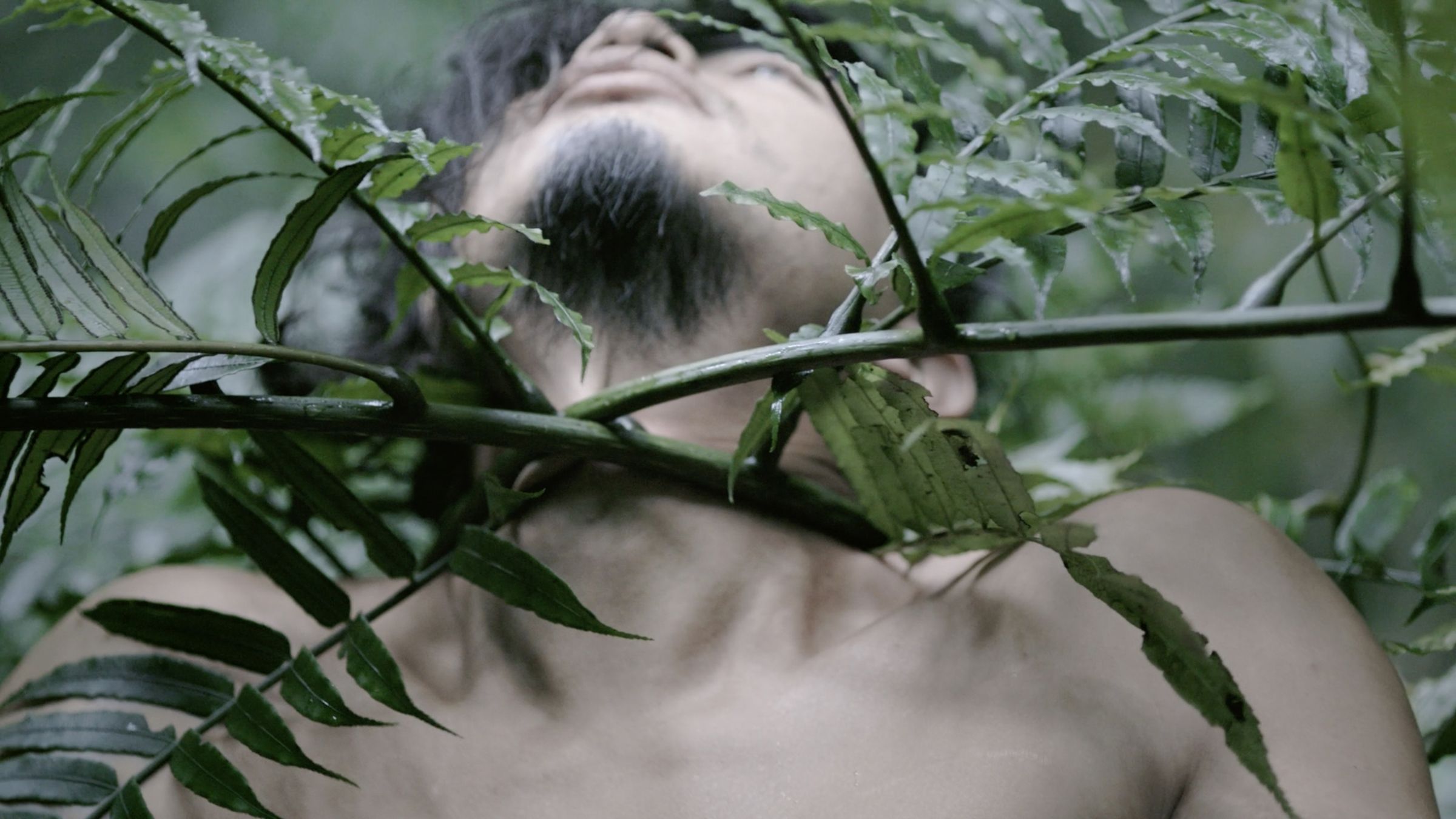 This new commission is the fifth in the Chinese artist’s ongoing film series which very literally – and lovingly - connects plants and people. Exquisitely filmed amorous encounters between young men and the abundant ferny foliage of a Taiwanese forest push the boundaries of sexuality and love to incorporate the natural world in what Zheng describes as “queer ecology.” These leafy interspecies unions destabilise identity and gender categories to remind us that we are not separate from, but an intrinsic part of nature.

Liverpool Biennial: The Stomach and the Port, until 27 June 2021