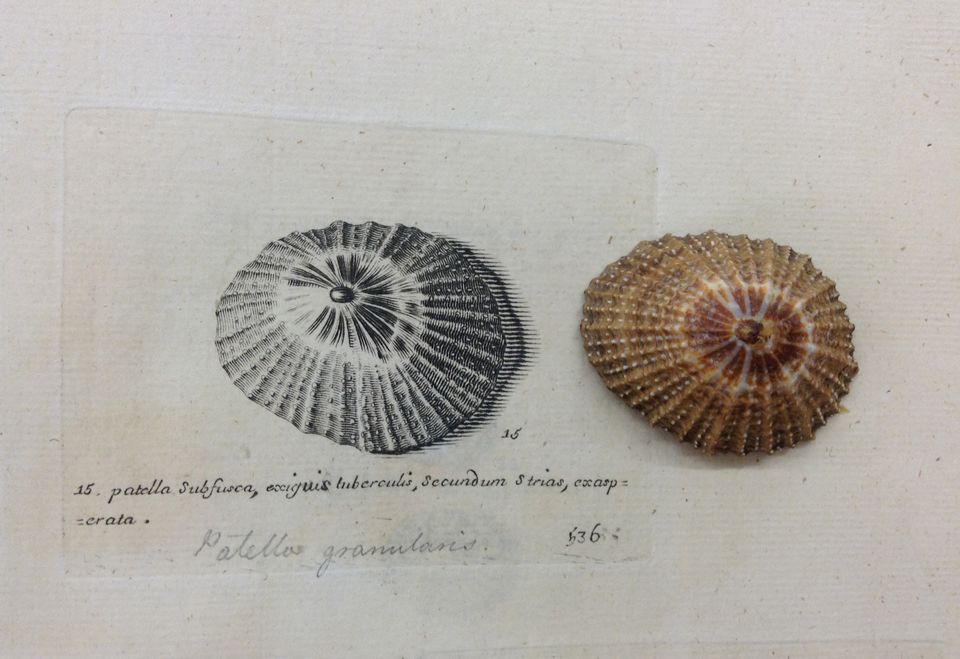 A Lister engraving (on the left) adjacent to a contemporary photograph of the limpet Patella granularis, a species of sea snail  Courtesy of Bodleian Library

Martin Lister (1639-1712) was an English naturalist and physician, and Anna Marie Roos is a scholar of his life and work. Martin Lister and His Remarkable Daughters: the Art of Science in the Seventeenth Century is intended for the general reader and “dedicated to a more detailed analysis of the works of his daughters Susanna and Anna Lister”. Even so, the volume is rather dominated by its first chapter, a “significantly shortened version of [her earlier] biography” of Martin Lister, which, with the opening introduction, extends to just over half the pages of text. There is, therefore, quite a lot about Lister before Susanna and Anna get much of a look-in.

Nevertheless, it is a very interesting story. Born in Radclive, Buckinghamshire, he was educated at the grammar school in Melton Mowbray, and then St John’s College, Cambridge. He moved in 1663 to Montpellier to further his medical education. By modern standards, this was all perhaps achieved in a rather haphazard manner. In Cambridge the intellectual atmosphere had been much influenced by the English Civil War; medicine (“physic”) was a safer bet for a career than the humanities. Lister did well enough, having the right connections and Royalist credentials to be given a “fellowship in physic” in August 1660. In Montpellier, as a foreigner and a Protestant, he was not allowed to enrol formally, but as a member of a foreign students’ academy he “could observe what was taking place in studies in medicine and natural philosophy at the University”. He also did lots of natural history, collaborating with the English naturalists John Ray and Francis Willughby. The Montpellier sojourn abruptly ended in February 1666 when Louis XIV ordered Englishmen out of France, a result of the Second Anglo-Dutch War (1665-67).

Lister worried that any perception of an eccentric devotion to molluscs and might not be good for his medical practice, and the provision of beautiful illustrations might help bolster his respectability

Back in Cambridge, his collaboration with Ray continued, not only in fieldwork and collecting but in thought as well, both Lister and Ray having doubts about “spontaneous generation” (the notion that life could and did arise from inanimate matter). Simultaneously, he tired of his fellowship as he wanted to marry. Family connections, perhaps, had introduced him to Hannah Parkinson of Carleton-in-Craven, Yorkshire. They married in 1669 and settled in York for Lister to establish a medical practice. In the same year he published his first scientific paper, in the Philosophical Transactions of the Royal Society of London, on both the direction of coiling of snail shells (chirality) and the “darting” (airborne migration on a silk thread) of spiders. It includes the wonderful injunction to observe: they make mistakes “who consult not the Stores of Nature, but their own phancy”. It is this that unites two rather disparate sections of the paper: both snail chirality and spider migration had been the subject of fancy, in Lister’s view.

To be of use, observations must be recorded and communicated. For Lister, the context for this was the “York Virtuosi”, the Royal Society and the international Republic of Letters. Lister also recognised and practised “visual, not just verbal, epistemology”—in other words, he used drawings. Tiring of the patchy reliability of the best professional engravers, he enlisted his daughters Susanna (1670-1738) and Anna (1671-1700) as illustrators. They learned from him how to represent objects of natural history as preliminary drawings, and finally as engraved or etched copper plates. Considerable effort and dedication were required, and this daunting discipline was impressed on the girls in their teens. Lister himself apparently closely supervised the execution of the drawings. For him, a further motive for the provision of illustrations besides communication was the establishment of a credible framework for his natural history. He worried that any perception of an eccentric devotion to the habits and forms of molluscs and such animals might not be good for his medical practice, and the provision of beautiful illustrations might help bolster his respectability.

Roos cites the modern criticism of the Lister sisters’ work of the ornate borders within which the engravings were generally placed, and the lack of any scale to indicate size. Here it is interesting to note the comment of the doyen of invertebrate authorities, the late Libbie Hyman, author of six volumes of invertebrate morphology. In her magisterial (though uncompleted) study of backbone-less animals, Hyman wrote in the preface to volume four (1955): “To the comment that enlargement is not indicated in my illustrations I reply that this seems to me of no consequence; the point is to make the drawing large enough to show the required details clearly”. This the Lister sisters certainly did in sets of beautiful and informative illustrations, used to great effect by Roos in the present volume.

• John Grahame has worked at the University of the West Indies (Jamaica) and the University of Leeds, lecturing and researching in zoology. His current interests lie in quantifying shell variation and offering functional explanations for different shell shapes. He is a visiting research fellow in Leeds and the president of the Malacological Society of London