Rembrandt-Velázquez: a match made in curatorial heaven 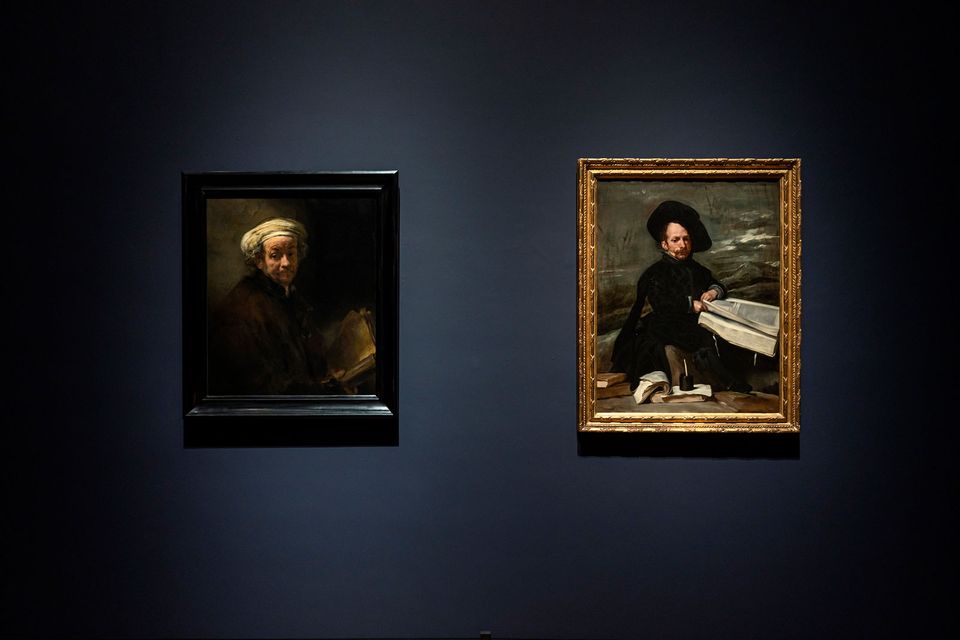 The first painting you see in Rembrandt-Velázquez at the Rijksmuseum in Amsterdam is by the Dutchman, and it is astonishing. The Standard-Bearer (1636)—only sent to Amsterdam from France thanks to a last-minute export licence—meets you in the eye. He is in three-quarter profile, his right arm proudly resting on his hip, almost looming out of the frame, his left hand clasping the pole for the flag that drapes over his shoulder and falls behind him. There, it catches the bright light coming from his right, which otherwise falls only on his right shoulder, his cupped hand against his luxurious costume, the hilt and scabbard of his sword and part of his face (which resembles Rembrandt’s own). The dramatic light allows for virtuosic passages of painting, like the thick yellow impasto on the shoulder of his protruding arm, raw and abstract up close yet, at greater distance, coalescing to perfectly capture the ripple and sheen of fabric.

But The Standard-Bearer is an anomaly in this show of the Dutch and Spanish schools of the 17th century in that he is alone. Every other Dutch picture, whether history painting, portrait or still life, is accompanied by a Spanish pendant. And yet, The Standard-Bearer is an apt introduction: emblematic of the great 17th-century painting that we encounter repeatedly—almost overwhelmingly—throughout, but also setting the historical context. Because the two nations were in conflict for most of the period being celebrated: the 80 Years War, in which the Protestant Dutch Republic battled for independence from the Catholic Kingdom of Spain, continued until 1648—for three-quarters of Velázquez’s life (1599-1660) and two-thirds of Rembrandt’s (1606-1669). Standard-bearers were seen as courageous heroes, leading the troops into battle and thus at the greatest risk of death. They had to be bachelors, so that they would not leave widows and bereaved children. The figure’s precarious existence is there in Rembrandt’s painting: for all his finery, his pomp, his pride, look into his eyes and you see vulnerability and weariness. And in this, too, it is a symbolic picture: a vivid realism—much of it clearly indebted to Caravaggio, the show’s absent presence—is the unifying quality of the art of these warring nations. 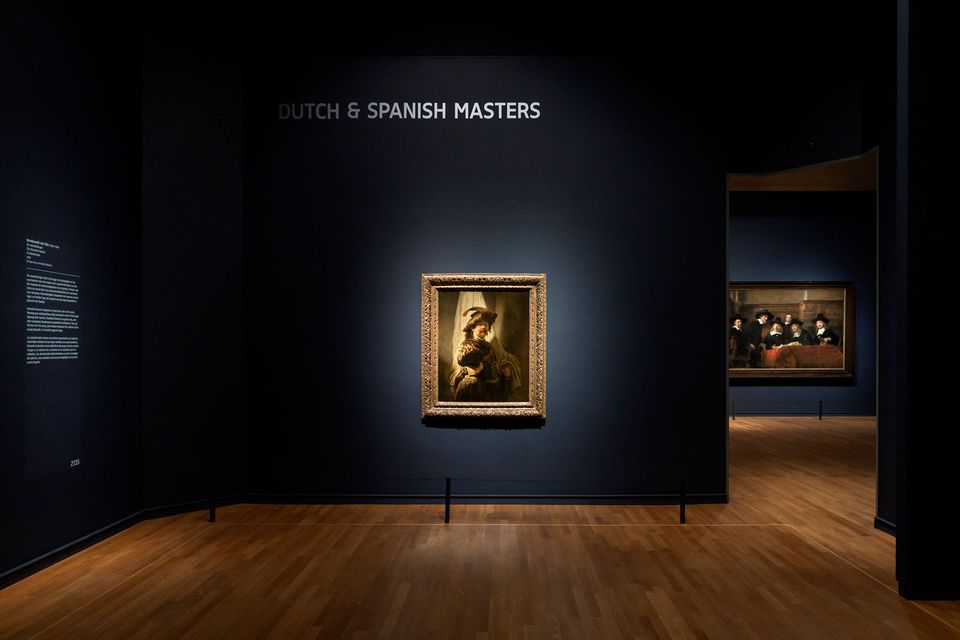 This is immediately evident in the first, transcendent pairing across the room from The Standard-Bearer, of Francisco de Zurbarán’s Agnus Dei (1635-40) and Pieter Jansz Saenredam’s Interior of the Sint Odulphuskerk in Amsterdam (1649). At first they could not appear more different: Zurburán’s symbolic evocation of Christ as a lamb, on a grey platform against a black background, its legs bound and Saenredam’s austere architectonic church interior, with a distant congregation. The Spaniard fulfils the Catholic desire for icons and images to be venerated; the Dutchman’s painting is about the Word of God being delivered from the pulpit. Zurbarán’s painting is all softness, in the beautifully depicted fleece of the lamb, while in Saenredam’s you can almost hear the echoes of the sermon against the hard walls and columns. And yet, stay with the pairing for a while, and similarities emerge, both formally—in the grey platforms on which each painting is grounded, in the palette of ochre, white and black in both pictures—and in the deep emotional conviction they share—the sombre resonance of faith.

This is a show that rewards close, slow looking. The pairings each have a theme, but the curator Gregor Weber has deliberately put texts at a distance from the paintings, so that our visual engagement precedes the curatorial framing. This is astute, especially because in the texts, the themes, ranging from formal devices like light and “close observation” to those based on content, like humour and love, can seem flip—though many are embellished effectively in the catalogue. In any case, the visual correspondences are often so powerful that one barely needs more than the work’s titles. 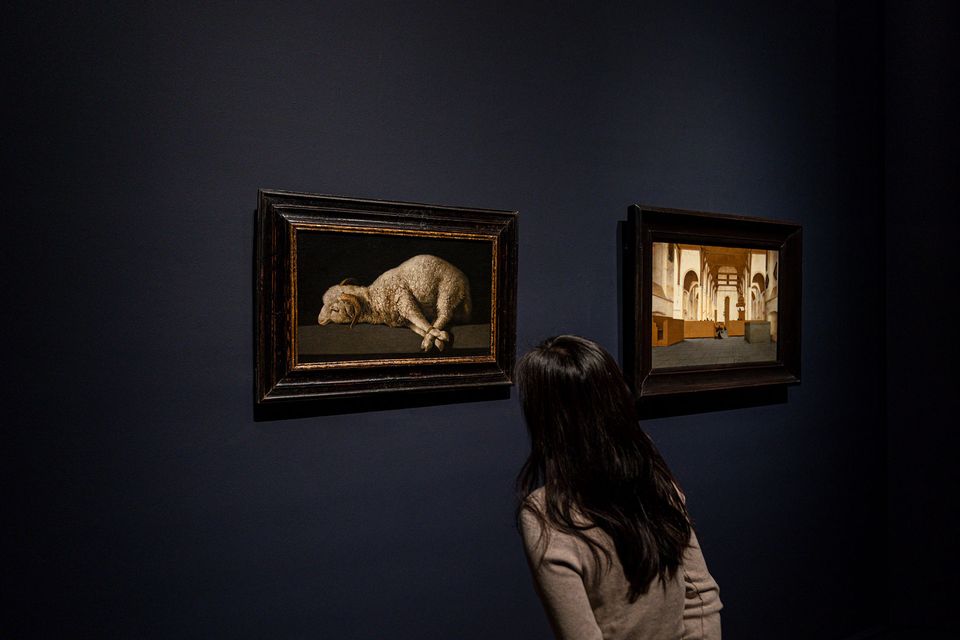 Take the juxtaposition of Zurbarán’s St Serapion (1628) with Jan Asselijn’s The Threatened Swan (1650). In essence, this should not work: the image of an exhausted martyred saint, bound to a tree with ropes, his head collapsed onto his shoulder, next to a swan reacting defensively to a dog whose head is emerging from the water beneath it, its wings and head echoing the crucified pose of its Spanish companion. The contrasting moods—the serenity that makes the Zurbarán one of his greatest pictures, and the violence of Asselijn’s painting— amplify the power of both pictures. That the swan came to symbolise the political martyrdom of Johan de Witt, and that in defending its young it expresses the surrender inherent in the image of St Serapion, as the text suggests, is rather moot.

Other pairings are more conventional but no less powerful: a group of still lives with hanging objects by Juan Sanchez Cotán, Felipe Ramirez and Melchior d’Hondecoeter; a superb gathering of bodegóns (kitchen scenes) by the Master of the Amsterdam Bodegón and Velázquez with Nicholaes Maes’s The Prayer Without End (around 1656). Rembrandt’s touching portrayal of his son Titus as a Franciscan monk is a Catholic picture, showing how artists escaped the religious strictures of their environment. Here it is hung in glorious communion with Bartolomé Esteban Murillo’s Ecce Homo (1660-70), by far the best of Murillo’s pictures in the show, revealing that he, too, could escape sentimentality and achieve a moving realism. Both paintings show their subjects with their heads bowed, in serene contemplation. Notably, there is only one Madonna and Child by Murillo in the exhibition, and none of his many Immaculate Conceptions, which would have highlighted one of the huge gulfs between Dutch and Spanish painting of this era.

Many cameos are played by lesser artists: Adriaen Coorte’s Still Life with Asparagus (1697) is a luminous companion to Zurbarán’s famous A Cup of Water and a Rose (1630), for instance. But inevitably, the exhibition’s big moments are those where the major artists match up. An uplifting highlight is the combination of Johannes Vermeer’s Little Street (1658) with Velázquez’s View of the Gardens of the Villa Medici in Rome (around 1630 or 1650). The two share structural details and a similarly accurate depiction of outdoor light, but are hugely different in application. Velázquez probably worked in the open air and the brushwork is loose and vibrant, while Vermeer painted in the studio with his usual immaculately even application. Frans Hals provides another show-stopping moment, with his painting The “Mulatto” (Peeckelhaering) of around 1628—a portrait of a blacked-up performer who was a jester for the burghers of Haarlem—paired with Velázquez’s portrait of the dwarf El Primo, one of the buffóns in the Spanish court. Both artists capture their subjects with palpable empathy. 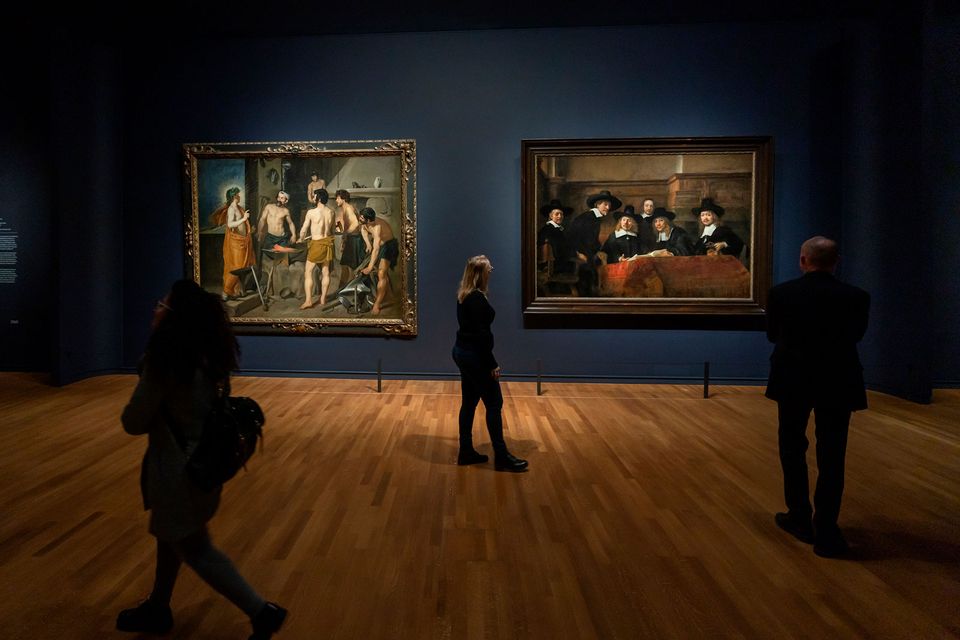 And what of the pairings of the big-hitters in the show’s title? There are five. Two are relatively modest in impact: Velázquez’s enigmatic Sibyl paired with Rembrandt’s visionary image of a prophetess and the Spaniard’s only surviving, small self-portrait alongside Rembrandt’s painting of himself in a beret and chain from 1654. The other three pairings are remarkable in distinctive ways. One unites one of Velázquez’s breakthrough paintings, made on his first visit to Italy, Vulcan’s Forge (1630) with Rembrandt’s The Syndics (1662) as evidence of their prowess in multi-figure compositions. But while each is a masterpiece of psychology and technique, as a pair they fall flat—Velázquez’s figures are full-length, semi-naked, thronging with Italian classical movement and mythological imagination; Rembrandt’s are seated at a table, austerely dressed, restrained in countenance, despite their evident human warmth. Perhaps a far more instructive companion for The Syndics would have been Las Meninas, but, of course, Velázquez’s masterwork will never travel.

Far more striking was the combination of marriage portraits by both artists: of two leading Spanish courtiers by Velázquez and a wealthy young married couple by Rembrandt. These upend the conception of painting in Catholic nations as more extravagant than those in Protestant territories. Both are predominantly in black, but the Spanish couple are portrayed according to a strict compositional system, with an austere power reflective of Felipe IV’s pious monarchy, though with passages of painterly brilliance, particularly in the depiction of textiles. Rembrandt captures the Dutch couple with extraordinary flair and joy—Marten Soolmans in particular is a swaggering figure, bedecked in abundant finery, with vast rosettes on his shoes, silver lace garters and an intricate lace collar.

Then there is the pairing of Rembrandt’s Self-Portrait as the Apostle Paul (1661) and Velázquez’s Buffoon with Books (around 1640). Though both have books in their arms, the subjects could not be more different: Velázquez portrays a jester, there for the amusement of the Spanish court, though his identity and role remain unclear; Rembrandt looks deep into himself, playing the role a biblical character. Both figures meet our gaze on an almost devastating level: Rembrandt’s eyebrows raised with a forlorn, knowing grace, the buffoon with defiance and penetrating intelligence. They are both piercingly human portraits, and seeing them together, in this spectacular show, is one of the most moving and thrilling moments I have ever had in a museum.