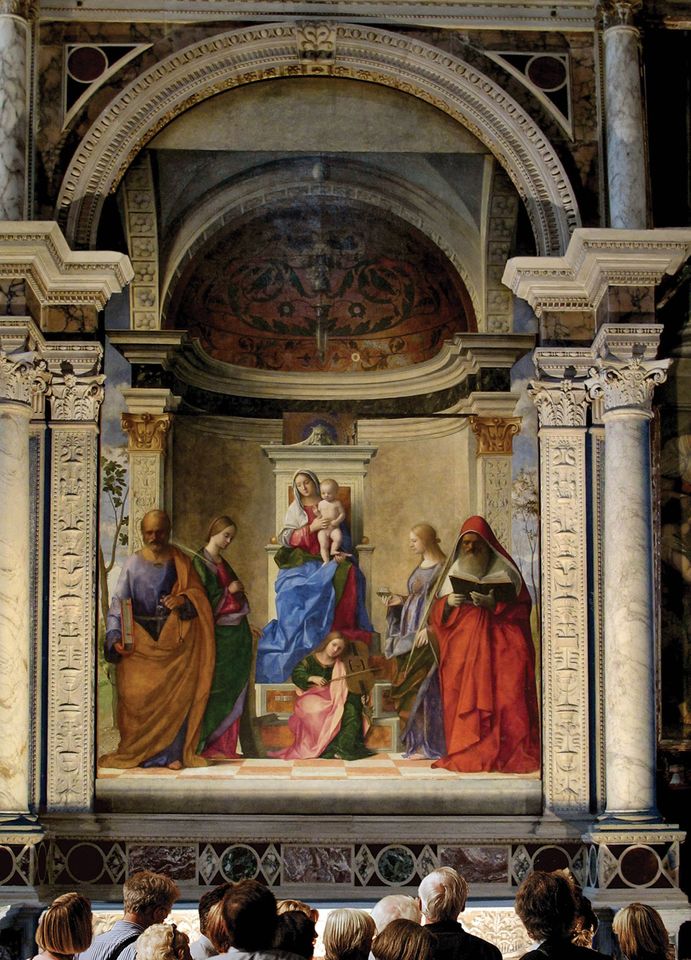 Late development: Giovanni Bellini, the San Zaccaria altarpiece (1505). It is surprising that only towards the end of his life Bellini tackled this kind of painting, reckoned then to be the measure of creative genius Photo © Ismoon

Writing a book on Giovanni Bellini that is both fresh in its critical appraisal of the artist and insightful in its approach is far from a simple task. Not only is the great 15th-century Venetian painter one of the most beloved artists of the Renaissance, but his work has attracted the attention of critics and scholars of remarkably varied persuasions and interests—from John Ruskin and Roger Fry to Roberto Longhi and Hans Belting. Which is all the more remarkable when one considers the fact that throughout his career, the primary activity of his busy workshop was the production and marketing of pictures of the Madonna and Child for private devotion. There were also those major altarpieces that set the basis for the achievement of Giorgione and Titian, but it remains surprising that only towards the end of his life did Bellini tackle the kind of paintings that were, for Renaissance critics, the measure of artistic achievement and creative genius: classical-subject narratives and allegories of the kind that, early on, established the fame of his brother-in-law, Andrea Mantegna.

Giles Robertson, in his still essential monograph of 1968, commented on the character of Bellini’s seemingly unpretentious art by taking the example of his altarpiece in the Venetian church of San Zaccaria. Ruskin had judged this great altarpiece one of “the two best pictures in the world”, and in 1995 it was also the subject of one of Thomas Struth’s remarkable photographs. Robertson observed: “Here we have neither the Roman severity of the Madonna of Victory, painted ten years earlier by Giovanni’s brother-in-law, Andrea Mantegna, nor the splendid rhetoric of Titian’s Pesaro Madonna of some 20 years later, but a point of such perfect balance of form and content, of intention and expression, of drawing and colour, and of such penetrating harmony as goes far to justify Ruskin’s claim.”

It is the paradox of Bellini’s art that the aura of serenity and quiet reflection that pervades his paintings has provoked such remarkably complex, and even conflicting, interpretations. It is as though the very reticence of his art was itself a provocation. Certainly, this is the response of Johannes Grave in his thoughtful book on the artist. As his remarkable command of the literature makes evident, Grave is not new to the field, but he brings to the study of Bellini’s paintings a theoretical approach very much of the 21st rather than the 15th century. The title of his 2012 study of Bellini’s famous Pietà in the Brera—also the subject of a 1985 monograph by Hans Belting—is Zur Paradoxen ‘Mache’ des Bildes (On the paradox of the picture’s ‘pretense’) and it appeared in a collection of essays, Was ist ein Bild? (What is a picture?). 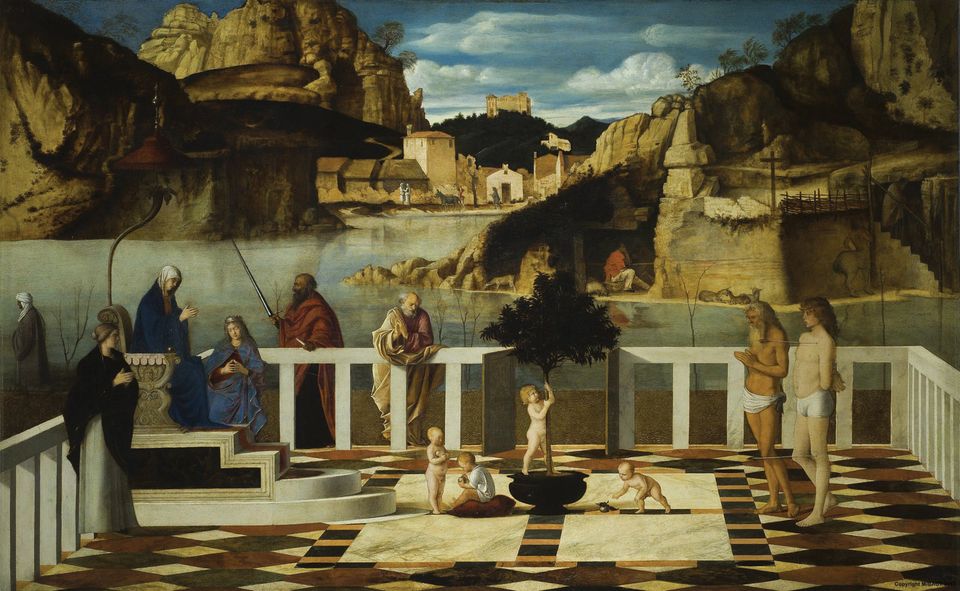 In addition to his writing on Caspar David Friedrich, he is also one of the editors for a collection of essays, The Agency of Display: Objects, Framings and Parerga. It is through this theoretically polished lens that Grave examines the work of Bellini. His analysis of individual paintings will make the artist resonate in a new way with scholars of a theoretical bent but will probably also leave more conventionally minded art historians sometimes wondering, for there is little about the intellectual world and the social dynamics of 15th-century Venice. Not that Grave omits reference to the historiography on Bellini. Indeed, his command of the literature is never in doubt and he is even-handed in its presentation, but he does so primarily to frame his own theoretical interests.

Grave announces his intentions in the opening chapter of the book, titled “A Different Way of Seeing”. Here, we find a discussion of a picture that, together with Giorgione’s Three Philosophers (Kunsthistorisches Museum, Vienna), is unquestionably one of the most enigmatic works of the entire Renaissance: the so-called Sacred Allegory (Uffizi, Florence). It is a curious work on which to posit an understanding of the artist, for we know virtually nothing about the circumstances of its creation. Grave sees this haunting painting as, “an invitation to become immersed in the picture—looking, seeking and thinking—and to comprehend this seeing as its own activity.” No one will disagree with the first phrase. It is with the second—“to comprehend this seeing as its own activity”—that may seem over-reaching.

In his detailed discussion of Bellini’s great Pietà in the Brera, for me, what is missing is the admission that the perplexing Latin inscription on the cartellino on the ledge beneath Christ’s left hand that has engaged the minds of generations of scholars must have been supplied by the person for whom the picture was intended. This means that the linguistic problems Grave, like his predecessors, analyses presumably were not an issue for the person who composed them. He imagines an inquisitive, 15th-century viewer drawing close to the picture to scrutinise the cartellino, and finding him/herself confronted instead “with the basic material conditions of the flat, bounded image: the frame, the wooden panel and the material of paint”. He concludes, “everything the viewer sees is conveyed through the image. But does that make it only an image?” That Bellini meant, in this moving picture intended for meditational prayer, also to comment on the idea of image-making will strike some as anachronistic.

It is in the last chapter, suggestively titled “Ambivalences”, that Grave gives the clearest statement of the theoretical thought process that shapes this book and its ambition of bringing Bellini’s work into the 21st century. He urges us to look at Bellini’s pictures in ways more theoretically informed than has been the rule. Here are two paragraphs that particularly struck a chord with me and exemplify its high-minded seriousness. “Bellini’s supposedly so silent, timeless pictorial art thus proves to be an art of time: the true interest of Bellini’s painting is directed not at the result of looking at an image, but lies in the temporally prolonged process of meditative contemplation and observant thinking. Only in this way could his religious images do justice to the requirements of pious meditation; only in this way did he simultaneously—with his few profane paintings—create works that could become ideal objects of open, intellectually stimulating discussions among learned viewers.” And: “It was the highly developed praxis of allegorical thinking and devout meditation upon God’s creation which crucially shaped Bellini’s painting. It was to this that he owed the impetus to transform the backgrounds of his images into landscapes of meditation. And in working on his sophisticated devotional images and altarpieces, he arrived at the insight that the contemplation of an image, which followed its own distinct laws of temporality, could be deliberately used and shaped by the painter. Bellini’s work therefore marks a crucial phase in the protracted and far from linear transformation of medieval allegorical thinking into the hermeneutics and aesthetics of the image of the modern period… Bellini’s work can be understood as an invitation to experience this openness and its own distinct productivity in a time-consuming contemplation of the image. But most of all, his images invite the viewer to look, to a different kind of seeing, in which sensuality and sense merge.”

• Keith Christiansen is the John Pope-Hennessy Chairman of the Department of European Paintings at the Metropolitan Museum of Art, where he began working in 1977. He has organised numerous exhibitions there and has written widely on Italian painting.