Can yet another Warhol retrospective tell us anything new about the Pop Art icon? 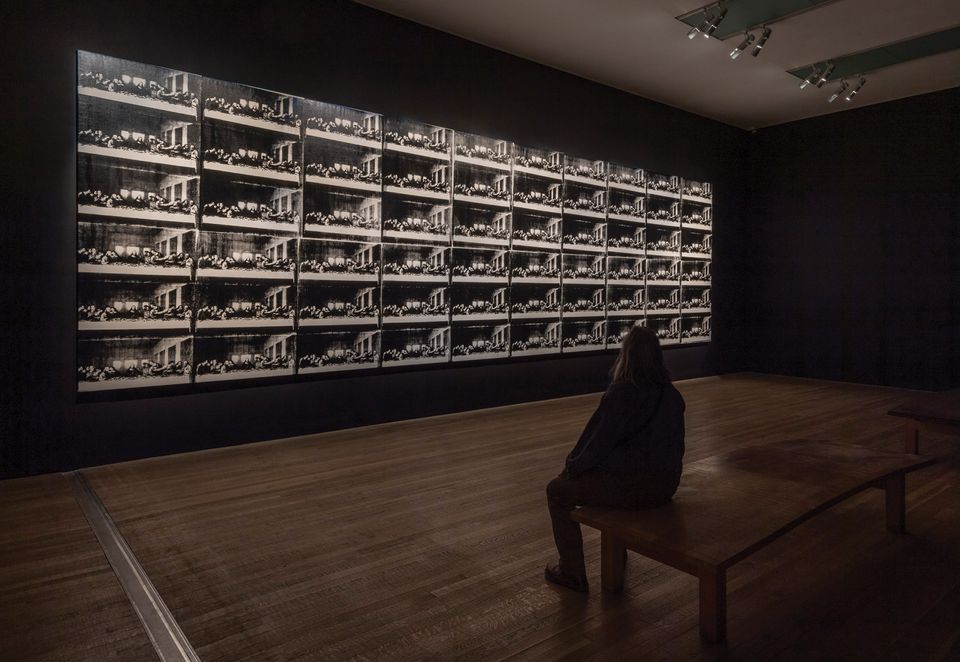 There’s next to nothing we don’t know about Andy Warhol. By my count he’s had four retrospectives in the past 30 years, including one just a year ago at the Whitney Museum. Is Warhol so elastic, so various, or so opaque that every poke at him exposes something new? The answer might well be yes.

The best thing Tate Modern’s show offers—I saw it just before it closed its doors due to the coronavirus (Covid-19) outbreak—is Warhol’s presence. The man is always there: a child of working-class immigrants, an out gay man, a devout Catholic and the target of a bizarre shooting spree by one of his groupies. The show starts at the very beginning, in young Warhol’s Pittsburgh. It’s important to see him as what the catalogue calls “the quintessential American”. Coming from a working-class family who, by the way, he adored, Warhol was always an ambitious striver and a hard worker. He was his family’s first college graduate. Before long, he was in New York and a successful commercial artist specialising in fashion advertising.

Some of his commercial work from the 1950s is in the show. His look is less elegant and proper than sassy, breezy and uninhibited. He specialised in drawing shoes. Warhol, we see, was always a cool cat. Born into a struggling immigrant family, he saw the otherness of both Fashion Avenue and Madison Avenue. He absorbed the zeitgeist of glitz and glamour, but his gimlet eye was always there for casting.

After treating his early commercial work, the exhibition makes hay of the big serial pictures using Warhol’s signature screenprint and acrylic paint technique. It is what you’d expect from Warhol—ironic, fun, sly, colourful, oh, and a plane crash, a car wreck and a suicide. Everything is perfectly installed. Marilyn, Jackie and Mao are there, as are a few Brillo boxes tucked in a corner.

Again, the show’s about his presence. It took plenty of his handwork to degrade Marilyn Monroe’s multiple images, side by side, row after row, as if she’s fading from overuse and overexposure. Making these works look mass-produced was Warhol’s retort to the Abstract Expressionist painters and their love of paint and gesture. I know Warhol’s Marilyns, Coke bottles, and Elvises celebrate, even parody, mass-marketing, but seeing them in the flesh reaffirms their sheer beauty. Lots of Warhol’s later work, especially the portraits from the 1970s and 80s, is jaunty and gaudy. His work from the 1960s can be very moving. 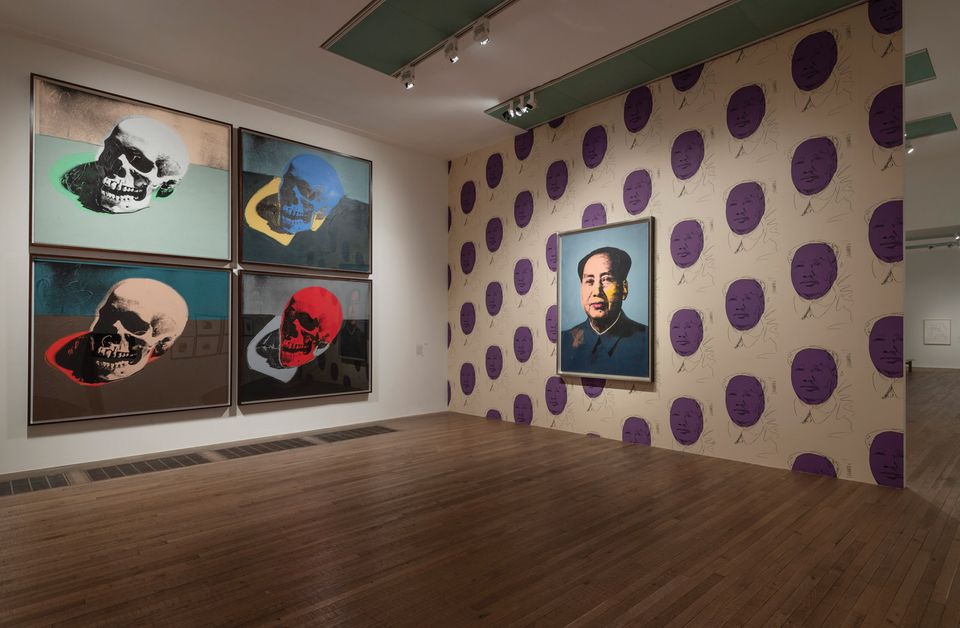 Warhol made Marilyn Diptych in 1962, right after Monroe died. Americans were used to movie-star crash and burn but Monroe, via her looks, marriages and headline struggles, wasn’t your average star. The picture’s neon palette turns grisaille, while the contours go from bold to broken and faded. The luscious, full-lipped, peroxide blonde Marilyn slowly recedes into fragments. Memory and oblivion aren’t far. Warhol’s newspaper pictures like 129 Die in Jet! (Plane Crash) or A Woman’s Suicide, both from 1962, make me shiver. Part of the pathos comes from realising how fleeting those 15 minutes of fame really are. Fleeting, too, is life. Warhol takes the Old Master vanitas and gives it a makeover.

The exhibition presents the Factory as a vital, real place and a beehive for the creative and the debauched. Rock music, dark galleries, and a dense hang of black and white photographs by the young Stephen Shore gave me as close to a “being there” feeling as I’d like, given the Factory’s magnetic appeal to freaks and druggies.

Warhol’s principal work at the Factory was filmmaking. The exhibition screens Sleep, the five-hour-plus film showing a bare-chested John Giorno sleeping. It’s a snooze. You can’t convince me Warhol’s films are anything but trite. They’re known, nattered about, but never actually watched.

Warhol’s Silver Clouds from 1966 came from the Factory at its most high-spirited, creative and, if I might say, buoyant time. It was an interactive display of big, pillow-shaped silver laminate balloons lightly anchored with small fishing weights. The show smartly recreates a space for them. Visitors to the exhibition were invited to, given the times, fist, elbow or hip-bump the glossy, steel-coloured things into the air. But Silver Clouds was serious: it’s Warhol’s taunt at pompous, bloodless Minimalists like Donald Judd.

The Factory’s Svengali met his match in 1968, when Valerie Solanas, one of the Factory’s lost ones, shot him. The show has a good, deeply considered section on the shooting. It darkened Warhol and after it, his career pivoted. He became, first and foremost, a magazine publisher and professional celebrity, and only secondly an artist. He was terrified of hospitals and death. I can’t help thinking, though, looking at his films, that a profound coarsening was underway in Warhol before the shooting, as well as a loss of vision.

The recent Whitney show tried too hard to make Warhol’s art in the 1970s and 1980s better than it is. There, his pitiful collaboration with Jean-Michel Basquiat, his Maos and the Oxidation and Camouflage pictures were extolled far beyond their merit. Mostly, he didn’t have much to add. The Tate treats this period differently and more successfully. First, it considers Warhol as a media figure, not only through Interview, the magazine Warhol started in 1969, but in his countless TV, tabloid and society page appearances. Second, it contends that Warhol manoeuvred queer identity to the centre of the Pop art movement, and this new visibility was good and transformative. I say it was inconsequential.

Warhol claimed his in-your-face effeminacy—what he called “the swish thing”—was a performance meant to place gayness side-by-side with the hyper-masculinity of the Abstract Expressionists. It was also a challenge to homophobic collectors who wanted his work. “Accept me as I am,” Warhol demanded. 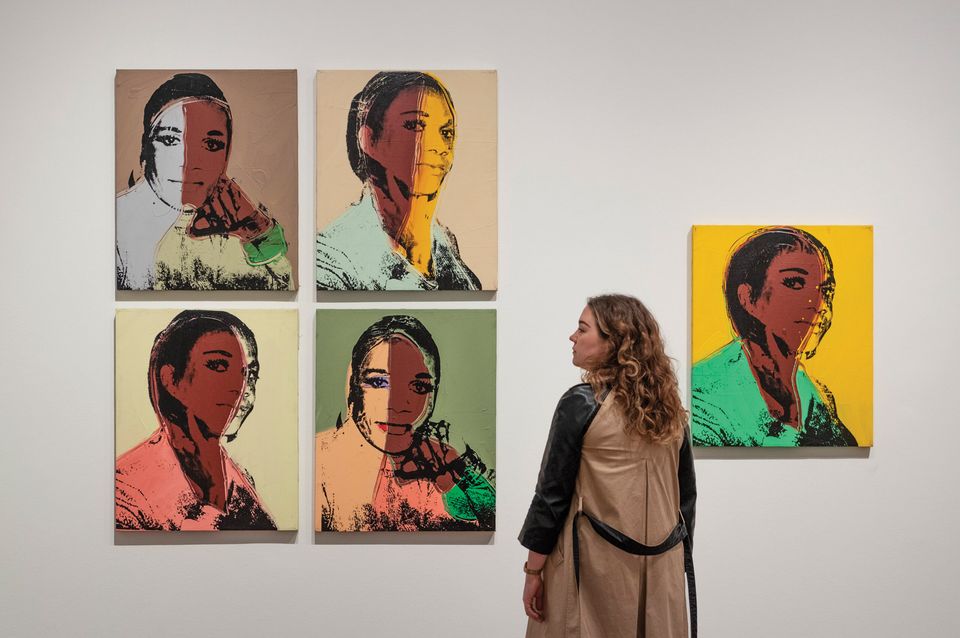 Warhol's Ladies and Gentlemen portraits of drag queens and transsexuals, made in 1975 © Tate, 2020

His Ladies and Gentlemen portraits of drag queens and transsexuals done in 1975 capture their strength, beauty and vitality and affirm their sexual fluidity. They’re stunning. I agree they’ve been minimised in Warhol studies, in part because Warhol never pushed the point. Through them, he became, the curators claim, a pioneer of gender subjectivity.

I’ll parse these contentions. No one, even in the 1960s, thought Warhol wasn’t gay. He was visible and open to a degree novel for American celebrities. He wasn’t crushed because of who he was. He was, therefore, a hero—though a marginal one. While accepted as gay, he never spoke about it. He was far too androgynous, even sexless, to ever be seen as a role model. Did he poke fun at gender roles? Yes, but cautiously, and when it was cost-free. Drag queens did it with fearless gusto. Gay men owe far more to them. If anything, Warhol was the gay jester moving among New York’s monied elite, dropping barbs that got a chuckle but, here and there, made people pause and think.

The Stonewall riot was a blip for him. Whatever megaphone the celebrity Warhol had was silent during the early Aids crisis. He shunned men with Aids, fearing he’d catch what he called “gay cancer”. By the 1980s, the artist Warhol had been displaced by the Pictures Generation, Aids art and feminist art. Aids, movies like La Cage aux Folles and Victor Victoria, and plays like Bent, were far more radical and impactful than anything he ever did or was.

The exhibition ends with Warhol’s big, bold Sixty Last Suppers from 1986. It’s an end-of-life picture, though Warhol, at 58, didn’t know it. He’d been commissioned to create a group of works based on Leonardo’s Last Supper for display in a gallery space across the street from the Milan church the original decorates. He went far beyond the call of duty, making over a hundred takes on the subject, of which Sixty Last Suppers is the biggest. He died a month after the opening, after a much-delayed gall bladder operation.

The catalogue calls it “a moving portrayal of endless loss” and links it to the Aids crisis. It stops there, and that’s not right. It’s a major picture. Warhol was so fixated on death it might as well be cast as the kind of contemplative, essentialist, and valedictorial work old artists make when they know time’s up.

It’s a thicket of a picture and Warhol must have approached it with swirling, hot emotion. How gay is it? It’s a gathering of confirmed bachelors. Gay rights were unspoken in Catholic circles beyond straightforward condemnation, but starting in the 1980s, edicts wouldn’t do. Aids was the great black cloud. Gay, black and women’s liberation movements were busting barriers. 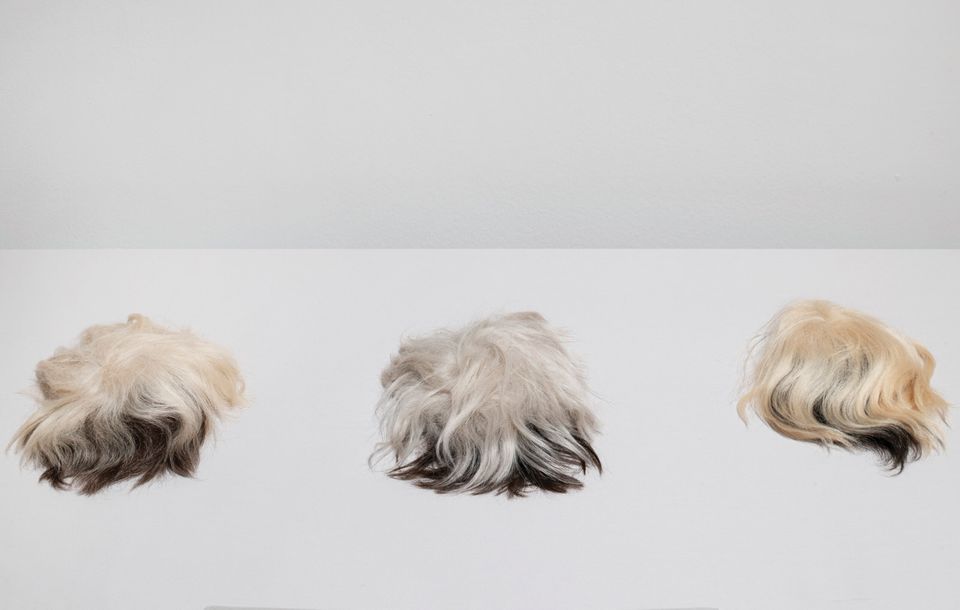 Warhol’s wigs, made by Paul Bochicchio, at Tate Modern © Tate

Warhol was a devout Catholic, an old-fashioned churchgoer—the Pittsburgh boy never leaves—as well as an unrepentant sinner. Though most if not all of his sex was fiddling, fiddle away he did. On some of his Last Suppers, he slaps logos from companies such as General Electric over the figures. What’s with the mix of sacred and profane? Leonardo’s themes—young men being hunted, death, betrayal, sacrifice, piety and acceptance—must have created in Warhol an inexorable push and pull of emotion. Was he ever able to sort the contradictions? The show doesn’t help.

The problem might be that religion makes art historians uneasy, as surprising as this sounds since lots of art is religious. Curators, academics and critics are secular. It’s private, too, and often inscrutable. Still, for a project that puts Warhol’s biography at the centre, leaving this thread hanging makes less an apotheosis than a thud.

Still, it’s a fine exhibition and introduces Warhol to a new generation. Its intelligent, incisive thinking keeps the conversation going, and the art’s very good. With Warhol, all routes are circuitous.