The Big Review: Kent Monkman at the Met 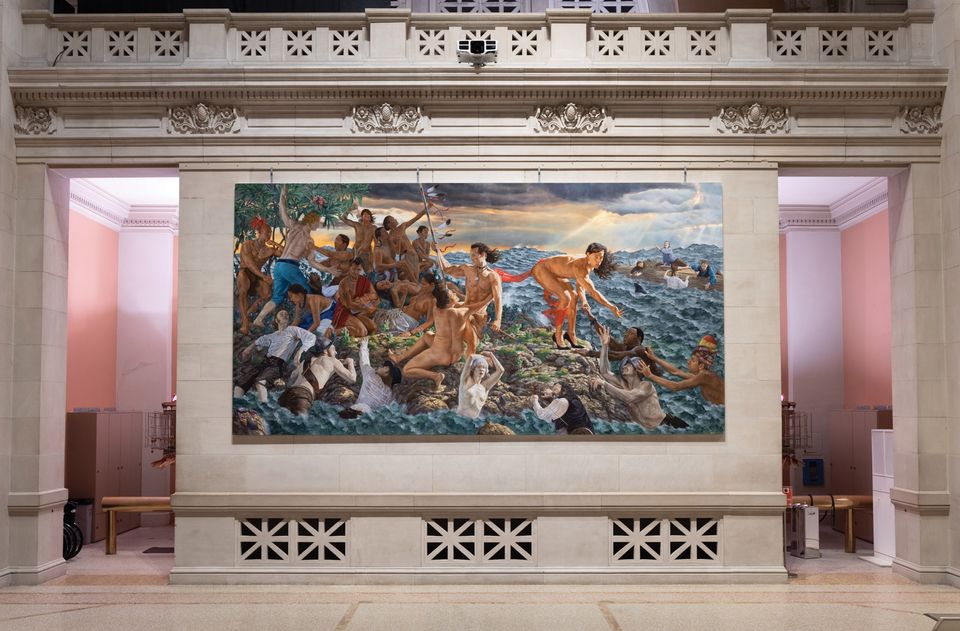 Shattering impact: Welcoming the Newcomers, one of two monumental paintings (each almost 11 feet by 22 feet) by Kent Monkman in the Great Hall of the Metropolitan Museum, New York Photo by Anna-Marie Kellen

Can any museum space in the world rival the sublimity of the Great Hall of the Metropolitan Museum of Art, its soaring vaults emulating the Baths of Caracalla in Rome? Amid the throng of visitors there rise two colossal statues, representing ancient Egypt and Hellenistic Greece—stone gatekeepers portending the magisterial scope of the universal survey museum. Beyond, the great staircase ascends to the galleries of European paintings, the culmination of histories begun in the Egyptian, Greek, Roman and Medieval collections beneath. This is the inner narrative amid the Met’s unmatched gathering of world civilisations.

Prime position in the Great Hall, at the epicentre of the Euro-American canon, gives an electric charge to the Met’s latest commission, two massive paintings by Kent Monkman, whose identity as a Cree artist, a member of Canada’s First Nations, authorises him to offer a coruscating Indigenous critique of the project of European colonialism and the forms of art integral to it. He does so with a witty, in places camp, inversion of the machinery of history painting—the genre held in academic theory to represent the zenith of Western art. The result is both delicious for the contemporary viewer and deadly to the Eurocentric and heteronormative certainties of the Met’s founders. This commission, representing the museum’s shifting priorities on its 150th anniversary, is of no small significance.

The complex, multi-figure paintings, each measuring almost 11 feet by 22 feet, bear the collective title mistikôsiwak, a Cree term meaning “wooden boat people”—those who arrived in ships and conquered and occupied the Americas. In Monkman’s compositions, the story of 1492 and all that—mainstay of bombastic canvases and illustrations in textbooks—appears as you’ve never seen it before. Welcoming the Newcomers reconceives the moment of contact. A motley crew of Europeans is shipwrecked on the coast of north America in a scene nodding to Géricault’s Raft of the Medusa. These boat people are from all over the world: some wear the helmet of the conquistador, others the severe black hat of the Puritan.

For all its sharply honed political message, Monkman’s work is no dour sermon on identity politics. For the key figure in the mistikôsiwak paintings, clad in no more than high heels and a hot pink silk wrap worn with Botticellian flair, is his gender-bending alter-ego, Miss Chief Eagle Testickle. This mythic persona comes to life as the protagonist of Monkman’s provocative live performances. She is a witness to history, an irrepressible figure alluding to Indigenous traditions that embrace nonbinary sexualities. She extends a hand of welcome to an enslaved African emerging from the water in shackles. When this continent lay in the hands of its true Indigenous owners, Monkman suggests, migrants were welcome, a timely thought in Donald Trump’s USA.

Kent Monkman's Resurgence of the People (2019) Courtesy of the artist

Monkman readily acknowledges the power and value of Euro-American art and assimilates its methods, though the richness of its legacy is for him (as it should be for everyone) entangled with the violence and suffering inflicted by European colonisers. These canvases represent a mighty labour on his part and on that of his studio assistants: mistikôsiwak is the product of an atelier of Rubensian scale and ambition. Working in acrylic, Monkman makes extensive use of photography. His crisp, vivid style is illustrative rather than painterly—the message is the medium, as in Soviet Realism.

Mischievous citations of works in the Met’s collection pepper these works, as curator Randall Griffey explains in an informative blog. Welcoming the Newcomers quotes two versions of Venus and Adonis—Titian’s, painted in Venice in around 1550, and that of Rubens, from the 1630s. Following the hallowed protocols of history painting, Monkman quotes Titian’s group as a model for a couple of strong, Indigenous figures in Welcoming the Newcomers. Their bodies decorated with handsome tattoos, these two are seemingly evenly balanced with neither male nor female prevailing. In a more troubling appropriation, Rubens’s spear-bearing Adonis is paraphrased as a male settler who reaches out to grope an Indigenous woman, her mouth open in horror. This female figure is adapted from a painting in the Met’s American Wing, Henry Inman’s 1833 transcription of a portrait of Hayne Hudjihini, Eagle of Delight, made by Charles Bird King in 1822. That year, Hayne Hudjihini accompanied her husband, Chief of the Otoe-Missouria people, on an ambassadorial visit to Washington, where they met President James Monroe. Her grace, refinement and intelligence were much admired. Shortly after her visit, Hayne Hudjihini died of measles. Monkman’s appropriation of Rubens reveals the full violence of the colonial encounter: the skin of the violated woman already betrays angry red pocks, marks of the genocidal diseases brought across the Atlantic by mistikôsiwak. 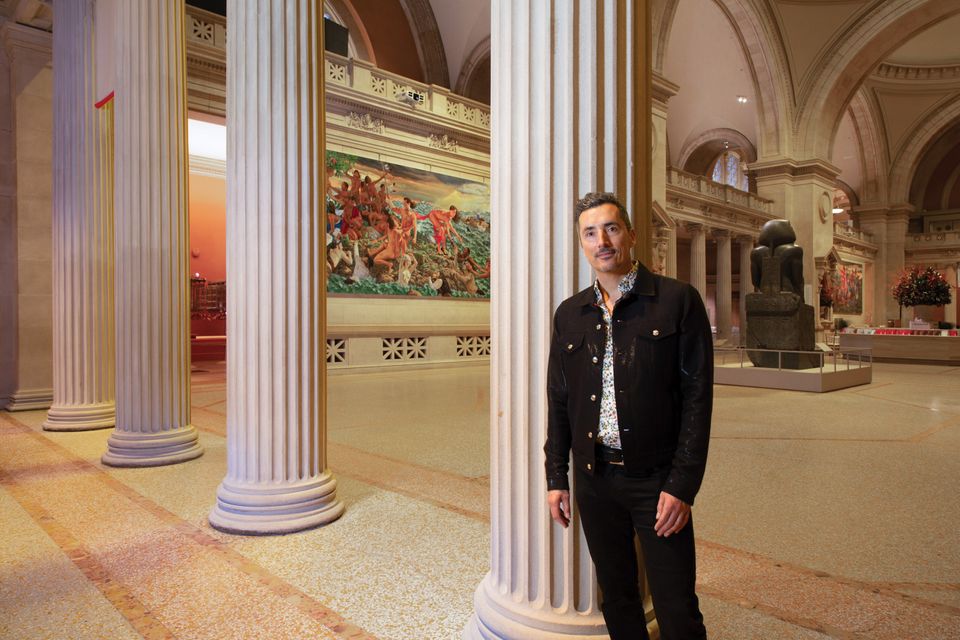 Across the hall, the second canvas, Resurgence of the People, presents a robust account of the continuity and vibrancy of native American cultures in the modern world. In a delightful inversion, it is Miss Chief Eagle Testickle who crosses the Delaware, replacing George Washington in a paraphrase of a grandiose history painting of 1851 by German-American artist Emanuel Leutze. Monkman’s move was foreshadowed by a recent curatorial intervention at the Met in the specially constructed gallery housing the Leutze: new labels written by Indigenous scholars offer Native American perspectives.

At the core of Monkman’s project lies a determination to contest the representations he encountered at the Met in which native Americans appear melancholy or sickly, a dying culture. Icons of this “last of their race” genre repurposed by Monkman include Augustus Saint-Gaudens’s pensive marble Hiawatha (carved 1874), and the ailing The Natchez, painted in 1823-24 by Eugène Delacroix, after a novella by Chateaubriand. Taken up in Resurgence of the People, they reappear in a boat filled with Indigenous people from across North America. In vibrant good health, this group foreshadows a future that weaves traditional practices into the fabric of modern life. Settler-colonial culture, by contrast, is reduced to a group of militiamen marooned on a rock, aimlessly waving their automatic weapons in the air – a nice parody of the antics of the National Rifle Association and white nationalism in Trump’s USA. The turbid, rising waters are the result of global warming, a Euro-colonial product that contrasts with responsible Native American husbandry of the land.

What will become of these works when they are removed from the Great Hall in April? Surely they will be acquired for the Met and displayed… where? Among the European history paintings they emulate and lampoon? With Contemporary Art where their historical purchase would be weakened? Or perhaps the American Wing? For years this hallowed space narrated an unabashed settler-colonial narrative, but now it hosts a display of Native American art and fine exhibitions such as the recent Artistic Encounters with Indigenous America, co-curated by artist Wendy Red Star (Apsáalooke/Crow) and the Met’s Shannon Vittoria.

Kent Monkman’s intervention cannot but leave a permanent trace on the Met’s understanding of its collections. Indigenous voices must continue to upend the museum’s unspoken assumptions. The shattering impact of this bold commission demands a permanent memorial. A prominent land acknowledgement in the Great Hall to the Lenape, traditional owners of the island of Manhattan (Manahatta), would affirm that the mistikôsiwak are at last coming to terms with history as well as art.