The road to the Venice Biennale is paved with good intentions

Art matters. It is more than a commodity to be bought and sold by the rich or a frippery for extravagant lifestyles (yes, Jeff Koons handbags for Louis Vuitton, I mean you). In her exhibition for the Venice Biennale, Viva Arte Viva, the Centre Pompidou’s curator Christine Macel has produced a manifesto of sorts for a much wider interpretation of art’s role: its ability to bring communities together, bridge divides, open minds and changes lives. So far, so good.

At the heart of the first half of her show in the Giardini, Macel has invited the Danish-Icelandic artist Olafur Eliasson and Francesca von Habsburg’s TBA21 to set up the Green light workshop where some 40, mostly black, refugees living in Mestre, the industrial Venetian mainland, work together to build lamps (on sale for €250 each with proceeds going back to the project). Members of the public can work alongside the migrants and hear their stories. Some do. Others snap pictures awkwardly on their iPhones and hurry past. This then is art as social practice, where the sale of work directly benefits those most in need. And yet…

This project has caused heated internal debate at The Art Newspaper. Some colleagues appreciate it. I do not. At least not in this context. Everything about putting refugees on display as exhibits in an art show feels wrong to me. Yes, they are consenting participants. But how many options do they really have? Are they in a position to turn Eliasson’s offer down? Why not organise a project with them off site instead of parading them in front of the public? Let people interested in the project seek it out. Let the others gawp at something else. This is not art in service of migrants but migrants in service of an artistic and curatorial vision.

At the Arsenale, there is more of the same. The Brazilian artist Ernesto Neto’s possibly well-intentioned but deeply self-serving Sacred Place consists of a soaring jute and cotton tent which encloses a space decorated with plants, with woodchips strewn on the ground, and full of cushions for visitors to sit on. This is intended to replicate the structure of the Cupixawa, a ceremonial meeting place for the Huni Kuin Indians living in the state of Acre in the Amazonian forest. In tents such as these, they meet to drink ayahuasca, a plant-based hallucinogenic substance, which apparently enables them to connect with nature and “heal the wounds of a sick modern society”. (It is also incidentally the new favourite recreational substance of the organic hipster set.) Lest we fail to appreciate that Neto has personally engaged with this community, he has some actual Huni Kuin Indians to hand, complete with feathered ceremonial headdresses, to drive the point home. In a performance at the exhibition opening, they sit under the tent while Neto talks and then talks some more. If this project is about giving the Huni Kuin a voice, why is it the artist doing most of the talking?

I clearly missed the point of this elaborate recreation (perhaps some ayahuasca would have helped). But it seems to me that not since Europeans brought indigenous people back from the Americas or Africa to keep as courtly pets or exotic curiosities has it been so fashionable to display the dispossessed and disadvantaged. Is this a disturbing new trend in contemporary art?

Elsewhere in Macel’s exhibition we are offered other examples of art’s healing powers. A video documents the US choreographer Anna Halprin’s Planetary Dance, a gathering of middle-class white people on a hilltop in Marin County, California, where they chant, run around in circles and express their horror for all war and violence. Halprin staged this performance in 1981 to “reclaim” Mount Tamalpais from the clutches of a serial killer who was targeting female hikers in the area. People were “gripped by terror” the video informs us. But then Halprin staged her Planetary Dance and the killer was caught! Amazing. 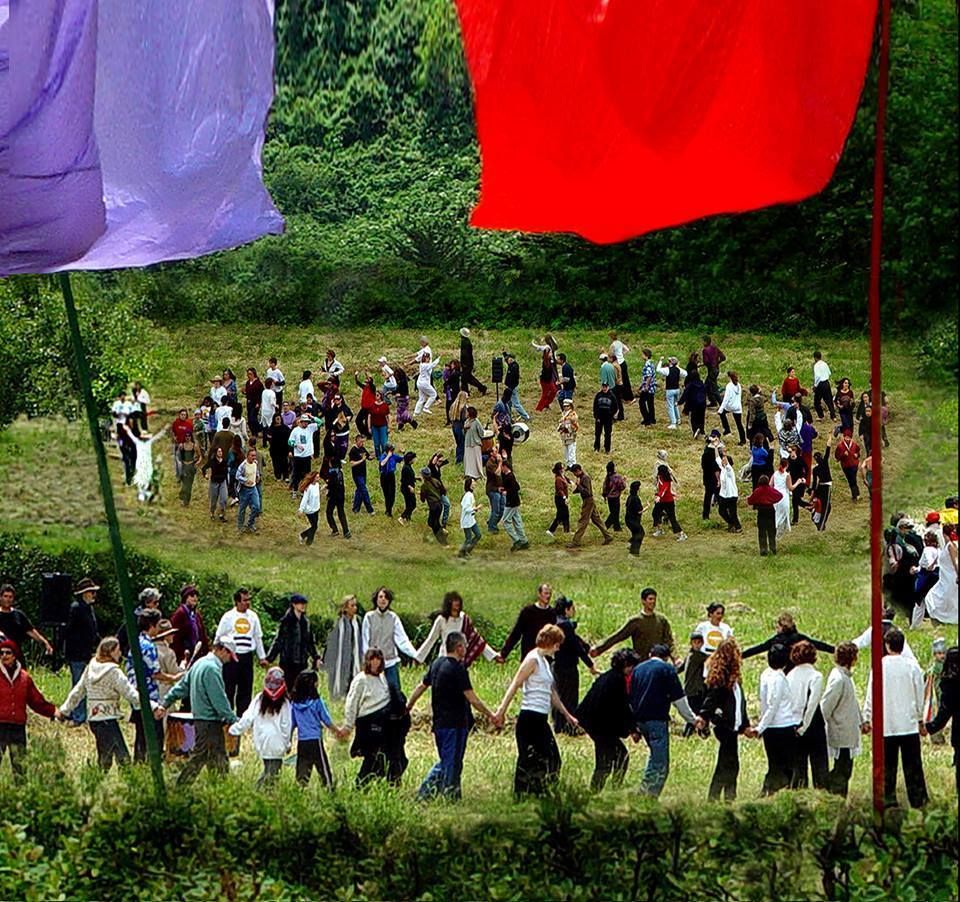 A video documents the US choreographer Anna Halprin’s Planetary Dance, a gathering of middle-class white people on a hilltop in Marin County, California, where they chant, run around in circles and express their horror for all war and violence

It may be fun, even life-changing, to take part in a Planetary Dance. I don’t know because I’ve never done it. What I do know is that it is neither fun nor life-changing to sit through a video of one. Then there is a video of a bunch of people in coloured masks eating a multi-coloured buffet in Cologne in 1971, a food performance by Antoni Miralda and Co’s Ritual in Four Colours. There is red and green spaghetti. People eat it. Watching this video is a bit like being subjected to the holiday snaps of strangers: meaningless.

Having plodded through Macel’s Biennale exhibition twice, I have many questions. Why is there so much sewing? I get it: domestic work, womens’ work, is important and undervalued. But is it in itself art? No, it is not. There is a beautiful installation by the Taiwanese-born artist Lee Mingwei called the Mending Project in which the artist or a performer mends garments provided by the public and then connects each item of clothing to the wall behind with a thread thereby creating a rainbow of coloured strings. About the other sewing projects, the less said the better.

Of course, there are some interesting and even great pieces in this Biennale by the likes of the Brit Karla Black, the Swiss artist Julian Charriere and the Brazilian videographer Ayrson Heraclito, to name just three among many others. But they are stranded in a sea of dull and lifeless works.

Paradoxically, in her attempt to argue that art is much more than its market, Marcel has completely overlooked its power to impress and seduce us with its visual appeal or its capacity to engage us with its complexity. This is a pedantic, didactic and at times offensive show that will have us running to the next round of contemporary art sales at Christie’s or Sotheby’s just so we can see some good art. It is an experiment that has seriously backfired.

Cristina Ruiz is a former editor of The Art Newspaper. This is her ninth Venice Biennale