Three social media feeds to scroll through this weekend 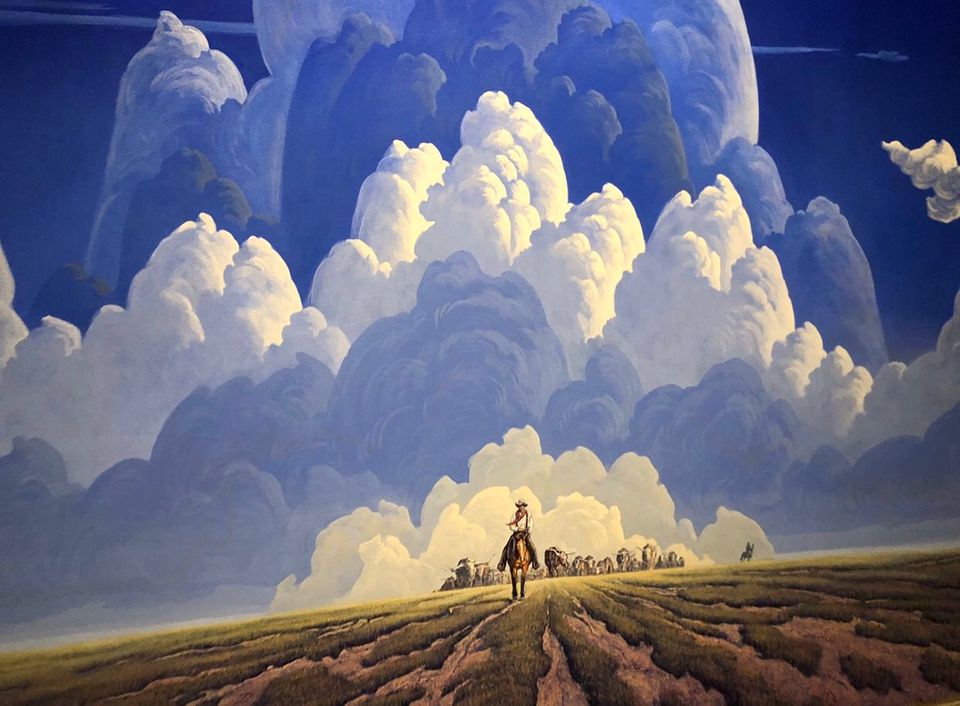 Tim, on social media duty for the National Cowboy Museum, explained on Twitter that work depicted on his morning mug is the painting Out of the Blue (2018) by Phil Epp. "I like to zoom in on the little details. Lol! #HashtagTheCowboy", he writes.

What do you do when your museum is shut and most of your staff are sent home? Hand over your social media account to your head of security, of course. The National Cowboy & Western Heritage Museum in Oklahoma City—home to portraits of Buffalo Bill and Geronimo, beautifully worked Native American moccasins, Winchester rifles, horse saddles and currently an Andy Warhol and a Dorothea Lange show—closed on 17 March and handed over its Twitter account to Tim. He posts pictures during his rounds, such as one of Lange, adding that “She looks like someone I’d want to have a beer with”, or tells bad jokes: “Know why cowboys drink coffee while wrangling their herd? They need the calf-eine! Lol!”. When this year’s Western Heritage Awards were cancelled he shared a picture from last year’s when he met Kevin Costner: “He was very funny. Unfortunately there’s no dancing at the awards or wolves”. Some of his mistakes seem too good to be true (accidentally tweeting his Google search “Twitter tips, please”) but Tim’s light-hearted take on the museum has proved so popular that it has had special T-shirts made of his favourite hashtag: “#HashtagTheCowboy”. Yee-haw!

The Solomon R. Guggenheim teaching artist Jeff Hopkins, an enthusiastic educator, has invited children to pick up a pen and let their imagination run riot on paper. Twice a week, Hopkins posts his own Sketch with Jeff videos on the museum’s website, drawing overlooked works from the collection that act as a springboard for sketching. In a recent episode, Jeff asks participants to create weird beasts by combining the bodies of different animals, giving his own example of a cartoonish pig with wings (a sow crossed with a bird in other words). This wacky crossover image is inspired by Franz Marc's painting Yellow Cow (1911) which shows a frolicking bull set against a series of lurid triangular blue mountains. Previously, Jeff focused on trees, demonstrating to his young audience how Vincent Van Gogh used lines and marks to create curved trunks in the drawing The Road to Tarascon (1888). Children are encouraged to share their sketches on Instagram and Twitter @Guggenheim, using the hashtag #SketchWithJeff.

You know you must be doing something right on social media when the usually anonymous person behind an account gets a feature in the New York Times. But this is exactly what happened to Adam Koszary, the social media editor at the Royal Academy of Arts (RA) in London. Koszary came to prominence at the Museum of English Rural Life, whose Twitter account garnered a cult following after his tweet of a ram went viral. At the RA he has kept this up with witty posts, full of dry humour. As well as sharing the usual artist interviews, articles and virtual shows, the RA’s Twitter account also shares fun facts (“Did you know that the French word for ‘art’, is ‘art.’”); pokes fun at the art world, with a taped toilet roll à-la-Maurizio Cattelan; while always encouraging user interaction (“Tell us about the art in your toilet as though you are a curator”). The account has been setting tasks each day during the lockdown using the #RADailyDoodle hashtag, asking for drawings of things such as bluebells, Laocoön and his Sons, ham, or your favourite pair of shoes.