From the largest Leonardo da Vinci show in half a century, at the Queen's Gallery, to the first retrospective of Luchita Hurtado at the Serpentine Sackler Gallery 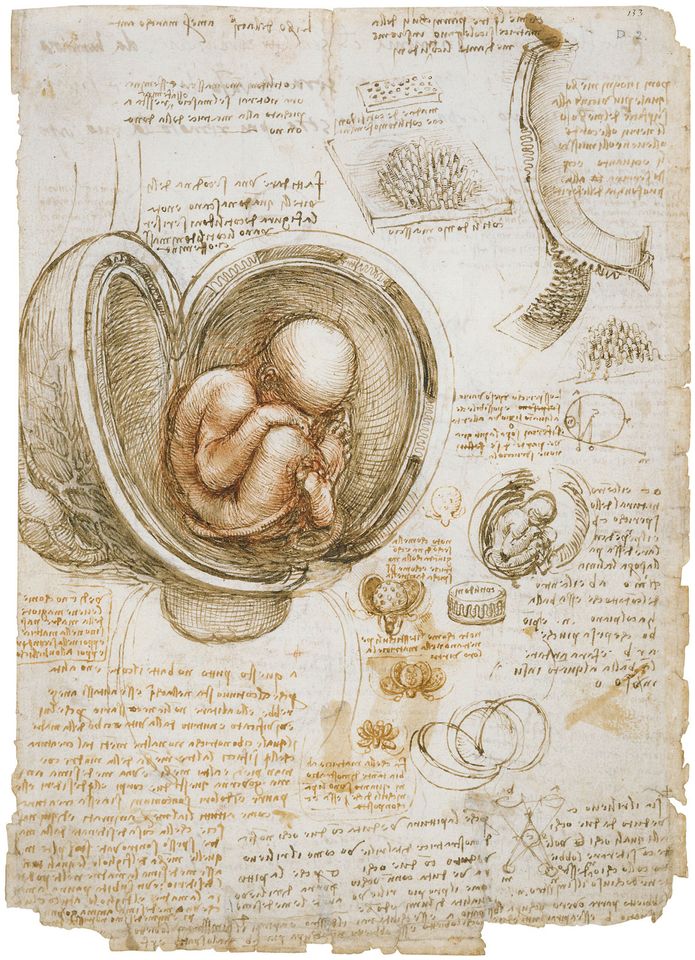 Leonardo da Vinci's The fetus in the womb (around 1511) is on show at the Queen's Gallery © Her Majesty Queen Elizabeth II 2019; Royal Collection Trust

However true the latest scientific theory may be that Leonardo da Vinci suffered from attention deficit hyperactivity disorder (ADHD), the Queen’s Gallery exhibition of 200 drawings by the Renaissance master presents a dazzling panorama of the workings of a hyperactive mind. Drawn entirely from the UK’s Royal Collection, it is the largest show of Leonardo’s work in more than 65 years. For anyone who has been underwhelmed by the sedate charms of the Mona Lisa, the drawings on view in Leonardo da Vinci: a Life in Drawing (until 13 October; tickets £13.50, concessions available) are startling for their dynamism and physical presence. Many sheets are dense with disparate sketches and annotations, pentimenti, smudges and stains, testifying to Leonardo’s process of thinking on the page. A series of vitrines displaying examples of the tools he used—unwieldy metalpoint, oak galls to crush for ink, soft natural chalks sharpened on sticks—are a helpful reminder of the draughtsman’s craft. What emerges most of all is Leonardo’s endless curiosity about the world. Studies for The Last Supper and other paintings take their place amongst grotesque caricatures, sensitive botanical illustrations, designs for equestrian monuments and weapons, maps and astonishing anatomical diagrams based on extensive dissections. If ever you needed proof that Leonardo da Vinci was a true Renaissance man, this show is it.

The Serpentine Sackler Gallery has pulled off a coup with the first solo exhibition in a public institution dedicated to the 98-year-old Venezuela-born artist Luchita Hurtado. I Live I Die I Will Be Reborn (until 20 October; free) brings together a treasure trove of newly discovered works dating from the 1940s to today, reflecting the scale and significance of Hurtado’s practice over the past 80 years. Visitors move anti-clockwise around the gallery on a chronological route, encountering distinct bodies of work from pioneering self-portraiture in the late 1960s, when Hurtado began to write “I Am” on the canvas, to recent activist pieces championing ecological awareness. The show ends on the Birthing series—graphic depictions of a pregnant body in the process of giving birth—which symbolises the artist’s belief that all life forms are part of a single, living entity (in other words, we’re all connected by one very big umbilical cord).

Hauser & Wirth celebrates 100 years of the Bauhaus School with a show dedicated to the Hungarian artist and Bauhaus professor László Moholy-Nagy. The exhibition, titled simply László Moholy-Nagy (until 7 September; free), includes abstract oil and graphite works on canvases hung alongside collages on paper that show equations and sharp angles, all employing an avant-garde, mechanical language. But it is in Moholy-Nagy’s exploration of film and design where his position at the forefront of the Modernist deconstruction of art is truly cemented. A black and white film showing dappled light, playfully filtered through intricate, moving machinery is the result of experimentation with his sculpture Light Stage for a Prop (1930). A contemporary recreation of said machine stands opposite—a beautifully balanced structure made of perforated metal discs, cut glass and chrome. Every hour, at precisely half past, the self-automated machine comes to life rotating slowly on its axis, reminding us how pioneering Moholy-Nagy’s experimental work was and honouring an artist who possessed the experimental “curiosity of a scientist”, according to the Bauhaus founder Walter Gropius.