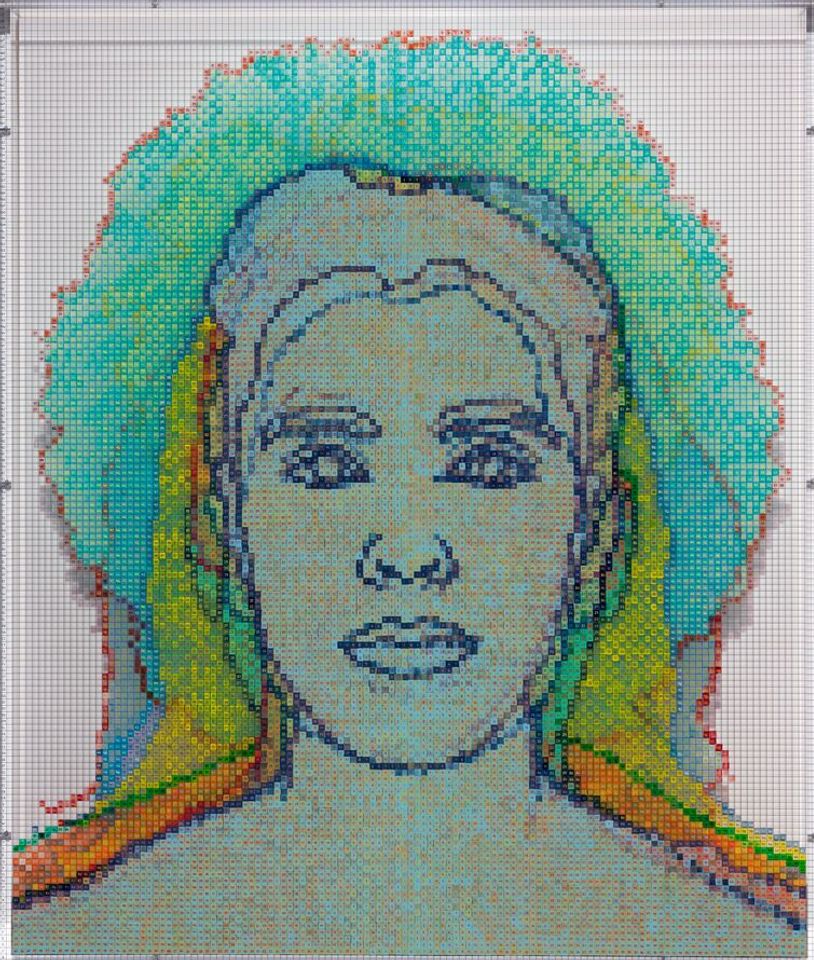 For his first UK solo exhibition, the Los Angeles-based artist Charles Gaines, one of the key figures in American conceptual art, unpeels the layers of faces and trees through two bodies of new work. In Numbers and Faces: Multi-Racial/Ethnic Combinations Series 1—a continuation of the Faces series begun in 1978—Gaines explores the concept of multi-racial identity by sequentially mapping on Plexiglass grids the contours and features of three separate faces, overlaying colours on individual squares in the style of a sophisticated painting-by-numbers piece. Black-and-white photographs of each sitter appear on the back panel of each work; part of the appeal comes from doing a double-take, switching between the person’s portrait and his or her numbered deconstructed form on the Plexiglass.

The Numbers and Trees London series is inspired by the gargantuan specimens Gaines examined and photographed during a visit to Melbury in Dorset early 2020. The artist plumped for the Dorset trees “having noticed [their] immense width that would translate perfectly to the increased scale in which he wanted to work”, says a gallery statement. Leaves and bark coalesce from afar but pixelate up close.

You can listen to our in-depth podcast conversation with Charles Gaines where we discuss the exhibition, along with his greatest cultural influences, here. 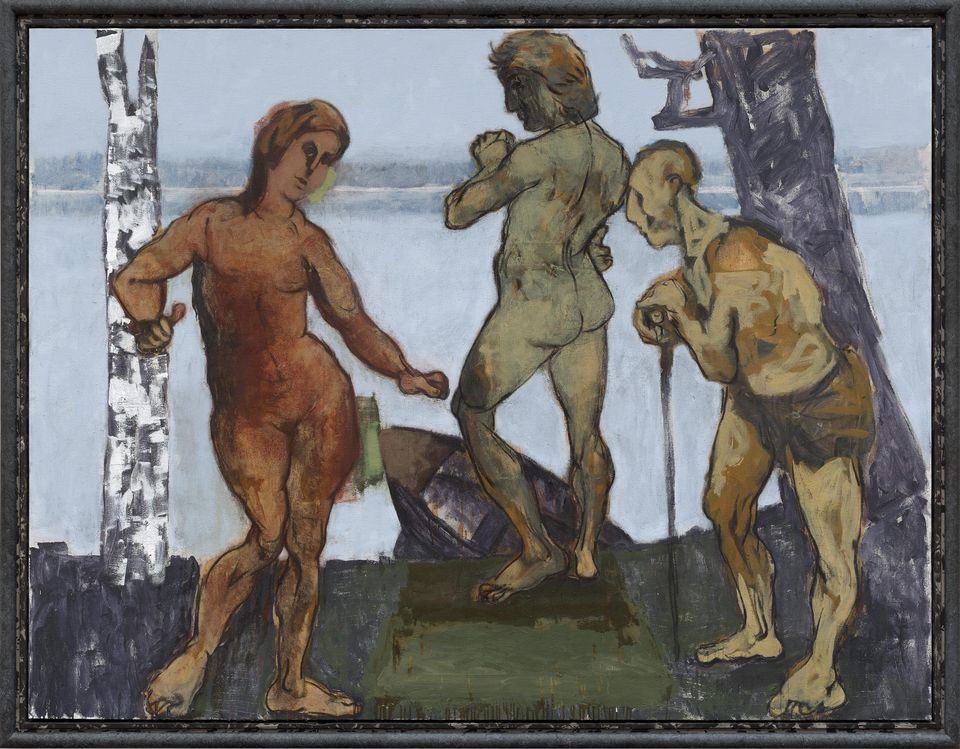 The 80-year-old Markus Lüpertz, one of Germany’s most notable living practitioners of Expressionism, takes the theme ofArcadia—a utopian pastoral vision—as the starting point for this series of paintings made over the past four years that confronts Classical mythology and sculpture. Something of a departure from his earlier work that depicts the bleakness and trauma of post-war Germany, here muscular and fulsome nudes nod to Rubens, while challenging Classical ideals in their sketch-like, undisciplined strokes and frames marked so haphazardly as to resemble graffiti. Painted between his studios in East Germany and Tuscany, they mix saturated, warm palettes with starker landscapes. Elegiac in tone, they also broach a thorny relationship with the past.

Acteon (2020) depicts a well known mythological tale in which the eponymous herdsman is turned into a deer by an enraged Artemis. Famously captured by both Rubens and Titian, this time round, Lüpertz underscores the impact of Acteon's transfiguration. Yes he may be turned into another species, but can Artemis and her nymphs, so crudely depicted with hollow eyes and blank expressions, claim much more humanity? 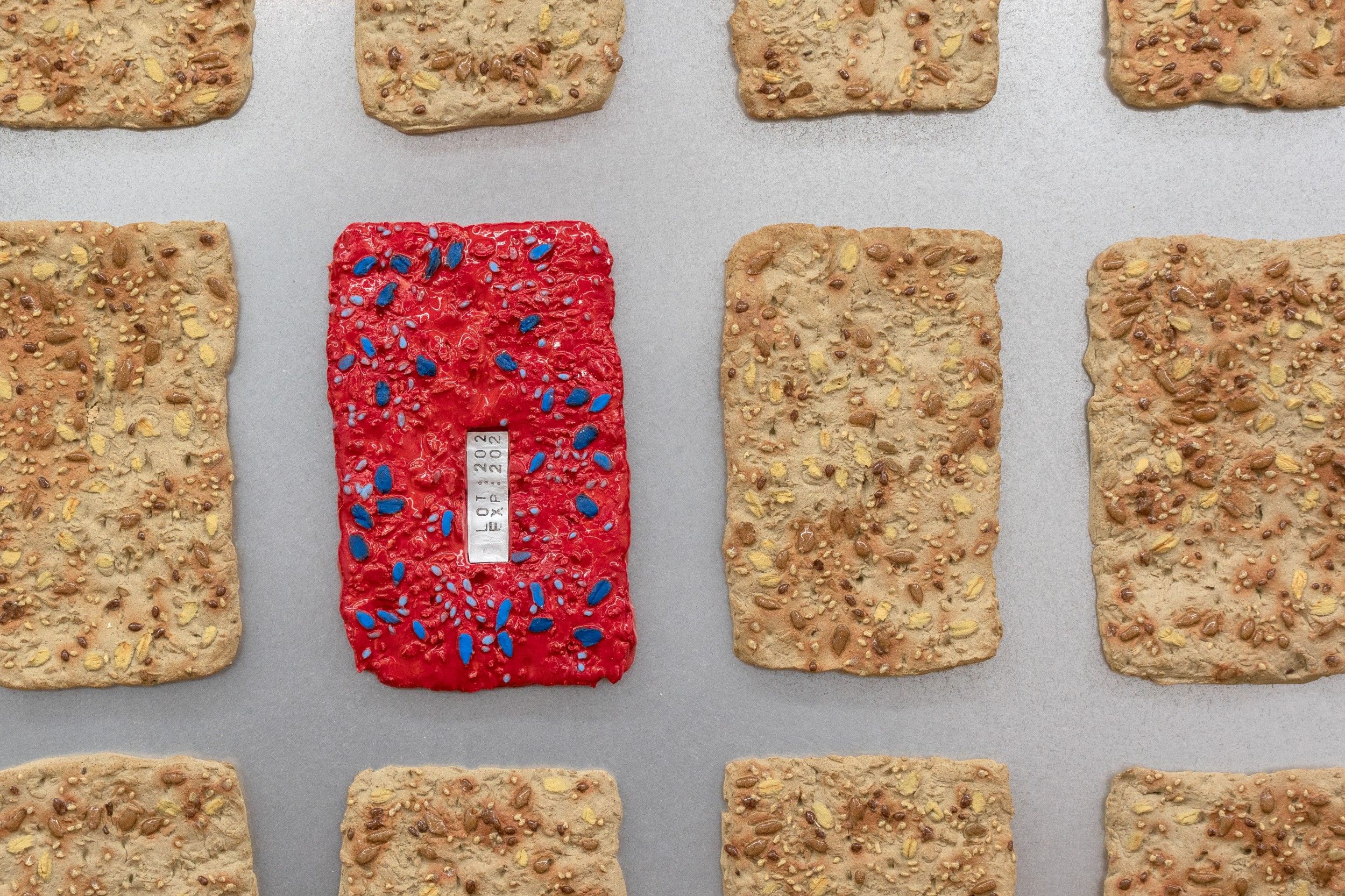 Rafał Zajko, Produkt i (2021) Courtesy of the artist and PUBLIC Gallery

For tens of thousands of years the consumption of wheat has indelibly shaped human civilisation, altering the structure of our settlements, language and bodies. Female skeletons dated to 13,000 BC found in modern day Syria display attrition at their elbows and knees with which they would crush grain kernels against a literal grindstone using the weight of their own bodies. As the author Yuval Noah Harari remarks in Sapiens, ”we did not domesticate wheat, it domesticated us”. Borrowing its title from Amber Waves: The Extraordinary Biography of Wheat by Catherine Zabinski, this show of sculpture and installation work by the London-based Polish artist Rafał Zajko imagines the ubiquitous crop as an alien force to consider the unintentional and cyclical byproducts of modern civilisation.

Reflecting on his family’s history of farming and factory work, as well as PUBLIC’s former life as an East End bakery, Zakjo draws parallels between bodily functions and the stages of mass-scale wheat farming. Ceramic slabs of toast studded with plump glistening seeds and enmeshed with medicine prescription labels are placed besides a breast-shaped bread loaf affixed with a gauzy synthetic nipple. In a structure evoking the process of mechanical distillation, blocks of frozen synthetic urine (Zajko says using real stuff isn't Covid-friendly) melt into droplets, oxidising the copper plates below. Throughout, the geometry and colours evoke the nostalgic futurism of the 70s and 80s. One sculpture—a vacuum-like instrument enclosed in a glass dome—upon activation begins to pollute its own environment with smoke, before suctioning it back out again—a cautionary yet strangely optimistic reminder of the simultaneous destruction and ingenuity we have displayed as a species for millennia.

about 8 hours ago
Anish Kapoor is converting a vast, crumbling Venetian palace into his permanent exhibition space and workshop