Three exhibitions to see in Los Angeles this weekend

The West Coast gallery season opens with its own slate of must see shows, from Tala Madani's scatological depictions of motherhood to Kenny Scharf's jabs at consumerism 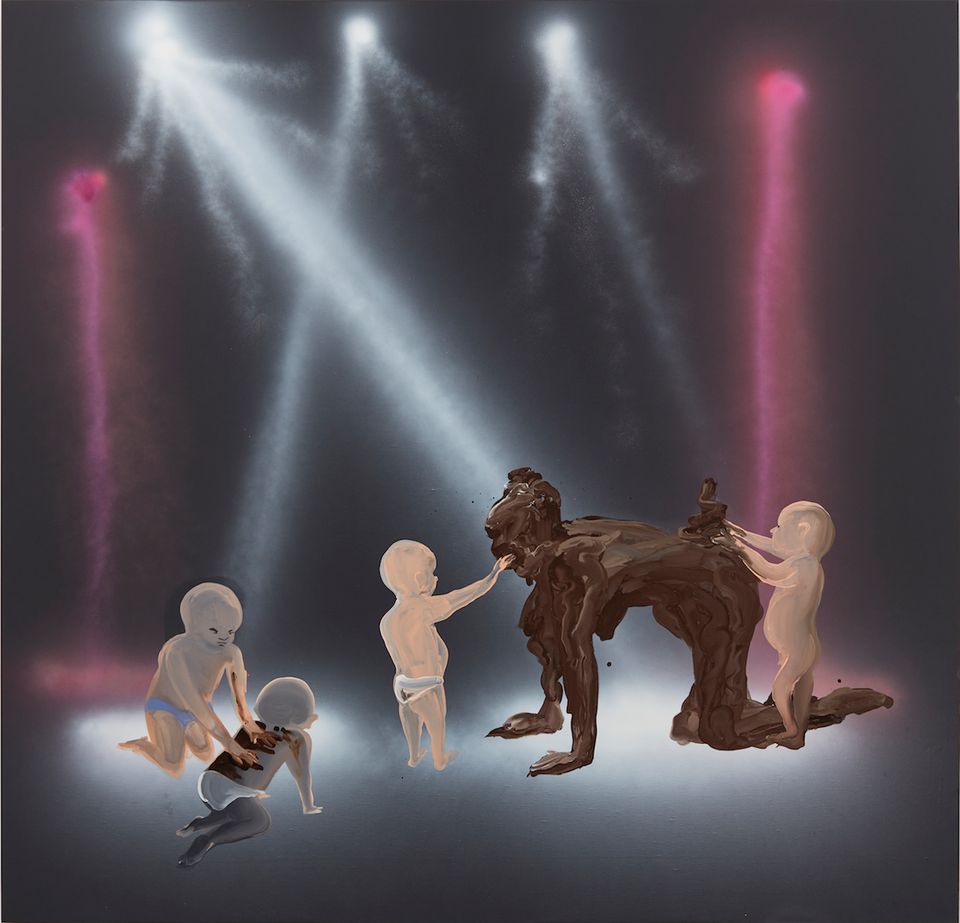 Nearly three years ago, we asked Tala Madani if being a new mother had changed her work. Her response was beautiful and subtle: her baby’s light touch had inspired her to try painting with the lightest brushstroke possible. But the time for subtlety is over. In her new show Shit Moms at David Kordansky Gallery (until 19 October), Madani, who now has two children, has updated the history of motherhood in art with scatological imagery worthy of Paul McCarthy. These moms, painted with a mix of shiny and matte browns, appear to be made of excrement. The babies are shown riding their mothers, hugging them, stomping on them, smearing them, feeding them and being fed by them—all familiar gestures set into relief by the voluminous quantities of shit. The premise is brilliant and so is the painting, which uses the reduced palette and minimal forms of caricature to convey emotions from neediness to joy. The show also features two large diptychs that play on the idea of paintings as video or light projectors, as well as six animations. In Manual Man (2019), one hapless man after another attempting to read furniture assembly manuals becomes the chair he reads about. In The Womb (2019), a growing fetus watches the history of mankind unfold like a YouTube montage that can’t be turned off—not even when the fetus gets its hands on a remote control, which is not unlike how Madani’s own images persist in the imagination.

The lofty entrance gallery at Hauser & Wirth in Los Angeles, carved out of a neoclassical bank building, has had some sublime hangs before. Who could forget the sculptures by Ruth Asawa that inaugurated the space? But Charles Gaines’s first show at the gallery Palm Trees and Other Works (until 5 January 2020) looks particularly powerful and beautiful there. The show weirdly conjures the ghost of financial exchanges past, as his gridded images—this time based on black-and-white photographs of date palms—are generated by a numbering system and mapping methodology that connects art-making to accounting as well as other symbolic systems like language. The paintings on plexiglass both amplify the palm tree photographs they contain and compete with them with vibrant blues and fiery reds making for visually seductive surfaces.

The quality of Kenny Scharf’s work can be hard to judge because he typically favors a garishly colored and ridiculously busy kind of tastelessness. But every show by Scharf at Honor Fraser looks stronger than the last. His latest, Optimistically Melting! (until 16 November) knocks the riotously coloured ball out of the overpopulated playing field. His mix of mediums here is spot-on. His canvases feature hopeful spermatozoal figures amid hints of global danger, and his cartoonish paintings on the backs of old TV sets are powerful harbingers of tech-obsolescence. His assemblages made of plastic kids’ toys from fake phones to assorted cars and trucks—including a massive “garland” hanging outside, over the gallery façade—offer monuments to wastefulness. Still, for Scharf, taking jabs at consumerism never eclipses the sheer joy of making or remaking things. This outsized sense of fun drives his newest type of work: huge ceramic pots made in collaboration with artist Stan Edmondson, which have goofy faces and plants sprouting from them unkempt hair. These works are instantly likeable. As William Blake said: “Exuberance is beauty.”