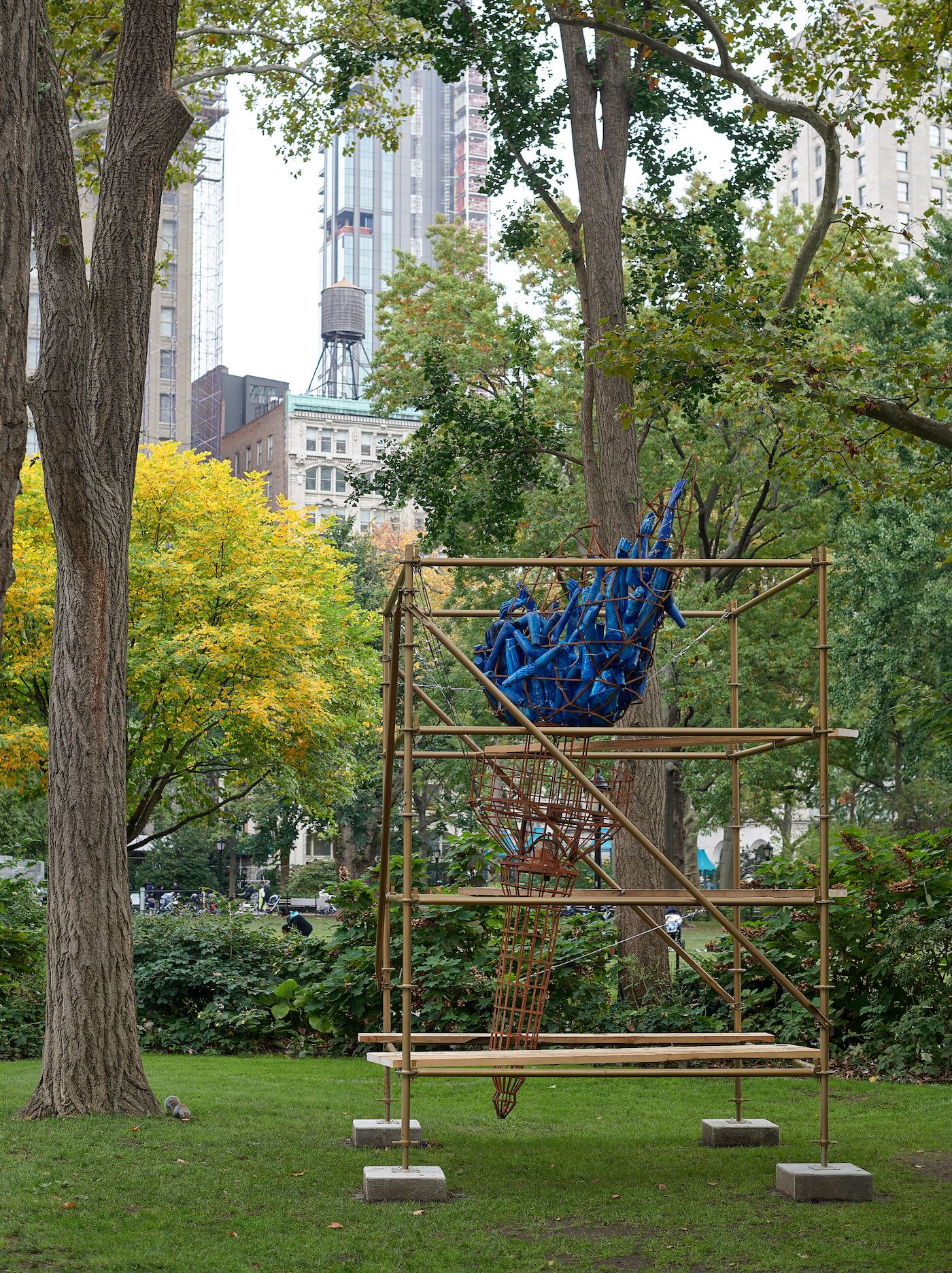 Ahead of the presidential election next week, the US artist Abigail DeVille has reimagined the Statue of Liberty’s torch with a 13 ft-tall sculpture titled Light of Freedom—a nod not only to the current political climate but also on the fraught history of the first enslaved Africans who were brought to America's shores. As racial tensions reach a fever pitch, the work evokes the stark contrast between the statue’s promise of democracy and liberty and the racism and xenophobia that remains rampant in the US. DeVille, whose work focuses on race relations, untold histories and gentrification, encased her torch in scaffolding to symbolise the freedom stolen from enslaved people. “The first Blacks to be brought to New York City were eleven Angolans in 1626, [making] people of African descent the second-oldest group of settlers, [but] unfortunately history has erased the contributions and victories of this group,” DeVille says. “I wanted to make something that could honour their lives and question what it means to be a New Yorker in the past, present and future.” Commissioned by the Madison Square Park Conservancy, the project is installed in Manhattan's Madison Square Park where, from 1876 to 1882, the actual Statue of Liberty's torch-holding arm was on view before the rest of the sculpture arrived from France. 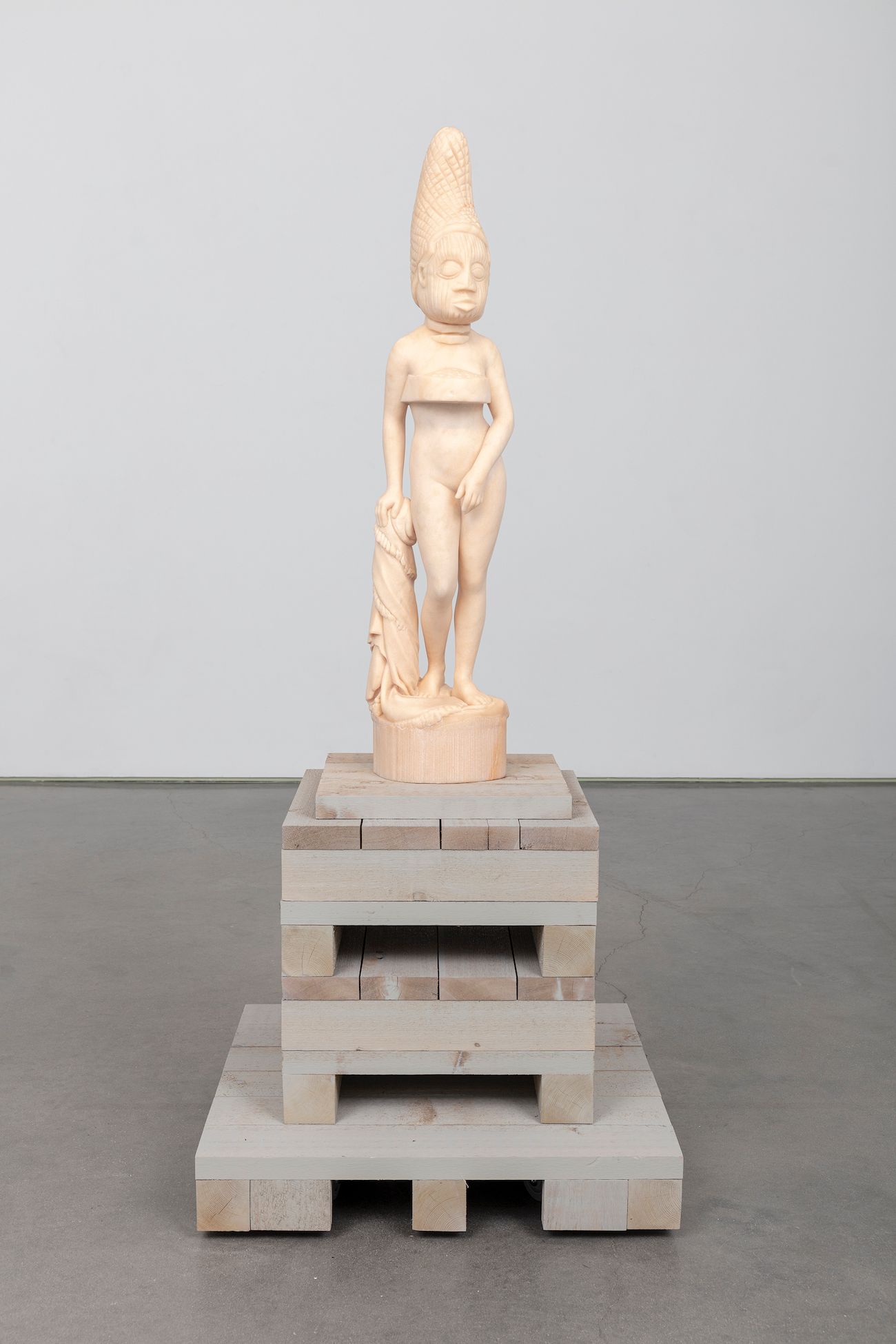 The Harlem-based artist Sanford Biggers considers the often misunderstood cultural aesthetics of Classical and Hellenistic sculpture in the exhibition Soft Truths at Marianne Boesky (until 12 December). A new series of marble sculptures, titled Chimeras, combine elements of African and ancient Greco-Roman sculpture to reference historical revisionism, or how European nationalism influenced an aesthetic standard in the 20th century. Biggers was inspired by recent scholarship revealing that the milky-white Classical sculptures we are accustomed to seeing were once polychromatic as well as by the long history of colonial appropriation and collection of African artworks. The show also includes paintings and sculptural works made from antique quilts, which is the focus of the artist’s retrospective currently on view at the Bronx Museum of the Arts, titled Codeswitch. The quilts represent the codex of hidden maps and messages that led enslaved Black people to free states, creating "a transgenerational conversation chronicling aspects of America”, Biggers told The Art Newspaper. 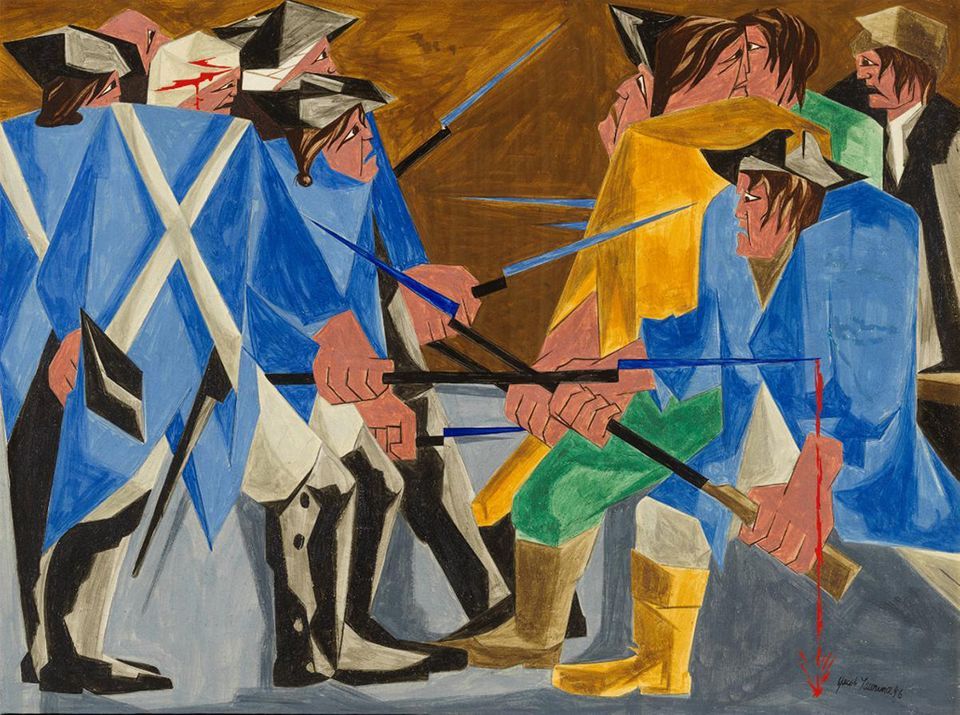 Jacob Lawrence's recently rediscovered panel from the series Struggle: From the History of the American People is titled There are combustibles in every State, which a spark might set fire to.—Washington, 26 December 1786 (1956) © The Jacob and Gwendolyn Knight Lawrence Foundation, Seattle/Artists Rights Society (ARS) New York. Photo: Anna-Marie Kellen

It is the last weekend to see Jacob Lawrence: the American Struggle at the Metropolitan Museum of Art (until 1 November), which recently led to the recovery of additional panel from the series that had been lost for decades. The show presents several panels from the artist's seminal series Struggle: From the History of the American People (1954-56)—a work comprising 30 tempera paintings that depict watershed moments in the US, from the arrival European colonists and African slaves to the First World War. Produced during the height of the Civil Rights movement, the series underscores Lawrence’s focus on social and racial injustices, and represents the “struggles of a people to create a nation”, the late artist once said. Against, the Lawrence's wishes, the series was divided up in 1959, ultimately causing some to go missing. The presentation of the 23 remaining panels in this show included blank placeholders for the missing panels. Sylvia Yount, the curator in charge of the museum's American wing who co-organised the show, told The Art Newspaper that it was “our fervent hope that the missing panels would somehow resurface during the run of [the show] in New York, the city where Lawrence spent most of his life and where the series was last seen publicly”.