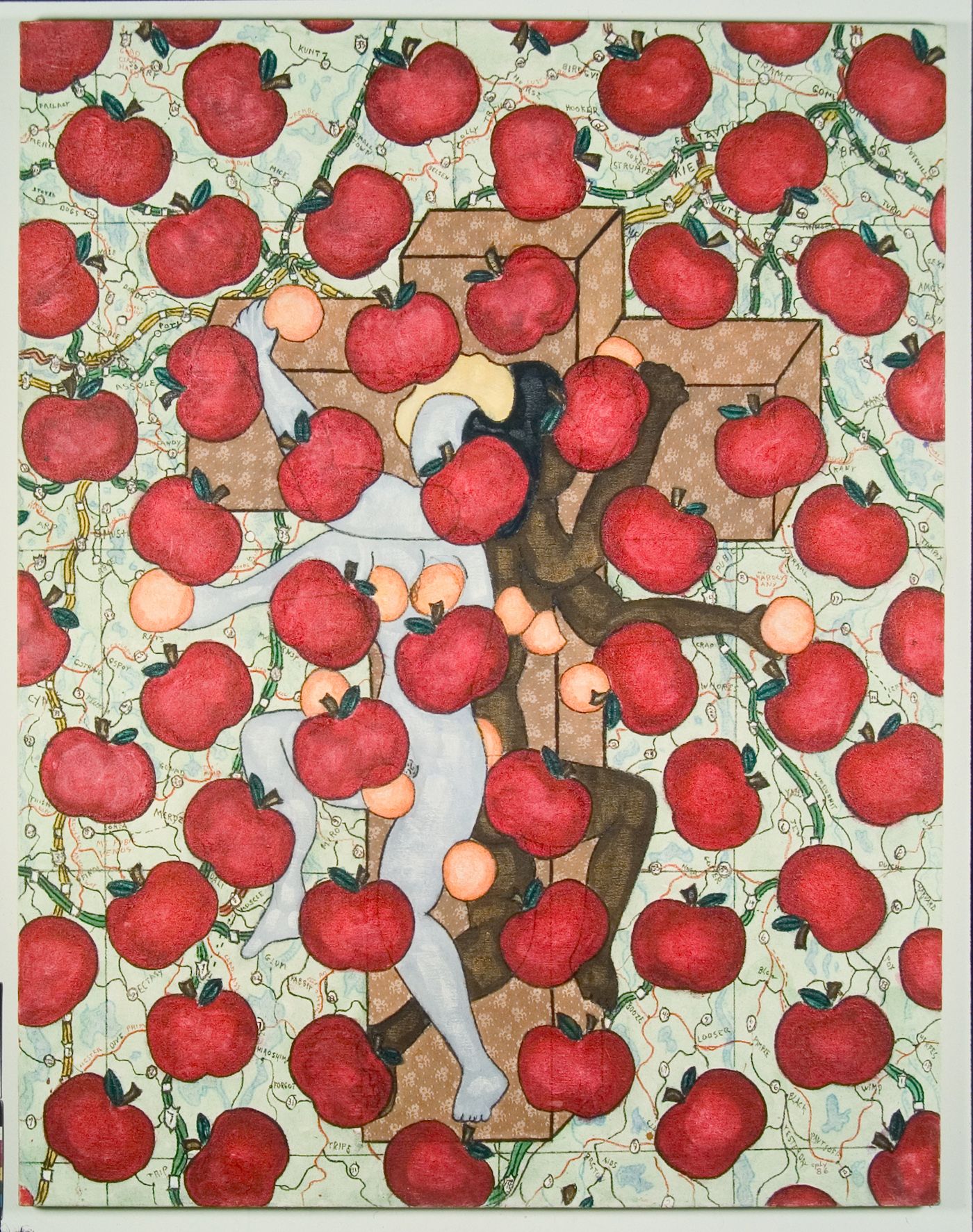 William Copley: the New York Years at Kasmin in New York features work from the era following the American Surrealist’s return to the city in 1963 after more than a decade as an expatriate in Paris. The paintings are full of American pathos: their content is said to spring from Copley’s repressive American childhood, and such an observation requires little digging for evidence. His humorous broaching of sexuality, religion and consumerism are delightfully ham-fisted, with a willingness to ladle muffled imagery out of the American subconscious and onto the canvas. In Untitled (Apples & Oranges) (1986), Copley paints two nudes dancing before a massive cross and a waterfall of flatly rendered apples and oranges cascading in the painting’s foreground while what appears to be a road map makes up the composition’s background. European Surrealism and American Pop are thrown together here with Copley’s absurdist humour on full tilt. Such works never rely on irony or punchlines to succeed, though; they are simply earnest paintings, keen enough to know that to deny humour is to deny reality.

The Tate Modern in London reopened this week with a major survey devoted to the Pop artist Andy Warhol (until 25 November). The retrospective, which was closed in mid-March in response to the coronavirus pandemic, features some of the artist’s best-known pieces, including Green Coca-Cola Bottles (1962) and the Screen Tests series (1964-66). The Ladies and Gentlemen series (1975) depicting African-American and Latinx transgender women is a major draw. The paintings were commissioned in 1974 by Warhol’s Italian dealer Luciano Anselmo, who asked the artist to depict “funny looking” drag queens. Warhol subsequently asked the writer and photographer Bob Colacello to find sitters, offering a $50 fee to each model. Colacello discovered prospective candidates in New York’s Gilded Grape club off Times Square, a magnet for members of the trans community. A selection of Warhol’s wigs, which he probably glued to his head, are another eye-opening addition.

The Studio Museum in Harlem has organised the first online edition of its annual photography exhibition Expanding the Walls, which since 2001 has showcased the work of teenage students in New York City who completed an eight-month residency aimed at developing their artistic practice. While the programme typically offers a deep dive into darkroom techniques as well as a series of workshops and opportunities for students to engage with various contemporary artists, gallerists and other mentors, this year the Covid-19 pandemic presented an unprecedented set of challenges, forcing the students to complete their residencies from home. The images featured in the show Hearts in Isolation: Expanding the Walls, which were partly produced during this period of confinement in New York, poignantly capture the zeitgeist of the moment, from the bleak mood of the city during the months-long lockdown to idyllic moments at home that were afforded by the pandemic's slowdown.