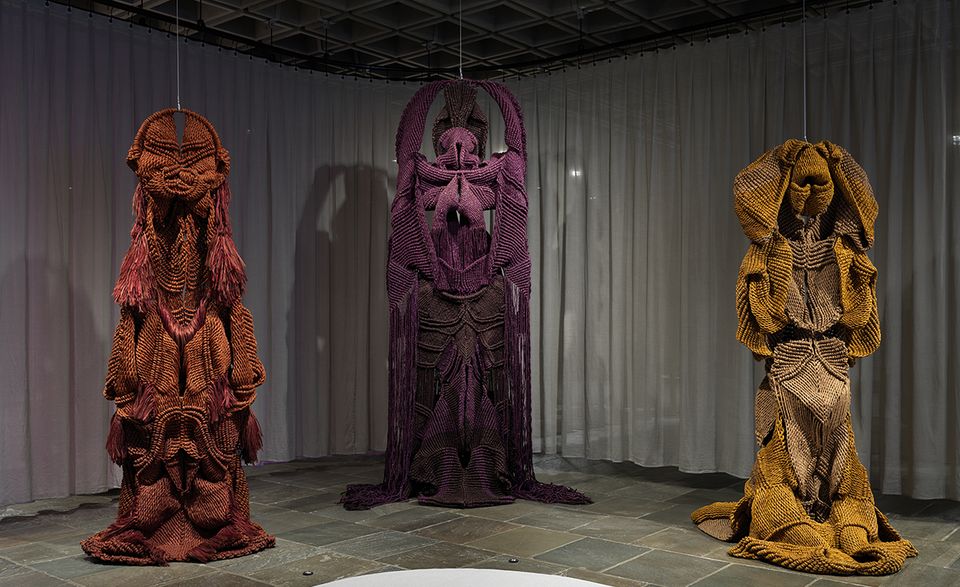 When you visit Phenomenal Nature: Mrinalini Mukherjee (until 29 September) at the Met Breuer, you will wonder why this is the first time the sculptor, who died in 2015 and was part of a generation of post-Independence Indian artists, has been given a major US career survey. You will also be astounded to know that Mukherjee, who initially trained as a painter, never did preparatory drawings for her sculptures. She made her fibre works with a labour-intensive knotting process, adding ceramic to her practice in the mid-1990s and then bronze. She was told that the lost-wax casting process would not allow for the details she wanted, says the show’s curator, Shanay Jhaveri, so she finished them with orthodontic tools. Mukerhjee's sensual works in organic forms that vary in abstraction and figuration, seem to play with positive and negative space and have a sexual charge with their phallic shapes and vulvar openings. They sometimes reference classical Indian sculpture, like the Night Bloom series in ceramic (1999-2000), which resemble seated women or goddesses, while many of the fibre works have blooming, symmetrical yonic forms. The large gallery has been divided by curves of drapery, with soft cream-coloured carpeting quieting the stone floors, giving a reverential hush to the show.

At Salon 94, works by three female artists, Natalie Frank, Amy Bessone and Francesca DiMattio, reveal a feminine identity in flux. Paint, Porcelain and Pulp (until 9 August) takes as its starting point the way the artists manipulate their chosen medium to startling effect, but what ultimately comes to the fore is the malleability of gender. Bessone abstracts her figures with symbolic and geometric shapes, creating vivid paintings of women with uncanny, mask-like faces. Meanwhile, Frank’s gestural narrative drawings of women, often set in domestic scenes, border on the surreal with their outsized and sometimes ghoulish features. Colourful and bulbous porcelain works by DiMattio combine animal and human, classical and kitsch, masculine and feminine.

New kid on the Chelsea block, the Poster House, opened this week. The first US museum dedicated to historic and contemporary posters, the inaugural exhibition is a deep-dive into the work of one of the most famous poster designers in history—the Czech artist and graphic designer Alphonse Mucha. Art Nouveau / Nouvelle Femme (until 6 October) looks at how he took the Paris scene by storm with his designs, starting when he met his muse Sarah Bernhardt, the most famous actress of her day. One section of the show focuses on the striking, empowering posters he made of her, which launched his graphic design career. Working with her began a fascination for Mucha in depicting strong female characters in a way that the 19th-century European public had not seen before—not simply as passive and coquettish figures but as powerful and dynamic women.