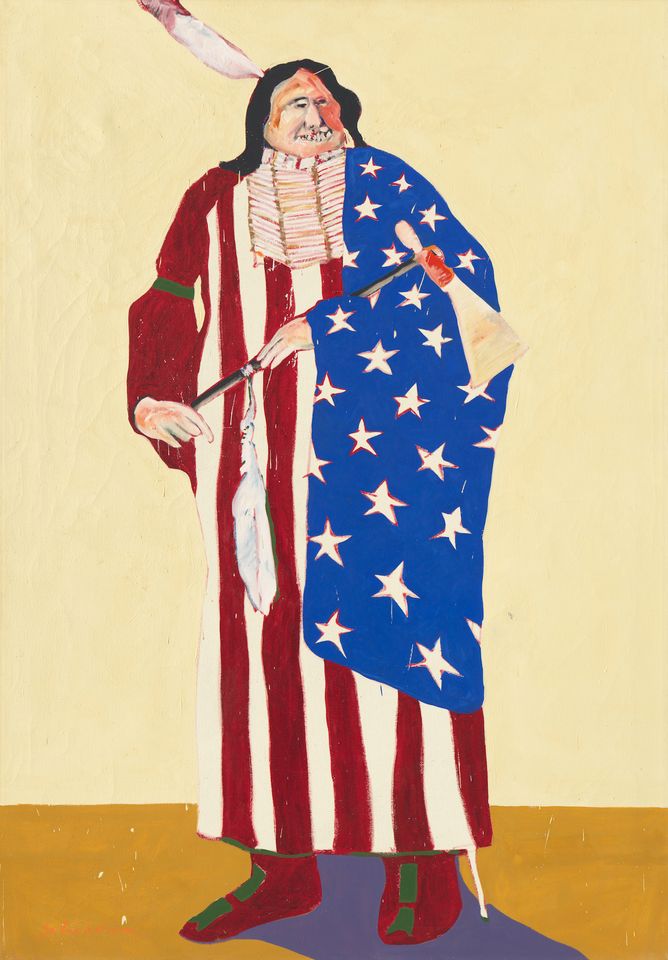 Stretching the Canvas: Eight Decades of Native Painting at the National Museum of the American Indian (until autumn 2021) presents nearly 40 paintings by Native American artists who subverted market-driven restrictions on the aesthetic of indigenous art. The show is organised chronologically and traces the emergence of formal arts curriculums devoted to Native American arts in the early 1930s in New Mexico—which then reinforced so-called traditional styles and subjects, typically rendered in a flat, illustrative manner—to the assimilation of Native American art with Abstract Expressionism and other avant-garde movements in the 1940s. The show features monumental compositions (all drawn from the museum’s permanent collection, of which around 2% is devoted to modern and contemporary art) by 30 artists, including several pieces by Fritz Scholder, Jaune Quick-to-See Smith and Kay WalkingStick. Similar shows of contemporary art could be on the horizon for the museum. “We still have a modest collecting budget—around $100,000 or so,” says the associate director, David Penney. “But all of that budget is now going toward contemporary art.”

2020 Vision: Photographs, 1840s-1860s at the Metropolitan Museum of Art (until 10 May) focuses on the budding years of the medium, bringing together around 50 works that range from candid portraiture and photojournalism to landscape and travel photography. The show includes some pieces from a major promised gift announced this month of more than 700 rare American photographs and albums from the private collection of William Schaeffer, a New York-based specialist of 19th-century photographs. The donors, the Met trustee Philip Maritz and Jennifer Maritz, promised the gift to mark the museum’s 150th anniversary. The collection includes daguerreotypes, salted paper prints, ambrotypes, tintypes, albumen silver prints, cyanotypes, platinum prints and gelatin silver prints; some depict pioneer-era America while others appear radically conceptual for their time. From July of this year to January 2021, the museum will host a follow-up exhibition of photographs from the 1940s to 1960s.

Zilia Sánchez: Soy Isla (I Am an Island) at El Museo del Barrio (until 22 March) is the Havana-born artist’s first museum retrospective and traces seven decades of her largely overlooked career. Sánchez is best known for her abstract shaped canvases, which she refers to as topologias (topologies). Her practice “reflects a wider tradition of artists who experimented with the shaped canvas, including earlier Argentine group Madi, [as well as] various US Minimalist artists, such as the artist Lee Bontecou and her fellow Cuban compatriot Carmen Herrera”, says Susanna Temkin, who organised the retrospective with Vesela Sretenović, the senior curator of the Phillips Collection, where the exhibition was first held last year. The artist’s organic, sensual forms, which are rendered in white or tones of blue, “expand beyond the wall and seem to evoke the contours of landscape and body”, adds Temkin. The titular reference to islands serves as a metaphor for Sánchez’s life as an islander—literally as a resident of Cuba, New York, and Puerto Rico, and figuratively as a lone figure working apart from the mainstream art world. It’s also the last week to see Sánchez’s exhibition Eros at Galerie Lelong (until 17 January), which focuses on new and recent works.