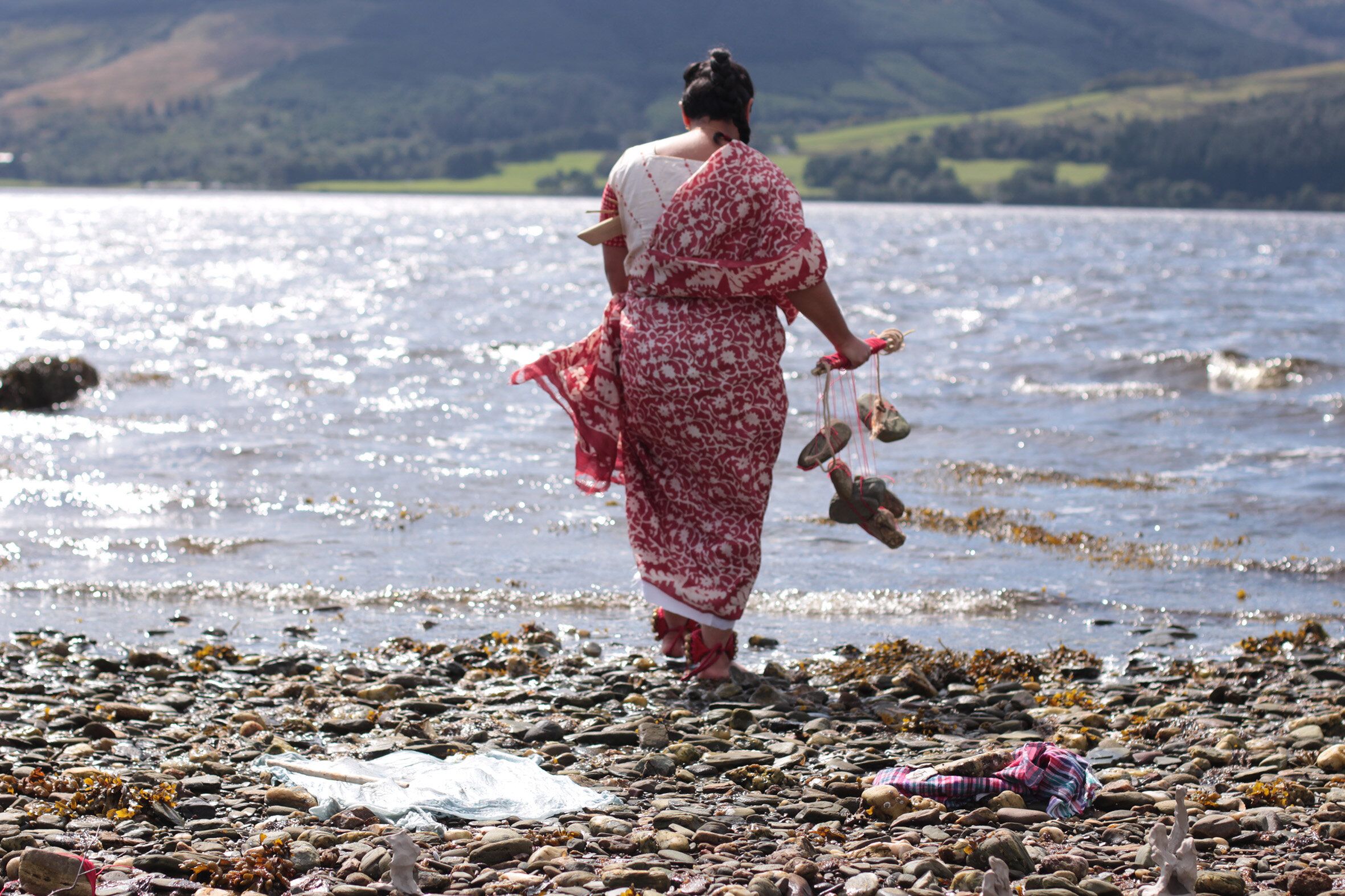 Still from নীল. Nil. Nargis. Blue. Bring in the tide with your moon... (2019), by Raisa Kabir Image courtesy of the artist and indigo + madder

নীল. Nil. Nargis. Blue. Bring in the tide with your moon… (until 26 September), a solo show of work by the artist and weaver Raisa Kabir at indigo + madder, takes its name from a 2019 video (first shown at the 2020 India Art Fair in New Delhi), in which Kabir stands in the Scottish sea amid submerged nuclear warheads, weaving linen stained with Bengali indigo dye. Showing new works spun from indigenous Mexican thread, while also making reference to the Caribbean cotton trade and the history of violence surrounding indigo farming in British India, Kabir imbricates histories and colonialisms, placing them within a wider globalised network of production, consumption and violence. In recent years, much attention has been drawn to textiles as an ancient medium with a complicated history of marginalisation. Enmeshing traditional fabrics with plastic and industrial rope, or even presenting work in seemingly "unwoven" states, Kabir exposes the fraught narratives of these materials and the systems of labour which produce them. "To disrupt functional weaving is to create a tangle”, Kabir says. Knotted and complex, these transcontinental textiles call on us to investigate our interwoven pasts and the ties that continue to bind us together.

The group show Eigenheim (until 13 September) at Soft Opening—the first in the gallery’s new and expanded Bethnal Green space—brings together 12 artists who reflect on the German word for “privately owned home”, a concept whose meaning has undoubtedly shifted for many after months collectively trapped inside. Carlos Reyes’s take on “eigenheim” sees bright red eggs placed inside two stacks of translucent egg boxes, which form two tiny towers whose inhabitants are simultaneously totally insulated and exposed. The effects of extended isolation on our mental states are also examined in a 2020 series of six eerie egg-on-tempera dreamscapes by Stephen Polatch—in which anthropomorphic bell-chiming birds stroll on beaches in front of swirling starry backdrops. Theodora Allen’s painting Monument, No. 1 (2018) shows psychotropic plants that form an inviting portal to the viewer, promising both hedonistic escape and confrontation with the deepest, darkest recesses of our mind—apt for a world now brought to its knees by unexpected natural forces.

A Countervailing Theory (until 21 January 2021) is an epic cycle of 40 monochromatic drawings commissioned for the Barbican's Curve Gallery (until 24 January 2021) by the US-Nigerian artist Toyin Ojih Odutola, which immerses us in an imaginary “pre-historic” civilisation ruled by muscular warrior women and served by naked male humanoids. Cinematic storyboarding and graphic novels, as well as the grandest of old masterly figure compositions, are among the influences that feed into Ojih Odutola’s scenarios, all executed with virtuoso technique in charcoal, white chalk and pastel on black backgrounds. Offering a series of porous, nuanced propositions, the show's speculative depiction of a queer, Black, female-dominated society comprehensively flips historical hierarchies and power structures. Yet at the same time this world is brutally oppressive, based on subjugation and presided over by a dictatorial ruling class. Throughout we are repeatedly reminded of the way in which stories are created to support different viewpoints and that too much power inevitably corrupts whoever wields it.