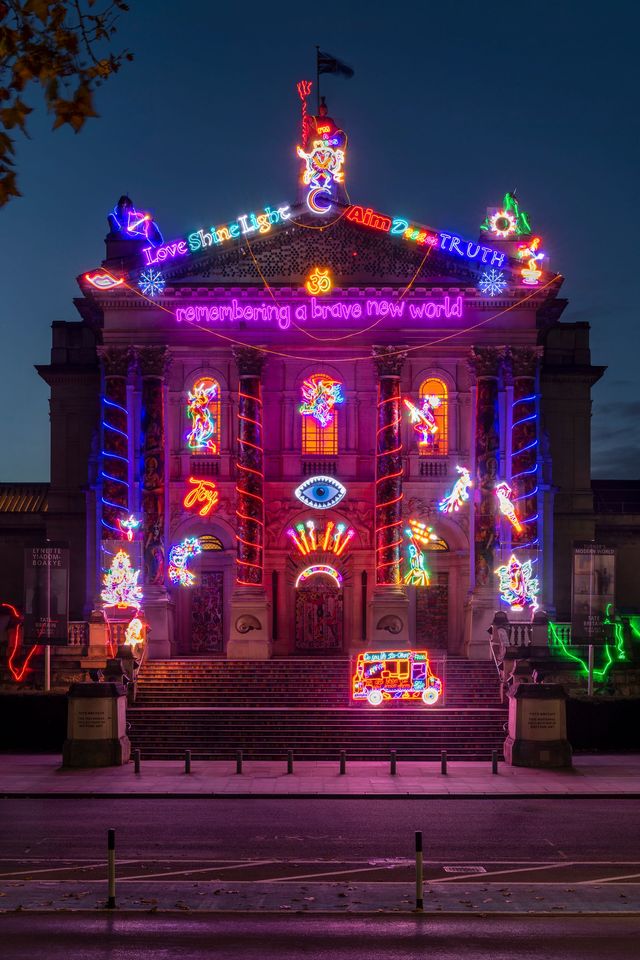 Chila Kumari Singh Burman's Tate Winter Commission is hard to miss. Bollywood bling meets Pop art, with lashings of colour, glitter and a defiant refusal to be constrained, it covers Tate Britain's exterior in an abundance of neon signs, photomontage, lurid paintings and etchings, all drawing on kaleidoscopic references, from Indian mythology to George Orwell and the cornets sold out of Burman's father’s ice-cream van. "My idea is to disrupt the Neoclassical façade and mash it all up—it’s my take on the world as it is, defacing and refacing and putting chaos into order," Burman says in an interview with The Art Newspaper.

Coinciding with the Hindu festival of lights Diwali, the installation transforms the building's central pillars to resemble Indian firework packaging and also includes a figure of a Bollywood actress with a raised fist that Burman once put on the cover of Mukti, a magazine for South Asian women that she founded in the 1980s. "A great many artists outside the dominant culture—and especially diaspora artists in Britain—are still missing from major art collections," she says. "That’s why me at Tate Britain is so fabulous." 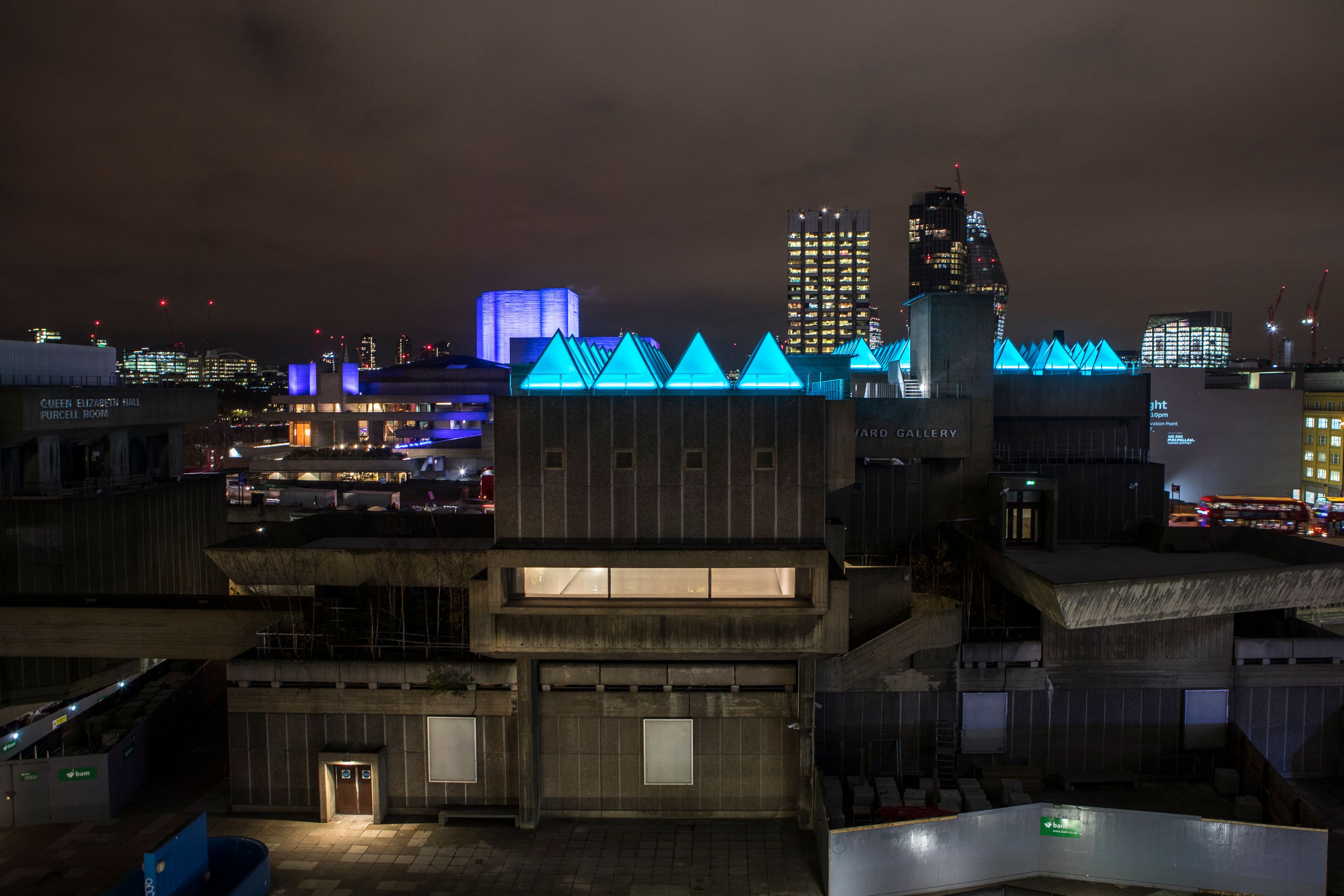 Lighting up the Southbank Centre for the dark days and nights to come, this series of 17 works stages artistic interventions which open up the hitherto shuttered Brutalist site. The Royal Festival Hall now becomes a giant screen for video projections such as Emma Talbot’s Birds, Freedom (2020), in which an animated female figure navigates a vibrant landscape. Meanwhile David Batchelor’s Sixty Minute Spectrum (2018) turns the Hayward Gallery’s roof into a giant chromatic clock, flooding its pyramid skylights with changing colours that move through the entire visual spectrum over 60 minutes. While on the river level, Tatsuo Miyajima’s monumental LCD lightbox Counter Void S-I (2003) presents another form of timepiece as it cycles through a numerical countdown. Chiming with what the curator Cedar Lewisohn describes as the exhibition’s “simple underlying idea of spirituality and light", the author Jini Reddy has also been commissioned to write five new pieces of text on the theme of seasonal “light, darkness, nature and spirituality”, which will be displayed across the Southbank. 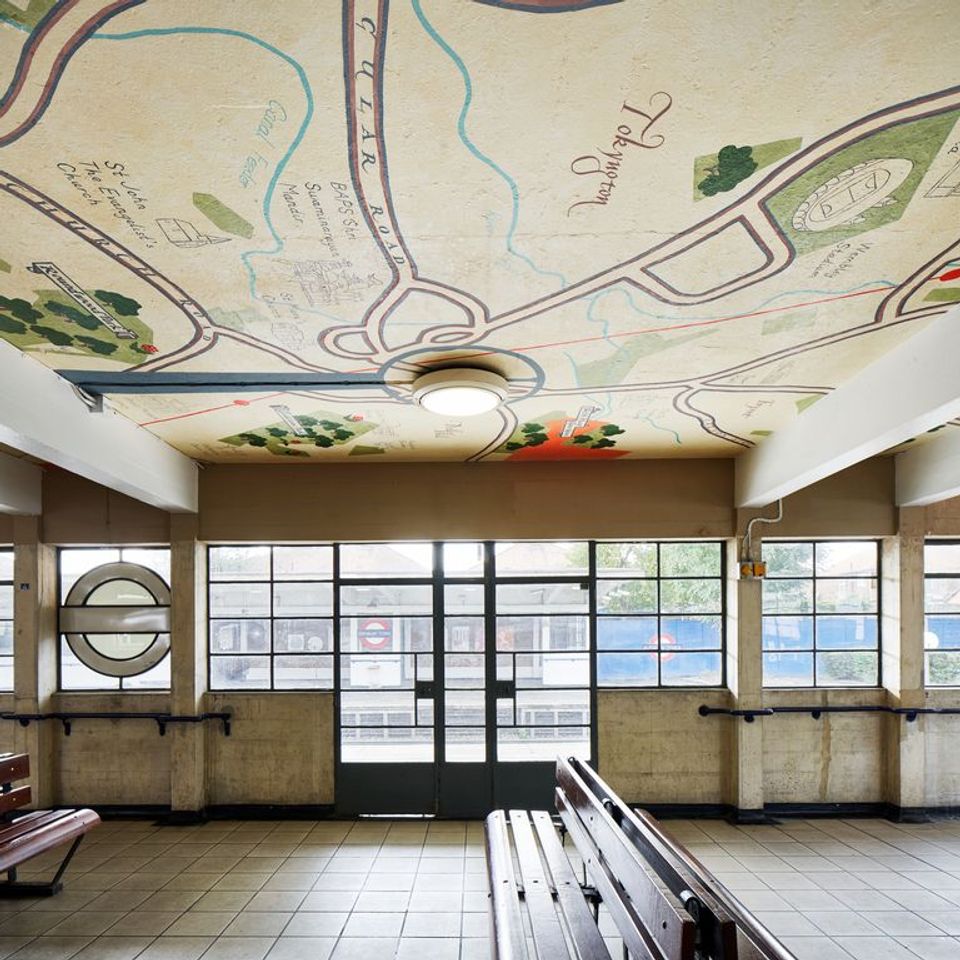 The latest artistic intervention on the London underground sees Sudbury Town tube station, located in the north-west borough of Brent, offered up as a canvas for the Glasgow-born artist Lucy McKenzie. Most prominent are two permanent painted ceiling frescoes, which detail historic maps showing local landmarks of past and present. Part of the public commissioning project Art on the Underground, which this year also sees Phyllida Barlow and Elisabeth Wild produce commissions, Pleasure's Inaccuracies is inspired by McKenzie's interest in local histories and the aesthetics of the past and makes frequent reference to elements of the station's original 1931 design by the architect Charles Holden, who also designed the University College of London's Senate House. A highly detailed miniature model of the station building will also be displayed permanently, inviting commuters to reconsider a space often passed through in a rush. "With the childish appeal of tiny scale models and a kind of ‘treasure hunt’ to locate each artwork I hope to draw the viewer in,” McKenzie says.