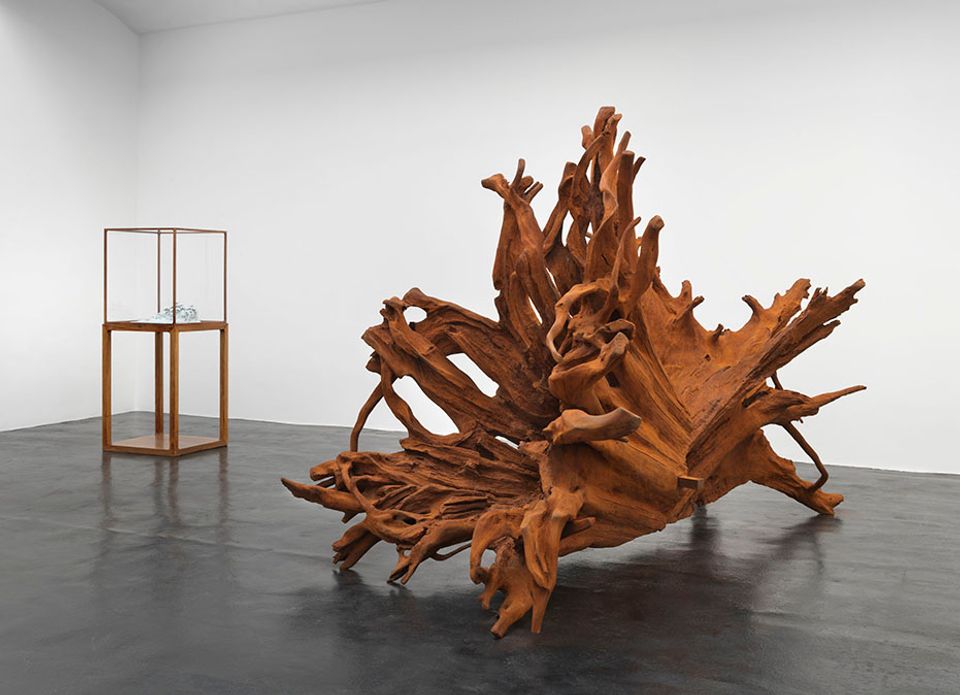 Being uprooted is something Ai Weiwei knows about. Exiled to the Gobi Desert as a child because of his father’s work, he now lives in exile once more, this time because of his own work. For Roots at neugerriemschneider (until 19 October; free), Ai is showing new monumental iron sculptures which he had cast from long-dead pequi trees—an endangered species from the rainforests of Bahia in Brazil. The original stumps and roots were first fused into wooden sculptures, their molds then shipped to China to create iron castings with a rough bark texture in corroded tints of brown and orange. The shapes are intriguing—one resembles a dinosaur, another a vast bird with spread wings. Roots makes a strong point about environmental devastation, though it would perhaps be better not to examine its own carbon footprint too carefully. The show, which also features Ai’s porcelain sculptures created at the former imperial factory in Jingdezhen, is a collaboration with the Lisson Gallery in London where the works will show next month.

Displaying your work alongside that of Pablo Picasso, as Thomas Scheibitz is doing in Pablo Picasso x Thomas Scheibitz at Museum Berggruen (until 2 Feburary 2020; tickets €12, concessions available), seems like a courageous move for a contemporary painter. It makes more sense when you know Scheibitz is an artist who seldom works from nature, but from existing images in art, advertising or photography. This exhibition then is not about comparing the way two artists observe life; rather it is about how Scheibitz has absorbed Picasso’s images and developed them. The result is a rich insight into the history of painting and sculpture since Picasso. On occasion, Scheibitz’s work seems to reference Picasso’s directly, like in his 2004 painting, Hand, which is displayed alongside Picasso’s Dora Maar With Green Fingernails (1936). A 1997-1998 painting, Cubist Figure, is perhaps the clearest expression of the debt he owes to Picasso, though the artist’s presence is tangible in colours and form throughout Scheibitz’s work. Speaking of the challenges producing a show in conversation with the iconic painter, Scheibitz says it was “a great honour” to be asked, but that “you do need to know what you are doing.”

Since 2015 the vast, abandoned East German House of Statistics on Alexanderplatz has been taken over by artists and renamed Allesandersplatz (Everything Different Square.) It’s a welcome throwback to 1990s Berlin, when hundreds of makeshift, creative wonders sprung up in derelict buildings around the city. It is now a rarity amid gentrification and rising rents. The artists’ occupation prevented the planned demolition and sale of the property to a private investor in 2015. The state of Berlin purchased it from the federal government in 2017 and has agreed to turn it into a centre for art, education, affordable living space and local administrative offices. During Berlin Art Week (until 15 September) it is open to the public—and the glassless windows, piles of rubble and overgrown courtyard will leave anyone who has known Berlin for long with a sense of nostalgia. On one dark decaying corridor, a bee colony equipped with sensors is producing data for a cryptocurrency called Beecoin. The building is one of the centres of Berlin Art Week with an array of workshops and conferences. Ruangrupa, the art collective charged with curating the next Documenta, will give a presentation there on 15 September.

about 6 hours ago
NFTs and the 'Art' world: panic and possibility