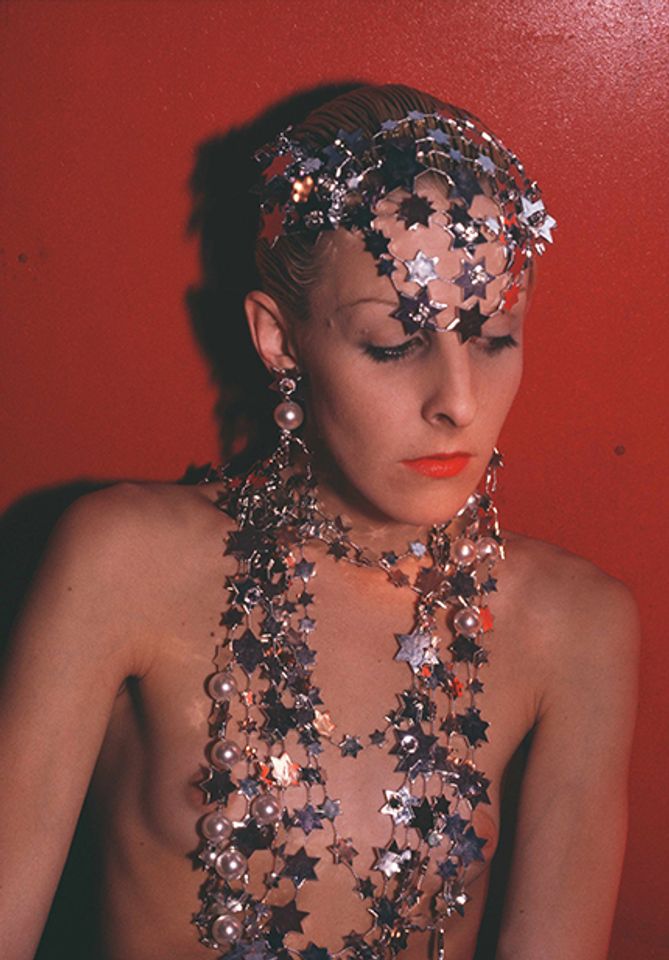 The late Roy Oxlade’s canvases, like those of his wife Rose Wylie, were out of step with various movements in painting throughout his lifetime. But since his death in 2014, his work is rightly being re-examined and, as the show at Alison Jacques Gallery (until 11 January; free) proves, it seems more in tune with younger painters today than those artists who were were far more prominent in his lifetime, like the School of London and the Neo-Expressionists. Emblematic of the informal quirkiness of his work is the painting Potato, Rose (around 1982), in which the silhouette of a potato hovers over a loosely blocked-in figure of Wylie, against a background charged with vivid colour and energetic painterly gesture. Oxlade admired Philip Guston, and there is a similar delight in the everyday stuff around him at home and in the studio—saucepans, scissors, dishes and lightbulbs. But while Oxlade’s paintings harness Guston’s pronounced absurdity, they far from ape the American’s style: the colours are broader, the language more diffuse and varied, the compositions less graphic, often teetering on the brink of chaos. These paintings, and Oxlade’s similarly spontaneous and vigorous drawings, were done between the 1980s and 2006. But with their enthralling freshness, they could have been made yesterday.

Before the internet, YouTube and Instagram, there was Nam June Paik. The Korean artist, who died in 2006 aged 74, is considered the godfather of video art, coining the term “Electronic Super Highway” in the 1970s before the World Wide Web dominated our everyday lives. Tate Modern’s sprawling retrospective (until 9 February 2020; £13) brings together more than 200 works, including the mesmerising piece TV Garden (1974-77), an array of flickering TVs buried in shrubbery, and Nixon (1965-2002), which comprises two monitors fitted with magnetic coils that distort the features of the disgraced former president Richard Nixon. There is more to the show though than electronic wizardry; a section on the artist’s close relationship with the late cellist Charlotte Moorman highlights the depth of this innovative partnership via Nam’s extraordinary props such as TV Bra for Living Sculpture (1969). The dazzling finale, Sistine Chapel (1993), is a large-scale installation made up of of 40 video projectors beaming overlapping images of graphics and famous figures such as the rock star Janis Joplin. Last shown in the German pavilion at the 1993 Venice Biennale, this “video chapel” spins heads and ruptures retinas

It has been 17 years since Nan Goldin has had a UK show. In that time, Goldin's high profile opioid addiction and subsequent activism has received so much media attention, one almost forgets quite how good of an artist she is. Sirens at Marian Goodman (until 11 January; free) shows moving, personal works: new films and photography alongside digital slideshows from past and present. We are immersed in Goldin's usual milieu of New York outcasts—artistic, nocturnal creatures living on the peripheries of mainstream society. Goldin pays tribute to her trans friends in The Other Side (1994- 2019), and in a new video work Sirens (2019), uses found footage with a new score by composer Mica Levi to entrance the viewer into the experience of being high. The most intimate work, Memory Lost (2019) is also the hardest to view. Rotating through images from her addiction years, it shows pills spilled on a carpet, empty bottles, a wrist split wide open, friends and lovers, many who have been lost to substance abuse. It is deeply sad but also warm (Goldin portrays each of her subjects with wonderful empathy). Its blurring passages mimic the hazy, fluid way in which we remember and forget.