Book shows that John Nash was a remarkable artist overshadowed by his elder sibling, Paul 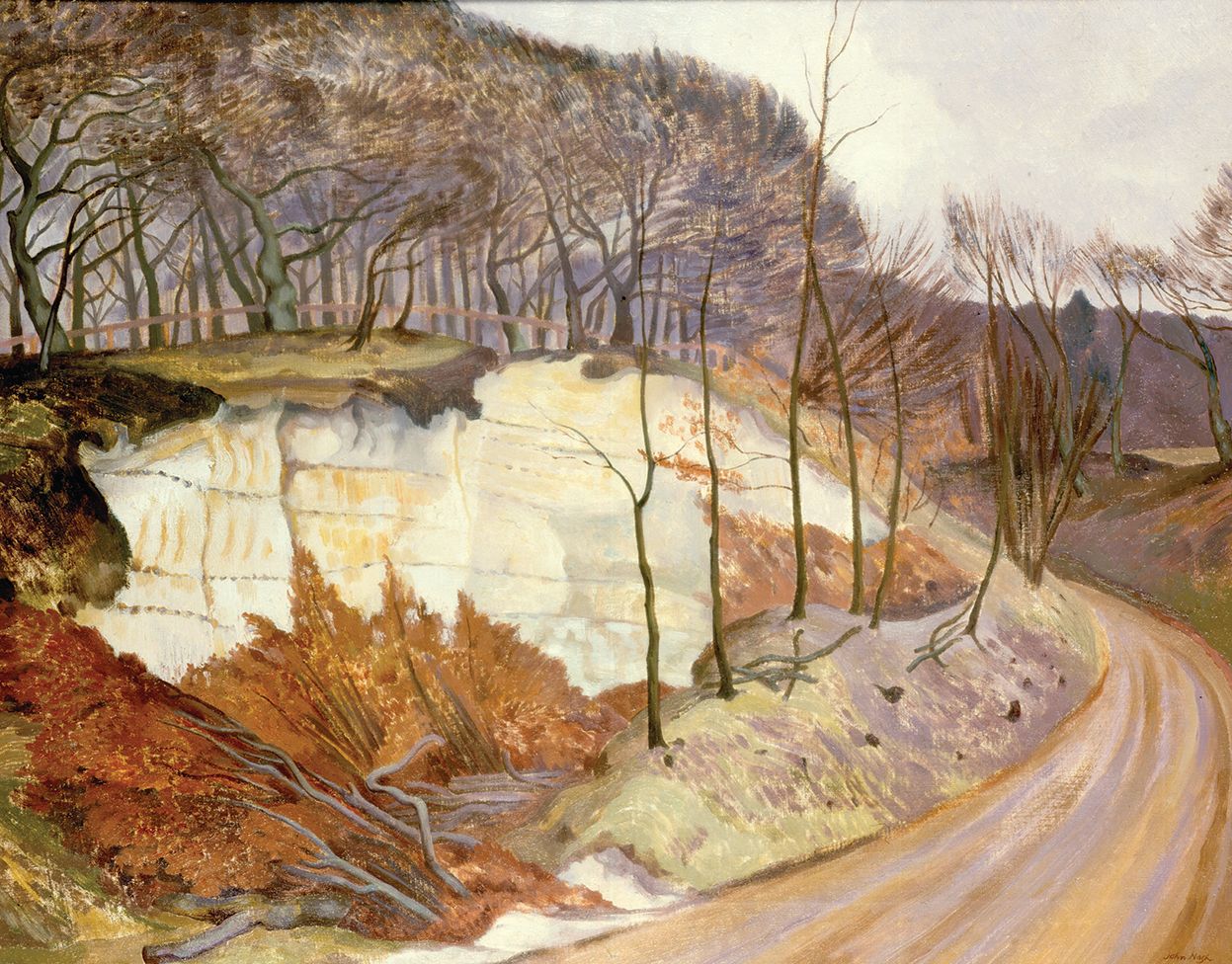 The paintings of John Nash exert a subtle fascination. Start looking, and you will notice more. Rhythms pulse across his compositions. Strange geometries are revealed by the simplification of landscape. Trees, whiskery or stout-trunked, form lattices against the light. John Nash: Artist and Countryman, the most comprehensive single-volume monograph on Nash to date, is a magnificent exploration of one artist’s dedication to landscape, and to what it means to be alive in nature.

Born in London, John Nash (1893–1977) moved at the age of eight to Iver Heath in Buckinghamshire. He recalled visits to his uncle’s house at Wallingford, with its acres of orchards, flowerbeds of salpiglossis (painted tongues or velvet trumpet flower), phlox and tobacco plants, and beyond, the Sinodun Hills culminating in the Wittenham Clumps. At school, he threw himself into botany studies. Such boyish enthusiasm for all things natural resulted in an enviable knowledge of plants—so much so that he often described his interests as “gardening, fishing and painting—in that order”. Nash was a countryman through and through, with a sensitivity to landscape that resulted in some of the finest 20th-century depictions of rural England, particularly of the Essex-Suffolk border near the River Stour, where he lived for over 30 years.

A member of the Artists Rifles, and later official war artist, Nash painted Oppy Wood and Over the Top (1918), both now in the Imperial War Museum. He was a consummate wood-engraver, illustrating 50 books ranging from the crisply monochrome Poisonous Plants (1927) to the glorious colour edition of Gilbert White’s Natural History of Selborne (1972). His watercolours, as much as his oils, seek out and celebrate often neglected corners of landscape, bringing to them an acute eye for pattern, for singularity, for contour. Why, then, is his work not better known?

One reason, as Andrew Lambirth suggests, is the “Younger Brother Syndrome”. John was the younger brother of Paul Nash, an artist renowned for his war paintings, Surrealist compositions and photographs. Paul (1889-1946) in fact discouraged his brother from attending art school, which he felt might compromise the “innocence” of his vision. But though their relationship was at times fraught, due to an inevitable overlapping of spheres and egos, it seems that both, by and large, supported each other. Lambirth deftly traces the exhibition trajectory of John Nash’s work and affiliations (among them the lesser known Cumberland Market Group), revealing friendships with Dora Carrington, Claughton Pellew, Edward Bawden, Cedric Morris, Peter Coker, and the writer Ronald Blythe, who would inherit Nash’s house. There is also a surprisingly trenchant counter-attack on Eric Ravilious, whose current appeal is diagnosed as nostalgic, his work polite and well-tended.

Such opinions are refreshing, and Lambirth is a sure-footed guide to the terrain in question. Extensive quotations from Nash bring to life an artist with an eye for the ridiculous (his comic drawings are a delight) and an unsentimental approach to landscape (“Christine took me to a waterfall & practically forced me to draw it. The water was cascading round vast boulders shaped like sultanas covered with green moss—despite the hackneyed subject I got interested”). Less welcome are a laxity of editorial control and creaky index. Although sumptuously produced, the publication lacks a numbering system for the illustrations, such that the reader is forced to triangulate between text and index to locate images. Where text and image coincide, however, the effect is magical, the descriptions vividly explicating and illuminating. This is a book to study and revisit, each time marvelling at Nash’s vision of landscape: honest, clear-sighted, yet carrying a certain strangeness—“like electricity in a high tension cable”.

• Judith LeGrove is a writer and curator specialising in 20th-century and contemporary art, who has published monographs on Geoffrey Clarke and Michael Lyons