Odd points of view and tense interior scenes feature in an exhibition of small, precious works from early in the artist's career 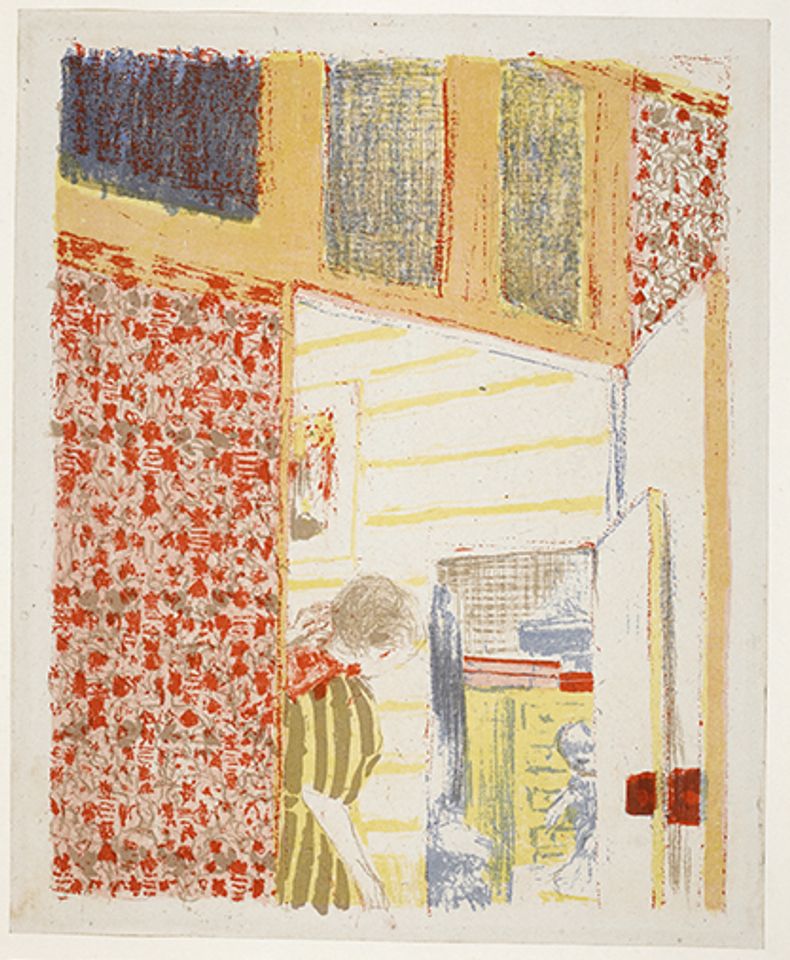 A temporary loan show should complement a museum's permanent collection, which, philosophically, is its heart and soul. A show might contextualise a great work in the collection.  It can treat a period in which the collection is strong but in which also some narrow movement is absent.  It might focus on an artist for which the collection is famous.  Some camaraderie with something is essential.  Otherwise, the show makes no sense.

It was a delight, then, to see Edouard Vuillard: the Poetry of the Everyday at the Holburne Museum in Bath, a show calibrated to the size, collection, feel, and mission of the museum in a most sophisticated way. Indeed, "intimate" is the Holburne's brand, so showing the artist who pioneered the movement called Intimisme is smart, even though Vuillard's work isn't in the collection.  Vuillard's small, richly patterned scenes—mostly interiors—sing in perfect harmony with the museum's silver, porcelain, portrait miniatures, coins, enamels and glass as well as its homey galleries.

The show, about small, precious works by Vuillard early in his career, is itself small—about thirty paintings and lithographs—and in one gallery. Many of the pictures are in private hands so in showing them the Holburne is offering its visitors a special treat.  Even the intelligent, stylish catalogue is small.

I'll dispose of Vuillard's art history with dispatch. He was one of the Nabis, Post-Impressionist, representational, and design-oriented artists like Maurice Denis, Paul Serusier, and Pierre Bonnard.  Their palette is bright and saturated with surprising, abrupt contrasts.

For them, interior decoration was a bourgeois obsession, but when isn't it? More precisely, in their day, the bourgeois aesthetic was not "less is more" or "form follows function" but "more is more"—more pattern and more stuff—and, while you're at it, add lots of frill and flounce.

Vuillard is a Nabi with a difference. He opts for odd points of views that surprise but also supply ambiguity and sometimes tension. In Woman By an Open Door from 1893, an open white door, a flat rectangle, seems gigantic, dwarfing the blob of a figure in black space, blocking part of the window, a papered wall and possibly a figure who opened the door. The door, boldly white and dead-centre, only seems to rule the room.  While it wants to gobble parts of everything else, the picture is a study of glimpses and fragments.

Vuillard's brushstrokes have this quality. They are never geometric like Cezanne's or slashing like Boldini's or Sargent's. There isn't any sense of finish, either. The show is about close looking, and that means looking at his technique.  It's a pleasurable job the Holburne rewards with perfect choices of objects, juxtapositions, lighting, and a rich blue wall colour.

Vuillard paints in dabs uneven in shape and depth, each freestanding and each like an aerial view of a tiny island. His explicit subjects—people, furniture, and decoration—might be static but these dabs of colour give the scenes a buzz. 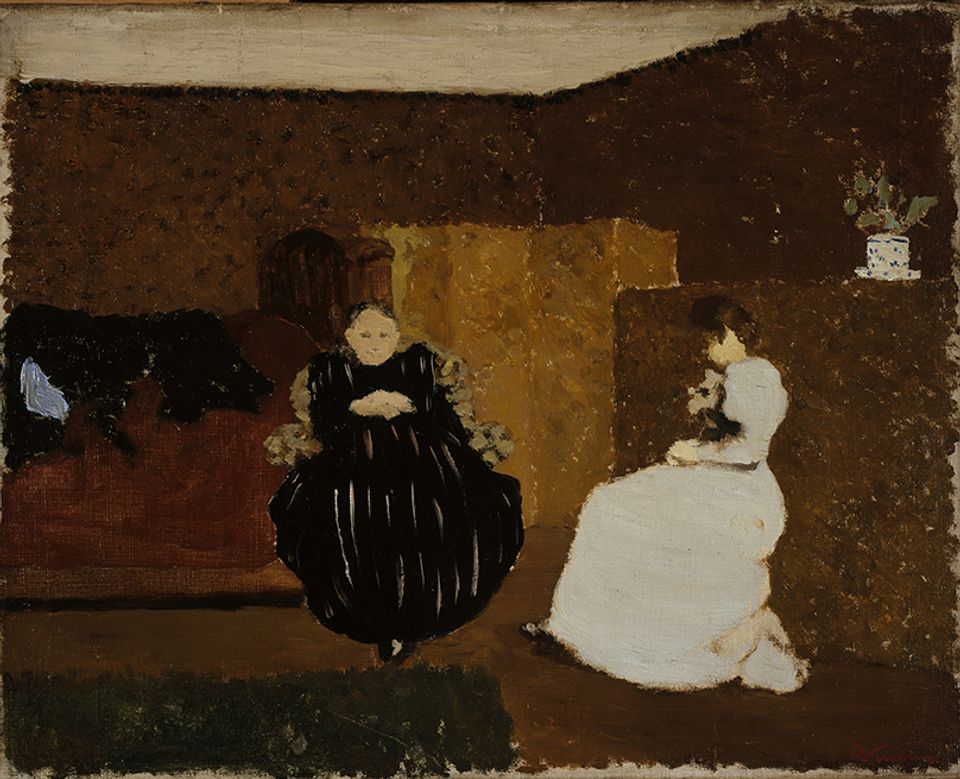 Sometimes Vuillard's angles are oblique, and this is where these pretty little things ooze tension. The Chat and The Artist's Sister with a Cup of Coffee are also from 1893.  In The Chat, Vuillard's mother and sister sit in a room where the patterned background is darkened but its angles where walls meet with each other, furniture, or the ceiling are crisp.  There are lots of aggressive points and diagonals. The sister wears white, the mother black, which makes for a contrast of opposites.  Silence reigns uneasily.

Biography counts here and it weaves in and out of the show's story. Vuillard's feuding sister and her husband lived with him and his mother at the time. To rid herself of the soon-to-split couple, Vuillard's mother moved the family to an apartment so small it would force the combatants to leave the nest.  In The Artist's Sister with a Cup of Coffee, the figure sits in a dark space, isolated from the brightness in the next room, her face half in the dark.  She looks sad and alone, as she will be before long.

The Vuillards moved a lot, seven times during the twenty-two years between the first and last domestic interior in the show. Their apartments weren't spacious and things were often crammed in tight spaces. That things were always closely quartered but never stagnant was a boon to Vuillard.

He obviously savoured the problem-solving, like painting interiors with views from one tiny, truncated room into another. Interior with Pink Wallpaper III (1899) is one of the brilliant lithographs in the show.  In this single print, Vuillard gives us three different spaces and a clash between the expanse of red patterned wallpaper and the far less cluttered but distant passages of two spaces beyond it.  The two people are diminished at the expense of inanimate wallpaper that sizzles. The show has some paintings of figures outside, too, and a couple of straightforward landscapes.  They're never open spaces, though, but awkwardly confined ones.

Vuillard's still lifes like The Candlestick (1900) are handsome takes on shapes and colours. It measures 15 by 26 inches and is one of the biggest things in the show.  Hard, flat monochromatic passages vie with densely patterned ones: a soft, rectangular, big leather bag with a tall, slender, zig-zagging brass candlestick and patterned fabric with three dimensional flowers and a blue inkwell.  It's an odd, cryptic conversation.

I'd quibble with only small things, in keeping with the miniaturist theme I seem to have developed. The show unfolds in one room so the viewer sees everything in a single sweep.  I would have placed a couple of freestanding, disruptive walls for two reasons.  They'd add a sense of seek-and-find. I think dividing the space would also complement Vuillard's subjects, which are heavy on small rooms and divided spaces.

The wall text is also quick to impose what I call "mood meanings", which are psychological readings that are either too subjective or unmindful of an artist's love for solving complex composition or colour challenges. This is the age of Whistler and Art Nouveau design.  Sometimes narrative is colour and line and nothing else.

Vuillard's domestic situation—living with his mother and never marrying—might beg amateur analysis but with Vuillard the point gets pushed too much, by lots of scholars. He was still in his twenties when he did most of the work in the show, aesthetically mature but young and possibly at his most experimental.  This is another of the show's pleasures.  It is Vuillard at his freshest.

Many of his figures, rather than people he dealt with daily, are forms. He was making pictures.  His takes on friends and exteriors are, aesthetically, not different.  Vuillard had an active social life and what some might consider an overactive, complicated love life.  Eventually, Mama dies.  He gets on with his life.

These pictures are so precious they have an Old Master feel. They're like Dutch cabinet pictures.  They're nearly devotional, too, the subjects of veneration his quirky forms and colours.  Yet this master of Intimisme lived until 1940. He's a modern man.  He designed stage sets and domestic interiors for rich friends, which together give us a sense of his talent for artifice rather than psychology.  He made lots of money painting high society portraits in the 1920s and 1930s in what I would call an Art Deco style, not sleek and shiny but keen on surface.  The Holburne show is a snapshot of an earlier time.  It coaxes Vuillard's original magic out of the bottle in captivating style.