Watch out Frieze, here comes Tefaf with its mac and cheese

Sales to the Upper East Side set may take their time at the New York fair, but they do happen and exhibitors praise its slick presentation and diverse offering 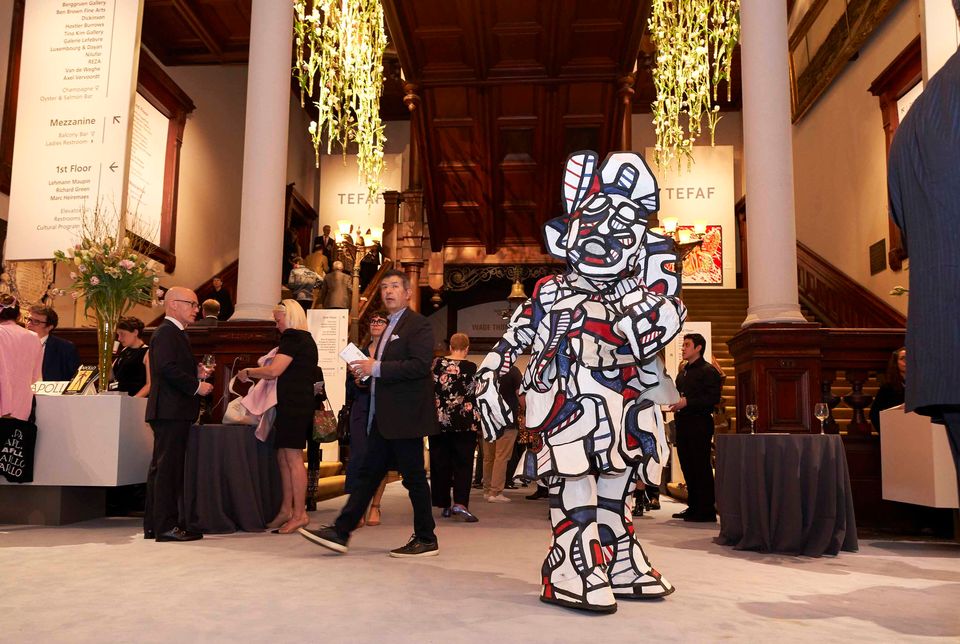 The truffle mac and cheese canapés were, quite literally, the works of art on everyone’s lips at yesterday's preview day of Tefaf New York Spring (until 5 May). And when visitors were not hunting cheesy carbs and Ruinart, they were tracking the actress Scarlett Johansson, last seen bemusedly watching the “activation” of Jean Dubuffet’s “animated painting” Coucou Bazar (courtesy of Pace).

But, canapes, celebs and Ruinart aside, this sophisticated three-year-old event in the Park Avenue Armory is a pretty good art fair too.

In Maastricht, Tefaf has been serving up its brand of tulip-heavy luxe fair to the Old Master set for decades, but this is relatively new territory for many of the contemporary art dealers who have signed up in the past two years. Used to the more Spartan aesthetic of most contemporary fairs—Frieze a case in point—these galleries and their clients appear to have got a taste for the good life of oysters and free flowing champagne.

It is curious, however, to see some of the blue-chip contemporary dealers here occupying a booth that is only the same size as the downstairs loo of their ever more cavernous warehouse spaces down in Chelsea. For instance, Pace’s entire stand of Dubuffet works (“notable sales” of which have so far ranged up to $3m at the fair) would fit in the industrial lift in its new eight floor monolith, currently under construction down on 25th Street.

For David Zwirner, the recent signing of the Paul Klee Foundation offers an ideal solution to a bijou stand—the artist’s delicate works on paper are ideal proportions for this intimate scale. Interestingly, it’s the first time the gallery has shown Klee’s work—and they are very tight-lipped on prices.

“I did the fair last year and loved it—we sold four or five pieces,” says Stephane Custot of Waddington Custot. “I like the Armory too—I’ve been exhibiting in this building for 30 years. For four or five years, New York did not have a good classic art fair, so I’m pleased that Tefaf have brought it back. The US is very important for us—50% of the gallery’s business goes to the US.”

Custot also exhibits at Frieze and as he notes “visitors here came back again and again because lots of them live nearby. At Frieze, they come just once.” Kamel Mennour on the next door stand echoes that thought—he stopped exhibiting at Frieze New York because “people only came once.” He is exhibiting for the first time at Tefaf, with a solo show of Bertrand Lavier, centred around a grand piano painted in thick glossy impasto. “I visited last year and liked the diversity—it’s a good mix of primitive and Modern art and antiquities. I think galleries are increasingly liking exhibiting at more diverse fairs,” he says. “It is a totally different crowd to Frieze.”

Whereas Frieze’s crowd is all Balenciaga Triple S comfort, here there is much teetering on Louboutins, and that’s just the men. The Armory is the pin-thin Park Avenue doyenne’s local—this is the preserve of Upper East siders who have been keeping Manhattan’s facial aestheticians in holidays in the Bahamas for the past forty years. 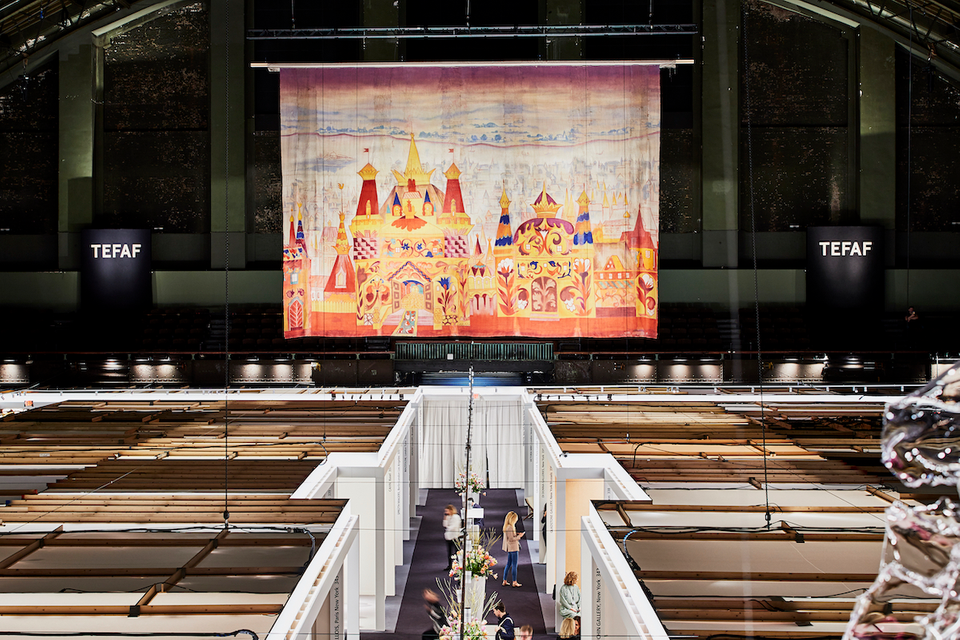 “Many of the people I saw yesterday at Frieze are here today. But I would say that 50% of the people here today will not go to Frieze,” says Michael Findlay of Acquavella Galleries. “The overlap is industry people: curators, advisors, auction house staff, journalists. Those who concentrate on 21stcentury probably wouldn’t bother coming here, but at Tefaf you get the Upper East Side neighbourhood crowd.”

But, does the gallery sell well here? “Yes. We came back this year, so that tells you something.” Findlay says. By the end of preview day, the gallery had sold Lucien Freud’s Portrait (1972) for an undisclosed price.

Perhaps because visitors return time and again, deals at Tefaf take their time. Tina Kim, standing in her downright beautiful booth in one of the historic rooms upstairs, full of Lee Ufan, Alexander Calder and Louise Bourgeois and lined with curved white velvet walls designed by the architect Adam Hyman, says of sales: “It’s happening—it’s not like things are running off the walls but we have serious interest. We normally do really well here.”

However, most of the seven Hernan Bas paintings within Lehmann Maupin’s fun “flamingo room” in one of the historic rooms were sold out by the end of preview day, with the remainder on reserve—all are priced in six figure sums, but the flamingo sculptures are still available. 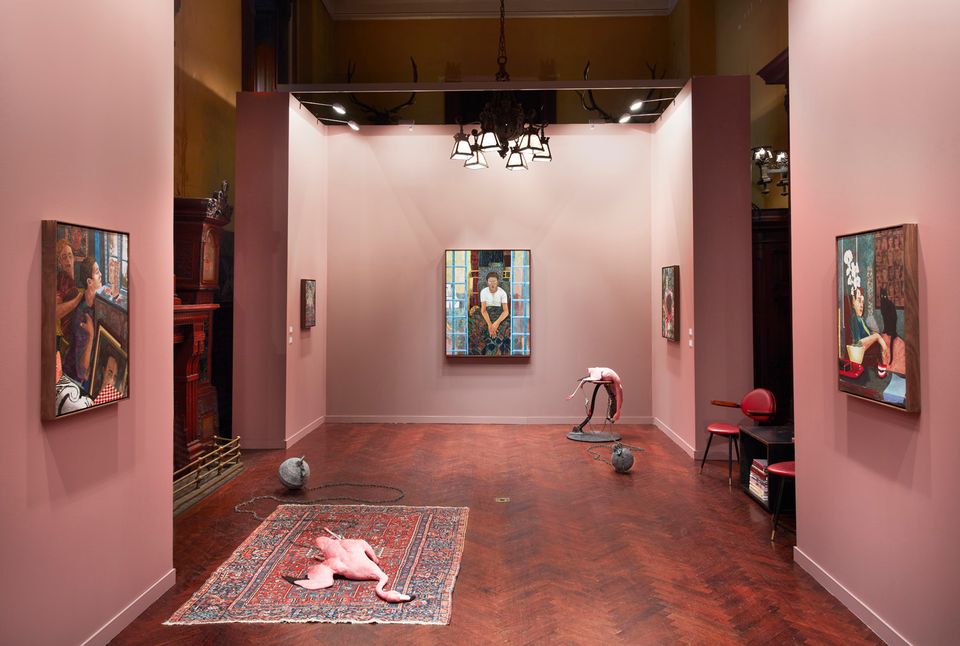 Ben Brown Fine Arts also had one of the historic rooms upstairs, full of early Gerhard Richter paintings from the 1960s and 70s (blissfully, not a squeegee painting in sight). When one client asked Brown “How did you get all this shit?” yesterday, he replied “I robbed a bank”, but the official line is that it was acquired over a number of years privately and at auction.

By yesterday afternoon, the gallery had sold one work, titled Rot-Glau-Gelb (Red Blue Yellow, 1973), and although it would not give an asking price on this work, it is somewhere in the middle of the $135,000 to $4m overall price range for the booth. Christopher Baer of the gallery says of the fair: “It’s a very professional set-up and the location is great. When it first started a few years ago, everyone was saying that the presentation puts every other fair in New York in the shade. The galleries make an effort here too.”

Luxembourg & Dayan is exhibiting for the first time in one of the historic rooms with a show of self-portraits by Modern and contemporary portraits, titled Self & Portrait. The gallery had “some sales” on preview day, although it could not give specifics as of today, says Alma Luxembourg. She praises the “level of professionalism of the organisation of the fair as well as the great attendance on the opening day.”

Galerie Thaddaeus Ropac sold out its booth of 39 works by George Baselitz within the first few hours, which sounds extraordinary until you realise it was only two deals—the first, 38 drawings from 1984 sold as a set for €1m (around $1.1m) and the second, a large-scale painting titled Blaueur Elkekopf (1979–80), which sold for an undisclosed amount.

Elsewhere, first day sales included an untitled Mario Schifano piece from 1974–75 for around $300,000 from Eykyn Maclean, and, at Tornabuoni Artem a Giorgio di Chirico painting, titled Le Muse Inquietanti (1960-62) with an asking price of $310,000.

“The crowd has been shoulder to shoulder all day, and there has been a good museum response too which we didn’t expect as it’s not a fair that is particularly known for antiquities,” said Martin Clist, the director of the London-based antiquities specialist Charles Ede. By 7pm on preview day, the gallery had sold over 10 pieces (though relatively low-value pieces at prices up to $65,000). “Last year we sold nothing on the opening day but then people come back. You never can tell.”

Watching over all of this in the Armory’s barrel-arched Drill Hall is Natalia Goncharova’s huge painting Le Coq d’Or (1914), made as a set design for Sergei Diaghilev’s Ballets Russes company. The work is being shown by Galerie Gmurzynska and, as of this afternoon, the gallery’s director Mathias Rastorfer says it is "not sold yet but there are two great museums considering the work at this moment.” The asking price is $2m.