Worth the detour: on the National Gallery's lesser-known Renaissance masterpieces 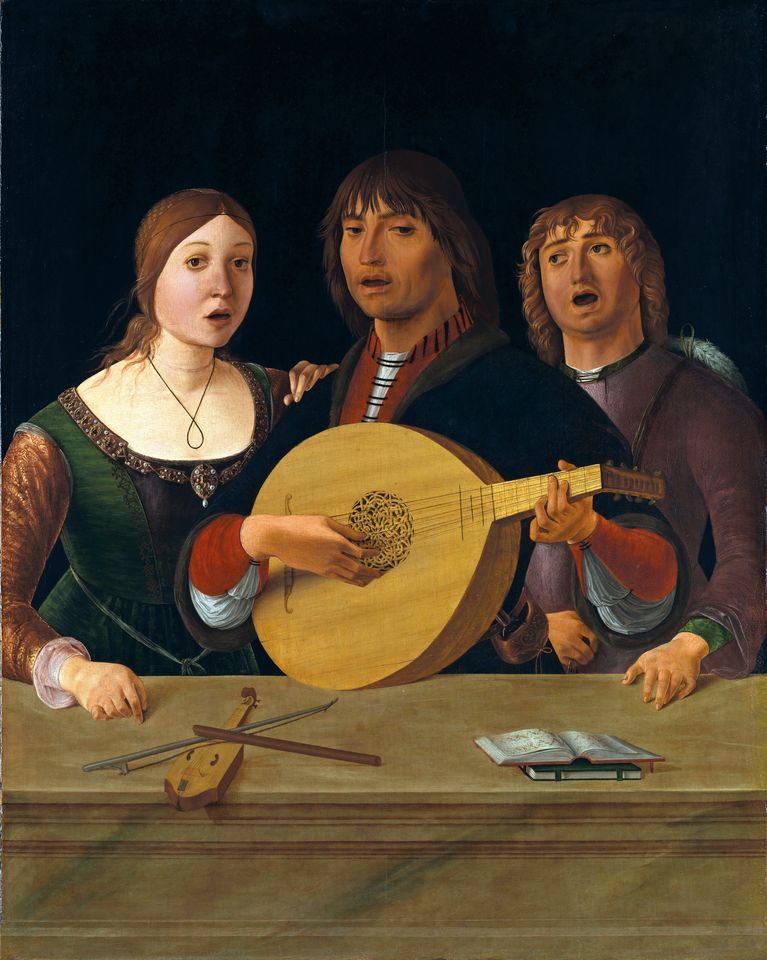 A Concert (around 1485-95) by Lorenzo Costa, a Ferrarese artist active in Bologna. It provides a nostalgic glimpse of courtly entertainment, while anticipating new directions in secular genre painting. Photo: the National Gallery, London

In his life of the Ferrarese painter Benvenuto Garofalo, published in 1568, Giorgio Vasari writes that he had wished to give a fuller account of artists from the northern regions of Italy in the first edition of his Lives of the Artists, but that he had been unable to travel to see their work in person. Subsequently, he returned to the area, where he was impressed by the merits of so many “rare and noble craftsmen”. Though often neglected by cultural pilgrims drawn to the more obvious attractions of Florence, Venice and Rome, the art of northern Italy in the 16th century is still worth revisiting.

The Sixteenth Century Italian Paintings: Volume III—Bologna and Ferrara forms part of the National Gallery’s ongoing project to recatalogue its entire collection. This latest instalment is the work of the gallery’s former director, Nicholas Penny, and Giorgia Mancini, previously a research fellow with the collection. Their scholarship is supported by the considerable expertise of the gallery’s scientific and conservation staff. The resulting entries are closely observed, meticulously researched and rich in technical information. The catalogue itself is beautifully produced and generously illustrated with colour images.

Ferrara maintained a strong cultural identity under the Este dukes, who fostered the careers of 15th-century masters such as Cosmè Tura, Francesco del Cossa and Ercole de’Roberti. Bologna’s ruling family, the Bentivoglio, were active as patrons of the arts, although their hold on power proved less secure. In 1513, after a period of political unrest and a series of assassinations, papal forces conquered the city. Ferrara also came under papal control in 1598, when it was annexed by Cardinal Pietro Aldobrandini.

Many of the artists featured in this catalogue were active across the region. Born in Ferrara, Lorenzo Costa first travelled to Bologna around 1481-82. In 1488, he completed his first major commission, four large canvases for the family chapel of Giovanni II Bentivoglio in the church of San Giacomo Maggiore.

In 1506, he settled in Mantua, where he remained until his death, succeeding Mantegna as court painter to Isabella d’Este. Costa and his workshop are well represented at the National Gallery, not least by the monumental altarpiece known as the Pala Strozzi, but it his small-scale secular paintings that really shine. His talent for capturing likenesses is palpable in the Portrait of a Man (1507-08), in which the sitter’s wry, intelligent gaze is strikingly depicted. The subject is traditionally assumed to be the Mantuan physician and poet Battista Fiera, though the catalogue expresses some doubts. The formula of animated features set against a sombre backdrop is repeated in the haunting picture known as A Concert (1485-95), in which three contemporary musicians are captured as if mid-song. The trio’s lively expressions and intertwined gestures subtly draw the viewer into the intimacy of their performance.

Dosso Dossi, another native of Ferrara, is first recorded as a painter in Mantua in 1512; according to Vasari, he was a pupil of Costa. Dosso’s style reflects the influence of Venetian painting, especially Giorgione and Titian, yet it also exhibits highly idiosyncratic elements, as demonstrated by the bold, sketchy brushstrokes and bizarrely distorted facial features that characterise his Adoration of the Kings (around 1530-42).

The Bolognese painter and goldsmith Francesco Francia was extremely popular with 19th-century audiences, who flocked to see his Buonvisi altarpiece (1511-17) after its acquisition by the gallery in June 1841. Vasari’s story of Francia’s fatal paroxysm of jealousy on viewing Raphael’s St Cecilia is a literary fantasy. However, as the National Gallery’s Lamentation over the Dead Christ (around 1510-17) reveals, Francia was clearly inspired by the compositional arrangements seen in Raphael’s drawings, and in Marcantonio Raimondi’s engravings after Raphael’s work.

Echoes of the St Cecilia altarpiece may be traced in the exquisitely rendered Saint Sebastian with Saint Roch and Saint Demetrius (around 1520) by the relatively little-known painter Ortolano. The splendidly pensive figure of St Demetrius, looking askance as he leans on his sword and covers his mouth with his hand, is a cousin to Raphael’s St Paul. The reflective surfaces of St Demetrius’s German-style fluted armour are brilliantly realised, as is the crossbow in the foreground.

After Ferrara became part of the Papal States, many works of art were transferred to Rome, where they were assimilated into the private galleries of wealthy cardinals such as Aldobrandini and Scipione Borghese. During the Napoleonic occupation, a number of these treasures were sold off, eventually finding their way from Rome to London. Their arrival in England coincided with, and helped to shape, the burgeoning taste for a so-called “primitive” aesthetic in Renaissance art. Some of these 19th-century acquisitions arrived at the gallery in altered forms. Altarpieces were ripped from their architectural settings, while fragments of larger ensembles were cut down and built up into rectangular “gallery pictures”.

A recurrent theme of this catalogue is an interest in the ways in which objects have been framed, conserved and displayed over the years. By engaging with these material histories, curators demonstrate sensitivity as to the treatment and presentation of the paintings in their care.

Changes in taste continue to influence how both scholars and the public view Renaissance art. Francia, for example, was lauded by the Victorians but his reputation later declined. The more that public institutions can invest in research, the more likely it is that these fascinating, if periodically overlooked, works of art will survive intact to speak to future generations.

• Sally Korman is an art historian specialising in the Italian Renaissance. Formerly a curatorial assistant at the National Gallery, she is the co-author, with Gabriele Finaldi, of Baroque Painting in Genoa (2002). She is currently completing a book entitled Vasari’s Other Lives