What colour is the road? David Hockney tells us to take a closer look

In behind-the-scenes footage from an award-winning documentary, the British artist talks about how it is important to really "see"

Not many people notice the colour of the road. In the mind’s eye it stays the local colour of tarmac. For David, the issue becomes an invitation to look and to ponder whether we really know what the world looks like. And it helps to paint.

David is talking about a car-ride with Marco Livingstone and Stephen Stuart-Smith. Marco is an art critic and independent curator who has written extensively on David’s work, including the first monograph on the artist; Stephen is director of Enitharmon Press. Together in 2011 they published David Hockney: My Yorkshire. 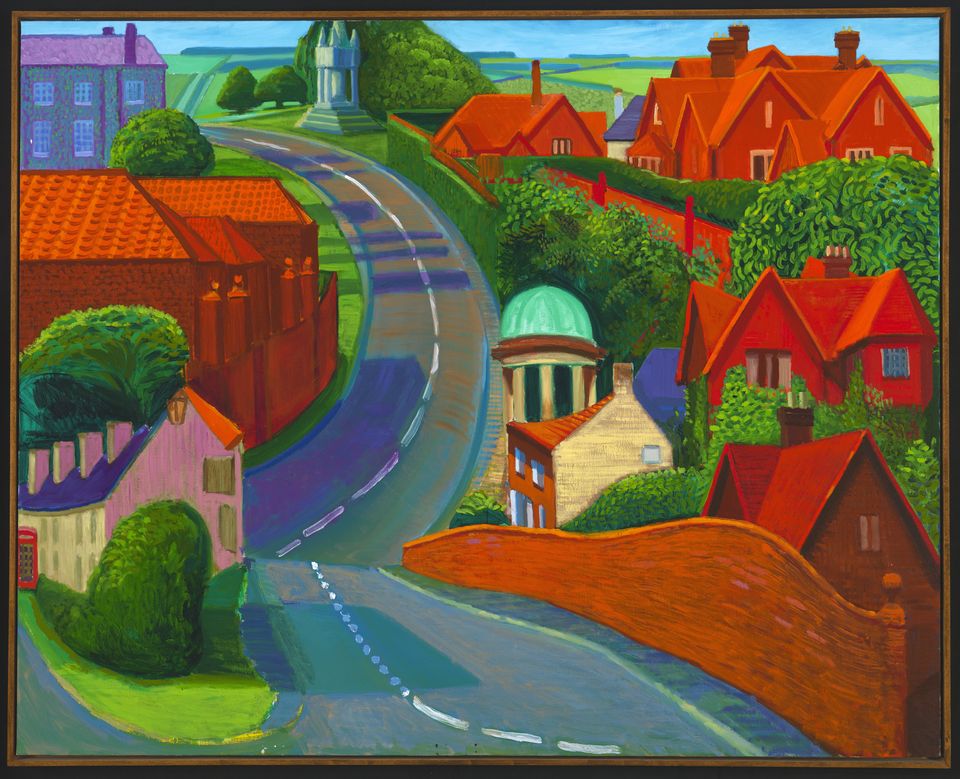 The road figures heavily in David’s return to paint his native Yorkshire, for very personal reasons to start with. His great friend Jonathan Silver—who had set up the 1853 Gallery at Salts Mill in Saltaire, just outside David’s birthplace of Bradford, exclusively to show his work—was dying. Jonathan had for years tried to persuade David to paint the landscape. When he was diagnosed with terminal cancer in the summer of 1997, David left California to be by his bedside, and would drive every day from the house in Bridlington, where his mother and sister were living, to Wetherby on the other side of York, a route that took him over Garrowby Hill. The first three Yorkshire pictures of this period describe parts of the route—The Road to York through Sledmere (1997), The Road across the Wolds (1997) and North Yorkshire (1997)—and David would bring the wet canvases to show Jonathan the progress. The fourth painting was of Salts Mill.

These Yorkshire paintings were imaginative syntheses of a car route, much like David’s marvellous California pictures of Mulholland Drive and Nichols Canyon, done in 1980. The road theme was continued on his return to California in 1998 with a large painting of Garrowby Hill (now in the Museum of Fine Arts in Boston). Marco Livingstone wrote thus in 2017: “..in The Road to York via Sledmere one feels the visceral impact of being catapulted at great speed along a road, the twists and turns of which invite comparison with a roller-coaster ride with its attendant giddy thrills. The even more vertiginous perspectives afforded by Garrowby Hill, in which distant fields many miles away are spied from the summit of a steep hill, reinforce a sense of almost airborne freedom, a release from the constraints of gravity.” Roads and tracks would then feature prominently in David’s watercolours and oils of East Yorkshire from 2003 onwards. To my eye, they give an immediacy and also a restlessness to the landscape, and when seen collectively they have the almost escapist feel of an American road movie.

At the end of the video, David talks about how we’re almost losing a sense of belonging. This was a theme he warmed to in Yorkshire, partly because of the new virtual phenomenon of cyberspace, and the connection he made to the upsurge of domestic terrorism in West Yorkshire towns near to Bradford, like Dewsbury and Batley. It injected an added urgency and relevance to his painting of the physical space of Yorkshire.

The large David Hockney watercolour at the start of the video is called Trees & Puddles. East Yorkshire. 30 III 04 (2004). It was waiting to be hung alongside the Turners at Tate Britain in the exhibition Hockney on Turner Watercolours (June 2006-February 2007).