Art Brussels and Art Cologne fairs clashed this year—which came out on top? 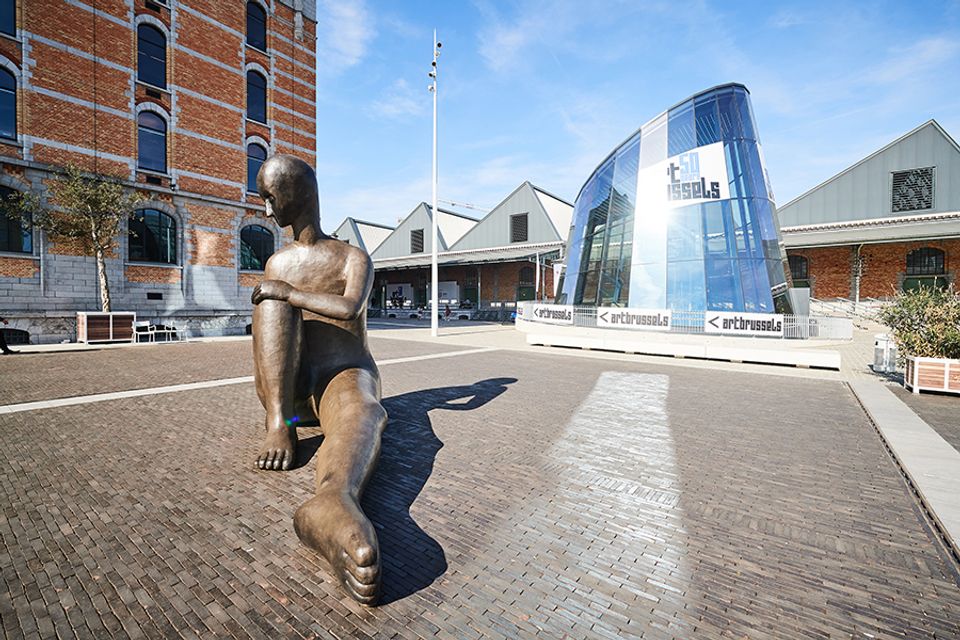 The clash between Art Cologne and Art Brussels—two of Europe’s oldest fairs for contemporary art—did not deter collectors, with dealers at both fairs reporting better sales on the first day than in previous years (the Cologne preview was Wednesday, 18 April; Brussels on Thursday, 19 April). One source of strength was the open communication of both fair directors—Art Cologne’s Daniel Hug and Art Brussels’s Anne Vierstraete—to help turn a potential liability into an asset.

“It was not a desired situation, especially for galleries”, Vierstraete told the Art Newspaper. Underscoring “the proximity and easiness of travel” between the two fairs in their messaging helped “create some momentum for this region”, with returning buyers like the Miami-based Rubells as well as new clients from Asia. Hug concurs, “I think [the communication] worked. I saw a lot more international collectors.”

Each fair also had drastically different approaches and galleries (only seven dealers did both). With 210 exhibitors, Art Cologne featured international heavyweights such as David Zwirner, Gagosian, Thaddaeus Ropac, and Hauser & Wirth, in addition to leading galleries from Germany; many works reported sold ranged in the low to mid six digits. With a blackened interior hall and a spacious new interior plaza, Art Cologne had an elegant feel on two of its floors, with the third floor featuring the more edgy and dynamic Neumarkt and Collaborations sectors. This was complimented by a playful entrance hall which featured a Las Vegas-style blue carpet with a trippy coat of arms whose ribbon contained words such as “hype”, “speed”, “cash”, designed by the Berlin-based Polish artist Zusanna Czebatul (represented at the fair by Warsaw’s Pictogram). 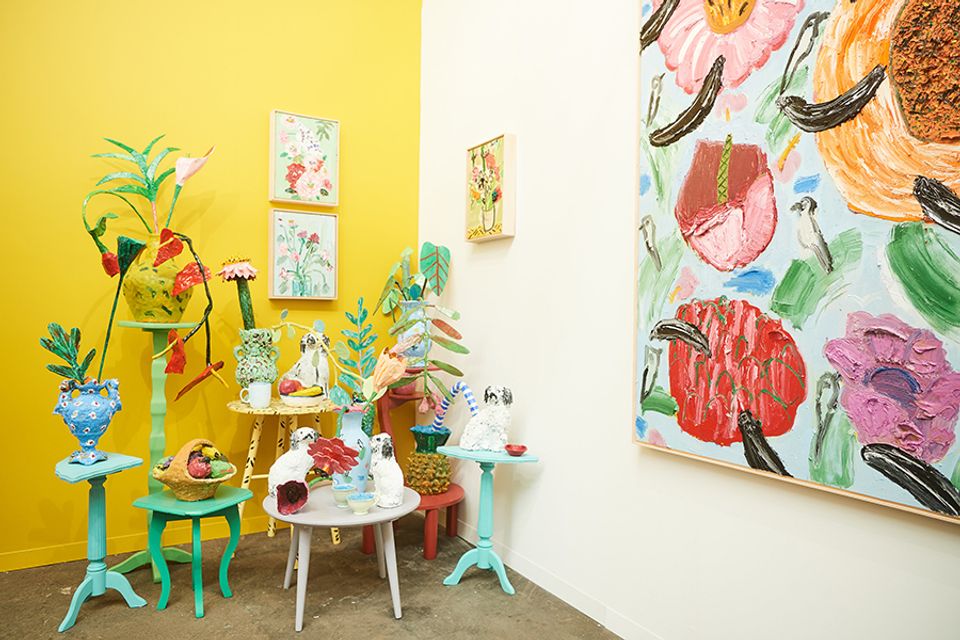 Meanwhile, Art Brussels was less blue-chip but buzzy, highlighting new and established galleries from Belgium (46 out of 147 total). Several were from Antwerp, and many showed young international artists who were selling at an upbeat pace in the €7,000-€60,000 range (with notable exceptions) in the much-admired, light-filled historic Tour and Taxis building.

Each fair boasts a loyal local collector base and the galleries catered their presentations to them. Among the standout booths at Art Brussels was the presentation by Sorry We’re Closed titled “Touch Wood”, an idiom for “get lucky”, featuring craft-based works that were made from wood or made to look like wood. Works ranged in price from €3,000 to €70,000, and on the first day works by Chris Hammerlein, Eric Croes, and Raymond Haim sold, mostly to Belgian and French collectors. “Belgians take their time. The weekend is important, many return on Sunday to buy,” the gallery’s Emilie Pischeda says. 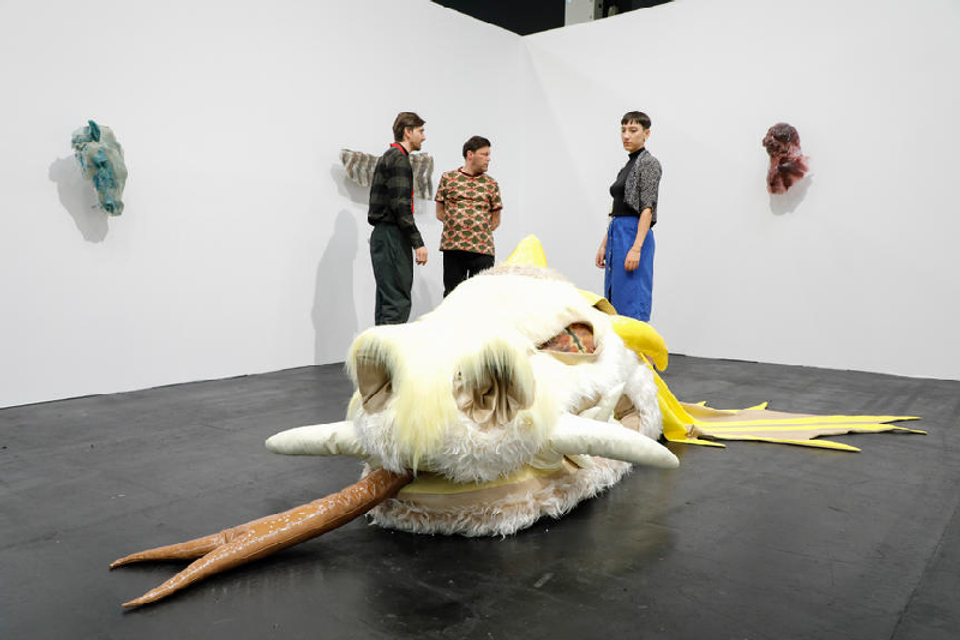 Some deals did close quickly. Galerie Templon of Paris sold a piece by Omar Ba for €35,000, as well as a work by Ivan Navarro for $125,000 as soon as the fair opened. Similarly, the five-year-old Brussels gallery Harlan Levey Projects sold a complex scientific research-based sculpture by Haseeb Ahmed to a Belgian collector for just under €10,000 within the first hour. By Sunday morning the dealer had sold works by all five artists presented in the €10,000-€15,000 range. In the Discovery sector, the two-year-old PACT gallery from Paris sold works on paper by the Italian-Venezuelan artist Manuel Scano Larrazàbal for €9,500 and a moving installation with an aluminium tank and chair by French-American artist Dorian Gaudin for €15,000.

Many galleries who had done the Independent Brussels fair—which has announced a move to November—returned for Art Brussels. Local gallery Office Baroque decided to do the fair even before Independent was moved. The gallery’s director Wim Peeters explained: “At Art Brussels there’s are real scene behind the fair. Here you have great interactions with collectors, who follow their own taste and don’t have advisors. That’s very rewarding for us.” The city has also recently welcomed a handful of international galleries—such as São Paulo’s Mendes Wood DM, which opened last year—which has added excitement, he says. His gallery sold two works by the Brazilian artist Alexandre da Cunha for an undisclosed price. 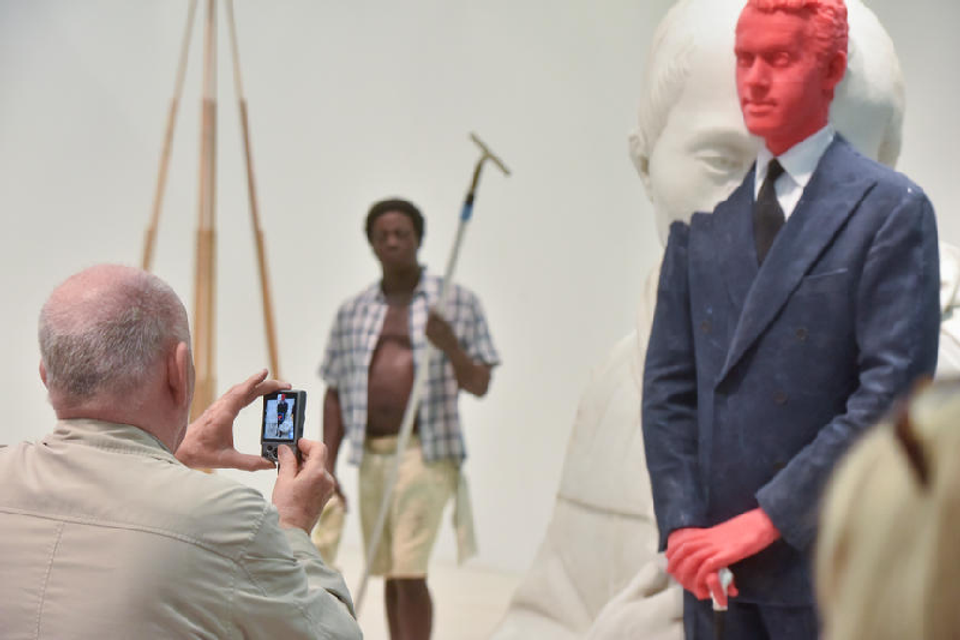 Some higher priced works also sold at the fair. Blain Southern opted to do Art Brussels for the first time because they have “a loyal following in the Brussels area who wanted us to participate.” They sold two Bill Viola works for €200,000 each, and four paintings over €80,000. They also attended Art Cologne, but did not disclose any sales.

Belgians were also on the ground at Art Cologne, says Zwirner’s James Green, who noted the presence of many important German collectors on preview day and was pleasantly surprised to see some US collectors as well. The Zwirner stand featured works ranging from €3,000 to €1.25m with a German bent, including Wolfgang Tillmans, Neo Rauch and Sigmar Polke plus a new work by Jeff Koons (who “was really keen on showing in Germany”, says Green) and a sculpture straight from Isa Genzken's studio. Meanwhile, a two-part sculpture by Genzken sold at Daniel Buccholz for €400,000, alongside works by Anne Imhof at €32,000 each.