The Art Newspaper at 30: how has art criticism changed in the digital age?

Through blogs, websites and social media, there is more writing than ever on the arts. But whether it adds meaningful insight, or just noise, is a matter of debate 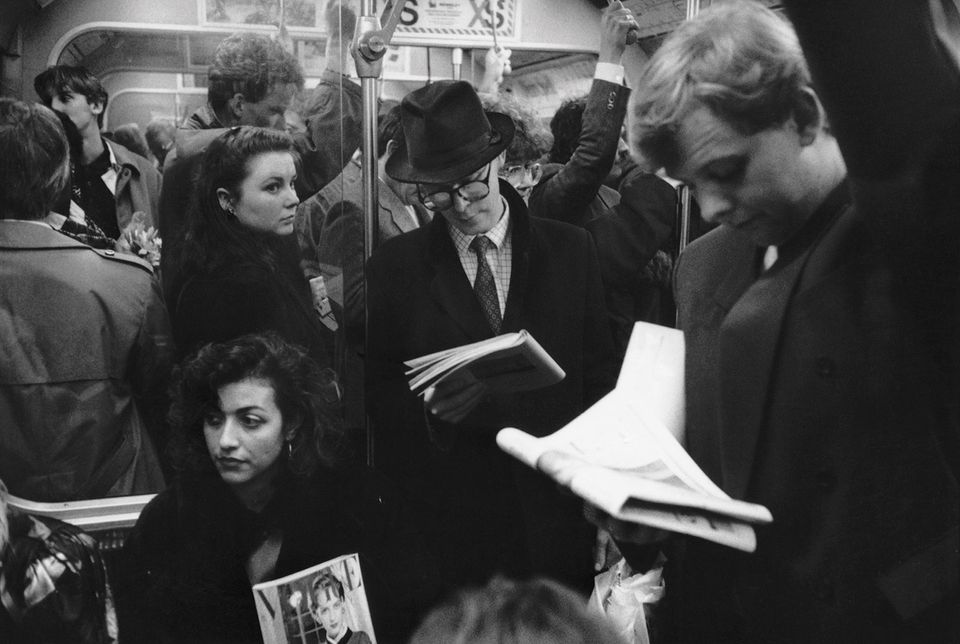 Black and white and read all over: the Underground in 1991, before screens replaced newspapers and magazines Photo: Gideon Mendel/Corbis via Getty Images

Like many art world denizens, Niru Ratnam—a London gallerist and former critic, sardonic blogger and art fair director—used to discover new art in magazines. The first one he bought was a 1994 issue of Frieze, the art journal launched by Matthew Slotover, Amanda Sharp and Tom Gidley in 1991. When asked to respond to our questions on the changes in criticism and the art media since The Art Newspaper launched 30 years ago, Ratnam returned to that magazine. Inside, an article explored nascent art on a newfangled thing called the internet. There, Ratnam found these words: “Proportionately, there are very few people with an informed interest in contemporary art; fewer of these have computers, fewer still a modem and internet connection. In Britain you could meet both of them if you hung around in [Soho café] Bar Italia for long enough.”

As Ratnam puts it: “things have changed a bit”. The internet’s effect is obviously seismic; not only do The Art Newspaper, Frieze and all the other surviving journals from 30 years ago have substantial online presences, but a host of online-only art sites—Hyperallergic and Artnet in particular—have gained prominence. Among writers and editors who have witnessed this shift, opinions about its effects are mixed. Randy Kennedy, a former New York Times arts writer, now the director of special projects at Hauser & Wirth, says that the digital revolution has led to “fewer authoritative voices on the arts in general and particularly on the visual arts”, as many arts reporters and critics have disappeared in the regional and national press. This has led, he says, to “a sense of a void in the discourse that helps keeps the art world intellectually alive and connected to the wider world”.

Jennifer Higgie, the editor-at-large at Frieze and the host of the Bow Down podcast, contends that the internet’s “transformative” effect has been “in the main positive—in terms of how art criticism has been published and disseminated”. She says: “The best thing that has happened is the acknowledgment that a balanced and representative diversity of both writers published and artists covered is essential if a magazine is to be taken seriously. The idea that art history is simply the story of white, Western men now no longer holds.”

The writer and critic Francesca Gavin argues that, partly through the rise of the internet, the art press “became much less elitist. The idea of connoisseurship seems to fade away and contemporary art became something much more central to wider cultural dialogues.”

But to what extent has there been a democratisation in art writing? In the field of design, Alice Rawsthorn, the author of Design as an Attitude, argues that, historically, “a rich history of design writing and publishing… seldom reached a wider readership”, but the internet has revolutionised discourse around the subject. “Like so many other subjects considered too esoteric to justify regular coverage in the mass media, design has benefited immensely from the latter’s decline and the emergence of countless websites, blogs and social media feeds, which interrogate different aspects of it. New writers have been able to express their takes on design and to develop distinctive critical voices.”

Kennedy suggests that the difficulty for new writers is finding platforms. “There’s no shortage of superb minds and writing voices still out there today, as you can see through even a cursory scan of Instagram, but there are ever fewer outlets for those writers to find a wide audience and to support themselves as professionals.”

The writer and broadcaster Ben Lewis, a former “happy-clappy art critic for [the London newspaper] the Evening Standard” (full disclosure: the writer of this article is a current happy-clappy critic for that newspaper), identifies a crisis in art writing as “critics get paid less and less”. He has essentially given up criticism, as art has “become a currency and critics were worth jack shit”. Why? “Firstly, the opinion of an art critic is less important than the ability of Christie’s and Sotheby’s and the galleries and collectors to sell works of art for high prices. Secondly, because the critics are paid so little it’s much easier to co-opt them.”

Online criticism is, he suggests, “just an endless stream… the same old stuff”. And the idea of the internet democratising art writing is an illusion, he says. “The real power lies, as it does elsewhere, with a tiny clique, of oligarchs and blue-chip gallery owners… It’s all about the attention economy. It’s about monetising attention, every time. It’s not about democracy, the internet—not anymore.”

Yet some commentators argue new voices are escaping the internet’s corporate gatekeepers. Ratnam agrees that “more people are following Instagram feeds than waiting for the next missive from a particular art critic” but adds: “This does make art criticism more diverse—I can’t imagine that the writers of The White Pube would have got commissioned by the traditional print magazines but I think right now they are probably more relevant to many readers than those magazines.”

The White Pube is the collaborative identity of the critics Gabrielle de la Puente and Zarina Muhammad, who publish their refreshingly irreverent writings on art and the art world on their website. Although their work began, as they describe it on their page for the crowdfunder Patreon, “as a joke back in 2015 because we hated the way art was written about (and who was getting to write about it tbh)”, they have drawn an enormous following and institutional acknowledgement: Muhammad is 2020 critic-in-residence at the Institute of Contemporary Arts in London. As accounts on their website show, The White Pube received more than £1,500 through Patreon in July 2020, and successfully launched a line of merchandise, branded “critical”. Though not yet a booming business (the duo both have other jobs), the White Pube model is about as independent as it gets. Francesca Gavin cites the London- and Los Angeles-based, Patreon-funded non-profit editorial platform AQNB as another example.

The effects of more open forums in which art reporting and criticism are discussed can be mixed. Kennedy applauds the internet’s power to provide “new ways for readers (and artists) to talk back to critics, to explain, to defend, to complain, to complicate the picture”. But Higgie bemoans the flipside: “the ease with which a critic can be attacked or trolled for their opinions. A healthy mix of debate and disagreement should be allowed to flourish without censoriousness.” Gavin says a febrile online atmosphere can affect, even inhibit, writers. “Social media and the speed with which writers are criticised is definitely impacting on what people feel they want to say in a public forum.”

How does all this affect print media? Kennedy, who in his role at Hauser & Wirth is the executive editor of the gallery’s magazine Ursula, says: “The digital revolution has opened avenues for museums and art galleries to become their own publishers in ways that were never possible before, with the ability to connect instantly to large audiences.” He adds that “it’s still too early to know how traditional arts media and in-house publishing will co-exist and what the effect will be on editorial independence”. But Ratnam argues that it is the “erosion in the idea of the critical authority of art magazines” that “leaves the door open for the market to muscle its way through impersonating old forms of critical authority” with publications such as Ursula or Gagosian Quarterly.

Meanwhile, Slotover argues that print media maintains its prestige. There is, he says, “a barrier to entry in print which means you can’t just publish anything, and that creates a perceived higher value to words in print. Print in art publications is like print in novels—the majority [of people] still seem to prefer it.” Kennedy says he remains a “print fanatic” and believes that paper and ink can continue to thrive, especially in the art world, “which shows us the unique, irreplaceable, sometimes deeply strange value of the physical object in an increasingly virtual world”.