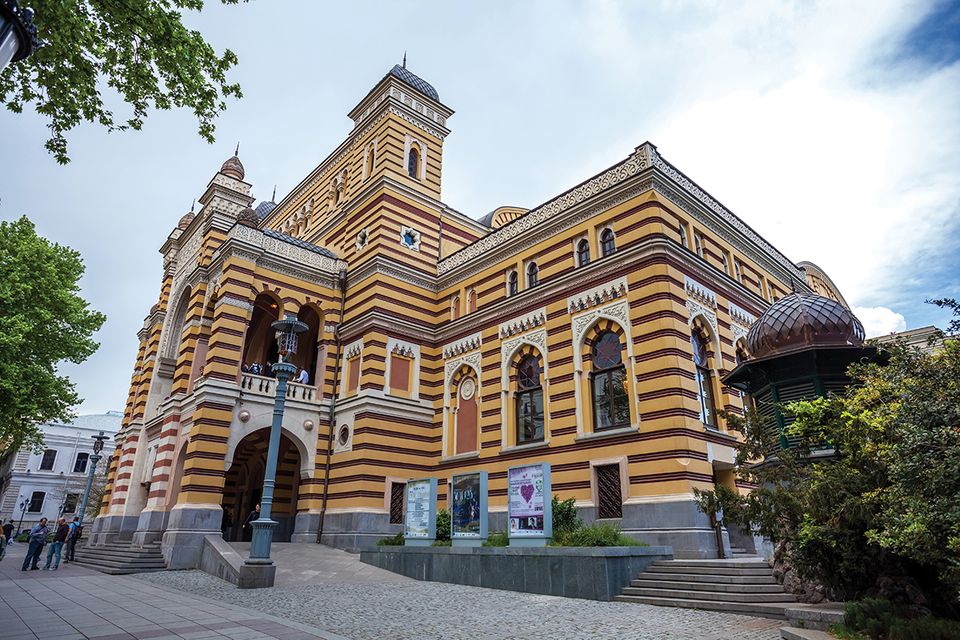 The capital of Georgia, Tbilisi, is gorgeous. It is sited on the plunging sides of river Kura, with an old town that feels Turkish or Persian, while its elegant, 19th-century main street is an Italianate boulevard. But sandwiched between Russia and Turkey, the country has been forgotten, cut off from western Europe by the long decades of communism, followed by civil war and economic misery in the 1990s. In the 19th century, however, operas used to come to Tbilisi’s Moorish-style opera house hot from their first performances in western Europe, and Tsarist Russia viewed it as its southern capital, together with Odessa.

Kaha Gvelesiani, the successful chairman of Expo Georgia, has decided to put Tbilisi back on the map, artistically speaking. But why hold an art fair in a country of fewer than five million with a GDP per capita of just $10,600? Gvelesiani says that he and his staff did the sums, which showed that it would lose money, “So we said, ‘let’s do it anyway’”.

This apparent perversity, despite long experience of making major fairs, such as the annual appointment for the region’s important wine industry, is partly due to patriotism. He believes that Georgia needs to connect with the international art scene for its artists to flourish.

But the moment is also favourable. Trade and travel between the European Union (EU) and Georgia have been frictionless since 2016/2017 due to the EU-Georgia Association Agreement, so the borders are more open now than at any time since the 19th century. And then there is the regional catchment area: Russia, Azerbaijan, Armenia and Turkey, and even the UAE, which has invested in a luxurious hotel in town. Big brother Russia, with which Georgia has an uneasy but historically close relationship, is a major player, and most of its major museums sent representatives to the opening. “We also have hundreds of young collectors here, mainly in the finance sector,” Gvelesiani says.

This has been a team effort. In 2015, he consulted with Angus Montgomery Arts, part of the group that operates trade fairs internationally, including Photofairs Shanghai, and employed Eric Schlosser, the artistic director of Art Moscow and Art Vilnius, and so the first Tbilisi Art Fair came about last month.

National and municipal government pitched in, as well as Vasili Tsereteli, the director of the Moscow Museum of Modern Art and the Museum of Modern Art Tbilisi (and grandson of one of Russia’s most famous artists and local hero, Tsurab Tsereteli). Nic Iljine, a fair board member, edited the book Memories of Tiflis, which is the first in English to tell the story of cultural life in the city in its heyday 1810 to 1920. The Russian collector and exhibition organiser, Igor Tsukanov, was also on the fair’s board. The Goethe Institut, the cultural arm of the German Foreign Office, supported the talks, while EU observers were present to assess possible backing of the next edition of the fair. Artists and galleries all over town put on pop-up shows and performances. Significantly, the exhibition Twelve Women Gone Missing was about Georgian artists who have developed their careers in the West; it is indeed hard to make your reputation if you remain in a small country.

The result was a fully-fledged art fair, with 33 galleries (15 Georgian, the rest international), a particularly interesting section with Georgian photographs, comparing vintage and new; good talks, and some excellent parties given in private homes for the artists, galleries and VIPs, with rivers of the excellent wine for which Georgia is famous. The London dealers David Juda and Anthony Reynolds, both of them enthusiastic about what they had seen and experienced, said they would send in constructive comments.

Not surprisingly, there were none of the superstar galleries, and the foreigners, such as the New York-Bulgarian dealer Stephan Stoyanov and Alfred Kornfeld from Berlin, were present largely because of personal connections, but this did not mean that the art was sub-standard. On the contrary, the quality was good and the prices seductively low, with many works priced at €2,000 to €5,000, up to €20,000. Stands in theory cost €200 per square metre, but in practice they could be had for €2,000. Despite this, Gvelesiani says, Georgia Expo, the fair operator, nearly broke even.

In the first two days of the four-day fair, there were 4,000 visitors, most of them new to such an event. “People were interested, but some did not even realise that you could buy,” said the owner of NK Gallery from Antwerp, showing two Russian artists, Kiril Chelushkin (with works around €15,000) and Tasia Korotkova (around €5,000), both technically skilled yet conceptually sophisticated.

Most stands made sales. For example, the Valid Foto BCN gallery from Barcelona sold small, exquisite landscape photographs by Masao Yamamoto for around €2,500 each; Rosa Azora gallery from Moscow sold a meticulous rebus drawing by Ivan Yazykov for $6,000, and Art Agency sold two watercolours by Tsurab Tsereteli at €20,000 each.

“It reminded me of the Basel fair in its early days,” said one collector wistfully, “when it was an event among friends.” This is sure to be the Tbilisi Art Fair’s unique selling point; it is not a huge hustling event, like Art Basel, but an opportunity to combine travel to a place of great interest, with a slower pace and art at affordable prices.